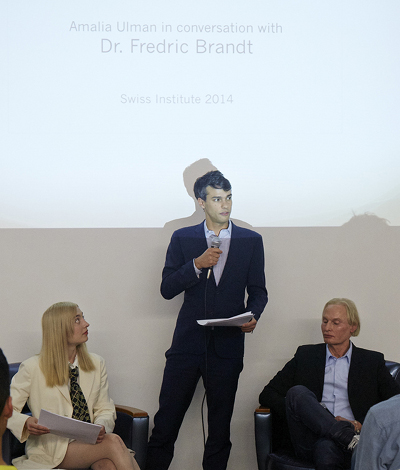 The twenty-five-year-old artist Amalia Ulman announced that she just had plastic surgery while spending time in California for her recent solo exhibition, Used & New, at LTD Los Angeles. The before-and-after pictures of her profile, projected onscreen above her, showed nearly imperceptibly minor work on her nose, straightening a slight bend. Ulman also revealed that she had Botox fillers injected under her eyes. According to comments in an Art in America interview published a day before this event, Ulman considers the eye fillers and the nose job to be art.

“We thought it was too good to be true,” said Simon Castets, director of the Swiss Institute, for his organization to pair a young artist who thrives on beauty and appearance with the world-renowned cosmetic dermatologist Fredric Brandt, famous for his contributions to the New New Face, a term used to describe his and others’ medical practice in a 2008 article in New York magazine. It was, in Castet’s words, “a match made in heaven.”

Castet introduced Ulman’s work—in photography, sculpture, and installation—as concerning value creation, wealth, game theory, and 89plus, a project on artists born in 1989 or later, on which he and the curator Hans-Ulrich Obrist work. She understands her art as analyzing class and addressing social and power relations, especially in representations of the second world—she has singled out Spain, Portugal, Italy, and Greece—through dollar/euro/pound stores as well as on lifestyle blogs such as Apartment Therapy, where it’s hard to tell if an object is well or poorly made based on a digital photograph. Ulman’s work, which deals with beauty, consumerism, and social media and takes both digital and physical forms, has been exhibited widely in solo and group exhibitions in Europe and the United States. Criticism on her is hard to find via a Google search, as writers are inclined to publish Q&A interviews with the artist rather than analyses of her work.

Amalia Ulman, before and after her recent body modifications

Born in Argentina, raised in Spain, and educated at Central Saint Martins in London, Ulman regularly posts photographs to Instagram that seem to have a gauzy soft focus like television shows from the 1960s. The whites and pale pinks in her aesthetic palette are, coincidentally or not, the same hues generally ascribed to the Caucasian race and the color of its skin. Her postinternet worldview is typical of a newer generation in which the older Marxist critiques of society do not apply, or at least not as much. Ulman has admitted to reading theory, but her work is quite different from that of Cindy Sherman and Barbara Kruger in the 1980s, and that of Nikki S. Lee and Laurel Nakadate in the late 1990s and early 2000s. Ulman’s criticality is questionable, since she’s seemingly complicit with existing power structures in supporting the elegantly bland (or blandly elegant) qualities of life. But don’t hate her because she’s beautiful.

Ulman began the evening’s conversation by reading a prepared artist’s statement from printed pages, while the audience of largely twentysomethings followed along, craning their necks to take in a projected PowerPoint presentation. Ulman recalled being introduced to art at a young age—8 to be exact—by a television program on Orlan, the artist whose career-long project is to transform herself via plastic surgery. The Australian performance artist Stelarc and the photographer David LaChapelle were also formative influences, she said. While speaking, the carefree Ulman casually tossed her just-read pages onto the floor between her and Brandt, as if she were lackadaisically scrolling a website, and asked the doctor about his work. 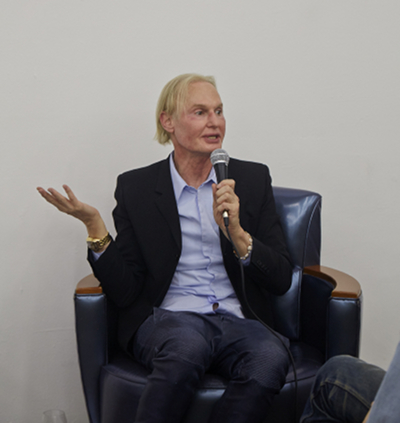 With whitish-blond hair, Brandt bore an uncanny resemblance to Andy Warhol. The sixty-four-year-old cosmetic dermatologist also possessed a face that had obviously undergone extensive work. (An article in the New York Times noted that he experiments on himself.) The old medical tools and processes such as peeling and collagen injections, Brandt said, were developed a long time ago. Collagen injections, for example, are no longer available. People in their forties and fifties made appointments with him in the old days; now he gets younger first-time clients. With the language of a benevolent, confident self-help guru, Brandt used phrases such as “subtly refreshed” and “continuity of youth” and revealed that few patients have expectations to fix an aged face. “We can improve on Mother Nature,” he professed. “I’m not going to make you look like a porn star—unless you want to.” Not many people do.

“We understand the age and face better,” Brandt said, saying how doctors can separate and empty fat pockets to affect the reflection of light. His clients “don’t want to look young” but instead “don’t want to look tired.” Besides feeling better, they also express a desire to “extend their life in the workforce,” an honorable motive that may not do enough to combat institutional or structural biases against older employees. Making a distinction between a person’s chronological age and his or her biological age, Brandt encourages his patients improve their looks for themselves, not for their husbands—the implication here that women, not men, receive treatment from him. Brandt made two points I agree with: that people shouldn’t impose their beliefs on others, and that you should criticize yourself before criticizing others.

“Botox is the most amazing drug that came along in the mid-nineties,” Brandt continued what essentially had become a monologue, “and it really changed the course of cosmetic dermatology.” Botox replaced collagen injections and works by shrinking lines, lifting the eyebrows, and changing the shape of the face, he said. Is it all necessary? “People come in and they’ll point out these flaws in themselves that nobody can see. And I say, ‘I can fix that little scar or line but that’s not going to affect your appearance to anybody else but yourself.’” Brandt points out other areas for work—he called it educating his patients—that could improve their face, making them beautiful.

Putting science aside, Brandt talked about other matters, such as routine. He does yoga. “I do have a spiritual side,” he said. What about diet, Ulman asked the doctor. He minimizes sugar intake and doesn’t east red meat, which has inflammatory qualities that can accelerate aging. And because he is gluten free, he avoids filling up on bread when dining at restaurants.

Although Brandt stopped short of calling himself an artist, he strongly emphasized the aesthetic nature of his work and touted his great eye for facial improvements, citing the golden ratio and the rule of thirds as tools in his kit. His instincts are so refined, he bragged, that he can look at someone and know exactly how make them look better. The face, Brandt said later in the talk, is a painting that he creates. 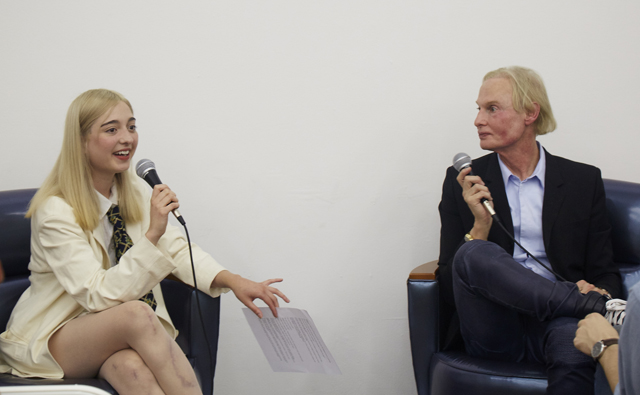 Ulman and Brandt briefly discussed insurance issues, with the doctor favoring private-pay systems and urging healthcare companies to stay out of plastic surgery and cosmetic dermatology, which would introduce chaos and make costs skyrocket. In an interview in Kaleidoscope, Ulman expressed interest in getting Korean plastic surgery, which I understood to mean that she wanted to look more Asian. She prodded Brandt to talk about “corrective” surgery for Asians to look more Western, but the doctor didn’t bite, though he did acknowledge that Asians may desire a Western-looking eye. What about patients who don’t really need work, Ulman asked. “Your perception of yourself is the hardest thing to change,” he responded. Brandt also emphasized that his work is reversible: “If you don’t like it, it goes away.”

During the audience Q&A, someone brought up Michael Jackson, who Brandt said was “a very extreme transformation.” “You can’t have ten rhinoplasties,” snipped the doctor, “and expect your nose to look good.” Where does the desire for change come from, someone else asked. “Within us there’s an innate sense to want to look good,” he answered, which for him explains why things like mirrors and hair salons exist in our world. The role of the media, he continued, is to educate, to provide tools and information on procedures that weren’t available twenty years ago. “Obviously the media, all the images out there affect you, but they’re educating you, and probably … it’s not like they’re forcing you [to do] anything you didn’t want to do. They’re reinforcing your own thoughts of what can be done.”

A young man in the audience described how the technology for antilock brakes, originally developed for Formula One racing cars, has become a standard feature for even the cheapest car. Has social good, he asked, come from Brandt’s work? Obviously prepared, the doctor said that scars, accidents, and birth defects all benefit from reparative surgery. Botox, he said, helps with migraines, bladder dysfunctions, prostate problems, and eye spasms. (Remember that Viagra was developed to alleviate symptoms of pulmonary arterial hypertension.) Someone else asked about new and old standards of beauty. Brandt wants to democratize beauty: “We’re taking typical standards of beauty and applying them to more people … like photocopies.” But at the same time, he said, “I would hate for every one of my patients to look the same.”

A noted collector of contemporary art, Brandt first acquired a Monochromatic Joke painting by Richard Prince—the one about the psychiatrist stealing his patient’s act—in the 1980s. He also owns one of Yayoi Kusama’s white Infinity Net paintings, which he described as “ethereal.” Brandt enjoys how John Baldessari masks the identity of people in his artworks with colored dots, changing our perception of their faces. In sum, he said that he like feel-good art.

It was odd that Brandt showed no interest in Ulman’s work, not even asking her once about her own practice. At one point she even asked him “What do you think of my nose?” and he responded with “I think you’re a pretty woman,” eventually conceding with “Good, it looks good.” I was amused with how one narcissist out-narcissized the other. What was even more surprising, though, was the dull affect of the audience throughout the event. I expected the crowd to be, by default, deeply skeptical of Brandt’s line of work, with its impossible standards of beauty and synthetic body transformation by a wealthy elite. (What, with all the concern over genetically modified foods and an obsession with all things organic and artisanal.) Then I realized that’s the old way of thinking. Lifestyle drugs and unnecessary medical surgery are more popular than ever and much less controversial than in the past. Plastic surgery and cosmetic dermatology, as common and unobtrusive as wearing contact lenses, are no longer garish procedures, if handled by the right doctors; they also allow people to happily and blissfully maintain their personal brand. Who could possibly object to that?