Stick to Your Gunns 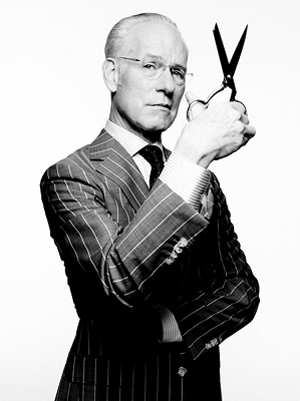 Tim Gunn with suit and scissors

When Tim Gunn was writing his first book, Tim Gunn: A Guide to Quality, Taste, and Style (2007), the designer Diane von Furstenberg told him to never lose his voice as an educator. Gunn, a fashion consultant and the cohost of the television program Project Runway, had been struggling with the assignment of writing a self-help, makeover-oriented book instead of a history of fashion, which he originally wanted to do. He hated books about dressing and body types. Gunn must have taken the advice he often gives to others—trust your gut and your instincts and know who you are—and he pulled through. In other words, he made it work.

Mentoring and education describe not only Gunn’s role on Project Runway and its spinoff show, Under the Gunn; they also form the bedrock of his entire career. During a freewheeling conversation at the Brooklyn Museum with Valerie Steele, a pioneer of fashion studies, director and chief curator of the Museum at the Fashion Institute of Technology (FIT), and the owner of a Akris handbag (which sat by her chair onstage), Gunn recalled how he arrived in New York in the early 1980s to teach at Parson’s School of Fashion. From then until 2007 he “wore a lot of hats,” he said, serving as a teacher, chair, and associate dean. Because the school’s administration didn’t want students to be influenced by anything—an inexplicable position in a highly diverse, interdisciplinary creative field—Parsons offered neither courses in fashion history nor classes in computer design until the late 1990s, when Gunn helped to rewrite the program’s curriculum and change the institutional culture, which hadn’t deviated much in over forty years. At the time, he noted, designers such as Donna Karan, Ralph Lauren, and Calvin Klein had dominated American fashion. Adventurous students must have been starving to innovate, and Gunn helped them burst their seams.

Steele asked Gunn how he liked the Jean-Paul Gaultier show at the Brooklyn Museum. Gunn delighted in the fine line between fashion and costume, the freaky mannequins, and the sensory enticement (which, he noted, stopped short of sensory assault). Gunn quizzed Steele about her most recent exhibition at the Museum at FIT, A Queer History of Fashion: From the Closet to the Catwalk, finding it surprising that no one had done a “gays in fashion” show before. Steele talked about the show’s website, Facebook page, and syllabi for audiences and then relayed a story about giving a talk in Saint Petersburg, Russia, where she was told to not speak on gay propaganda. (Her son laughed, saying “You’ll be in jail next to Pussy Riot”; Steele will “hold out for vodka and caviar” instead of bread and water.) Gunn laughed, “If you’re [a man] in the fashion industry, I’m going to assume you’re gay unless told otherwise.” Steele had a full house for her talk in Russia.

Tim Gunn and Valerie Steele (photograph by the Brooklyn Museum)

Gunn and Steele’s conversation moved quickly. The rapport between Gunn and Steele was loose and friendly, as if they’ve known each other for years. Sometimes the jokes felt scripted, as if the conversation were taking place on a minimally rehearsed television talk show for which the two played both the host and the guest. Steele editorialized on the trouble of fast fashion: the speed at which trends move from the catwalk to retails stores such as H&M, Forever 21, and Zara. She also declared Fashion Week, during which high-end designers debut their collections, to be dated. Gunn agreed that the event, which is held multiple times a year around the world, is a “dusty anachronism.” Steele would love a turn toward slow fashion, like the trend of slow food, which takes advantage of regional and seasonal varieties of ingredients and their traditional preparation. Gunn noted that we don’t want junk but are still budget minded. After Steele complimented him on his suit, he recommended Suit Supply—“it sounds like Dress Barn,” he said, but is a Dutch company found throughout Europe that makes quality clothes (and that also just opened a store in SoHo). 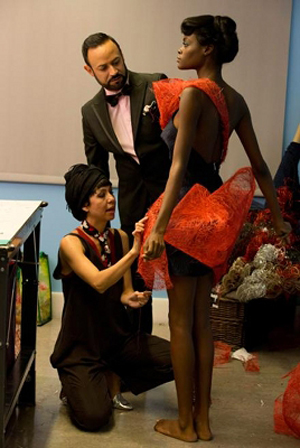 Scene from episode four of Under the Gunn

Gunn begged the audience to watch Under the Gunn, which he described as “Project Runway meets The Voice with scissors,” in order to boost the lower-than-expected ratings. The program cast the latest batch of applicants from Project Runway, which is on hiatus due to the cohost Heidi Klum’s absence. “We have way more content for a one-hour show,” he said. His “world-class problem” is: “What story do you tell?” His advice for the emerging designers runs from warning them about the difficulties of creating menswear to not scrapping a project if something goes wrong. When you quit, he implored, “What have you learned?” Gunn encourages the participants to diagnose the problem and prescribe a solution—which is worlds apart from how the art world fetishizes failure. Learning damage control, he urged, is essential.

After about thirty minutes of conversation, Gunn and Steele answered prewritten questions from the audience, which covered Brooklyn as brand, three-dimensional printing technology for fashion, and fashion icons from the last ten to fifteen years.1 Steele said Daphne Guinness; Gunn picked Helen Mirren, Cate Blanchett, and Anne Hathaway. What has been the most transformative era in fashion? Gunn and Steele agreed on the 1960s right away. From Mad Men styles to paper dresses to vinyl to hippies, that decade, Steele informed us, was the most important for clothing. What country has the most captivating fashion? “France!” exclaimed Steele. “Come on, people!” Gunn agreed but declared “We owe great menswear to London.” And Naples, Steele added.

Someone asked if we can bring back manufacturing to the United States. If that happens, Steele said, people should expect to pay more for those fashion, warning us that we won’t find those $30 jackets anymore. “We’ve created this problem,” Gunn said, blaming the culture of sales, which I took to mean high-low pricing strategies, where the original, sale, and clearance prices of a garment are considered in advance. He, too, would like to see a revitalized Garment District in Manhattan. 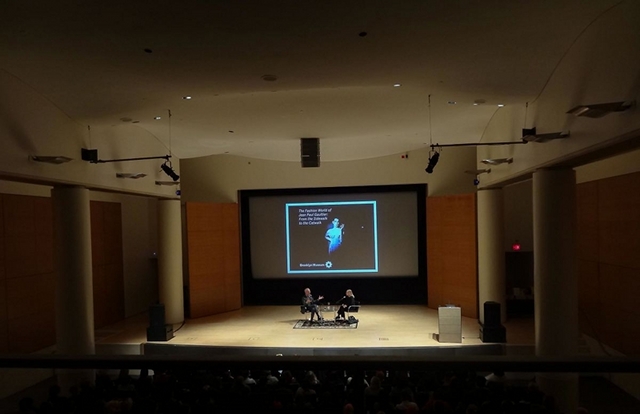 Gunn acknowledged Parsons as his greatest success, and his most defining failure was the end of his long-term relationship in 1982. He was cheated on and dumped, experiences that saved his life and made him who he is today. A thoughtful question asked how young designers with limited resources can break into high fashion. “You know what’s harder?” Gunn mused. “Staying in.” He suggested that young designers work for another, more established designer—like Donna Karan worked for Anne Klein before her own career took off—to find opportunities and to learn about sourcing production, marketing, and buyers. Steele said that most failed designers are undercapitalized. The days when four clients could support a couture house, which happened in the 1920s, she said, are over. Gunn reminded us, “The fashion world is very unforgiving.” Adding to Gunn’s suggestion, Steele recommended that a young designer should find a “posse” to work with: a photographer, a make-up artist, a hair stylist, and the like, but stopped short of calling for collective labor practices. 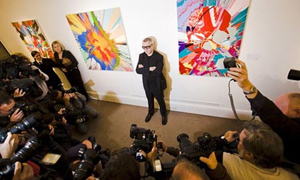 Gunn called out retailers for moving in directions that would squeeze out designers. A store like Macy’s may eventually dissolve brand names, he predicted, and create a private label—it’s cheaper for a retailer to design, create, and sell clothes in house.2 The work of designers wouldn’t disappear from the department store, he continued, but would rent space in them. This latter idea resembles in part the model for art fairs, which typically rent space in convention centers and other large public venues for commercial events to individual galleries, who sell works from their stable of artists. Using Gunn’s forecast, it would not be inconceivable for art fairs to begin representing—or more specifically, selling the work of—artists, cutting out the middle-man dealers entirely, not unlike how Damien Hirst circumvented galleries and dealers to peddle his wares directly with the auction house Sotheby’s, in 2008.

Unlike painting, sculpture, and photography, clothing designs cannot be copyrighted, which situates fashion designers in a precarious position in which knock-offs plague the high-end market. Advocating a Design Piracy Prohibition Act on Capitol Hill, Gunn believed, might help slow down fast fashion, preventing retail supply chains from replicating haute couture in down-market stores. Yet Americans are a nation of copiers, he said, borrowing looks from French styles through World War II. A bill would “grandfather out” all current design, such as von Furstenberg’s wrap dresses, but I’m not sure if he meant that iconic designs would fall under copyright or be released into the public domain. Another pressing issue, he continued, is counterfeits: a single Asian factory will manufacture a blue Liz Claiborne bag and ship it on the same boat to American as the same purse without the label, each having different destinations. Whether the problem is with trademarks or with identical products sold for radically different prices, he didn’t say. The art world also has issues with authenticity and reproduction that are too numerous to enumerate here.

1 During her introduction of the event Lisa Small, coordinating curator of The Fashion World of Jean Paul Gaultier: From the Sidewalk to the Catwalk, asked the audience to write their questions for the speakers on small cards, which were then collected and read to Gunn and Steele. Moderators who wish to upgrade the quality of their Q&A sessions—and eliminate the contribution of panel attendees who ramble for five or ten minutes before ending with the dreaded confession of “I guess that’s more of a comment than a question”—should begin this practice

2 In an exact quote, Gunn said, “I predict that with a huge, gigantic store like Macy’s, you’re going to see all of the individual designer brands disappear, the whole place is going to be privately owned. It’ll all be designed internally and you will see the private brands return.” David Bologna, “Tim Gunn, Valerie Steele Together in Conversation at Brooklyn Museum,” Washington Square News, January 31, 2014.