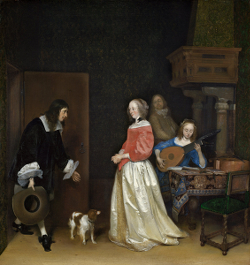 The internet was once the “meat market for the undatable,” said the journalist Erica Lumière. Now, meeting people online for dating and sex has nearly become completely normalized in American culture. Which is good news, especially for couples who no longer must make excuses for how they met—“at a party,” “through mutual friends,” or something of the sort—and just say “on OKCupid” without feeling ashamed. In fact, men and women older than fifty is the largest growing segment of online dating (and the market cornered by a company called Our Time).

The three speakers on the panel “Love, Sex, and Dating in the Digital Age,” hosted by the French Institute Alliance Française and moderated by Lumière, offered their experiences as writers, researchers, and professors—and as advocates—and the ensuing discussion culminated in agreement over a moderate, thoughtful approach to modern romance that originates on the web.1

Lumière began the conversation with a few statistics: one out of ten people have used a dating site or app; 66 percent of those users go on a date; and 23 percent of them have met a spouse or started a long-term relationship via the internet. Harry Reis, a professor of psychology at the University of Rochester, praised the unprecedented opportunities we have to meet potential romantic partners, with large cities offering hundreds to thousands of people. But, he warned, a dating website is “only a good tool if you know how to use it.” Backed with statistics from Match.com’s annual Singles in America survey report, the biological anthropologist Helen Fisher said that cognitive overload is the biggest problem and that users can become overwhelmed with choices, overweighing trivial aspects of a person’s looks, dress, interests, and personality, gleaned from a person’s profile, at the expense of finding common ground.2 Don’t use a check-off strategy, Reis and Fisher both recommended. My question is, does anyone consider those endless lists of favorite movies, bands, and books that people put in their profiles to be helpful criteria?

The experience Daniel Jones brought to the panel wasn’t scientific but literary—he is a writer and the editor of the New York Times column Modern Love, for which ordinary people contribute personal essays about their relationships. Dating sites put you in the driver’s seat, “looking for the ideal person,” he said, but you’re thrown into the sea with an “illusion of control.” Sometimes opposites—whether that’s differences in income, religion, politics, or smoking preferences—really do attract. In short, he advised, don’t be too strict with your imagined ideal.

The sexperts, from left: Daniel Jones, Hellen Fisher, and Harry Reis, with the moderator Erica Lumière at right

Fisher agreed: the algorithms work of dating websites work, but having a common background—which can be social values, good looks, or the same reproductive goals—is also important. “I don’t think they’re dating services.” Fisher continued. “I think they’re introducing services.” These websites are “changing courtship,” she said, “but [they’re] not changing love.”3 Connections happen in real life, Reis emphasized again. A prospective car buyer can read Consumer Reports cover to cover, his analogy went, but he or she must take a test drive before making a decision. Fisher nodded, stating that 35 percent of people fall in love “down the road,” not instantly, so patience is a virtue for anyone behind the wheel. There’s a joke about rocks songs about cars and girls in here somewhere.

Many have declared that technology has killed romance. Jones recounted a story of a woman in Washington, DC, who Googled her date before meeting him. Because she “was able to excavate his entire personal life, and family life, all in advance of the date,” their conversation suffered from stunted communications and even led to an embarrassing mistake: she mentioned his sister before he said he had one. Yet 29 percent of internet users, Lumière stated, have looked up the person they are dating, or are going to date, online. Fisher had different statistics—38 percent of men and 53 percent of women have researched a date on Google and Facebook—and with safety and curiosity in mind and with different statistics said, “I don’t know why 100 percent don’t.” Besides, she explained, from hunter-gatherer era to the small towns of yore, many people already knew the family of the people with whom they might partner. This idea spurred Jones to assert that we’ve experienced a sea change of people dating strangers, especially in larger cities like New York and Chicago. Dating strangers inherently creates suspicion, the panelists concurred, so it’s sensible that a person conduct research in advance. And no, it’s not stalking.

Technology doesn’t protect people from getting hurt, Jones said. Considering hookup culture (i.e., sex without commitment) in 2008, he observed that things go tragically wrong when the emotional involvement becomes imbalanced. There’s an understanding between partners when hooking up, he said, but “the rules aren’t posted in the dorm walls.” When hooking up, kids feel vulnerable but cannot act vulnerable. On the positive side, the panelists agreed noted that people’s sexual needs are being met this way, despite the anxiety hooking up might cause. Fisher even revealed that 35 percent of one night stands and 47 percent of friends with benefits turn into long-term relationships. The rules are developing now, she said, just like they were developing in other ways a hundred years ago. Later, during the Q&A, an audience member felt that hooking up takes time away from working on a core relationship, but Reis has observed that emotion flows plentifully in hookups, that “it’s following some different norms, to be sure,” and not necessarily a linear courtship progression. Jones, however, has witnessed people struggling with such arrangements but offered the idea that they’re practicing pieces of relationships. Sometimes dealing with a whole relationship while too young, he suggested, can damage a younger person.

Daniel Jones (left) offered his experience as a writer and editor

The panelists discussed long-distance relationships that develop online between people who have never met face to face. “It’s completely liberating,” Jones said, and “The flirtation is intense.” The risk for vulnerability is low, he continued, but foibles may develop, such as when one couple worked up to Skyping naked but still preferred typing to speaking. Another couple would fall asleep together online, Jones recalled, but the relationship failed after she drove from Missouri to New York. In real life they were bored by each other and could only get their emotional fix through their electronic devices. Lumière asked if these online relationships can work. “I would say ultimately not,” responded Reis, who again endorsed the primacy of flesh-and-blood connections.

Deception is built into technology, Jones said. Since people regularly fudge their income, height, weight, and age in their online profiles, he wondered, how should an honest person act when everyone else is enhancing their image? Others might think a person who genuinely lists himself as 45 year old is actually 50, or a 180-pound person actually weighs 200. “Lying and cheating are hardly new inventions,” responded Reis, and the opportunities to both cheat and detect cheating are relatively equal. “It’s a bit of an arms race,” he observed. Jones believes that Facebook helps reignite old flames, but often you’re seeing someone’s curated life, not their actual life, and therefore illusions can develop. What’s more, he said, you must work harder to block people from your life online. Fisher asserted the notion that if you’re not predisposed to cheat, you probably won’t cheat. Dating sites, she concluded, don’t change brain chemistry and personality. After a few weeks, Reis added, you generally know who a person is—unless he or she is a pathological liar.

One study, Lumière noted, found that internet marriages are three to four times more likely to end in divorce, but Reiss asserted the opposite: “The right science has not been done to answer that question.” People don’t sacrifice their career for a relationship anymore, he continued, which is a positive development, and women need not follow their partners around the country or be told where to attend graduate school. Further, people may now split up romantically and separate geographically but stay together emotionally, which Reis said could develop into a new kind of relationship. Ever ready with her statistics, Fisher stated that 81 percent of lifelong partners would marry the same person again, and 76 percent are still in love with him or her. Now we choose for ourselves, often later in life, and leave bad relationships more readily.

Regarding genders, Reis claimed that the similarities between men and women overwhelm the differences. Thus, the perception that single men only want sex, that married men pretend to be single want sex, and that women seek long-term relationships isn’t accurate. Based on her figures, Fisher even proposed that men are more romantic, fall in love easier, suggest moving in together sooner, and want to introduce family members earlier. Men are also more likely to commit suicide, she added, after a romantic snub. Reis stated, again, that there’s no information you can put online that’s better than what you’ll learn from meeting in person. The better dating sites, he said, tell you who is in your geographic area.

The evening’s conversation completely avoided racial preferences, which were brought up in a 2013 report on interracial communications on a single Facebook-based dating site, Are You Interested. A few findings: black women are the least likely to be contacted, Asian women were the most pursued, and most women wrote to white men. OkCupid found similar results in 2009, including the fact that approximately two out of three whites prefer to date someone with the same skin color and racial background. And I don’t recollect a single mention by the panelists of issues affecting gays and lesbians. It’s inexplicable how the speakers—who were all white and straight—failed to widened their scope for a more inclusive discussion. 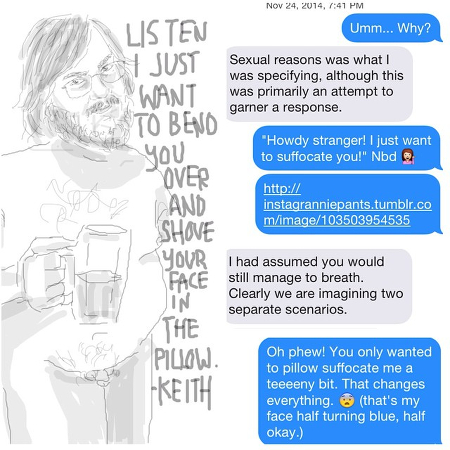 The panelists barely acknowledged accusations of emotional manipulation on social-media sites, which Facebook and OkCupid both faced earlier this year. And while the speakers discussed online communications between potential mates, they forgot to talk about the severe harassment of women by men—from sexually explicit written invitations to unwanted dick pics—which has become so widespread in the dating community that the aberrant behavior has become expected, in a way. Just ask the artist Anna Gensler, who draws caricatures of the men who contact her on Tinder with sexually explicit messages and publishes them, sometimes with collaged digital images but always showing the man with a hilariously small penis, on Tumblr and Instagram (as well as Granniepants.)

1 Tonight’s event was the third and final panel in the Art de Vivre: Talks series produced by the French Institute Alliance Française in conjunction with its gallery exhibition of fashion photographs by Jean-Daniel Lorieux, titled Seducing the Lens, and a film series.

2 Fisher is not only a research professor at the Center for Human Evolution Studies in Rutgers University’s Department of Anthropology, she is also chief scientific advisor for Chemistry.com, a division of Match.com, which colored her comments.

3 One trend Reis has noticed is that people prefer finding a good provider to finding love. The opposite was true during the 1970s and 1980s, he said, but because divorce is so prevalent, singles are suspicious of intense passion.