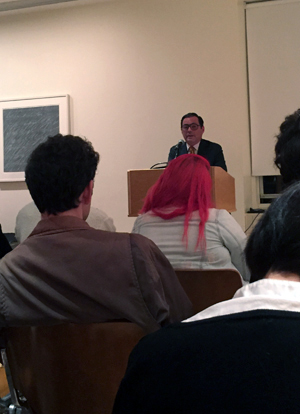 In academic art history, the single-author, single-subject monograph—an extended study on an individual artist, a group of artists, or a chronological or geographic range—is typically considered the pinnacle of scholarly achievement. A parallel to it in the hierarchy of subject matter in Western art would be history painting, a large work that addresses a biblical, historical, or mythological subject. To continue the analogy, a coauthored or edited book is comparable to a portrait, and an essay in a book is a genre scene. The article published in a peer-reviewed journal would be the landscape. The lowest form is the book review—the still life of academic writing.

“I’m a book reviewer,” said Eric Banks, director of the New York Institute of the Humanities at New York University since 2013, to about thirty attendees of a talk at the New School. No kidding—he has assessed hundreds of books on a wide range of subjects (art, literature, nonfiction) over the last twenty years for the New York Times Book Review, New York Review of Books, Chicago Tribune, Slate, Chronicle of Higher Education, and Financial Times, to name a few. Despite this hierarchy established in the opening, the book review and its parent form, the critical essay, allow for a high amount of creative liberty for its author, as demonstrated every week in “The Critics” section of the New Yorker. “Writing about books,” Banks said, is “a springboard to talk about so many other things in culture.”

The critical essay is the hardest thing to write, said Honor Moore, nonfiction coordinator of the Creative Writing Program at the New School, who introduced the speaker. Where do you begin? Who are you when you write one? How do you manage a voice that is neither an encyclopedia entry nor a bad sermon? All good questions. What seemed to concern Banks the most, when reviewing books, is to avoid writing that’s too “plotty.”

Banks admitted that he misunderstood the initial invitation to speak and became preoccupied with preparing a talk on the autodidact as critic, or on what it means to be self-taught in the internet age. Another possible topic could have contrasted the work of a critic with that of an academic scholar or a writer of personal interest. (Is that a semiprofessional blogger or a contributor to Amazon or Yelp?) He could have kicked around a “praise of digression” but instead read his work and talked about it—a strategy Moore had suggested. 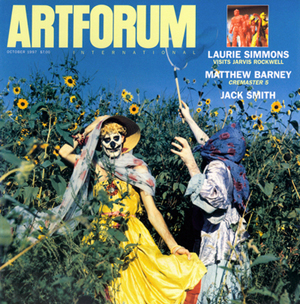 The cover of Artforum in October 1997

Before reading three of his own short critical essays from the past few years, Banks gave us a brief professional biography. In the mid-1990s, he found himself in a senior-editor seat at Artforum, his first real job out of graduate school. At the time, he said, voices in the magazine came from the belletristic tradition of poets and novelists, from people interested in film, photography, and fashion (“fashion was an extremely important thing around 1995”), and from art historians and graduate students. Art criticism is always tied to higher education, Banks remarked, but book reviewers for the types of publications in which he publishes (journalistic and cultural outlets covering literature and nonfiction) don’t interact with the academy. A good essay on art achieves good formal description, which Banks said comprises 90 percent of the text. “Students are really trained—and they’re trained very well by their professors—to be able to look at something and describe it. You can’t write a critical essay unless you really describe in form[al] terms, in descriptive terms, the object you’re writing about.”

I beg to differ. First, I would put that figure at no more than 50 percent, because subject matter, biography, history, and cultural context are crucial topics. And this rigorous training of graduate students? A few years ago, while editing the first sixty pages of a doctoral student’s dissertation, I was astonished by the inability of the author to describe works of art: her words hardly corresponded with the accompanying illustrations. Then again Banks, as an editor for Artforum and Bookforum—two of the top publications of criticism of any kind—probably saw only the best stuff from the brightest academics.

Twenty years ago, Banks observed, writers on art didn’t need to explain a lot in their criticism because their readership was small and dedicated. Now the art world has a wider audience that may not share the same knowledge base. When he took over the editorship of Bookforum from Andrew Hultkrans in 2003, and with the publication’s relaunch later that year, Banks said he wanted swagger from his writers.1 He led the bimonthly journal for five years before replacing Lawrence Weschler at the New York Institute of the Humanities.

The first text Banks that read tonight, “Pony Up,” came from the April/May 2012 issue of Bookforum. The piece grew, he disclosed, from evolved from avoiding a book review (Patricia Meyer Spacks’s On Rereading from 2011) to a musing on his longtime obsession, horse racing, and in particular, his collection of “ridiculous books” on the subject (from pulp novels to betting tips). Banks eventually shoehorned the book review into the piece, in the fourth of seven paragraphs, but the essay was truly his own thoughts—delightfully self-indulgent, if not somewhat neglectful of the author.

Banks said his stuff is good when it hits both high and low culture. He also identified the pitfalls of the middle-ranged piece, which plagues many writers of short-form criticism:

People have written a lot of short reviews, reviews in the fifteen-hundred-word range, which are just long enough to take you forever [to write], and to involve a lot of work and … thought about how to structure an essay, but just short enough that you really can’t get into great depth into the kinds of things you’d like to get into. It’s eye opening, because you frequently will go back and read something you’ve written and think, “I have no idea what I was trying to say with this sentence. I have no idea why I reviewed this book. I don’t even remember reviewing this book.”

Some reviewers, he said, don’t even remember reading the book.

Banks apologized in advance for the scatological passages from the Franz West catalogue essay he read, saying he is uncomfortable with colorful language.2 The piece was structured into three sections: Twinkies, roses, and sausages. Banks read from the sausages passage, telling us how the artist’s studio often ate at a Chinese restaurant nearby and sourced their own lentils to accompany the brown rice, and how West’s body was deteriorating because of illness, looking not unlike Ichabod Crane, bad teeth, still smoking cigarettes and marijuana. In West’s work on paper, “sausage equals dick equals turd equals sausage.” Banks described a handful of sculptures and drawings, how the artist’s work was autobiographical despite the collaborators in his studio, and how his audience-engaged pieces differ from that of Relational Aesthetics (they are private). 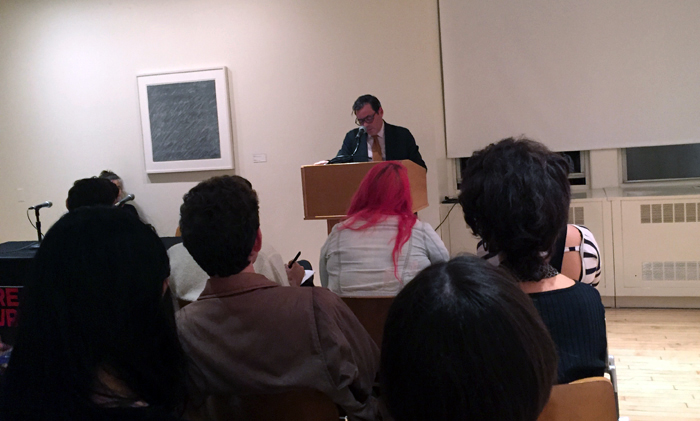 “Public Anomie,” his review of Michel Houellebecq’s novel Submission, recently translated from French to English, was freshly published by Bookforum. It was difficult to avoid thinking about the November terrorist attacks in Paris, Banks mentioned, which took place after he wrote the review. Banks remarked how both his essay and a New York Times review of Submission compared Houellebecq to Lars von Trier, which Banks thought was his observation was a special discovery. Sometimes things are in the air. The plague of modern life, Banks said, borrowing a term from Benedict Anderson, is short-lived communities we form. Those which surround books (and their reviews) still engender “magic conversation.”

Moore moderated the event’s Q&A, first addressing the solitude of book reviewing. Banks thinks about voice a lot, and he writes, rewrites, and rewrites. Moore concurred, “One has to keep rewriting to find out what you think.” Banks replied, “You’re always writing criticism in your head. You’re constantly taking notes in your head for essays that will never be written.” Yet “When you finally arrive at something, it’s almost like the smelling salts have been broken open, and you’re really alert to what you’re thinking about, reading about, what you’ve read [already].” Critical writing, he implied, sharpens your perception of the world. “There’s something about the critical essay, it makes you more attuned to … a lot of things. Somehow your senses are shot into another level of awareness. It’s the cocaine of writing, or something.” Yet he worries if a piece be embarrassing in a year—not unlike many people’s regret, the next day, about their behavior on the illegal stimulant.

Banks wished he was more daring in certain areas. Born and raised in Louisiana, he feels he needs a weird Southern high-brow persona yet cannot write a history of the South. Nor could he write a book on smoking cigarettes (he once was a smoker) and the invention of obscenity in the Middle Ages. The questions I didn’t ask were: Is it harder to write about art than about books? How important is the editor, and what is it like writing and publishing without one?

2 Rachel Harrison and Eric Banks, “Hostess with the Mostess,” in Darsie Alexander, ed., Franz West: To Build a House You Start with the Roof (Cambridge, MA: MIT Press, 2008).