A Better Everyday Life for the Many People 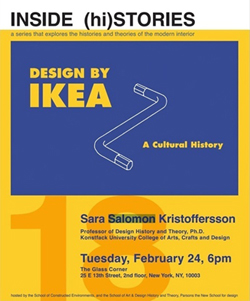 “IKEA is huge,” stated Sara Kristoffersson, professor of design history and theory at Konstfack in Stockholm, Sweden.1 Who could argue with her? Founded in 1943, the immensely popular seller of affordable furniture, utensils, and fabrics for the home has spread across the globe and brings in billions of dollars a year. A more intriguing proposition was this: “IKEA has made Swedishness a virtue in itself.” But scratch deep enough, Kristoffersson warned, and hierarchies begin to appear within a company that many people believe mitigates consumerism and capitalism with an egalitarian touch.

The slender, stylish Kristoffersson, dressed in the requisite black sweater, skirt, and tights of a European historian of modern design, her blonde hair pulled back into a ponytail, delivered an hour-long lecture derived from her 2014 book Design by IKEA: A Cultural History. Because IKEA’s brand is synonymous with its mother country, she argued, the company sells abstract notions of modernity, democracy, and social justice, which become problematic when looking closely at its history. According to Kristoffersson, promotional slogans such as “beauty in homes” and “design for everyone” are a “mass-produced version of Swedish design history.”

The story of IKEA’s ascent is well established. The name is an acronym consisting of the initials of the company’s founder, Ingvar Kamprad; the name of the farm on which he grew up, Elmtaryd; and the name of his hometown, Agunnaryd (in the southern region of Sweden called Småland). Born in 1926 to a family of German immigrants, Kamprad entered business at an early age—he was five—by selling matches. As he grew older he offered fountain pens, Christmas cards, and garden seeds, among other merchandise, in his town and eventually via post. Entering the furniture business, Kamprad developed a mail-order catalogue before opening his first showroom in the small and relatively remote town of Älmhult. People traveled there, saw the products, and ordered what they liked; the manufacturer then shipped the goods directly to them, using a flat pack of unassembled parts to minimize costs. 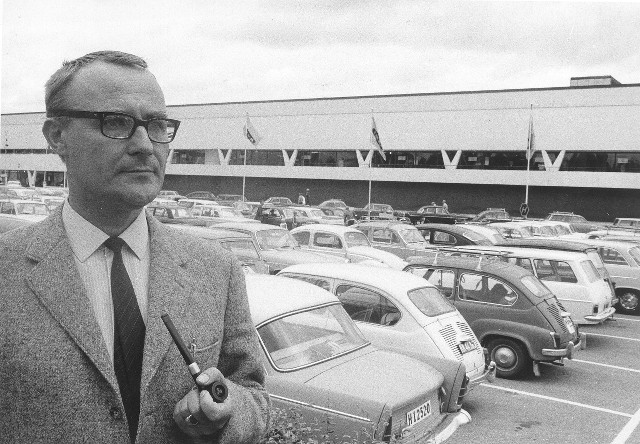 Operating on the family farm in its early years, IKEA grew tremendously after World War II, becoming known for offering good design at low prices. According to an authorized history of the company by the journalist Bertil Torekull, the Swedish economy grew nearly 4 percent a year, on average, between 1950 and the early 1970s.2 Swedish social democracy also thrived during this time, and the postwar housing boom catapulted IKEA to the upper echelon of the furniture industry, though not without resistance from the national trade associations, which forbid manufacturers from selling materials to Kamprad, and in spite of his absence from industry trade shows, from which he was banned. For many years capitalist competition went toe-to-toe with the planned economy—though Kamprad did order materials from factories in communist Poland.

In 1973 IKEA opened its first store outside Sweden, in the Swiss town of Spreitenbach, near Zürich. In order to give his company a profile during the European expansion, Kristoffersson said, Kamprad borrowed from the Swedish cultural image bank, using moose and Vikings to strengthen his brand. By the 1980s the national markers disappeared, she told us, which marked a shift from a representational to conceptual association to Sweden. Even though IKEA changed its logotype color from red to the blaring yellow and blue of the Swedish flag, Kristoffersson has detected subtle national visual markers in the company’s visual culture. The arrangement of a dining room in one advertising photograph, for instance, recalls the work of the nineteenth- and twentieth-century painter Carl Larsson. I imagine most people without knowledge of Swedish modern art wouldn’t catch the reference. 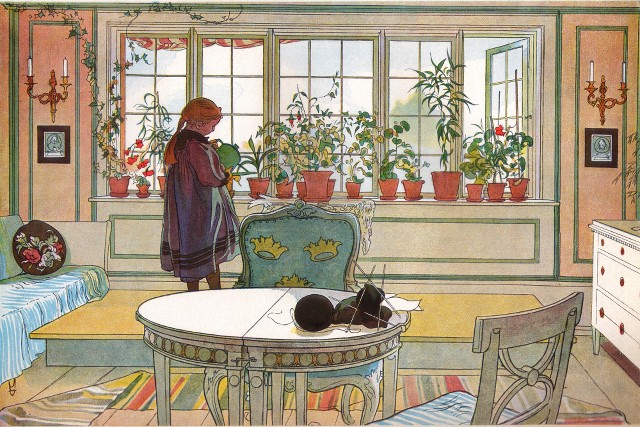 Another key decision linking IKEA to its home country, Kristoffersson revealed, was keeping the indigenous names for its products. The Hästveda armchair—named for a small town in southern Sweden—is sold under that title from the United States to Saudi Arabia. Similarly, the scholar continued, IKEA has claimed the traditional food it sells in its restaurant and on its shelves—meatballs with white sauce, mashed potatoes, and lingonberries—as its own. IKEA often sells the romantic idea of nature, Kristoffersson pointed out, with advertising images of beautiful landscapes with red houses. The company has even poked fun at its domestic consumers, acknowledging the stereotype that people from Småland are frugal, “famous for working hard and living on slender means,” Kristoffersson said. IKEA’s promotional strategies have also played on a notion embodied in a hard-to-translate Swedish word, lagom, which means “just enough” and generally emphasizes moderation and equality.

Kamprad has made a fortune based on the meaning of this concept and on the belief that his management style is not learned but rather just who he is. He favors jeans and sweaters to suits, which give him a folksy, friendly, down-to-earth vibe, and he avoids luxury hotels and flies coach—though he can easily afford both. While Kamprad drove a Porsche as a successful young man, he now gets around in a trusty late-model Volvo. In 1976 he wrote a manifesto, The Testament of a Furniture Dealer, that embodies his business philosophy, explicating nine core ideas for IKEA workers such as “Reaching good results with small means,” “Simplicity is a virtue,” and “Profit gives us resources.” Kristoffersson compared the Testament’s language to religious or political speech. Yes, and I can imagine a union leader, avant-garde artist, or motivational speaker also writing these same words. In keeping with his folksy style, Kristoffersson said, Kamprad kept the awkward Swenglish phrase “the many people” to demonstrate how IKEA is unconcerned with appearing too tight or polished in the formal business world.

Kristoffersson compared IKEA’s story to that of Apple, whose two founders, Steve Jobs and Steve Wozniak, building an empire out of a garage in California. But IKEA’s narrative positions itself as driven not solely by financial interests but also with a higher purpose, an ideal to fulfill. (IKEA developed its chronicle, Kristoffersson pointed out, before the idea of making a story became a marketing strategy.) Yet the falsification isn’t important, she said. IKEA has successfully risen about mere consumerism, and any bad press—regarding a perceived association with social democracy, embarrassing personal scandals, and questionable business and environmental practices—has failed to negatively impact the company in the long run. 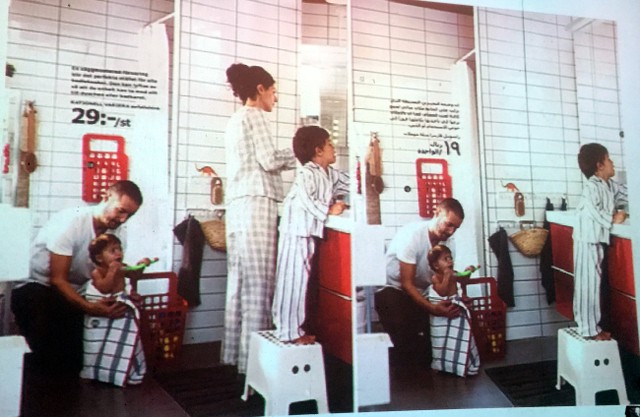 So is IKEA beyond critique? Hardly, but Kristoffersson’s list of criticisms against the company felt weak. In politically conservative circles in the United States and Great Britain, she said, IKEA was attacked for its perceived alliance with the nanny state, with a dystopian welfare system in which individuality is relinquished. As evidence, she offered the Swedish financial crisis of 1992, which she claimed eroded the country’s famously cushy lifestyle. IKEA also has a reputation for being a chameleon, Kristoffersson said, using the cultural and political climate to sell products: a 2009 advertising campaign, for instance, exploited the Barack Obama moment with the slogan “Change begins at home.” And in the Middle East, IKEA altered a photograph from its catalogue, digitally removing a woman from a bathroom scene that also showed a man and two children. IKEA’s most damning moment came in 1994, when a journalist uncovered evidence that Kamprad, as a teenager in the 1940s, was affiliated with fascist groups and openly admired the pro-Nazi intellectual Per Engdahl.3 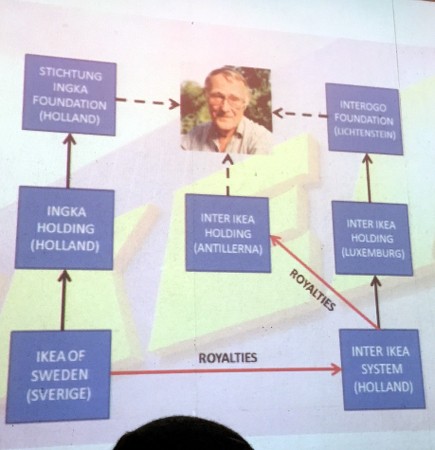 Comprising two foundations based in the Netherlands and commercial divisions in Denmark, Belgium, and Luxembourg (among other countries), the privately owned IKEA possesses an “extremely complex business structure,” Kristoffersson said, which was designed to avoid taxes. A chapter in Torekull’s book explains this intricate arrangement of power, money, and control, but the structure is nearly impenetrable to those unfamiliar with international trade (like me). Yet, she argued, we don’t view IKEA as a shrewd, parsimonious multinational whose main purpose is to maximize profits—though few would deny this status. I was reminded of people’s surprise when they discover that the cofounder and co–chief executive officer of Whole Foods, John Mackey, is an audacious libertarian capitalist. (He also helped to establish a movement called Conscious Capitalism and, with Raj Sisodia, authored the book Conscious Capitalism: Liberating the Heroic Spirit of Business (2013).

So, whether to shop at IKEA or Whole Foods or wherever, or to buy Apple products, is entirely up to the consumer. This is not to diminish the crucial role played by government regulators, nongovernmental organizations, and consumer advocates around the world. We need them to serve as watchdogs, keeping corporations like IKEA from unscrupulous labor-related activities. And multinational corporations have slowly improved their business ethics. In The Testament of a Furniture Dealer, Kamprad emphasized IKEA’s adherence to Möbelfakta standards. Apple has been responsive, perhaps grudgingly so, to improving labor rights and workplace safety for employees of the Taiwanese electronics manufacturer Foxconn.

Kristoffersson noted a few of IKEA’s positive environmental decisions over the last twenty years, such as minimizing fiberboard products and pushing LED light bulbs.4 IKEA is one of the largest foundations in the world, she said, so a certain percentage of its profits go to good causes—as they should. Yet with low prices that stimulate consumption, yielding throwaway products, Kristoffersson asked rhetorically, “Isn’t it more ecologically friendly to not buy at all?” An audience member agreed, pointing out the low- to no-resale value of IKEA products. For me, the disposable nature of the company’s goods is highly overrated. Looking around my apartment, I see IKEA shelves, cookware, curtains, and more—some bought nearly fifteen years ago—that function well and don’t need replacing. 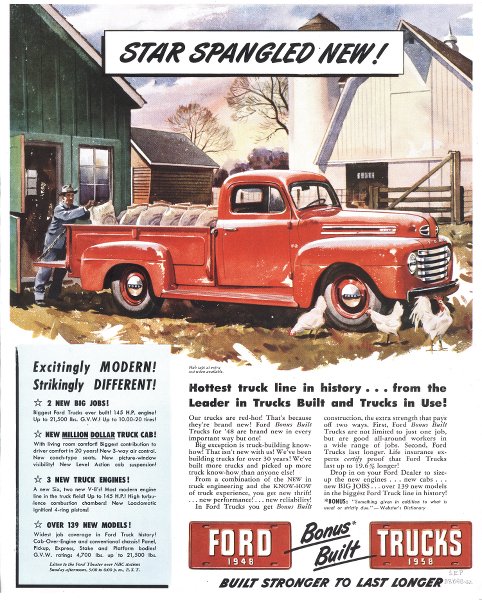 A 1948 advertisement for Ford trucks

“IKEA hardly needs Sweden,” Kristoffersson said as she began concluding her talk. “IKEA hardly needs the image of Sweden and Sweden’s welfare state. It is largely outdated and challenged.” That may be true, but how does her scholarly subject compare to other brands that are inextricably tied to their native origins? Ford trucks, Budweiser beer, Coca-Cola drinks, and McDonalds hamburgers are all products with strong American identities that don’t reflect the diversity of national demographics—we’re not a nation of cowboys, just like Sweden isn’t crawling with blond-haired, blue-eyed babies. Kristoffersson said that Swedish knowledge of American life comes from popular culture, such as the television show House of Cards, but reminded us that such images reflect real standards in society and affect our conception of the world.

While Kristoffersson’s parallels between brand (IKEA) and country (Sweden) were insightful, and the historical background of the company was interesting, the stakes of the subject of her talk felt low. IKEA appears to be a sensible (but far from perfect) multinational corporation with some degree of social and environmental responsibility that matches its aesthetic ideals and its benevolent reputation. While the firm’s finance and governance structure is far from transparent, IKEA largely delivers on its promise “to create a better everyday life for the many people,” to quote Kamprad’s Testament. Criticisms of the ubiquity of bland knockoff modern design notwithstanding, the biggest issue for your average consumer is having too much IKEA product in your home. After all, you don’t want to live in a showroom.

1 Konstfack is also known as the University College of Arts, Crafts, and Design.

3 Both Kristoffersson and Torekill cover this episode in their books.

4 For more official information, see IKEA’s annual sustainability reports from 2009 to 2012 and the publication The IKEA Way on Purchasing Products, Materials, and Services.