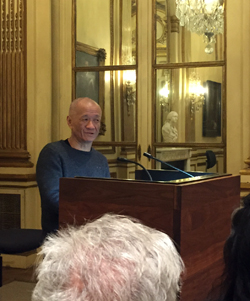 Tehching Hsieh created among the most radical, strenuous, and bizarre bodies of work in all of art history. Only prisoners with life sentences or captured soldiers could ever relate to the parameters Hsieh set for himself for his five One Year Performances, which he described in chronological order during his lecture at the Institute of Fine Arts. Prisoners of crime or war rarely elect to put themselves in a position that isolated themselves, mentally and physically, for long periods of time.

Speaking broken English in a thick Asian accent, Hsieh told his life story as an artist. Born and raised in Taiwan, he “jumped ship” in Philadelphia on July 13, 1974, while serving with the Taiwanese Merchant Marine (and after his compulsory three-year military service). Hsieh headed for New York, where he lived for fourteen years as an illegal immigrant as he tried to establish himself in the downtown art scene. In fact, he even made an artwork resembling a US Immigration Service “wanted poster” four years after surreptitiously slipping into the country. 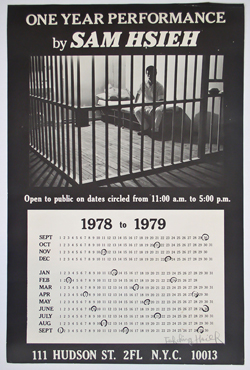 For his first One Year Performance (1978–79), also known as Cage Piece, Hsieh (using the first name Sam) built a mock jail cell, about one hundred square feet, in his TriBeCa loft, where he lived without speaking, reading, writing, listening to the radio, or watching television for an entire year.1 After reading the brief explanation of the piece from the digital image of a typewritten manuscript projected onscreen, Hsieh explained how he rationalized his cramped quarters: “Space—I try to create bigger…. I try to make so this corner become my home. Opposite corner become outside. So every day I can go out, take a walk, and come home.” He held visiting hours, but not many people came to visit this human zoo. For his exhibition at the Museum of Modern Art in 2009, he reconstructed the cell, which was displayed with documentation of the project.2

Presenting his career chronologically, Hsieh described the second One Year Performance (1980–81), also known as Time Clock Piece, in which the artist set a goal to punch a time clock on the hour, every hour, for 365 consecutive days. Hsieh screened a video of the film he made at the time—a six-and-a-half-minute succession of single 16mm film frames taken every time he punched the clock. As the hours and days progressed, the hair on Hsieh’s shaved head grew out, and he looked considerably tired toward the end. What struck me the most was how Hsieh just stood there, in the silent room at the institute, with an expressionless look on his face, blinking occasionally as he watched the rapidly changing stills of himself from thirty-five years ago.

Tehching Hsieh watches himself on film (photograph by Christopher Howard)

For his third One Year Performance (1981–82), Hsieh—now using his real first name, Tehching—spent the entire year without entering an indoor space. Almost. The New York City police detained him briefly, and a video clip of Outdoor Piece that Hsieh showed included footage from the day when cops dragged him into the station house after a vagrancy arrest. Again, Hsieh’s face was expressionless as he watched his younger self, screaming hysterically.

The fourth One Year Performance (1983–84) was subtitled Art/Life or Rope Piece. For the project, Hsieh tied himself to a fellow performance artist, Linda Montano, with an eight-foot-long rope. “She like to do meditation, but I don’t quite … feeling,” he joked as he showed a photograph—one of several hundred taken during the span of the performance—of a grumpy-looking next to an absorbed Montano. While Hsieh didn’t hold a job for his first three pieces, he did construction work during the fourth to make a little money, and he traveled with Montano to Philadelphia, where she taught. Many of their conversations were audiotaped, Hsieh said, flashing an image of ordinary cassettes sealed in plastic cases—intended never to be heard. Like the previous pieces, the artist never described what it was like in the midst of the performance, providing us only with basic facts—and limited ones at that. What was, for example, the significance of the start and end date of July 4? 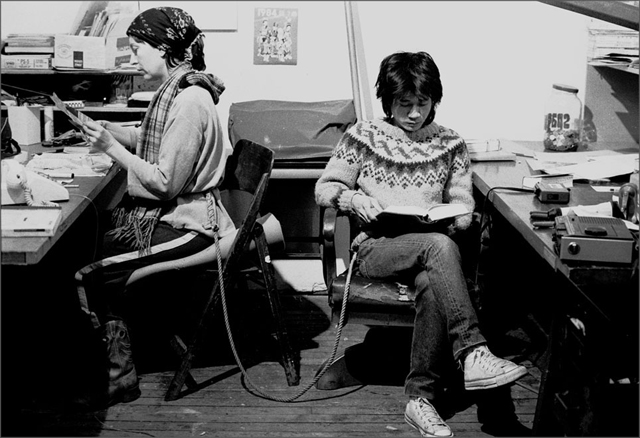 The fifth One Year Performance (1985–86), in which Hsieh did not see, talk, or read about art, but “just go in life,” preceded the sixth, called Thirteen Year Plan or Earth, which lasted from his thirty-sixth to his forty-ninth birthday. From December 31, 1986 to December 31, 1999, Hsieh stated that he would make art but not show it. He tried to “disappear” in Alaska but only made it as far as Seattle, working the same kind of jobs he did in New York when fresh off the boat. (He also sold his early paintings for $500,000 and bought a building in Williamsburg, Brooklyn, that housed a residency program for artists.) A poster for each project is the only documentation we have of how Hsieh spent his time. Onscreen he showed digital renditions of his desired retrospective, a timeline of his work in eighteen equally size rooms, one for each year of his performances. In his proposed exhibition, visitors would walk through and become aware their own personal time, thinking about their own life experiences.

During the audience Q&A, an audience member asked Hsieh which performance had the strongest impact for him? Hsieh skirted the question, explicating further his concept of separating “art time” and “life time,” the latter of which happens between performances, and of thinking about present time. “I don’t want people to see my work as document,” he said, considering the documentation as the proverbial tip of an iceberg.

One audience member quizzed the artist about his reconstruction of Cage Piece at MoMA—some folks get really hung up on originals and re-creations—but what is more interesting to me is if that performance can be restaged under the same conditions. Ten years ago Marina Abramović covered five classic works of 1960s and 1970s performance art—by Vito Acconci, Chris Burden, VALIE EXPORT, Joseph Beuys, and Bruce Nauman—in Seven Easy Pieces (2005), which took place at the Solomon R. Guggenheim Museum during the first iteration of Performa, the New York–based biennial of performance art. Can you imagine her or anyone else punching a time clock every hour for a year or staying outdoors for 365 days? Even if someone were crazy enough to redo Cage Piece, that person’s experience would be completely different that Hsieh’s.

A thoughtful attendee asked Hsieh how he first conceived time as his medium, so Hsieh started from the beginning. Reminiscing about his early days in Taiwan, “I’m very good for abstract painting,” he laughed, “express my emotion.” After college friends who had traveled to the West described Conceptual art to him, he experimented on his own, including a jump from a second-floor window (a la Yves Klein) and exposing one hundred newspapers that were laid on the ground with paint. In New York Hsieh worked as a dishwasher from 1974 to 1978, an experience he considered a “four year wasting time experience,” during which he thought about life. “I don’t go looking for it,” he explained his realization. “I already in the situation. I just repeat wasting time one more year. I will catch it. I just create a form. I did it in a cage.” Hsieh deems himself to be best at wasting time, a time of freedom during which “freethinking” can happen. “Life is difficult, but you’re still freethinking.”

Hsieh avoided confirming the audience’s interpretations of his work: fear and bureaucracy as form, the legal medium, and so on. Instead, he responded, “I’m more like caveman.” Hsieh’s work may concern Zen Buddhism, the penal system, and political asylum, and the artist is content to let others elucidate its meaning. Critics and historians have done a good job. Colby Chamberlain recently wrote: “By pledging to imprison himself in his studio, or to punch a time-clock at hourly intervals, or to stay outdoors, Hsieh imposed on his own body strictures that reverberated with wider regimes of control: incarceration, labor, homelessness (and, perhaps, in the case of his collaboration with Linda Montano, marriage).”3 And six years ago, Roberta Smith assessed Hsieh’s succession of performances: “For ‘Cage Piece’ Mr. Hsieh deprived himself of nearly all contact with the world. In the next four pieces he eliminated, in succession, concentration, shelter, privacy and finally art itself. In each case he altered the nature of time radically for himself and, retrospectively, us.”4 She is right—he made this work, putting himself through these strenuous activities, so we don’t have to. And neither does he: Hsieh more or less retired from making art on January 1, 2000, after concluding the Thirteen Year Plan.

1 Hsieh does not consider the scratch marks on the wall for each passing day to be writing.