A Crisis of Critique 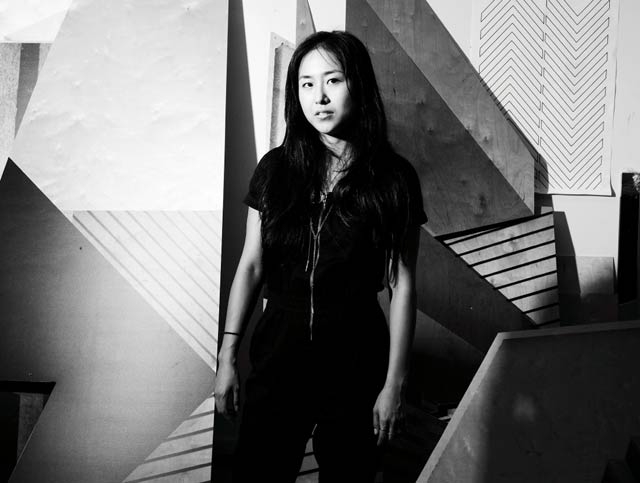 Lately I’ve thought about the difference between a work of art that is about a particular subject and one that is a critique of that same subject. Many in the art world operate with the mindset that an artwork dealing with a political, social, or economic issue actually critiques that issue, usually from a leftist perspective, but rarely does the work transcend factual commentary that states “there’s this thing going on in the world that you should know about” or “my work is about this thing going on in the world.” A critique is an investigation into a subject with the goal of picking it apart and figuring out just what the heck it is. Unless an artwork or project serves as a visual form of investigative journalism—knocking on doors, asking tough questions, checking and rechecking facts and figures—then it’s largely symbolic and not much different from consciousness-raising, which isn’t a bad thing but shouldn’t be conflated with something larger and more significant.

Josephine Meckseper’s displays, for instance, are tasteful arrangements of consumer products that are absurdly impotent protests of neoliberalism. Better examples of critique are Hans Haacke’s challenge to New York slumlords in Shapolsky et al. Manhattan Real Estate Holdings, a Real-Time Social System, as of May 1, 1971 (1971) and Trevor Paglen’s photographs of top-secret sites of extraordinary rendition from ten years ago. The opposite of critique is not complicity—there’s a broad range of approaches that won’t ensnare an artist into expressing unpopular views. What makes a critical practice so important for artists whose work often fails to provoke? 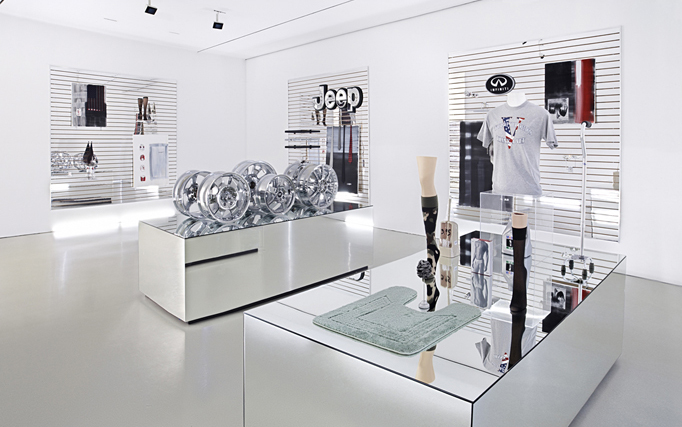 While I don’t recall Mika Tajima specifically referring to her work as a critique during her artist’s lecture at Parsons the New School for Design, others have noted the approach. The critic Lara Wisniewsk wrote this in her Frieze review of Tajima’s exhibition The Architect’s Garden (2011) for the Visual Arts Center at the University of Texas at Austin:

Getting to the bottom of Tajima’s constellation of influences—which includes office design, abstraction, public institutions and leisure spaces—it becomes clear that she operates like a flâneur. Small explosions of joy punctuated the show—indeed, clearly in love with the visual beauty of geometric design, it was initially difficult to recognize the targets of her critique [italics mine].

Wisniewsk recognizes the allure of Tajima’s super clean, tight aesthetic and goes on to describe how the artist engaged Richard Linklater’s classic film Slacker (1991) as well as the designer Herman Miller’s Action Office Series—better known as the cubicle—that, in the 1960s, sought to humanize white-collar office labor but may have done the opposite. Tajima certainly incorporates play and motion into her projects, recovering Miller’s original intention for the organized, efficient workspace: to liberate the employee. The Austin exhibition also nicely addressed notion of working and not working, an idea worth discussing considering how traditional distinctions between labor and leisure have increasingly eroded. Some contemporary offices now accommodate Ping-Pong tables and beanbag chairs, and many employees can’t help but to check their work email before going to bed every night. One could even argue that the art world has exemplified this blurring of personal and professional life for decades. But does Tajima (and many other artists) actually critique anything? I’m not sure. 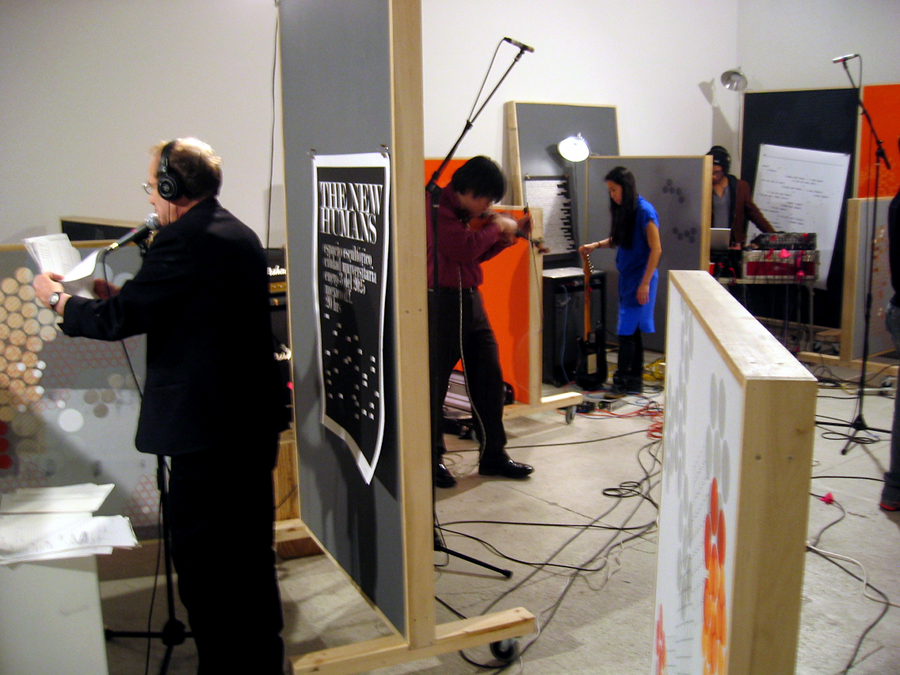 Tajima talked for an hour at Parsons about the trajectory of her career since the mid-2000s. A primary concern for her is how the body is shaped by the built environment. I liked how she presented the idea in the passive tense, so that architecture and urbanism force themselves onto the helpless figure. Tajima is also interested in Miller’s office furniture and in high-end design more generally. In sum, her artistic practice is about negotiations of space, the body formed by architecture, corporate environments, and a modular way of life, but it does little to differentiate between good and bad conformity and between situations in which mass production and interchangeable parts can be beneficial or malicious. 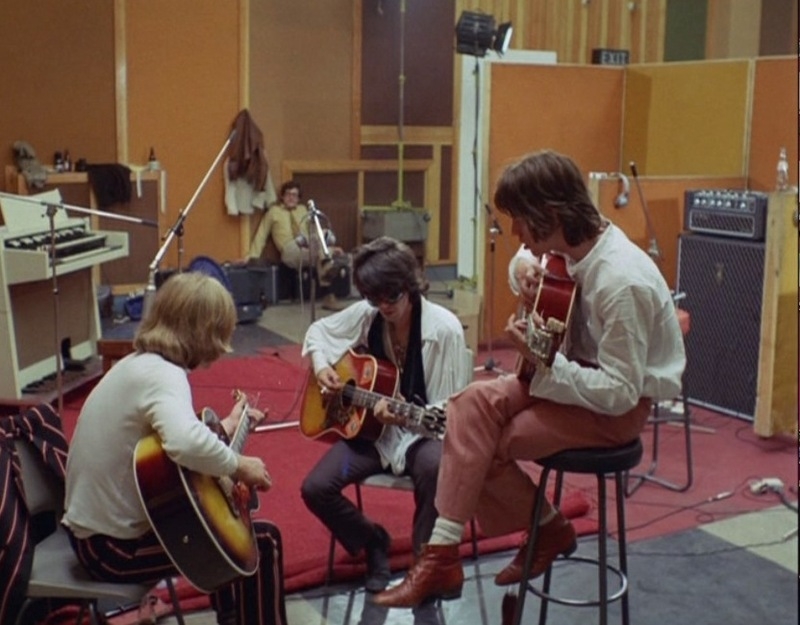 Another key influence for Tajima is painting, and she’s really into Jean-Luc Godard’s 1968 film One Plus One, which directly inspired her first solo show, Dissociate, at Elizabeth Dee Gallery in New York in 2007, which had sixteen movable panels that resembled cubicle pushpin boards or acoustic bouncers, such as those seen in the studio in which the French director filmed the Rolling Stones arranging their song “Sympathy for the Devil.” On these panels Tajima hung posters of her band New Humans (a collaboration with Howie Chen and others) that she commissioned from an artist friend. For Tajima the studio is not just a site for solitary activity, so she turned the gallery into a production and performance space and a recording studio. For the audience at Parsons Tajima played a short video clip from when New Humans, which can involve six or more people making “layered obstructive harmonious” noise music, took over the gallery. The artist and architect Vito Acconci read poetry into a microphone, Tajima manipulated a guitar and amplifier, and C. Spencer Yeh played a violin. 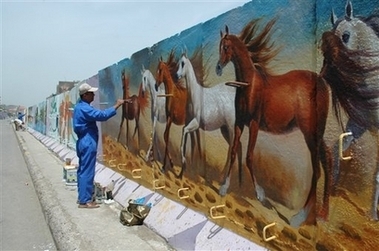 An artist painting a blast wall in Iraq

Tajima then presented her work from a 2008 exhibition at the Kitchen in New York, where the artist combined her previous interests with political subject matter, displaying movable panels on which hung “Xeroxed images of an artist painting landscapes on the Iraq wall, Tajima’s own extrapolations on Action Office designs, gigantic mirrors, comically poetic press releases filled with the Utopian dreams that inspired Action Office, and promo posters from the Mick Jagger cult film Performance.”1 During the 2007 troop surge in Baghdad, the provisional Iraqi government (perhaps with help from the United States military) hired painters to cover blast walls with colorful murals, masking their status as blockades and shock absorbers and attempting to beautify dangerous areas. Tajima said she had a concurrent show at COMA in Berlin. That city has a thing for walls, too. 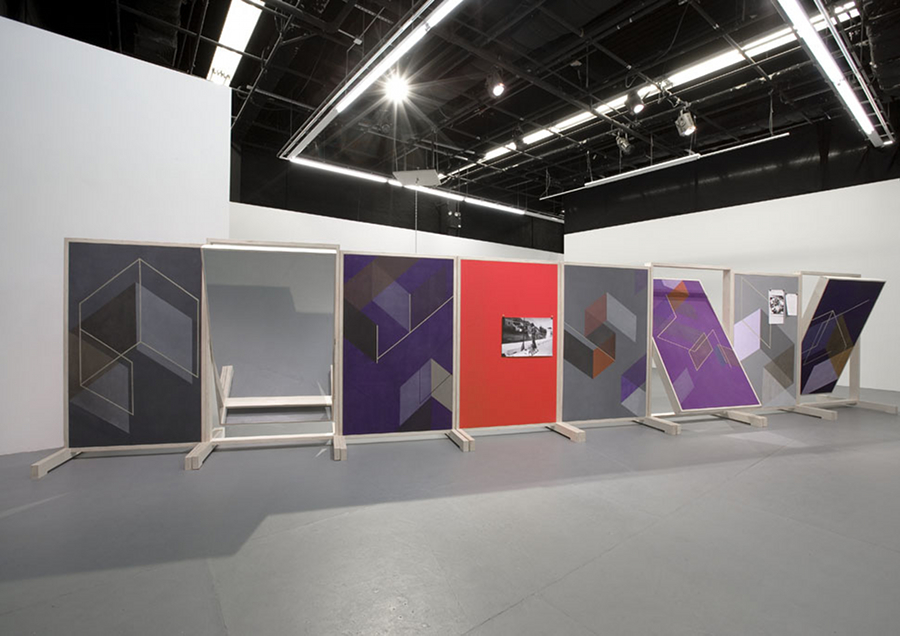 Like many artists, Tajima had been on a production treadmill, producing an excess of work, when Great Recession hit in 2008. Budgets dried up, work was returned to her studio, and material that once was art turned back into stuff. Was it time for her to purge after the binge? Not quite. In March 2009 her dealer, Elizabeth Dee, leased the shuttered Dia:Chelsea building in New York for one year for a project called X Initiative. Tajima arranged her surplus artworks into The Extras, which she called a “prop house” or a “film set waiting for a production.” “Extras are nonprincipal actors,” she explained. The installation traveled from Manhattan across the East River to SculptureCenter in Long Island City, and then to Paris and Sweden. Tajima called these exhibitions “outsourced storage.” 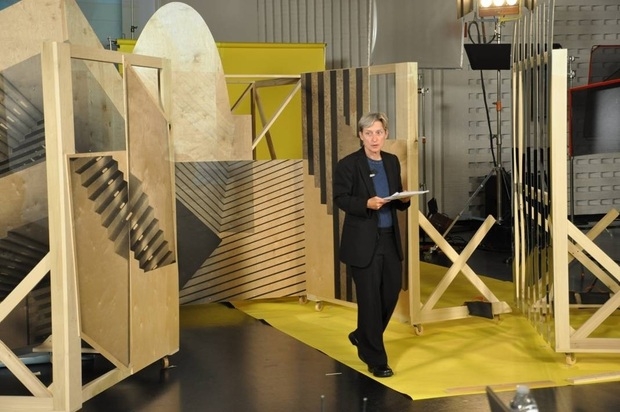 Judith Butler in Mika Tajima and Charles Atlas’s New Humans: Today Is Not a Dress Rehearsal (2009) at the San Francisco Museum of Modern Art

For a commission from the San Francisco Museum of Modern Art, Tajima constructed another film set, this time in collaboration with the artist and performer Charles Atlas, called New Humans: Today Is Not a Dress Rehearsal. The theorist, scholar, and feminist Judith Butler was the star of Dress Rehearsal, giving four lectures on topics such as love and doubt. Butler had to give up the ego of the lecture, Tajima said, so that her words became ambient sound. Everything was recorded when the space was open (for three days in May 2009), and Atlas would manipulate the video feed in real time, which was being screened in a nearby auditorium. They later edited down the footage and included outtakes and between-takes in their final versions to achieve a nonnarrative structure.

The South London Gallery in England invited Tajima to produce a work in April 2011, so again she collaborated with Atlas and New Humans for The Pedestrians, a piece about the politics of walking: as transport, protest, and trespass through activities such as military marches, cruising, sports, and parades and involving cheerleaders, choreography, and two academics in a lecture battle. 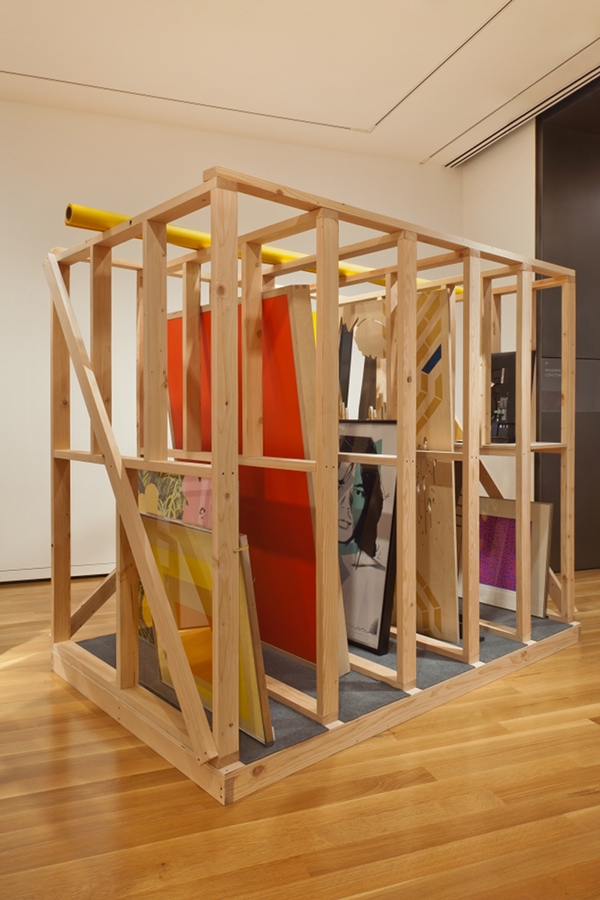 After that, the Seattle Art Museum commissioned a project, so Tajima reprised The Extras using pieces from the institution’s collection related to her own interests, such as a portrait of Mick Jagger by Andy Warhol and a colored square from Joseph Albers; it was on view from July 2011 to June 2012. At the time the museum had been suffering from millions of dollars of lost rent revenue due to the 2009 collapse of Washington Mutual, which had leased multiple floors in a tower adjacent to the galleries for the bank’s headquarters. During the project, called After the Martini Shot, Tajima worked with the designer Mary Ping (as well as with a photographer, hair stylist, makeup artist, and production assistants) to make clothing from museum marketing posters, which related, Tajima said, to the notion of the artist as brand. With this iteration of The Extras, the artist expanded her focus on storage to include the politics of deaccessioning, localized to Seattle but relevant to art and educational institutions nationwide who began to view priceless art collections as highly valuable liquid assets. She said the misuse of objects interests her; it seems museums continue to have similar but unscrupulous thoughts. The work edges toward critique here, but reminding viewers that museums only show a fraction of their collection at any given time is trite without articulating innovative solutions, such as the Vogel 50 x 50 program that distributes fifty works of art from the National Gallery of Art to every state in the union.

An endpoint, or change, for Tajima came during her final exhibition at Elizabeth Dee Gallery in 2011, for which she had acquired actual Herman Miller cubicle panels from a New Jersey office that was liquidating old furniture. She reconfigured the panels into floor sculptures; on the walls she hung objects that she called paintings, made of clear thermoformed Plexiglas shells whose color was sprayed from the back, as “tiles” for mixing and matching. The transparency of a plastic painting “exposes its own not-there-ness,” Tajima argued. Each painting has a geographic title, indicating how capital flows fluidly. Her dealer had difficulty selling the tiles because collectors felt the plastic material was too cheap. I would argue the concept—and the critique, if one is present—is equally as thin, but these decorative works are nice to look at. Which makes sense since the installation, called Furniture Art, was inspired by the modernist composer Erik Satie’s term musique d’ameublement, coined in 1917 to describe live musicians playing background music. 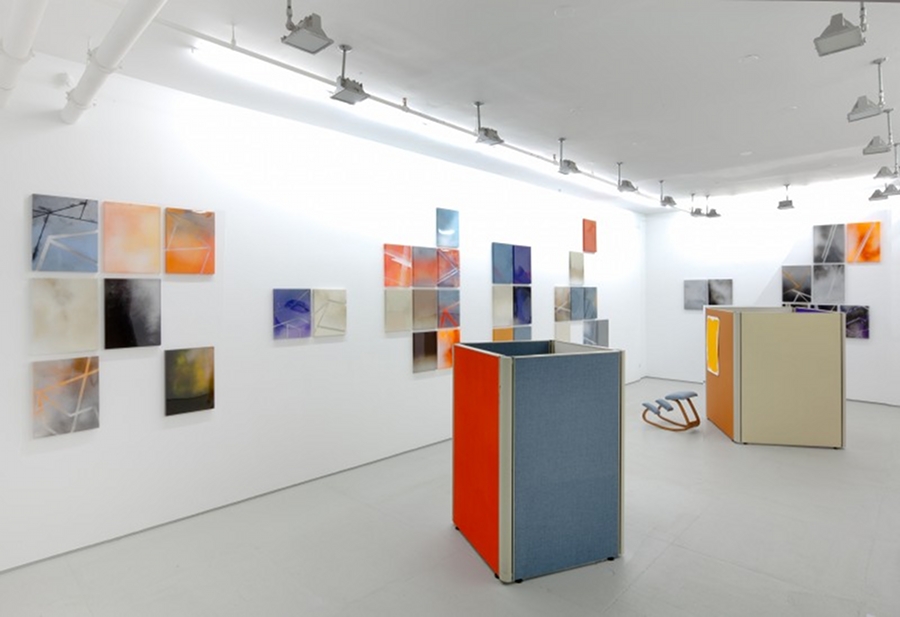 Tajima described a few more recent projects for the Parsons audience. An Aspen Art Museum commission allowed her to paint abstracted images on the sides of a semi-truck’s cargo trailer, the letters spelling out the word pineapple with pyramids and rectangles. I couldn’t tell if she was being ironic when she expressed amazement that a person can “get juicy pineapple in a snowy mountaintop.” At the Fabric Museum and Workshop in Philadelphia, where she was a resident artist, Tajima recorded the sounds of mechanical looms, digitized the audio, and output the imagery as woven pieces. The machine was thus “writing its own death,” she claimed, which toes the line with an art-theory obsession with obsolete technologies that denies the rapid rise of handcrafted and artisanal production over the past several years. Tajima executed a similar work using the sounds of a server farm and made new versions of Furniture Art and The Extras at the Mori Art Museum in Tokyo. True to form, her art practice has now become just as modular as the older forms she addresses and emulates.