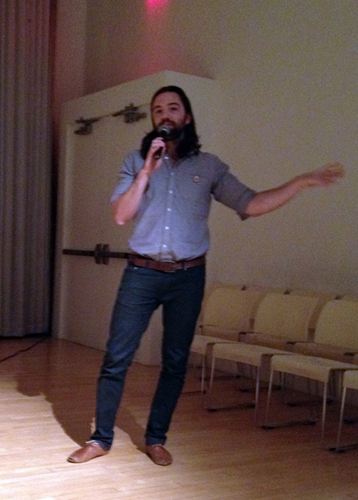 “In fifty to one hundred years,” Brian Droitcour said during his lecture on “Vernacular Criticism” at the New Museum of Contemporary Art, “the exhibition review might become a sonnet.”1 The arts of literature and theater were certainly on his mind, as he began his talk by reciting two of his cheeky Yelp reviews on venerated New York art institutions—the Frick Collection and the Solomon R. Guggenheim Museum—from memory for a full auditorium.

Regarding the former: “This museum is sooo random! I was there today and I heard a docent telling her tour group that ‘there was no acquisitions policy written down’ until 1951 and I was like, no shit lady. The Fricks were just buying whatever struck their fancy and now New York has this weird museum celebrating them and their whims.” And the latter: “The Guggenheim is the best museum in New York to go to on a date. If you go to the Met then your date will want to look at the Egyptian galleries whereas you want to look at Dutch painting, or whatever, and eventually you’ll reach a compromise that you both secretly resent…. The Guggenheim is good for a date because it doesn’t give you a choice. There’s nowhere to go but up the ramp.” It’s funny, as the saying goes, because it’s true.

A writer on art and culture for various publications and a doctoral student in comparative literature at New York University, Droitcour began contributing museum and gallery reviews to Yelp in early 2012. (He also started evaluating books on Amazon.) As a result, and among other accomplishments, he has cleverly discredited the three primary complaints that art critics have grumbled about for several decades, namely: “No one reads us,” “We have no power,” and “We don’t make any money.”2 For his generosity to the company, Yelp has bestowed Elite Squad status upon Droitcour.

This afternoon’s wide-ranging talk touched on numerous topics, including the formation of museums. In the Renaissance, Droitcour said, a museum was defined both as a room with all kinds of stuff in it and as a book containing a list of items in those rooms. He also described how early modern museums adopted a linear, progressive version of history popularized by Georg Wilhelm Friedrich Hegel as its default for presenting achievements in art, passing over Friedrich Wilhelm Joseph Schelling’s notion of the rotunda, in which a centralized subject can view all sides from a single position without considering overly structured narratives.

Droitcour also summarized findings in Helen Rees Leahy’s book Museum Bodies (2012), which analyzes the behavior of nineteenth-century gallery goers. I wonder if anyone has researched twenty-first-century museum behavior, explaining why people always crowd by the door of video installations, blocking others from entering and leaving, or why latecomers to a talk always stand in an auditorium’s aisles instead of making their way toward empty seats, because doing so might involve crossing the front of the room and interrupting the event—much to a speaker’s horror and the audience’s embarrassment. Droitcour kindly gave those folks standing in the aisle of the New Museum Theater permission to sit down, joking that “I don’t want to torture your museum bodies.” 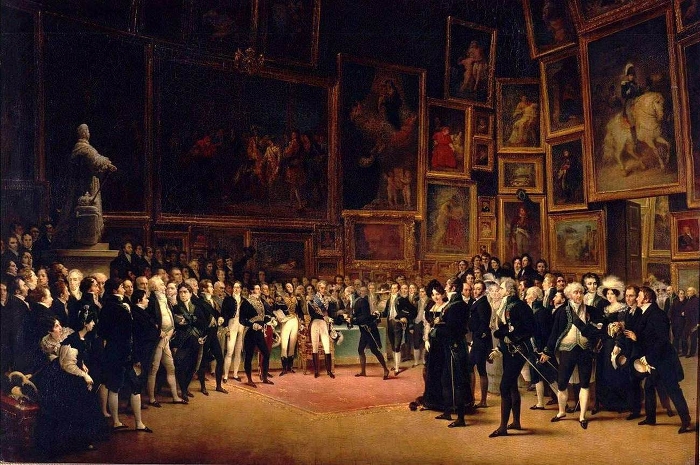 François-Joseph Heim, Charles X Distributing Awards to Artists Exhibiting at the Salon of 1824 at the Louvre, 1827, oil on canvas, 68⅛ x 100¾ in. (artwork in the public domain)

Droitcour positioned the Enlightenment author and philosopher Denis Diderot (1713–1784) as the father of vernacular criticism, the term given to the type of unprofessional writing found on platforms such as Yelp. For twenty years Diderot described his experiences at the Paris Salons—the art fairs of the eighteenth and nineteenth centuries that showcased the best in contemporary art before the aristocracy snatched it up—in an intelligible voice. With chatty and conversational “writing that echoed the voices of the people there,” Droitcour told us, Diderot promoted the value of engaging in public discourse while upholding aesthetic or critical standards, something that Jürgen Habermas theorized in his landmark book The Structural Transformation of the Public Sphere (1962, translated into English in 1989).

Having lived several years in Russia, Droitcour brought up relevant examples of vernacular participation in the arts from the Soviet era. For instance, Furnace was a culture journal that predated the revolution, “so Lenin hated them,” Droitcour added. He then discussed a few examples from Lynn Mally’s book Culture of the Future (1990), which chronicles Furnace and also the contentious, short-lived organization Proletkult, which had local chapters with their own publications. “No one could agree,” Droitcour relayed, “what proletariat culture should be like.” The population of Soviet Russia comprised what could be called “museum burners,” those who wanted to flatten the institutions to create a clean slate, and “heritage studiers,” those who tried to figure out what might be salvaged from the past. The critic, journalist, and government official Anatoly Lunacharsky, for one, desired to erect new structures from the bricks of the old ones. Proletkults initially encouraged amateurism as a way of challenging the status quo but by the 1930s began to affirm the old values. Vernacular culture, Droitcour said, was taken up in an essay by Dubravka Ugresic in her book Karaoke Culture (2011), Droitcour told us, which argues that amateurs ought to know their place. What a party pooper! 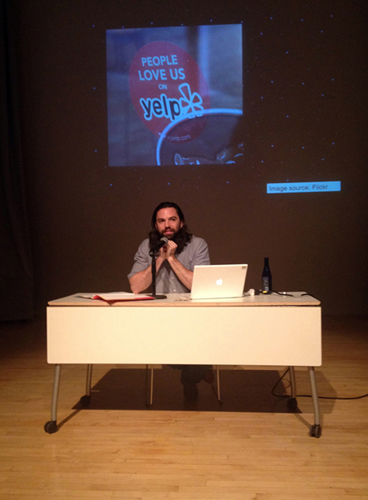 Does Yelp love Brian Droitcour back? (photograph by Christopher Howard)

Moving to the present day, Droitcour explored the conflict of personal subjectivity in the age of smartphones. Corporations take subjecthood from people, he said, and people must behave like corporations in matters of sex, love, and social reproduction, developing and marketing their own personal brands.3 (The idea of “selling yourself,” however, certainly dates to the beginning of human civilization.) Yelp models this situation but adds a twist: content on the website and the app depends solely on voluntary writers, but the company eventually usurps the role of the writer, such as when restaurant owners place signs in their windows that boast “People love us on Yelp.” Droitcour feels that Yelp helps to destroy the old forms of public influence and control, such as the consistency of message in advertising, and thus upsets the stability of the bourgeoisie. Yet the same corporations that cannibalize personal affect, he continued, present themselves as neutral, even benign. The Yelp logo, Droitcour said, “doesn’t represent [any emotion] in particular,” and his contributions to the site don’t necessarily demonstrate “how I feel about Yelp values.”

Exposing the establishment’s cracks and fissures is generally good, but the cannibalization of individual subjectivity quickly seals them up again. What makes the situation even more paradoxical situation is that Yelpers have strong opinions, but often over trivial matters, at least from an economic or political point of view. Droitcour cited a review of a Burger King in Rhode Island—indeed, many fast-food restaurants and chain stores strive to provide a standardized experiences but are always subject to individual responses dependent on idiosyncratic factors that corporations cannot control. By reviewing each establishment individually, diners and shoppers can finally express what it means to “have it your way,” or at least, “this was the way I had it.” Yelp is democratic because everyone gets a voice, and while a consensus isn’t reached, it continually evolves. The art in galleries and museums, the food at Burger King, and the experience of a hair salon are all fair game, Droitcour emphasized. Such a description, though, isn’t entirely fair, since smaller, independent businesses have more to gain or lose through Yelp, unlike places such as Olive Garden and CVS Pharmacy, which safely offer corporate stability that is impervious to complaints. 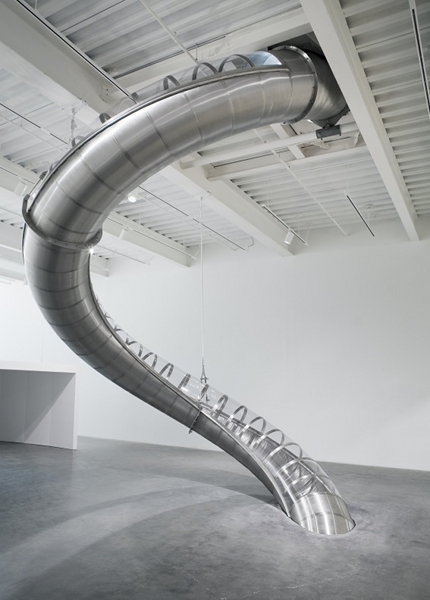 What does the art world have at stake? It’s hard to say. Whether positive or negative, a review on Yelp is not likely to influence museum exhibition practices or commercial gallery sales, nor is it likely to affect foot traffic. Publicity and marketing departments may notice a Yelp review, and maybe a curator or two will read a visitor’s response, but criticism on Yelp will probably not dent decision making and power relations at established art institutions. Droitcour read aloud portions of a Yelp review of Carston Höller’s exhibition Experience (2011–12) at the New Museum from Lisa B., who expressed bewilderment. “I don’t understand it,” she wrote. (Droitcour claimed that the Höller show earned the most one-star reviews of the New Museum.) Interpreting this and other reviews, he argued that these Yelpers are not rejecting contemporary art categorically but rather are protesting its incomprehensibility and homogeneity. Even the art historian David Joselit, Droitcour said, gave Experience a “one-star review” in Artforum. “Lisa B. and David Joselit are basically saying the same things,” Droitcour insisted, which is true only because both writers gave a thumb’s down to the frustrating show. The positions in the two reviews, though, are radically different, as Joselit situates the exhibition within recent art history and current events, while Lisa B. complains about having to wait in long lines for what turned out to be an underwhelming experience. One would hope that a shrewd, perceptive denunciation of an exhibition from a respected art-world figure like Joselit would make a director or trustee pay attention, but would such a text have the same impact if he had yelped his opinions?

After an aimless Q&A with audience members, Droitcour concluded his talk with thoughts about Hegel’s master/slave dialectic, thinking of Yelpers as serfs toiling the digital soil of social media. The vernacular was the language of slaves, he proposed, and online criticism can emancipate them from their tasks. On a personal level, Yelp helps Droitcour loosen up his own production. “Why not write in the vernacular?” he said. “It works for me.”

In Terms Of count: 2 (one of which came from Droitcour, who looked me in the eye at the moment the words left his mouth).

1 The talk coincided with a curatorial project for the web, Fifteen Stars: An Alternative View of the Museum, for which Droitcour asked seven artists—“all of whom [were chosen] based on their pre-existing participation in social media communities (like Tumblr and Dump.fm)”—to illustrate five Yelp reviews of New Museum exhibitions. Here are Droitcour’s thoughts on the project.

2 An explanation: Droitcour’s Yelp reviews are regularly voted “useful,” “funny,” and “cool” by fellow contributors, which indicates that people read them. Furthermore, because of his novel approach to art criticism he has gained recognition and notoriety that has led to a paid speaking engagement at the New Museum, among other opportunities.

3 In a Facebook message, Droitcour clarified his position: “I don’t say that they must [behave like corporations…], I say that the currently dominant ideology says that they must, and I’m interested in people who don’t do that.”