And Then We’ll Dissolve the State

The “Marxist” viewpoints are familiar. What surprises is that in 1976 we could still print the term “social man” without comment—although whether the usage is Lippard’s or the writer’s is not clear. 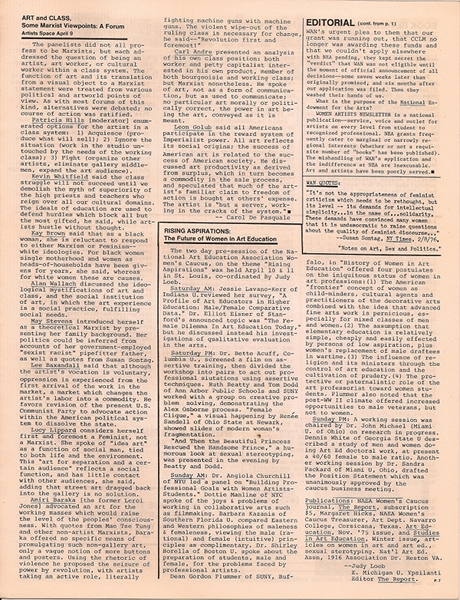 The panelists did not all profess to be Marxists, but each addressed the question of being an artist, art worker, or cultural within a class system. The function of art and its translation from a visual object to a Marxist statement were treated from various political and art-world points of view. As with most forums of this kind, alternatives were debated, but no course of action was ratified.

[Patricia] Hills enumerated three options for the artist in a system: Acquiesce (produce what will sell); ignore the situation (work in the studio untouched by the needs of the working class); or fight (organize other artists, eliminate gallery middlemen, expand the art audience).

Kevin Whitfield said the class struggle will not succeed until we demolish the myth of superiority of the high priests and teachers who reign over all our cultural domains. The ideals of education are used to defend hurdles which block all but the most gifted, he said, while artists hustle without thought.

Kay Brown said that, as a black woman, she is reluctant to respond to either Marxism or feminism—white ideologies. For black women, single motherhood and women as heads-of-households have been givens for years, she pointed out, whereas for white women these are causes.

Alan Wallach discussed the ideological mystifications of art and class and the social institution of art, in which the art experience is a social practice, fulfilling social needs.

May Stevens introduced herself as a theoretical Marxist by presenting her family background. Her politics could be inferred from accounts of her government-employed “sexist, racist” pipefitter father, as well as her quotes from Susan Sontag.

Lee Baxandall said that, although the artist’s vocation is voluntary, oppression is experienced from the first arrival of the work in the market, a market which changes the artist’s labor into a commodity. He favors revision of the present U.S. Communist Party to advocate action within the American political system to dissolve the state.

Lucy Lippard considers herself first and foremost a feminist, not a Marxist. She spoke of “idea art” as a function of social man, tied to both life and the environment. This “art for separation and a certain audience” reflects a social function, and has little contact with other audiences, she said, adding that street art dragged into the gallery is no solution.

Amiri Baraka (the former Leroi Jones) advocated an art for the working masses which would raise the level of the people’s consciousness. With quotes from Mao Tse Tung and other non-artist Marxists, Baraka offered no specific means of promulgating such non-gallery art, only a vague notion of more buttons and posters. Using the rhetoric of violence, he proposed the seizure of power by revolution, with artists taking an active role, literally fighting machine guns with machine guns. The violent wipe-out of the ruling class is necessary for change, he said: “Revolution first and foremost!”

Carl Andre presented an analysis of his own class position: worker and petty capitalist interested in his own product, member of bourgeoisie and working class. But, he said, he is a Marxist nonetheless. Andre, who sees no particular art as morally or politically correct, does not consider art a form of communication. He finds art’s power to be the art, conveyed as it is meant.

Leon Golub said all Americans participate in the reward system of imperialist power. All art reflects its social origins; the success of American art is related to the success of American society. He discussed art as derived from surplus, which in turn becomes a commodity in the sale process, and speculated that much of the artist’s familiar claim to freedom of action is bought at others’ expense. The artist is “but a server, working in the cracks of the system.”

Written by Carol De Pasquale, “And Then We’ll Dissolve the State” was originally published in Women Artists Newsletter 2, no. 2 (May 1976): 7; and reprinted in Judy Seigel, ed., Mutiny and the Mainstream: Talk That Changed Art, 1975–1990 (New York: Midmarch Arts Press, 1992), 39. In Terms Of thanks Midmarch Arts Press for permission to republish this review.