What did this evening’s panelists—three artists who had moved to New York from across North America around the turn of the century—have in common? If you guessed a burning desire to find success—whether that be money, fame, or gallery representation, or just an audience for their work—you’d be wrong. The correct answer is couch surfing. All three artists, Noah Becker, Sue de Beer, and Ryan McNamara, none of whom is a native New Yorker, spent many nights crashing on their friends’ sofas without a place of their own. In fact, de Beer was sleeping on a friend’s couch during her breakthrough appearance in the 2004 Whitney Biennial. “New York Practice,” moderated by Meaghan Kent, director and chief curator of SITE95, an exhibition and publication platform whose current project is Dead in August, brought the artists together to talk about life as an artist in New York—certainly a trite topic but one that is endlessly intriguing, because everyone has interesting or unique stories to tell. “What brought you here?” she asked the panelists. 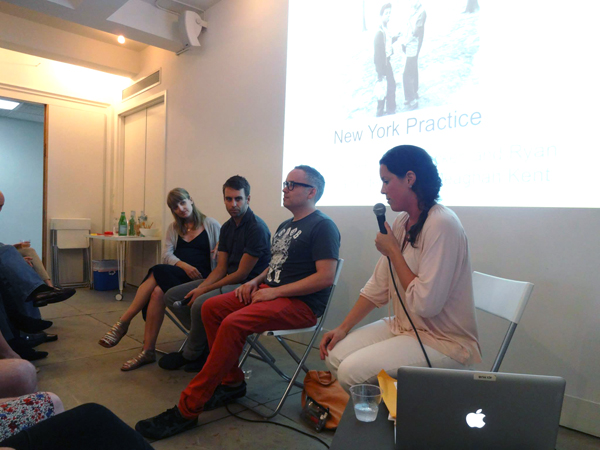 A saxophone player as well as a painter, Becker moved to New York from Cleveland because he followed a friend who joined the downtown jazz crowd. Growing up in Arizona, McNamara was drawn to the Big Apple by three things: Interview magazine, which once focused more on New York life than on celebrities; a documentary film on drag scene, Paris Is Burning (1990); and the annual club-kids episodes of Geraldo. None of these, he said, has anything to do with his life now. De Beer moved to New York at age seventeen to attend art school, dreaming of the Velvet Underground and Andy Warhol eras. Theirs was a time, she said, “when you could be broke, gracefully.” McNamara felt no nostalgia for his early days, when he worked a succession of crappy jobs, mostly as a photographer’s assistant. “Photographers actually live up to their sleazy reputation,” he half-joked.

Kent had assembled the trio of artists because collaboration is a key element of their work. McNamara’s recent exhibition Still, held at Elizabeth Dee in spring 2012, was predicated on having a continuously replenished crowd of visitors to participate in staged “performances” with props and set pieces that were photographed and published online. Kent noted a certain leveling effect there, as both distinguished collectors and casual gallery goers could become the subject of art. McNamara recognized that a similar project in Rotterdam would have less street traffic, so he introduced custom-made live performances based on answers to survey questions, provided from both visitors to the physical space and contributors online. Even though watching remotely, the latter group chose “no” when the survey asked “Do you want us to involve you?”

The maker of videos and installations, de Beer naturally collaborates with others, most recently with the Martha Graham Dance Company and the artist Nathaniel Axel, but she often works alone, happily, from her bed. Currently interested in Christmas and suicide, she casted a current work through Backstage and Craigslist classifieds, finding people who wanted to be Santa Claus or the Ghost of Christmas Past. So she had Santa play a shoplifter (based on a scenario written by Axel). Considering the differences between working in Berlin and New York, de Beer has found it easier to secure a three-thousand-square-foot space in the German capital whenever she is ready for a shoot.

As the publisher of the online Whitehot Magazine, Becker has worked with three hundred writers and published three million words since 2006. A mental breakdown in 2005 in which he considered quitting the art world prefaced his decision to found the publication. At the time, he stated, “the art world on the web was nonexistent” except for Artnet Magazine and Artforum. Seven years later, Becker still finds the situation lacking. With about ten skilled editors, Whitehot is open to publishing undiscriminating work by a wide range of contributors, from established professionals to nineteen-year-old artists and critics. Becker has also directed a documentary film, New York Is Now (2011), which features thirty-eight artists.

The conversation turned to geography but thankfully not real estate. McNamara felt that the solidarity of neighborhoods doesn’t matter anymore in New York’s huge art world, but that’s not without its difficulties. It takes an effort, he said, to reach out to people in other fields, and cross-pollination no longer results from meeting people at a local bar or loft party or, as de Beer wryly put it, “waking up on their couch.” Today’s collaborations are formed professionally, such as when, for example, curators play matchmaker by bringing in a choreographer to work with an artist. McNamara even cold-called dancers to help with a five-month performance piece at MoMA PS1, for the 2010 iteration of Greater New York. With a low- or no-budget situation, he paid them twelve dollars a day out of his own pocket, bankrolled by a sale of a photograph. Twelve dollars buys a “nice lunch,” he said.

An audience member posed the inevitable question about selling art, to which the panelists responded good naturedly. De Beer said, “People buy massive video installations. I can’t believe it’s true.” She has also begun releasing her videos online, with encouragement of the folks from UbuWeb—she was jealous of the artists already on the archive website and wanted to join them. Relatedly, De Beer wondererd about the lack of bootlegs of her films on the internet: “Why hasn’t anyone stolen my films?” Becker summed up the art-market situation with a classy answer: his paintings are for sale but are not made for sale. McNamara reminded the audience that not every collector buys art to invest. “The people who collect my work are nice,” he disclosed, adding that he does not know anything about the auction world. 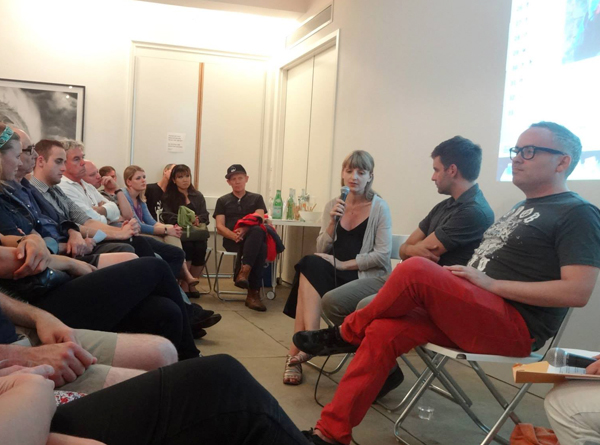 Kent asked the panelists if an artist must live in New York to be successful. McNamara, excited by the wealth of culture within the five boroughs, said that it’s great place to be in the audience, and that the city is as exciting for accountants as it is for artists. De Beer would miss her friends and New York’s extraordinary people if she lived elsewhere (which she has). With eye-rolling humor, Becker deadpanned that he would miss the wealth of dry cleaners and laundromats if he moved away. Where else might they live? McNamara didn’t name another city. De Beer would consider Cologne and also Detroit, which she has never visited. Becker would return to the Gulf Islands of British Columbia, where he has lived before. “I don’t dream of mansions,” he resigned. “Those days are over.” De Beer immediately responded, “I still have dreams … about everything.”