Before and after Institutional Critique

I caught Rhea Anastas’s paper, “Untitled by Andrea Fraser: A Short Reception History 2002–5,” in a 2006 CAA Annual Conference session chaired by Andrew Perchuk and Matthew Jesse Jackson called “Before and after Institutional Critique.” Rather than summarize Anastas’s enlightening talk or describing Fraser’s video from 2003—if you know it, you know it—I want to offer two thoughts, on both the audience for the work and the artist herself, that popped into my head while listening to Anastas speak. 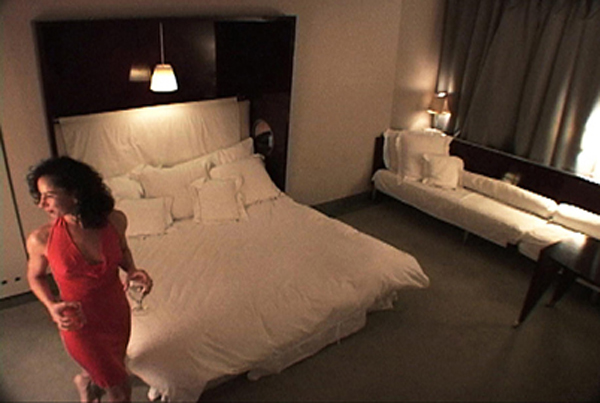 First, those people who get red in the face denouncing the artist and the video as pornography, as market complicity, as selling out, as completely lacking any solid critical position, have generally failed to separate Fraser the person and artist from the performing subject of most of her work, including Untitled. To be sure, the artist’s performances are an extension of her beliefs about the art world, but a division between the person and the performer—a willing suspension of disbelief, if you will—is necessarily to approach Untitled without resorting to reactionary or overmoralizing opinions. Most commenters have not done this. Perhaps this is not a parallel example, but a video of Bruce Nauman walking around the perimeter of a square in an exaggerated manner doesn’t say a whole lot about the artist as a person in the way many say Untitled does for Fraser. When I witnessed Fraser enacting Official Welcome (2001) last year at Dia:Chelsea for a book-launch party, I didn’t read the performance as autobiography at all. Perhaps Untitled should be seen in the same way.

Second, Anastas claimed that the press release for Fraser’s show at Friedrich Petzel Gallery in 2004 gave just factual information about the video’s production and commissioning and not much else. Such secrecy, of course, will lead to all sorts of speculation on the artist’s motives, intent, the conditions of the filming, and so on. Anastas revealed that Fraser has screened the work privately for friends (Anastas included) before it was shown publicly, and that the artist has talked about the work at length with her and others. If there’s so much misinterpretation going on, then it’s up to Fraser to come out and speak publicly, and loudly, about exactly what the work is about. If, as Anastas stated, the “nearly $20,000” price tag for the video is wrong, why won’t Fraser say how much it really costs? Why won’t Fraser denounce the critics and tell us what she was up to?

I answer my own question to the artist somewhat here, in a fall 2004 interview published in the Brooklyn Rail. Fraser discussed not the content of the work but rather its “conditions of presentation and distribution”:

Institutional critique is supposed to demystify, to lay bare what is always been hidden or suppressed, but Fraser turns the tables and hermetically reshrouds the work, and to make a good point. But why do so? It seems as if Fraser recognizes something in Untitled that she finds disturbing, and I’m not sure how sealing off the work, instead of making it public, follows the ideals of institutional critique. Perhaps silence weakens, rather than strengthens, this line of artistic criticism.

Untitled is far from Fraser’s best work, but it’s the certainly the most sensational.

Postscript: Someone in the CAA session’s audience was snapping cell-phone photos of the slides from Untitled that Anastas put on screen. The same thing happened when I saw Official Welcome at Dia last fall, where some “dirty old man” began taking pictures with a disposable camera when Fraser started removing her clothing. The unmistakable plastic zipping sound when advancing the film roll was audible to everyone.

This post was originally published in the CAA Annual Conference Blog on February 25, 2006.