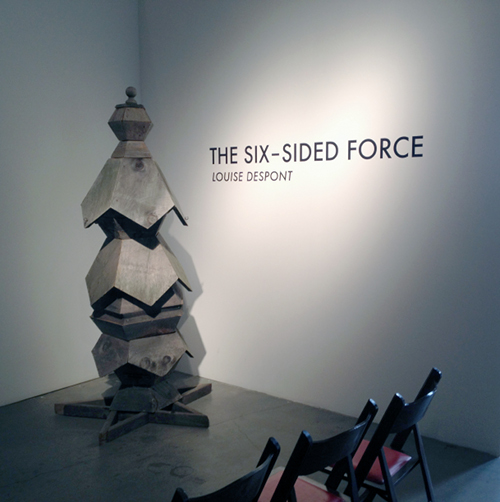 Pioneer Works in Brooklyn hosted a lecture, titled “Sacred Geometry and the Architecture of Well-Being,” by the upstate New York gardener and apiarist Ron Breland in conjunction with The Six-Sided Force, an exhibition of drawings by Louise Despont that take their inspiration from the hexagon of the honeycomb.

Sporting a white beard, a gray mullet, and the normcore outfit of a high school teacher, Breland clearly had the eccentric polymath look down, and his wide-ranging talk surveyed scientific knowledge and folk wisdom, pragmatic environmentalism and esoteric spiritualism. For over an hour he talked about sacred caves, Greek mythology, and the vesica piscis (the shape of the overlap of two circles in a Venn diagram). Breland also discussed the physics of Ernst Rutherford and Werner Heisenberg, the woman’s face in Henri Matisse’s famous The Large Bathers (1906) in Philadelphia, stories by the humanitarian author Barry Lopez, and the work of the environmental architect Jérôme Sperling. Above all Breland was there to promote the stewardship of bees—not necessarily the production of honey—with the goal of bringing the art of beekeeping to the artistic community. 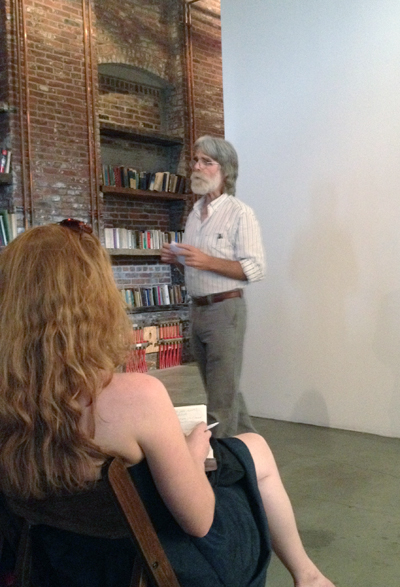 The shape of a hive is inconsequential to the activity of a bee colony, Breland said. Bees can create homes in dead tree stumps, hang them from tree branches, or build them in the boxy cabinets that humans use for efficient honey harvesting. The nineteenth-century American teacher and pastor Lorenzo L. Langstroth patented a modular hive in 1852, and the form hasn’t changed much since. These hives, in which rows of square frames can be removed, replaced, and manipulated for the ease of commercial honey production, result in a “mechanical relationship to the bees,” he said. “All amazingly logical.”

Managed bee colonies in the United States, Breland told us, have decreased more than 50 percent since the late 1940s. He blames what scientists call colony collapse disorder on an unchecked military-industrial complex that has manufactured pesticides and fertilizer as well as bombs. He also faults a lack of communication between left- and right-brain worldviews. Breland said that fixing watches, building railroads, and waging war are all right-brain activities, and to illustrate this point he showed a clip from the Martin Scorsese film Hugo (2011), which highlights the importance of both heart and mind. Breland then showed a snippet from a video on Frank Gehry’s Guggenheim museum in Bilbao, Spain, which in the context of the talk exemplified a refined combination of creativity and engineering—minus, of course, the cultural, economic, and political impact of the building. For Breland, this combination of art and science creates a quintessential relationship that a beekeeper needs “to get us out of this mess.” 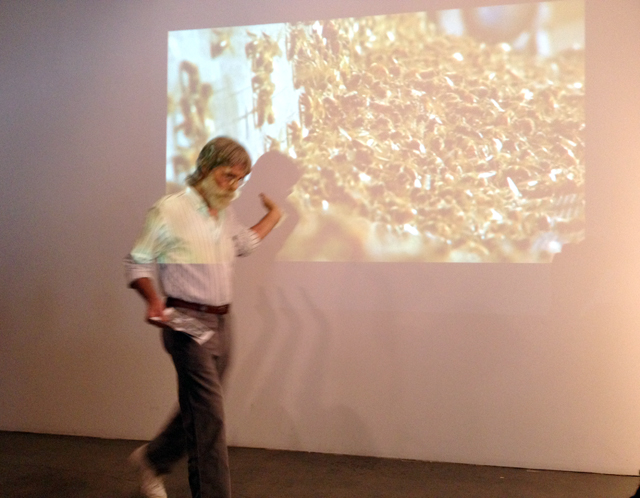 Running with the bees (photograph by Christopher Howard)

Many years ago Breland set out to invent a new hive that would reduce environmental stress on bees (when colonies are transported geographically) and to offer a structure for which harvesting honey was not its primary purpose. He had designed six-sided structures to resemble the honeycomb shape, but this direct correspondence didn’t feel right. What about five, since that’s the number of man? Some say the dodecahedron, a complex polyhedron that features twelve flat pentagonal faces, has mystical qualities. The ancient Greeks understood the notion, as this particular geometric figure has been associated with the five Platonic solids.

So, in the late 1990s, Breland built a hive, which is about six or seven feet tall, that used the dodecahedron form. His creation intentionally resemble the modernist sculptor Constantin Brancusi’s Endless Column. Based on photographs of his self-described ecofriendly, sustainable, specialty nursery in West Nyack, New York, Breland has built about a dozen of them. “This hive is not for honey,” he stated. Anne Raver described the results in a 2001 New York Times profile, “In industrial beehives, the bees are regimented: they are given wax cells larger than they would build, and the queen is tricked into laying more eggs. In Mr. Breland’s hive, the bees build their own cells, and the queen moves freely among them.” 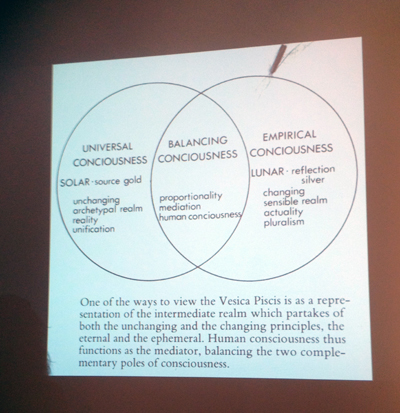 Balancing consciousness with the vesica piscis (photograph by Christopher Howard)

Breland articulated humanity purpose as a desire to express love, to understand beautiful, miraculous phenomenon, and to do meaningful work—not simply to chase the bottom line. “In commerce there’s no hope for a remedy,” he warned. While I generally agree, I’d like to see investors help Breland to mass-produce his hive—with quality, sustainable materials, of course—and help to spread them across the country. Perhaps doing so would help alleviate the need for professional apiarists to haul five hundred boxed hives on a flatbed truck around the Southern states, traveling up to 20,000 miles, in order to aid pollination in places where bees are lacking. And besides, these hives look really, really cool.

Toward the end of his talk Breland brought up the biological concept of the superorganism, which occurs when species such as bees, ants, and termites instinctively delegate responsibilities in order to accomplish a task—the collective transcends the efforts of the individuals. “Some say that is an image for mankind,” he observed.