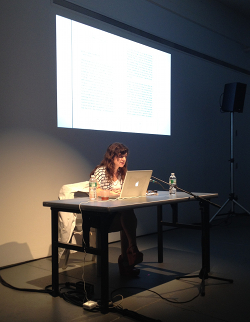 If I understand her convoluted comment-question correctly, an elderly woman in the audience wanted to know, during the Q&A session, if the speaker, Frances Stark, had just done a performance. Based on Stark’s zigzag lecture on her relationship to the artist Robert Ryman, I had wondered the same thing. For about an hour the Los Angeles–based artist covered a range of topics, which seems typical of her multidisciplinary practice that embraces expository and confessional writing as well as visual art in diverse media (drawing, collage, photography, video, and performance). By the end it became clear that Stark’s talk was among the most bewildering and cryptic that I’ve ever attended, and I can’t decide if my frustration is justified—that Stark meandered without having anything substantial to say—or if I just didn’t get it. For the record, the artist did not disclose to the audience that a performance had taken place.

Such confusion shouldn’t be surprising, since the work of both artists often perplexes and befuddles, from Stark’s rambling online conversations turned into video to the oblique materialism of Ryman’s career-long exploration of the color white. Tonight she emphasized tenuous connections between her and Ryman, comparing, for instance, the square shape of his paintings to her Instagram feed. Throughout the event Stark read from her “Scared to Death” essay, published in an exhibition catalogue in 2001, which includes a brief, humorous comment on Ryman. Perhaps for this reason Dia invited her to speak on him for its Artists on Artists Lecture Series. 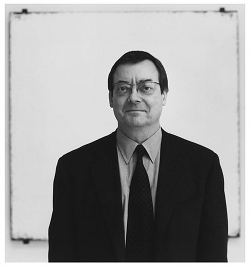 Robert Ryman guarding his own art (source of photograph not known)

In the passage Stark recounts the plot of a novel that takes place in a museum, in which a guard was a central character, and retells the story of when Ryman decided to become a painter while working as a guard at the Museum of Modern Art in the mid-1950s. “[H]is first ambition was not to be a cop but a musician,” Stark read aloud, “and now, of course, he is known for his paintings not for his style of guarding them.…”1 Three of her artist friends in California—Jason Meadows, Richard Hawkins, and Morgan Fisher—all “were enamored of Ryman’s paintings, and I, too, am enamored of Ryman’s paintings. I struggled to speak of this fascination with Ryman’s work, and, embarrassingly enough, found myself asking, Is this some kind of mysticism?”2

Stark’s stated aim tonight was to share, not to theorize, as well as to demonstrate overlaps and rhymes between her and Ryman. “That’s a concept I learned from Emily Dickinson at age fifteen,” she said. As a humanities student at San Francisco State University, where she studied art history, “I came to art as a reader,” Stark told us, “with aspirations to be a writer.” In the early 1990s she identified as a visual artist and attended graduate school at Art Center College of Design in Pasadena, though she felt that people favored her writing to her art as the decade commenced. As an MFA student Stark was exposed to Ryman after others had recommended him to her. At the time “the work didn’t turn the lights on,” but she eventually warmed up to it. After being asked to participate in an exhibition of favorite books, she recalled offering Henry Miller’s Tropic of Cancer and a book about Ryman. 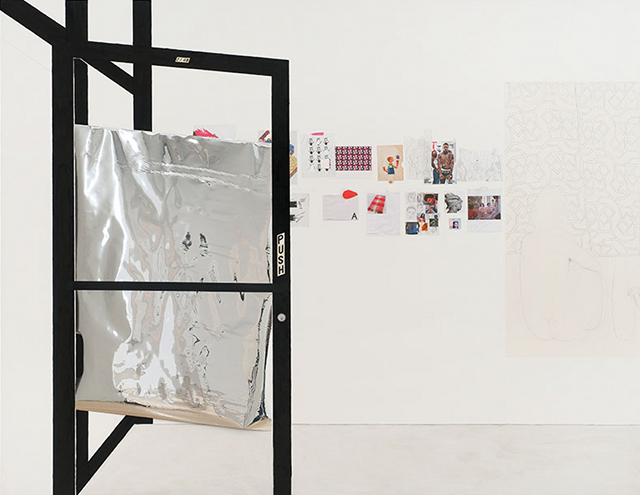 Stark’s narrative slipped in and out of consciousness, with seemingly unscripted observations based on her prepared digital slide show. One pair of images juxtaposed Henri Matisse’s Red Room (1908) with Studio View (1959), a black-and-white photograph that Ryman had painted red. Stark then dwelt on a 1964 Ryman painting next to a photograph of his studio and uttered something about their mutual project of “creating vehicles for methodical making,” but the synthesis of these pairings didn’t produce a clear meaning for me. The head-scratching continued when Stark announced that “people love people to stand in front of things and explain” before playing a recent video interview of herself, filmed at the Museum of Modern Art, on the screen behind her—but without any sound.

Perhaps Stark was suffering from a fatigue of speaking engagements. She admitted that she talked herself out in early May through participation on a panel on Sigmar Polke, who has a retrospective at MoMA, and at Rhizome’s Seven on Seven conference, where she was paired with the technologist David Kravitz from Snapchat to create a new project. Her assessment of Polke’s work was that it looks like splooge and therefore resembles the universe. “Where is the artist in the universe, literally?” she asked before declaring, “Art is where you commune with the dead.” 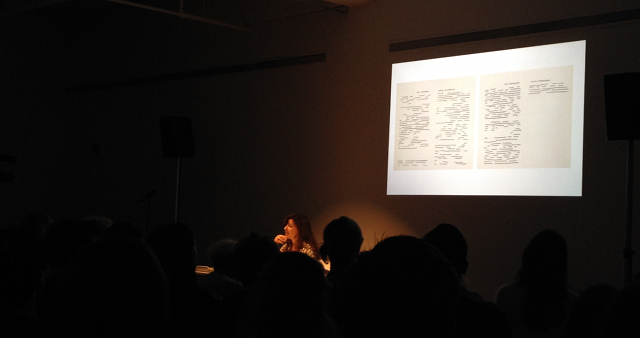 The language of Frances Stark (photograph by Christopher Howard)

Stark talked about the role of artists as educators in a university, telling her students who say “I want to make a style and get famous” that, in stark contrast, “being an artist is to fall in love with another artist.” Paraphrasing Alighiero e Boetti, she identified the artist as both a shaman and showman, fake yet sincere. “The fake being in the service of the real,” she explained, “not as a sham but as an inescapable condition.” Stark concluded her lecture by adducing “fake texts” and “ghost texts”—if “Greeky Lorem Ipsum” isn’t the title of a work by Stark, then it should be—and remarked that “the mutter reveals something else that you can’t see.” If poetry is language free from utility, then Stark’s use of language is often free from meaning. I’m not sure if the non-sense of her Dia lecture was liberating or hindering, but the ride was bewildering.

This audio of Frances Stark on Robert Ryman was recorded as part of Dia’s Artists on Artists Lecture Series.