This essay is the second of three that reviews a recent symposium at the Solomon R. Guggenheim Museum. Read the first and third texts.

The symposium’s middle part, “Agency of the Everyday,” was a disappointment. Covering Italy ca. 1970, the gregarious Romy Golan, professor of twentieth-century art at the Graduate Center, City University of New York, discussed a few important exhibitions in the country, such as Vitality of the Negative (1970–71), in which each artist received his own room to create kinetic, interactive art, often with elements of refraction, reflection, and projections (and thus without objects). The environments, Golan said, evoked a fun house or nightclub. These installations, she contended, were not truly participatory but rather threw visitors into aggressive environment. 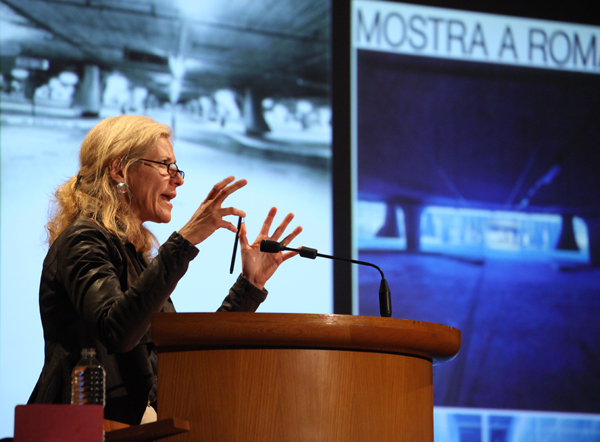 Golan also talked about the Bernardo Bertolucci film The Conformist (1970) as an influence for artists and indicative of Italian culture then, which she said was slow to acknowledge its fascist past. It was surprising to hear that at the time the country had no museum of contemporary art, and exhibitions were staged in unaccommodating buildings in which the architecture frequently upstaged the art. 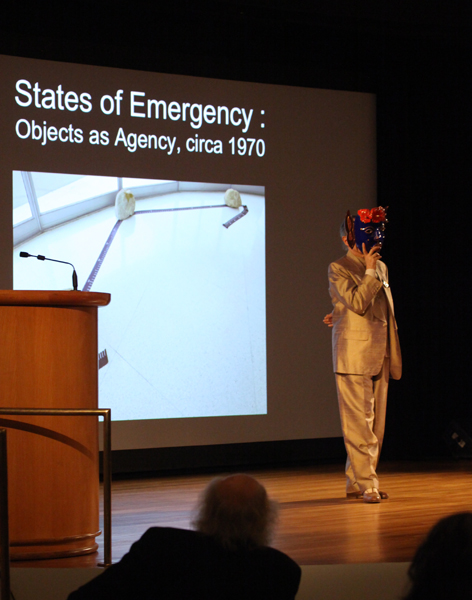 The Italian artist Luigi Ontani took the stage with a funny mask, standing in silence for a few minutes before sitting down, to be joined by his interviewer, the Roman curator Stefano Chiodi, and a translator with an extremely long white beard. Chiodi struggled to describe Italy in the 1970s; the only sense I made was that the street was a place of resistance and people protested with live bodies. The interview suffered for a procedural reason: instead of speaking freely, as Lee had done, with the translator taking notes and summarizing, Ontani gave only a phrase or a sentence at a time. The verbal volleys were hard to follow, exacerbated by the tediousness of his remarks. Ontani sees the gallery as a profane space, a place of magic and mysticism, and he talked vaguely of symbols, allegories, fables, legends, and iconography, as well as concepts of image and nonimage. He also stated that he has created a personal mythology through his self-portraits in tableaux vivants. Despite Chiodi’s allegations that Ontani was a foundational, transitional, and seminal figure in postwar European art, I found his self-absorbed production, shown as projected photographs and video, underwhelming.

In the second section’s summary, David Joselit noticed a corresponding thread concerning the occupation of space and theatricality in Italian culture ca. 1970. Ontani, who emerged after Arte Povera and before Transavanguardia, said the artists in the former movement were his friends, but he preferred imagination, frivolity, and fantasy in art—and vanity and ego, I would add. The 1970s seemed to an anachronic decade for Italian art. Even though Ontani is internationally known and widely exhibited, as Chiodi indicated, his presence has been submerged in mainstream contemporary art. In fact, the reviewer of a 2004 solo exhibition opened his Frieze review like this: “Until he was usurped and updated by the ubiquitous Matthew Barney, the now neglected Luigi Ontani was the cover boy for RoseLee Goldberg’s book Performance Art: From Futurism to the Present (1988).” 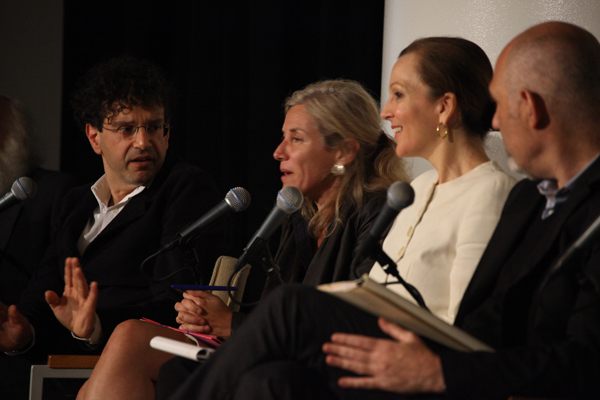 An audience Q&A followed, in which a green graduate-student type stood at the microphone for a couple minutes blindly working her way around convoluted comments that she rightly called “quite complex” before getting to her rather simple question, which I paraphrase as this: What was the American cultural influence on Japanese and Italian artists? The answer—and I think Chiodi was the speaker—was that American art, music, and culture was instantly received in Italy, a country that, as Golan previously noted, had suppressed its recent past, as fascist institutions continued well into the postwar period. (I didn’t catch the connection of politics to art.) Japan likewise repressed its midcentury totalitarianism. It was only Haruki Murakami’s generation, Alexandra Munroe testified (I think), that began to deal with Japanese history and how to represent it.