The Coy and Cagey Object

This essay is the third of three that reviews a recent symposium at the Solomon R. Guggenheim Museum. Read the first and second texts. 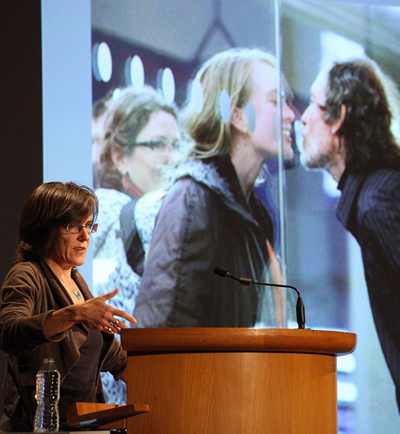 Amelia Jones explains a mark having been made (photograph by Tanya Ahmed and © Solomon R. Guggenheim Foundation, 2011)

The coffee break after the second section was much welcomed, but the talk by Amelia Jones, professor and Grierson Chair at McGill University in Montreal, did little to alleviate my annoyance from the previous section. Jones presented new research on how to think about art after 1960, proposing a shift from object to process and how this shift relates to globalization, digital networking, and a sense of placelessness. She also favored a spatial approach, not a chronological one, and wants to consider art’s political and social aspects. Regrettably, Jones is headed down a well-trodden path, one that has become the mainstream approach to postwar art. While elucidating her approach, she dipped into nearly incomprehensible jargon: phrases such as “logic of latency” and “activating a conceptual body via material traces expressing the work’s having been made” came forth. The latter expression relates to her talk’s title, “Material Traces: Durationality and Meaning Contemporary Art,” but the meaning of “durationality” is completely opaque—it’s not even a real word. The only saving grace of Jones’s presentation was her choice of artists to explore a work’s having been made. She could have chosen the usual suspects, naming Alina Szapocznikow, Vito Acconci, Jay De Feo, Lygia Clark, Allan Kaprow, Ana Mendieta, Richard Serra, Lynda Benglis, and Tehching Hsieh as examples, but instead will opt for two artists closer to her—the painter Mira Schor, a friend; and the sculptor Paul C. Donald, her husband—and the interdisciplinary artist Francis Alÿs, the wild card.

The lively conversation among three Latin Americans—the Cuban artist Tania Bruguera, the German-born, Uruguyan-raised artist and writer Luis Camnitzer, and the Argentine artist, writer, and curator Nicolás Guagnini—set the symposium back on track. Guagnini took the lead, claiming that Conceptual art from Latin America came “two minutes earlier” than the American or European variety and was always more political. He noted that the disappearance question from the first section was not fully addressed but did not expand on it, and then called for a comparative art history with sensitivity toward turmoil and organized political repression. Otherwise, art and its situation will not be fleshed out responsibly. Last, he pointed out that, in the introductions to symposium participants, David Joselit omitted their role as teachers and thus the pedagogical dimension of their professional identity. (At the same time, have you noticed how professors get defensive when you call them “teachers”?) 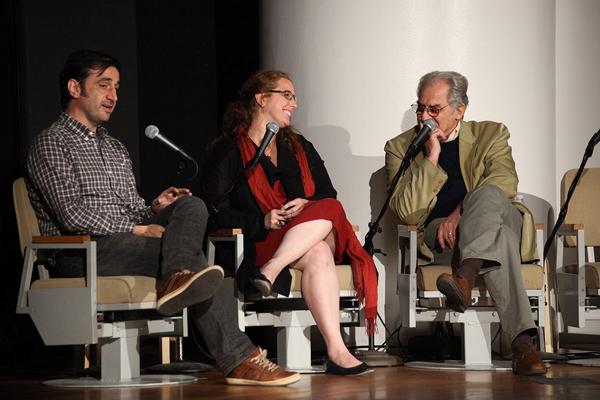 Bruguera believes art has a political context that is lost when exhibited. The position, however, limits discussion about a work during and after its presentation and denies the formation of memories of art. She said that Cuba has become more repressive in 2011 and wants to write a letter to Raul Castro. At the same time, she praised the international machinery that allows Cuban artists to have a voice as “citizens of the biennial.” Some artists get a visa to travel to exhibit as a means to escape—they do not return. For Bruguera, art is best when it’s instrumentalized. Similarly, Guagnini does not mind didacticism. Camnitzer said that art can accept illegal connections that other disciplines do not allow but did not expand on this tantalizing thought, only that art can be a cover for subversion and transgression. Dictators in South America’s past, he continued, thought that art reached only a small audience, one that did not threaten their regimes.  This, artists in the twentieth century worked with persecution. I’d like to hear more about this history. 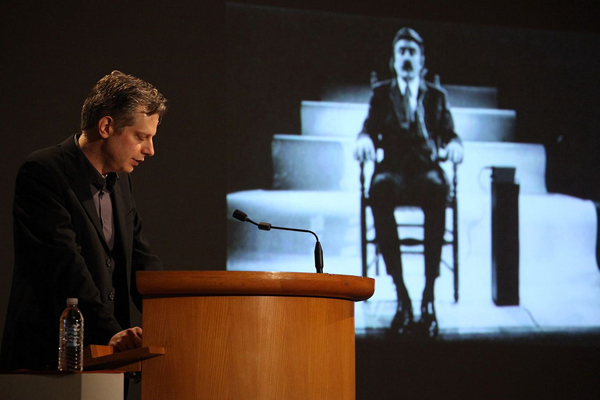 The final speaker, Branden W. Joseph, Frank Gallipoli Professor of Modern and Contemporary Art at Columbia University in New York, approach the symposium topic—the object—through sound art, starting with Max Neuhaus’s immaterial Time Square piece from 1977 in which the body becomes the locus or index of experience, with no authorial imposition. Sound is space, not time. From Neuhaus to Muzak—self-identified audio architecture based on dubious scientific studies (according to Neuhaus) that wanted to create an associative experience, usually related to shopping. Joseph then talked about his primary subject, Manford L. Eaton, a scientist determined to compose music and use electronic instruments to create music based on measurable body activity such as brainwaves, polygraphs, and the like. Such music would be automatic composition but also controlled by the subject through manipulating his or her body. Joseph described Eaton’s activities through the scientist’s essays, pamphlets, and books, such as his first shot across the bow “Bio-potentials as control data for spontaneous music.” Eaton believed his work in electronic music and composition was as revolutionary as the invention of artificial music through built instruments. Eaton’s typo-ridden pamphlet Bio-music further developed his ideas, with his research going deep into affecting consciousness. In the nefarious-sounding 1973 essay “Induce and Control: Bio-music Is Here Today,” Eaton wanted everyone to have the same bodily sensations, even though the resulting music would be different. He even went further, wanting music originating in the brain to be heard without ears—a kind of hallucination made real. Joseph judged this approach to be unethical, whereas Neuhaus and John Cage operated more ethically, with aleatory sounds of piece and place creating an experience, not controlling it. Joseph’s strong presentation was the kind of article Cabinet would publish, but he will likely find an academic journal as his venue.

In the concluding discussion for the entire symposium, Joselit found that the “coyness around the object is unproductive,” but hadn’t quite articulated the original obsession of objecthood to begin with. Continuing her earlier direction, Bruguera concluded that a self-sufficient object lacks experience—which, again, not only shortchanges the viewer but badly underestimates his or her encounter with art. Discussion moved to Marina Abramović’s Seven Easy Pieces, this artist’s reenactments of various other performance artists’ work that were staged at the Guggenheim in 2005 as part of the first Performa. (I witnessed her do Vito Acconci’s Seed Bed.) In a disapproving tone, Bruguera complained that Abramović failed to re-create the conditions of the original performances—but is that even a requirement? A performance of an older work, whether one by William Shakespeare or VALIE EXPORT, would hopefully revitalize the original, giving it fresh meaning. Bruguera, though, favors nostalgia over transformation. So does Joselit, especially in language: for him, we no longer have an original performance; we have an “initial iteration.” It’s amusing to find progressive artists and scholars develop conservative attitudes, resuscitating the author, prizing the original and unique, and forgetting why an artist would choose to work ephemerally. Besides, no one goes to a Paul McCartney concert today expecting John, George, and Ringo to show up too.

According to Joselit, Lee Ufan: Marking Infinity does not allow objects and subjects to fully realize themselves. The artist, he continued, creates fresh encounters, with no attachments to materials or to previous placements and locations—the works are emphatically not site-specific. Lee does not produce work based on instructions, like a Fluxus score; instead he provides, Joselit posited, a different kind of democracy. The aura of authorship remains, but it is one of responsibility, an “ethic of restraint.”

Spurred by Guagnini, the participants onstage—nearly all of them, except for Lee—found it difficult to talk about how Lee’s work is sold, especially Alexandra Munroe, who avoided responding to a simple query that asked if, when purchasing his work, an institution acquired a specific object, a contract, or a set of instructions. She revealed that different museums can own the same piece or composition. She also said that it is unethical to arrange the seven stones in a Relatum from 1971 without the artist, who insists on choosing the stones and arranging the compositions himself. This fueled Guagnini, who must have been thinking about Tino Sehgal’s recent show at the Guggenheim, This Progress (2010), and also an audience member in the Q&A, to press the matter further. This made others anxious. I felt an inane discussion about the art market developing, which I took as my cue to exit. It had been a long day.