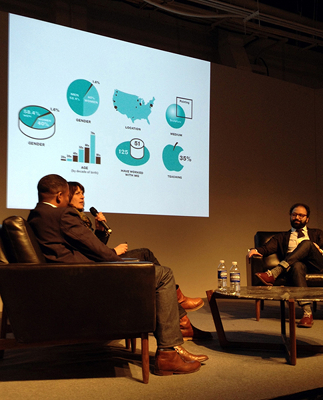 “I’ve been thinking a lot about biennials,” mused the artist Michelle Grabner, seemingly without irony. No kidding—she’s one of three curators of the 2014 Whitney Biennial, which opened to the public on the day of this panel, held at the Armory Show. “Here and Now: Biennials in the Twenty-First Century,” moderated by the curator and scholar Lynne Cooke, assessed not so much the current state of biennials—of which the Whitney’s signature exhibition is a leading example—but rather demonstrated how she and two other panelists have shaken off what some call “biennial fatigue” to reinvent the form and scope of these large-scale, super-hyped exhibitions that take place around the world every two, three, or more years.

Cooke had asked her three participants to present on his or her recent projects before opening a conversation among the group. Dan Byers, a curator of modern and contemporary Art at the Carnegie Museum of Art in Pittsburgh and cocurator of the 2013 Carnegie International, described the origins of his institution’s showcase as conservative and Western but with a widening scope over the years. He and his two cocurators, Daniel Baumann and Tina Kukielski, approached the task with a group of concerns, a “constellation of ideas,” he called them: the exhibition of artists and an exploration of the museum’s collection, of course, but also a close engagement with the host city and a nutty idea about playgrounds.

The team started their work, Byers said, two years before opening day, with a blog, Tumblr, and Pinterest that featured scanned photographs of past iterations of the international along with press clippings and other archival material. The curators also rented an apartment in Pittsburgh for hosting dozens of diverse events “to create a community of conversation” in addition to the show, which he said always “lands like a UFO” in Pittsburgh and “leaves for four years.” Byers showed installation photographs and described artists’ works, which made me wish that I had seen the show, which came across as innovative, thoughtful, and dynamic. I couldn’t help but think, though, how many insatiable curators have cannibalized other parts of the museum—public programming, community outreach, digital publishing—that have typically been the purview of specialists in the education department. Yet I appreciate how Byers emphasized the importance of civic space, whether that’s a private museum or a public library, which is conservative position of a different kind. 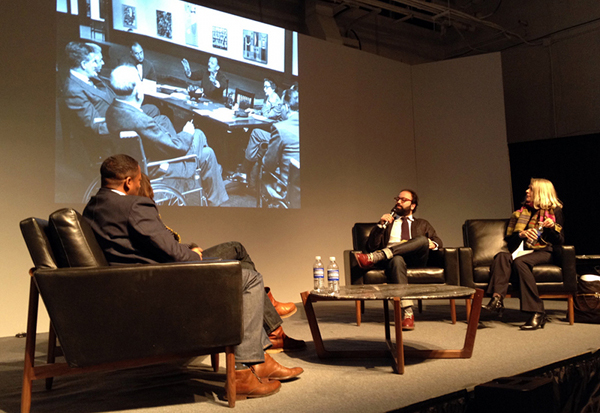 Next to speak was Grabner, an artist and occasional curator who teaches at the School of the Art Institute of Chicago. She claimed responsibility for the Whitney Biennial’s fourth floor and, in fact, relayed that the curatorial team for this year, which included Stuart Comer and Anthony Elms, did not collaborate on anything except on the catalogue design. Each person organized his or her own floor at the museum, and for her space Grabner wanted to establish the idea of building a curriculum for a classroom. Many schools hung portraits of presidents in classrooms, so she put up Dawoud Bey’s portrait of Senator Barack Obama, which the Chicago photographer took in 2008 as a fundraiser for the politician’s presidential run.1 Grabner quickly contrasted Bey’s donation to a political cause to the blurring of aesthetics and activism as seen in social-practice art, hinting that the latter pursuit might be self-indulgent or even misguided. One focus for her floor is abstract painting by women, another is materiality and affect theory, another is criticality—though not, she pointed out, critique shot through appropriation and irony. “By the hour the reviews are coming in,” Grabner said, “and they’re not good.” Self-conscious joking aside, the Whitney Biennial “is a structure that never yields positive criticism.” Just like, she added, how President Obama is relentlessly thwarted by Congress.

Grabner ran through a slide show of her chosen work. One apparent theme is nesting, a type of collaboration that can be either parasitic or symbiotic. The artist Gaylen Gerber, for example, is a “platformist” who makes backdrops to support other people’s work. He will first hang paintings by Trevor Shimizu in his allotted wall space and later present pieces by David Hammons and Sherrie Levine. Elsewhere, Philip Vanderhyden reconstructs People in Pain (1988), a sculpture by Gretchen Bender that fell apart and was discarded after her death in 2004. The Whitney’s Replication Committee, Grabner revealed, had a difficult time accepting the fact that an artist was doing their work. And of Joe Scanlan’s fictional black female artist Donelle Woolford: “Uh, oh. Super problematic!” Grabner exclaimed, this time ironically. The actor playing Woolford is touring across the United States doing a Richard Pryor comedy routine but hasn’t been warmly welcomed everywhere. Thelma Golden, for instance, refused a request for the Studio Museum in Harlem, which she directs, to host a performance. The artist Theaster Gates, though, accepted an invitation for Woolford to perform at Dorchester Projects in Chicago. 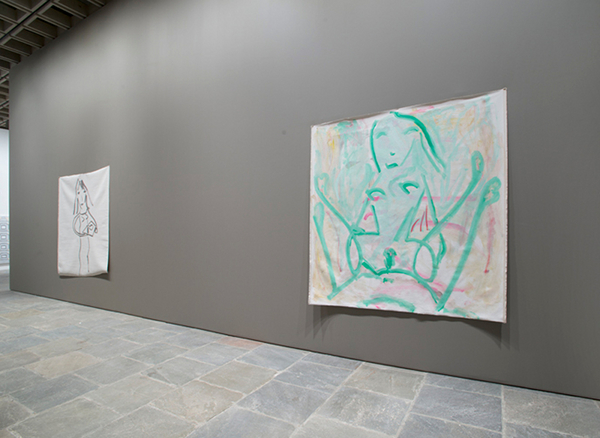 Franklin Sirmans, a curator of contemporary art at the Los Angeles County Museum of Art and artistic director of Prospect.3, said that the third iteration of the New Orleans–centered exhibition will open in October 2014. He expressed a desire to make his show the opposite of Mithra, the Hurricane Katrina–inspired ark that the artist Mark Bradford set in the city’s devastated Lower Ninth Ward for the first Prospect, in 2008—a bold claim for sure. Sirmans didn’t provide many details about his show, mainly because the list of fifty-five artists won’t be announced until May. Instead the curator underscored several important concepts for the exhibition. A historical slant of Prospect.3 looks at Paul Gauguin finding himself in the “exoticized Other” of late-nineteenth-century Tahiti, as well as the Brazilian writer Oswald de Andrade’s “Cannibal Manifesto” from 1928, which proposed a new Brazilian identity based on cannibalizing other cultures, particularly European ones.2 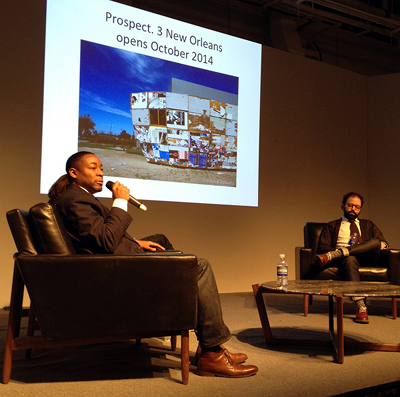 Franklin Sirmans on the mic (photograph by Christopher Howard)

Sirmans borrowed his title for Prospect.3, Notes for Now: Somewhere and Not Anywhere, from Walker Percy’s The Moviegoer (1961), “a small but quiet book that rose to a degree of prestige and prominence,” he said, most notably by besting Joseph Heller’s Catch-22 and J. D. Salinger’s Franny and Zooey, among other novels, to win the 1962 National Book Award. The Moviegoer will serve as a form and an outline for the exhibition, whose twelve to fifteen venues will be scattered across New Orleans, but Sirmans stressed that the show could happen elsewhere, too. And it doesn’t have to reference Katrina, either. Rather, he wanted to know, how we can bridge the gap between an adult boxing gym and the contemporary art center.

The open conversation among the panelists circled around three primary issues: audience, curatorial ethics, and rescuing neglected artists. Grabner said she took the “absolutely selfish” route, organizing an exhibition that she would want to see herself—but also made it for other artists, she conceded. She also wanted to buck the “young new talent myth” that the biennial holds for the art market and highlight artists’ important but often unsung role as teachers. Push back so far, Grabner noted, has been that this year’s biennial is not political enough. Perhaps critics don’t see the right politics, I wondered, or cannot perceive the political nature of artworks that are not overly didactic. 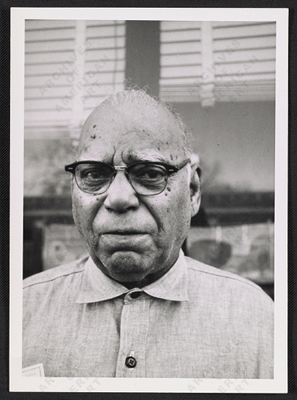 Cooke questioned Byers about the ethics of exhibiting outsider art, since Joseph E. Yoakum (1890–1972), a self-taught artist from Chicago, was a selection for the 2013 Carnegie International. What does it mean to pick this kind of artist, Cooke wanted to know, and drop him in this context? Well, Byers replied, it’s usually the artists who lead him to other artists and other subjects. Sadie Benning and Vincent Fecteau, both in the International, are interested in Yoakum’s work, which Byers described as incredibly beautiful but rarely seen outside the outsider context.3 He captured the wonder we can’t see, the curator marveled, the wonder of Old Weird America. “The act of sharing is one good reason to do it,” he said.

Cooke’s line of questioning irritated me, mainly because she uncritically restated the hackneyed position of exploitation without identifying any problematic issues.4 Exhibitions of folk art have been taking place in galleries and museums for decades, going back to the early 1930s at the Museum of Modern Art, an “ethnographic turn” as noted by Sirmans. The museum also hosted surveys of African Negro and Native American art back then. The panelists didn’t challenge Cooke directly on this point but did say they found nothing unusual with exhibiting ceramics by George Ohr (1857–1918), the notebooks of the writer David Foster Wallace in the Whitney Biennial, and other kinds of not-quite-art material in their shows. 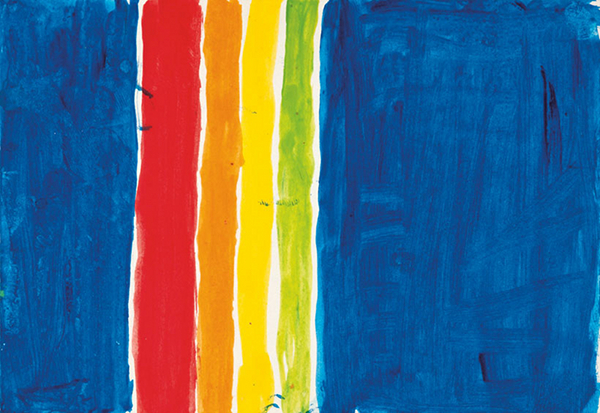 Sirmans, who brought up Alma Woodsey Thomas (1891–1978), a female African American artist who was a Color Field painter in Washington, DC, whose work has been infrequently seen and discussed for many years. He rightly wants to ensure that recuperated artists don’t become a three-year wonder, like the quilt makers of Gee’s Bend, who were in vogue over ten years ago but have dropped off the art world’s radar. “People should make it stick,” Sirmans said of the trend that the critic Roberta Smith has called “no artist left behind,” with the recovered work being more than just a new commodity to buy and sell.5 The funny thing is, one critic fed up with the dominance of the art market, Holland Cotter, is partly responsible for Thomas’s resurgence, as demonstrated in a New York Times article from 2009 that commented on President Obama’s selections for White House decoration; so is the Nasher Museum of Art at Duke University. 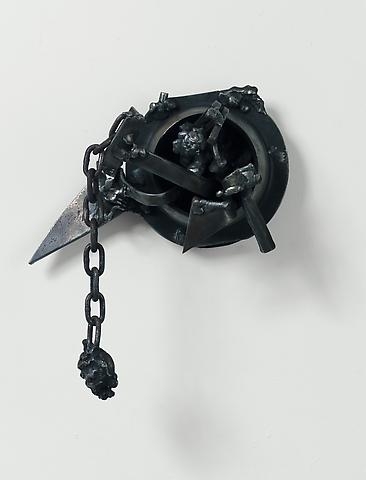 Graber noted that the massive amount of inventory of overlooked artists might be the result of no longer having a monolithic version of art history. “There are huge ethical issues” around inventory, she said, but sadly did not articulate them. Was she referring to how overlooked artists such as Lee Lozano and Steven Parrino now posthumously show in top blue-chip galleries, or that late works by Picasso, previously ? I wonder if all this is an updated version of the old Vincent van Gogh sob story, or Émile Zola’s novel’s The Masterpiece (1886) brought to life?

Personally, I’m grateful for all these rediscoveries, which significantly help to rewrite art history, even as a little money is made. Jack Whitten has received a small bump in popularity since a few vintage paintings were shown in the Rotating Gallery at MoMA PS1 in 2010 during Greater New York (incidentally a large group show that takes place every five years). Furthermore, Seductive Subversion: Women Pop Artists, 1958–1968 at the Brooklyn Museum (and elsewhere) was an eye-opener, and an exhibition curated by Katy Siegel called Americanana, held in a small gallery at Hunter College in 2010, introduced me to the painting of a young artist, Josephine Halvorson, as well as an older one, Melvin Edwards, whose Lynch Fragments were subsequently hung at the Museum of Modern Art and included in touring exhibitions.6 But notice that institutional scholars and curators are organizing these exhibitions, not dealers or collectors.

1 Grabner claimed the photograph could be had for $100 back then, which differs from Bey’s account.

2 Some of these facts were published in Charlotte Burns, “A Sneak Peek at Prospect.3,” Art Newspaper, December 5, 2013.

3 Yoakum had solo exhibitions at several galleries and university museums in the late 1960s and early 1970s, and at the Whitney Museum of American Art in 1972, but not at the Museum of Modern Art in 1971, as the Carnegie International curators insist in their webpage for the artist.

4 One exception is Cooke’s observation that art is everywhere in New Orleans and being made to look like outsider art.