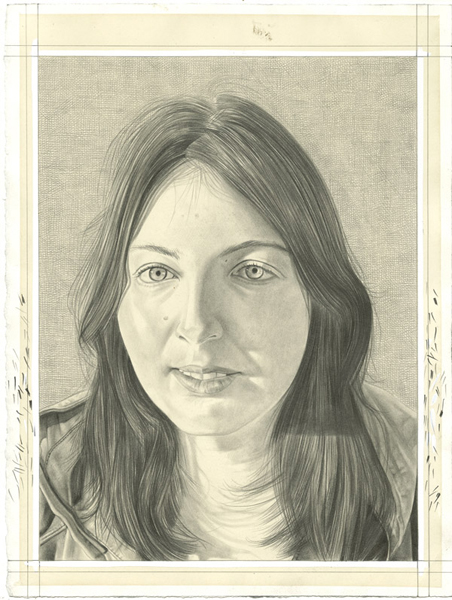 Josephine Halvorson’s manner of speaking—straightforward and lucid with modest confidence—corresponds directly to her intimate oil paintings depicting close-cropped scenes of outmoded factory machinery, walls and doors of seemingly abandoned buildings, and interior views of simple homes, such as a few books resting on a wooden shelf or an empty fireplace. In a recent review, the New York Times critic Karen Rosenberg called her work “rugged, deeply gratifying realism.”

Halvorson’s talk at the New York Studio School coincided with her excellent second solo exhibition at Sikkema Jenkins, called What Looks Back. Taking the podium and adjusting her digital presentation, the artist mentioned that she had previously attended several talks in this very room, and thanked the comfortably full house for coming, despite tempting competition from a Jay-Z concert at Madison Square Garden taking place that same night. Hers was the standard artist’s talk, which she emphasized as a supplement to seeing the work in person or reading about it. Her simple aim was to describe how she works as an artist and how she came to paint the way she does.

As much as Halvorson’s work resists suitable verbal description, or at least strongly favors feeling over words, it is language, she believes, that frames the function of an object. It is also central to her work in another way, as she tries to instill into her students the idea that an artwork should speak for itself. To underscore this point, the artist showed a digital image of Sign Holders, the opening painting of her exhibition, and explained her interest in its absence of language. The work depicts two metal slots in which factory or train-yard workers would position signs, to be changed as often as needed. 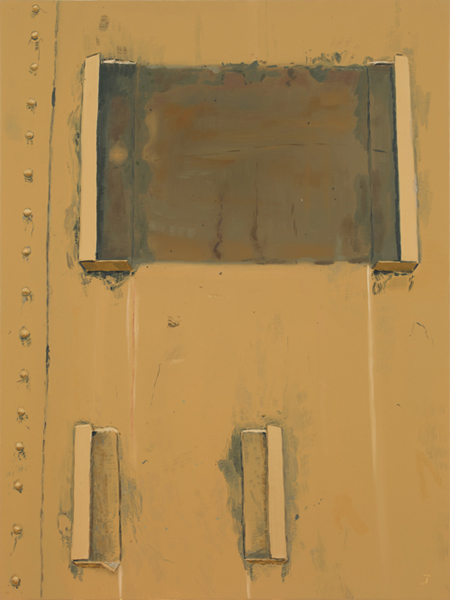 As a painter, Halvorson is not in opposition to, or burdened by, the history of art. If fact, she often “bumps into it,” discovering the nineteenth-century American trompe-l’œil painter John F. Peto without intentionally seeking him. She readily admits a love for the work of Arthur Dove and Jasper Johns and acknowledges both an adherence to the traditional still life and a debt to its major figures, Jean-Baptiste-Siméon Chardin and Giorgio Morandi. Surprisingly, she also credits Roman frescoes as an influence.

Understanding a painting, Halvorson suggested, is actual and associative—what is it as an object, and what does it represent? In graduate school at Columbia University, she set up rebuslike scenes (A plus B equals C) in her studio to paint, a practice she has since abandoned. She has also given up the studio, choosing to work en plein air on a French easel. In this way, she said, her selection of things to paint follows the way of a photographer. Painting objects has remained consistent in her practice, but instead of their relationships adding up to a statement she calls attention to the complexity within a single one. These objects, possessing a “history waiting to be painted,” call out to her. After being painted, they look back. Making a picture that is an accurate representation is not her goal; she is instead interested in a confrontation. Finished in one sitting, the painting is a record of the time she spent with the object. Further, in plainspoken reflexivity, she said she appreciates being able to tell how a work of art, or an object, was made just by looking at it.

Several stories Halvorson told about how a few works in What Looks Back came about, including the “one that got away,” appear in the November 2011 issue of the Brooklyn Rail. In fact, much of the content of her lecture can thankfully be found in her interview with the paper’s publisher, Phong Bui. For the New York Studio School talk, she embellished her anecdotes by projecting snapshots taken during her travels, showing, for example, a canvas (Mine Site) propped into a rental car’s open hatchback because strong Death Valley winds broke her easel. Several photographs of her experience in an Icelandic slaughterhouse, manifested in Carcass, concluded with an earnestly silly shot of her and the slaughterhouse owner standing with the finished painting, not unlike something in a family photo album. 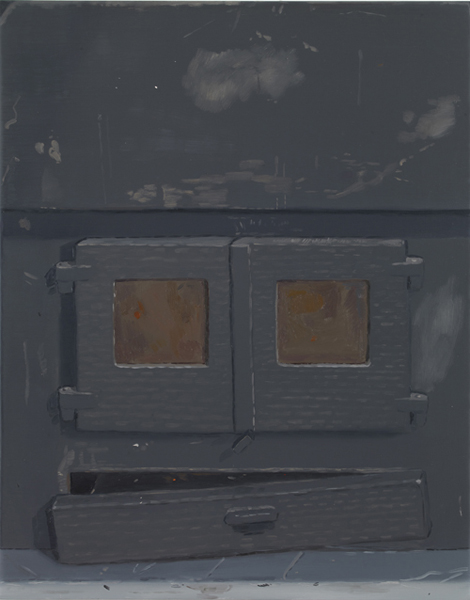 Halvorson talked about her process, disclosing that she spends half her time mixing paint to find the right feel. “Color gives identity to form,” she said. The values in her colors remain consistent, which can sometimes be attributed to overcast days having the most even, consistent light. One audience member asked if, since Halvorson does not maintain a studio to paint, does she have a place to view the work. Yes, the artist replied, because curatorial preparations for her exhibitions go through at least two rounds of editing. The final selection represents all her interests, though she resists a strict narrative. She also wants to avoid redundancy. Someone asked about proximity. Halvorson works at arm’s reach, a conversational distance. The actual Sign Holders, though, were placed higher on a wall in real life. Perhaps, she wondered, a future installation of paintings could take distance into consideration. Last, Halvorson described the gestation process for her work, which can take days to years before she takes the creative plunge. In doing so, she realizes the inner work, the embodiment of preconceived ideas and feelings, using the language of painting.