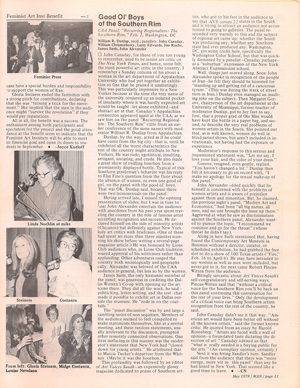 John Canaday, for those of you too young to remember, used to be senior art critic on the New York Times, and hence, some felt, the most powerful art critic in the country. I remember a Sunday column of his about a woman in the art department of Appalachian [State] University who had put together an exhibition so fine that he praised it unstintingly. This was particularly impressive to a New Yorker because at the time the very name of the university conjured up an isolated pocket of insularity where it was hardly expected art would be taught, let alone exhibited—and abstract art at that. Canaday’s Appalachian connection appeared again at College Art [Association], as we saw him on the panel, “Recurring Regionalism: The Southern Rim.” (The title came from an earlier conference of the same name.)

Moderator William R. Dunlap of Appalachian [State] University acted like a suave cosmopolitan—that is, until he exhibited all the worst characteristics the rest of the country might attribute to New Yorkers. He was rude, egotistical, insulting, arrogant, uncaring, and crude. He also made a great show of swilling bourbon from a prominently displayed bottle. Typical of this Southern gentleman’s behavior was his reply to Elsa Fine’s question from the floor about the absence of women, or even one good ol’ girl, on the panel with the good ol’ boys. It was OK, Dunlap said, because there were two homosexuals on the panel.

Having arrived late, I missed the opening presentation of slides, but I was in time to hear John Alexander entertain the audience with anecdotes from the past year which he had spent traveling the country in the role of famous artist, accepting recognition and success. He declared himself on the side of minority artists (Chicanos) but definitely against New York lady art critics with briefcases. (One had spent no more than three minutes scanning his show before writing a several-page magazine article.) He was bemused by Lions Club audiences who, in Lions Club tradition, roared approval of his witticisms rather than applauding. His other adventures ranged the country both sociologically and geographically. Alexander enchanted the CAA audience in general, the women less so.

James Surls, apparently the only member of the panel concerned with human values, was generous in crediting the Dallas Women’s Co-op with opening up the art scene there. They did all the work, he said—politicking, letter writing, and the rest—that made it possible to exhibit art in Dallas outside the museum. He said he himself “rode in on the coat tails.”

Discussion continued as, by and large, a series of rambling non sequiturs. Members of the audience seemed to feel compelled to make statements themselves, like at a revival meeting, and their random statements, usually irrelevant to the discussion, prompted other remotely connected observations. One item surfacing in this manner was the moderator’s statement that New York had “closed down for young artists.” He attributed that to Marcia Tucker’s departure from the Whitney. (Maybe it was the bourbon.)

This profundity was followed by an editor of Art Voices South—an expensively glossy magazine dedicated to praise of Southern artists—who got to his feet in the audience to say that the magazine covers twenty-two Southern states and is trying to attract an audience not accustomed to going to galleries. The panel responded very warmly to this and the subject of regional art came up—whether the South was producing any, whether any Southern state had ever produced any. Washington, DC, got some credit here, specifically the Washington Color School, but that was quickly dismissed by a panelist—Canaday perhaps—as a “suburban” expression of New York Abstract Expressionism.

Well, things just moved along. Soon Alexander spoke in recognition of the people of Iran—he felt they should be honored for “standing up and getting rid of a cancerous tyrant.” (This was the week of street riots in Iran.) Dunlap even managed an insulting joke on the subject. Then Margaret Gorove, chairperson of the art department at the University of Mississippi—and former teacher of moderator Dunlap—got to her feet to say, first, that a proper grad of Ole Miss would have kept the bottle in a paper bag, and second, to describe the very real problems of women artists in the South. She pointed out that, as is well known, women do well in blind-juried shows but aren’t included in invitationals, not having had the exposure or experience.

Moderator Dunlap’s response to this serious and impassioned statement was, “Let me say, I love your hair, and the color of your dress.” Gorove, resigned, even gentle, replied, “You haven’t changed a bit.” Dunlap then felt it necessary to go on record with, “I make no apology for the sexual make-up of this panel.”

Alexander added quickly that he himself is concerned with the problems of women artists and is aware of prejudice against them and minorities. But, he claimed, the previous night’s panel. “Modern Art and Economics,” had been “all big names, all men, and no one brought the issue up there.” Aggrieved at what he saw as discrimination against the Southern panel, Alexander wanted to pursue the topic. “I recommend we continue and go for the throat” (which throat he didn’t say).

Surls mentioned that, having found the Contemporary Art Museum in Houston without a director, curator, or scheduled exhibition, he had grabbed the free slot to do a show of one hundred Texas artists (Fire!). He may have intended to say women as well as men were included, but never got to it, because next came Robert Pincus-Witten from the audience.

Bitingly sarcastic about Art Voices South’s self-congratulatory tone and self-serving ways, Pincus-Witten said that “without a critical voice for the Southern Rim you’ll be back on this panel continuing this conversation for the rest of your lives.” Only the development of a critical voice can bring Southern artists recognition from the rest of the country, he said.

Canaday didn’t see it that way. “American art would have been better off without all the known critics,” said the former known critic. He quoted from an essay by Harold Rosenberg: “Artists are faced with a wall of opinion—a formulated taste dictating the direction of art.” Canaday advised us that “what is really needed is a buying public for the arts.” (An exemplary opinion, certainly.)

Next it was Irving Sandler’s turn. Sandler said from the audience that there was “more energy, more wit in this panel” than any he had heard in New York. That seemed like a good time to leave.

Written by Cynthia Navaretta, “Good Ol’ Boys of the Appalachian Connection” was originally published in Women Artists News 5, no. 1 (May 1979): 11; and reprinted in Judy Seigel, ed., Mutiny and the Mainstream: Talk That Changed Art, 1975–1990 (New York: Midmarch Arts Press, 1992), 120–21. In Terms Of thanks Midmarch Arts Press for permission to republish this review.