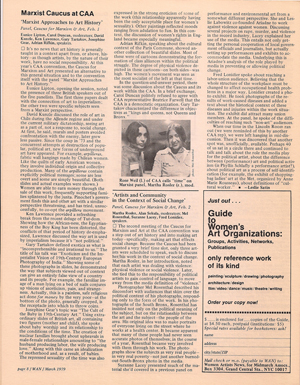 Because the Caucus [for Marxism and Art] had been granted a very brief time slot, only three artists were scheduled to speak, each to discuss her/his work in the context of social change. Martha Rosler noted in her introduction that each of them dealt with violence—physical or social. Later she addressed the need of political artists to gain control of language, to move away from the media definition of “violence.”

Photographer Mel Rosenthal described his discomfort when audiences skim over the political content of his photographs, responding only to the form of the work. In his photographs of the South Bronx he has insisted, not only on political meanings of the subject, but on the relationship between the art and the subject—the people of the area. His original idea was to make portraits of everyone living on the street where he works at a health center. It became apparent that many of these people, with whom Rosenthal became very involved over the course of a year, had never seen accurate photos of themselves. The photographs show them as real people in real poverty—not just another burned-out South Bronx scene from media.

Suzanne Lacy presented material she’d covered in a previous panel on performance and environmental art from a somewhat different perspective. She and Leslie Labowitz cofounded Ariadne to work against violence against women.1 Discussing several projects on rape, murder, and violence in the record industry, Lacy explained their approach, which involves, not just getting the personal cooperation of local government officials and journalists, but actually setting up performances and exhibits for media. This follows Ariadne’s analysis of the role played by media in preventing or allowing political change.

Fred Lonidier spoke about reaching a labor-union audience. Believing that the structure of the workplace must be changed to affect occupational health problems in a major way, he created an exhibit of photographs showing results of work-related diseases and added a text giving the historical context. The exhibit did attract many union members. At the panel, he spoke of the difficulties of reaching such “nonart” audiences.

When our time in the Lincoln Room ran out, we were in mid-discussion, but discovered another spot available unofficially. Perhaps forty of us sat in a circle there and continued to talk and talk about the role media play for the political artist, the difference between performance art and political activism (is Phyllis Schlafly a performance artist?), political art as a process of self-identification, definitions of “cultural worker,” the exhibit of shopping bag ladies’ art at the Met[ropolitan Museum of Art] organized by Ann Marie Rousseau.

1 Ariadne, a California woman’s network, produced public art on political issues from 1977 to 1980.

Written by Leslie Satin, “Real People as Art” was originally published in Women Artists News 4, no. 9 (March 1979): 8; and reprinted in Judy Seigel, ed., Mutiny and the Mainstream: Talk That Changed Art, 1975–1990 (New York: Midmarch Arts Press, 1992), 117. In Terms Of thanks Midmarch Arts Press for permission to republish this review.