This essay is the first of four that reviews “The Koons Effect,” a recent symposium at the Whitney Museum of American Art and the Institute of Fine Arts, New York University. Read the second, third, and fourth texts. 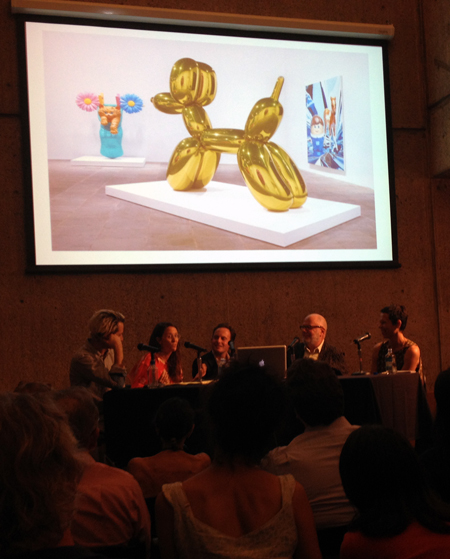 “It was a look of horror … or a smile,” said Scott Rothkopf, curator of the exhibition Jeff Koons: A Retrospective and moderator of a panel discussion called “The Koons Effect Part 1,” regarding the responses he received when telling others of his research for a retrospective on the artist. Artists were interested in Koons, to his surprise, and he noted that Pierre Huyghe is fascinated by the “story that didn’t get made,” and Andrea Fraser enjoys Koonsian economics. Tino Sehgal finds Rabbit (1986) to be an iconic work, the curator continued, and Kara Walker responds to the advertisements for art magazines from 1988–89.1 For this panel, Rothkopf invited four American artists to discuss what Koons’s work means to them and how it has affected contemporary art.

A striking feature of the individual panelists was generational: Jordan Wolfson (b. 1980) was bold and unhinged in a way that was rebellious and irreverent but also smart. Laura Owens (b. 1970) and Carol Bove (b. 1971) were approaching the cusp of Zenlike wisdom attained by the senior artist Stephen Prina (b. 1954), though with a noticeable distinction: Bove was accepting and positive of ideas contained in the work of Jeff Koons, (b. 1955), but Owens still resisted those qualities of which she does not approve. Such polarization is emblematic of many opinions of the artist.

In a brief presentation, Bove discussed her interest in the sublime and banal, as well as love and democracy. Her fascination with Koons is paradoxical, proposing that our admiration for him is not unlike how the Democrats elected Ronald Reagan as United States president twice. The art world, Bove said, has a taboo regarding mysticism, ignoring or suppressing “direct communication with the godhead.” Art brings powerful experiences in which you lose yourself, she explained, breaking with administrative consciousness. Like many, Bove came to art as a romantic but became a politician who is on high alert for what she called cheesiness, which differs from tackiness, because the concept behind the latter term is cute and forgivable. For her, Koons uses a “high production value to deliver an ecstatic message,” which a thinking art viewer would feel compelled to resist. Bove wondered if hostility to this message—delivered like a Trojan horse—demonstrates a prejudice against new-age spiritualism and even feminism. The art world has turned from poetry to theory, Bove declared, and “the taboo is self-protecting.” 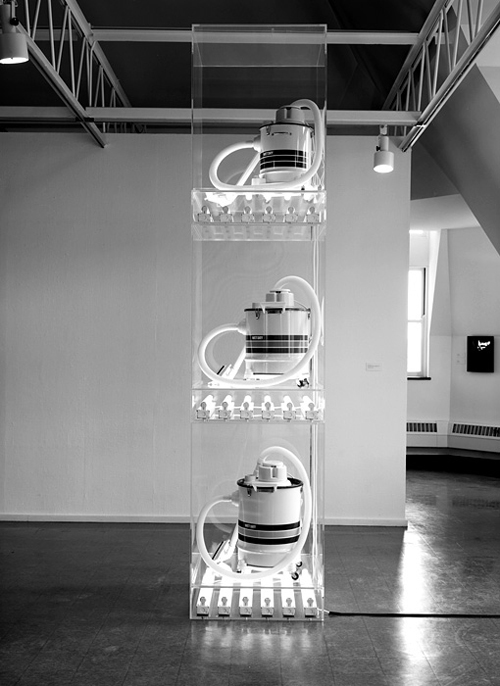 Prina ruminated on his early experiences with the artist: “Things were wide open when I first saw Koons’s work.” Prina’s first encounter was a 1982 group exhibition called A Fatal Attraction: Art and the Media at the Renaissance Society in Chicago, which included Koons’s New Sheldon Wet/Dry Tripledecker (1982), one of the few objects in a gallery full of painting and photography, Prina noted. A year later he came across more work by Koons in a group show, LA–NY Exchange, at Los Angeles Contemporary Exhibitions (LACE), and a few years after that confronted the Luxury and Degradation series at Daniel Weinberg Gallery in Los Angeles. Prina said he received the same “wow” sensation that he had experienced in a 1976 exhibition of contemporary European artists at the Art Institute of Chicago, when he stumbled upon an installation by Marcel Broodthaers.2 Koons’s infamous Banality show at New York’s Sonnabend Gallery in 1988, Prina recalled, took place a relatively small space, perhaps dangerously so with all the fragile porcelain sculpture. Prina’s main thought after leaving the gallery was: “Does Koons hold his audience in contempt?”

With time already running behind, Rothkopf jumped to the open conversation among the panelists, but Wolfson hijacked the talk’s direction, reading from notes on his smartphone that he took earlier that week, when visiting the Whitney exhibition. (If Owens had been allowed to speak, I would have received a better feel for her point of view. During the open conversation she came off as a curmudgeon, but certainly her ideas have more depth than her reactions tonight.) Wolfson’s observations centered on distortion, scale, material, and image. One particularly interesting note was: “The work has humor in play but is never actually funny.” Regarding Koons’s Hanging Heart (Violet/Gold) (1994–2006), Wolfson wrote: “Seeing oneself not from reflection but from inner mind—this is very advanced art.” Neverthess, he observed that the piece is cold and dead.

The open conversation moved rapidly, quickly jumping from topic to topic. Rothkopf compared Koons’s work to Lladró figurines from Spain, a reference he admitted that people younger than fifty probably don’t understand. (It was hilarious to me.) Owens and Bove discussed the latter artist’s Trojan-horse idea, in which a Koons sculpture embodies a particular message, usually that of acceptance, with which Koons distracts you. Bove argued that the allure of the object that holds your attention while something else slips into your mind. For Owens, the production is compelling and full of attention—it is not a distraction. Wolfson refined an idea about two major tenants of Koons’s work—image and material—for which one typically dominates the other within a single piece. Bove characterized a similar notion of images versus picture/graphic. Regarding a work’s message, Wolfson recognized that, through the art, Koons accepts the universe’s indifference. 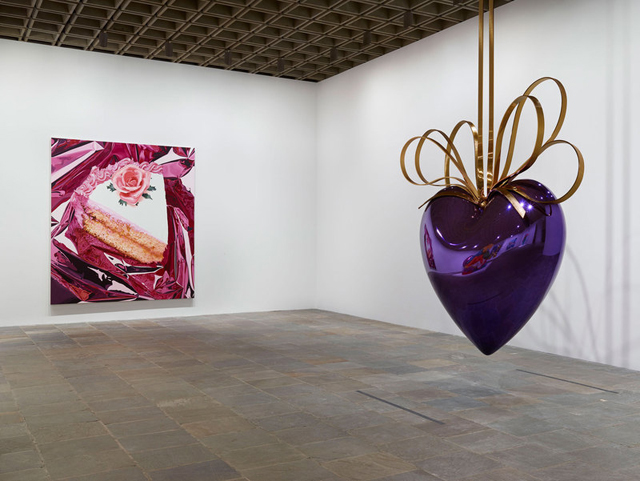 Prina had been indifferent to reproductions of several works, such as Cat on a Clothesline (Aqua) (1994–2001), but was impressed by them in person. For some artists, he explained, seeing the rear of the work isn’t necessary, but for Koons all sides of a work are important. I noticed this most strikingly with Rothkopf’s installation of the Banality sculptures at the Whitney, which had ample room in front of and behind the works. Returning to a Bove observation, Prina found it interesting that she chose the terms “cheesy” and “tacky” over “kitsch,” which is how many describe Koons’s appropriation of tchotchkes.

“We’re all in it,” Owens exclaimed, irritated by the pervasive conversation about Koons and money (such as his high auction prices), which many critics and writers bring up. Koons is a person who has to maintain a certain lifestyle level, Wolfson responded, suggesting that we perceive him as a fallen angel. Otherwise, he continued, one gets preoccupied with formal problems, which he said nearly every artist deals with. “Art goes away,” Wolfson proclaimed, “What stays is intention.” The trouble with Koons’s stated intentions, his never-ending mantra of acceptance, perfection, and the like (as he expressed in his lecture at the New School one day earlier), allows for any interpretative framework of judgment of his work—whether praise or condemnation—is acceptable. In a brilliant move, Koons leaves the ball in the viewer’s court, trusting him or her to offer meaning, and whatever you think of his art reflects who you are and what you think—not who Koons is or what he thinks. If the artist or his work angers a person for whatever reason, it’s on that person, not the artist. Koons accepts all viewers no matter what, like a benevolent Heavenly Father, and this is how he deflects criticism so well—repelling instead of absorbing it and having it shape him.

Koons is “the artist we deserve” Owens stated. He is also the poster boy for 1980s art—for Reaganomics, the AIDS crisis, and so on—but, as the panelists agreed, he’s also an emblematic artist for every decade since. And Koons’s production continues on and on. Owens said it’s not enough: “We ask the artist, ‘Can we have more?’” Bove agreed: “It’s gone a little hyper mega.” Wolfson claimed that Koons’s work is passive, hinting that it’s us who get riled up over it, for whatever reason. But the work also collapses, has no clarity, and loses agency. “The structure takes over,” Wolfson said, but I’m not sure what he was getting at. 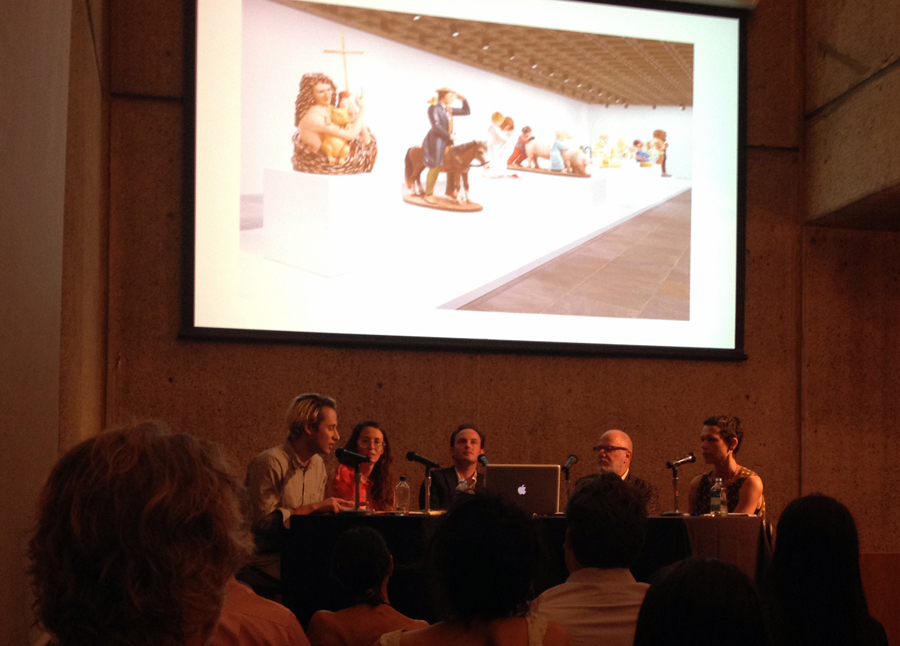 During the audience Q&A, the art dealer Jeffrey Deitch observed that the panel didn’t address the issue of celebrity. Koons was well regarded by other artists from the beginning of his career through the early 1990s, Deitch said, but after the artist’s personal and professional involvement with Ilona Staller, a Hungarian-born Italian politician and pornographic actress known as Cicciolina, his peers turned against him.

Similarly, Rothkopf wondered if Koons has any followers—an odd thought considering the panel’s published aim was to bring together “four artists whose work has variously engaged questions of production, value, affect, taste, and display….” I would argue that many artists share Koons’s various approaches, such as serial production, found objects, and a fascination with mass culture, including Haim Steinbach (b. 1944), whom the panelists briefly discussed. Koons might be exemplary of a certain standard of perfection in his process—it’s often said that his expectations for his sculpture exceed that for aerospace industries and the military—but he is far from being a singular voice his approach to art.

Nevertheless, Owens gets nothing from the show and is even sickened by it; she moaned that Koons makes her hate to be an artist. I wanted to shout, “He’s not the only artist out there, Laura!” In response to a question about irony and sincerity, Rothkopf responded by asking if it’s a better moral position if Koons is ironic instead of sincere, hinting that it isn’t, that the latter position is more nefarious.

1 As a side note, Andrea Fraser and Jeff Koons exhibited together in a group exhibition Damaged Goods: Desire and the Economy of the Object, held at the New Museum of Contemporary Art in New York in 1986.

2 I could not identify and confirm this exhibition from the Art Institute of Chicago’s online history.

The Whitney Museum of American Art has published a video of the panel.