The Air That I Breathe

This essay is the fourth of four that reviews “The Koons Effect,” a recent symposium at the Whitney Museum of American Art and the Institute of Fine Arts, New York University. Read the first, second, and third texts. 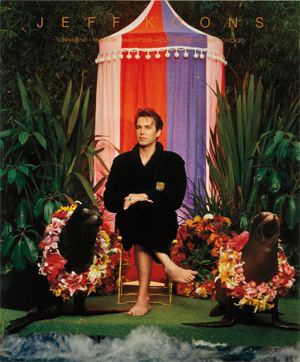 Concluding the two-day symposium on the work of Jeff Koons was a keynote address by the art historian Thomas Crow, Rosalie Solow Professor of Modern Art at the Institute of Fine Arts at New York University. By choosing a single decade—Crow’s talk was titled “Jeff Koons in the 1980s: Pop Culture Turns Up Late”—the scholar conveniently avoided discussing the artist’s work since the early 1990s, typically considered the divisive break between those who respect and loathe the artist, in particular when Koons exhibited his Made in Heaven series (1989–91). Indeed, in a review of the Whitney Museum of American Art’s exhibition Jeff Koons: A Retrospective, one critic wrote, “Watching Koons between 1985 and 1992 was like being on a roller coaster, beholding the readymade crossed with greed, money, creepy beauty, and the ugliness of our culture.”1 Even the exhibition’s curator, Scott Rothkopf, skirted the later work in his catalogue essay “No Limits,” which analyzes Koons’s work up to Made in Heaven before defending the artist against the art market for the last half.2

Crow’s delivery was slow, calm, assured, and never overbearing; his modest confidence was almost fatherly. He began his talk by discussing three artworks typically understood as “distant from Koons” but with “corresponding and congruent” ideas. Hans Haacke’s Condensation Cube (1963–65), a sculpture comprising water inside a Plexiglas cube that responds to an exhibition’s environment, becoming “a living organism that reacts in a flexible manner to its surroundings.” Condensation Cube, Crow noted, can exist in the three chemical phases of matter—solid, liquid, and gas—depending on its physical conditions. Crow returned to the notion of phases, and to elements such as air and water, and also to conceptual, representational, and literal phases of imagery, several times during his talk.

The second predecessor work was Andy Warhol and Billy Klüver’s Silver Clouds (1966), consisting of helium- and oxygen-filled balloons made from Mylar film, “a still very novel DuPont product,” Crow said, that was used by NASA for the first communication satellite, Echo 1, launched in 1960. The third work was unfinished: Gordon Matta-Clark’s made drawings for an airborne structure of his own; he even corresponded with the American businessman Gilmore Schjeldahl, the inventor of Mylar film and the creator of Echo 1, circa 1977, during his research. Matta-Clark’s project was concurrent with Koons’s earliest works, The Inflatables (1978–79). “These two projects,” Crow said, “while coincidental in time, manifest vastly different scales of endeavor and intended effects on their audiences.” Unlike Matta-Clark, Koons avoided engineering problems by purchasing his materials—mirrored squares and plastic toys—off the shelf.

Moving to Koons’s series The New (ca. 1980–83), for which Koons entombed out-of-the-box vacuum cleaners in upright Plexiglas coffins, Crow asked, “Why choose vacuums in the first place?” While many would offer “commodity fetishism” as an answer, he argued that these machines signify “tiresome, disagreeable, and never-ending work.” With a design basically unchanged since World War II, Crow said, vacuum cleaners are simply not seductive. When the machine’s power is switched on and off, its bag inflates and deflates, just like a pair of lungs. “The mental enterprise of reconciling the fantasy of immortality—being forever new—with the fragility of actual life is not something that Jeff Koons invented,” he explained. “To the massive contrary, it comes close to a core definition of the whole symbolic dimension of human culture.” For Crow, Koons’s work is about mobility and stasis and the contradiction between the mortality of humanity and the idea of perfection that people over the centuries have attributed to gods and demigods. “Needing a tool,” Crow remarked, “doesn’t make you a commodity fetishist.”

Crow argued that Koons’s populist touch surfaced in the three distinct bodies of work in the Equilibrium series (1985), which included the cast bronzes of the inflatable lifeboat and snorkel, the floating basketballs in glass tanks, and the appropriated Nike posters. The bronze works are hollow—the air is trapped inside. The poster of Darrell Griffith (a.k.a. Dr. Dunkenstein) featured dry ice (a carbon dioxide that skips the liquid phase) rising from bisected basketballs, and the poster of Moses Malone boasted a dry seabed. Crow noted the racial tension inherent/embedded in professional basketball, in which white fans deify the unfathomably natural talent of black players. These revelations arrived relatively late in the artist’s career, the scholar said, but he seized them. The posters in particular, Crow stated, “must have confirmed the artist even more deeply in his sense of the rightness of his sculptural intuitions.” 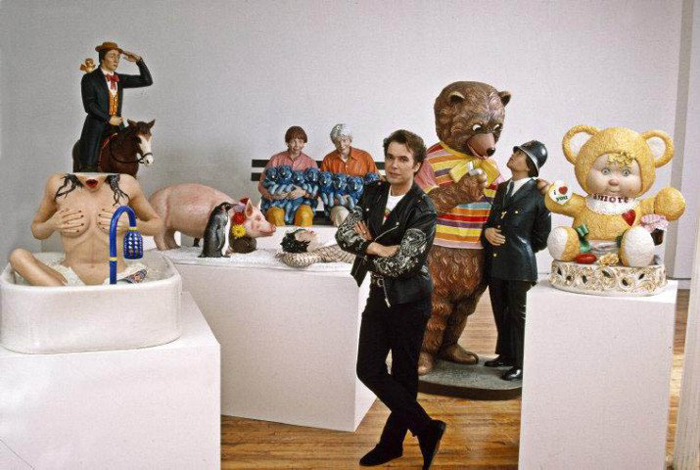 Crow briefly discussed works from the Luxury and Degradation series (1986), which showcased “anonymous drinking artifacts” used in “suburban Bacchic rites,” and from Banality (1988), for which vernacular and religious images were enlarged to ridiculous proportions using the means of Old World craft. Entering the 1990s, the critical tide, which had been on Koons’s side until then, turned against him. It was acceptable, art historically speaking, for Koons to employ bronze casting and fabricate Minimalesque cases Koons used for The New and Equilibrium. But, it seems, the pornography of Made in Heaven was rejected. In 1994, Koons turned to air and matter again in the Celebration series (1994–2014), whose works featured thin, liquid membranes such as balloons. Unlike a heat-sealed plastic rabbit, a balloon is expansive, and its surface becomes thinner when blown with more air

From the audience, the artist Josiah McElheny asked Crow how today’s Koons squares against 1980s Koons. During a Flash Art panel in 1986, Crow replied, Koons was a twentysomething artist who wanted to be taken seriously at the time.3 Is that just as much an act, McElheny wanted to know, as the self-help affirmation guy that Koons has become? During the symposium, McElheny noted, panelists perceived the fun in Koons’s act as a portal into dark, uncomfortable places—and, like many other thinkers, one should not take Koons’s words at face value. “He’s speaking through his art in a way that’s quite transparent,” argued Crow, “and that goes against the grain of the things he generally says.” Topics such as the quest, danger, and allegory, as well as supernatural personification, were historically the domain of fine art, Crow said, but have since been suppressed in modern times. Now we find these ideas in astrology columns and young-adult fiction. Echoing the artist Carol Bove’s position from last night’s panel, Crow wondered aloud, “Where myth has gone to live now that we don’t feel we believe in this anymore?”

Another audience member asked, “Where is Mike Kelley in this?” After a moment of flabbergast at the momentous nature of the question, Crow responded, “Kelley is honest. He’s always honest.” Kelley and his admirers, the scholar continued, share an intellectual ambition and an educational influence, as well as a desire for mythic, emotional expressions but not in a high-minded way. According to Crow, Kelley “had to debase to get to affirmation.” The artist Stephen Prina recalled that Kelley worried about the psychoanalytical aspect of stuffed animals: because people understood these objects to reference the artist’s own past, Kelley became scientific and conceptual about their display, putting them on tables like specimens. Prina concluded the digression: “I’ve only become worried about infantilism as an adult.”