This is the first of a pair of panels that well illustrate the dramatic change in attitudes toward “women’s art” that settled in during the next two years. The second event was in a grand institutional setting, and everyone felt as triumphant as, on this June night, they felt frustrated.1 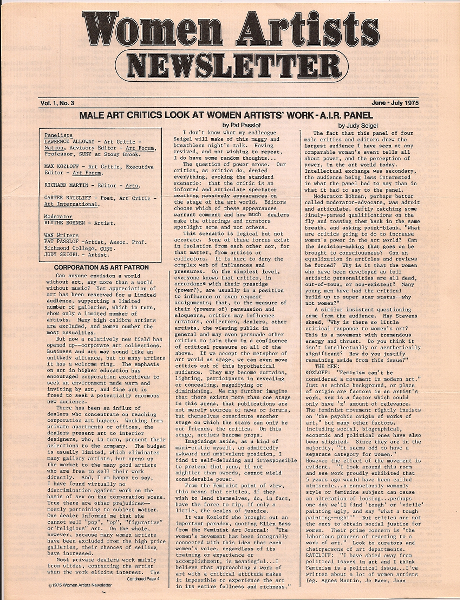 The fact that this panel of four male critics and editors drew the largest audience I have seen at any comparable woman’s event tells all about power and the perception of power in the art world today. Intellectual exchange was secondary, the audience being less interested in what the panel had to say than in what it had to say to the panel.

Moderator Blythe Bohnen, perhaps better called moderator-advocate, was adroit and articulate, deftly catching some finely parsed qualifications on the fly and tossing them back in the same breath, asking point-blank, “What are critics going to do to increase women’s power in the art world? Can the decision-making that goes on be brought to consciousness? Can an equalization in articles and reviews be forced? Why is it that the women who have been developed as full artistic personalities are all dead, out of town, or nonexistent? Many young men have had the critical build-up to super-star status: why not women?”

A similar insistent questioning came from the audience. May Stevens asked, “Why is there so little critical response to women’s art? This is a movement with tremendous energy and thrust. Do you think it isn’t intellectually or aesthetically significant? How do you justify remaining aside from this issue?” 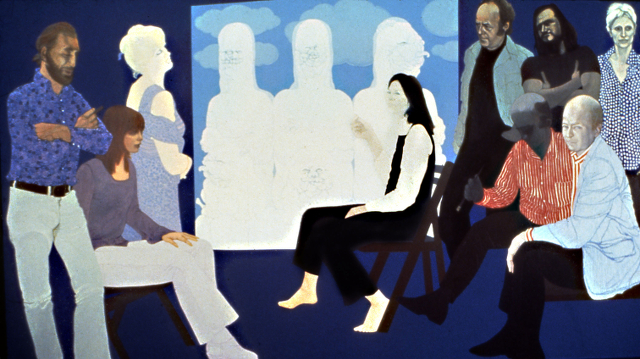 May Stevens, The Artist’s Studio (After Courbet), 1974, acrylic on canvas (artwork © May Stevens)

Max Kozloff replied, “Feminism can’t be considered a movement in modern art.” Just as ethnic background or place of origin are factors in an artist’s work, sex is a factor which could only have “x” amount of relevance, he said. The feminist movement rightly insists on “the psychic origin of works of art,” but many other factors, including social, biographical, economic, and political ones, have also been slighted. Since they are in the majority, “it seems odd to have a separate category for women.” However, the effect of the movement is evident. “I look around this room and see work proudly exhibited that five years ago would have been called miniscule.” Moreover, “a consciously womanly style or feminine subject can cause an alteration of looking.”

Perhaps one day, Kozloff suggested, “we’ll find ‘tough’ or ‘virile’ painting ugly, and say ‘what a tough painting—ugh!’’’ But, as he sees the issues, critics are not the ones to obtain “social justice” for women. Critics’ prime concern is “the laborious process of reacting to a work of art.” Look to curators and chairpersons of art departments for justice, he said.

Carter Ratcliff: “I have shied away from political issues in art and I think feminism is a political issue…. I’ve written about a lot of women artists (e.g., Agnes Martin, Jo Baer, Joan Mitchell) but they were artists before the feminist movement. If women come along with a theory of what significance in women’s art is, it will be in order to get accepted, to get prestige. So far the definitions don’t stand up, but they may gain support and become self-fulfilling prophecies. The problem is to find a good self-fulfilling prophecy for those women who feel that their self-interest or self-fulfillment lies as members of a group…. Specifically feminist conventions may be building, but that would ‘conventionalize’ women’s art, as in art ‘conventions.’” 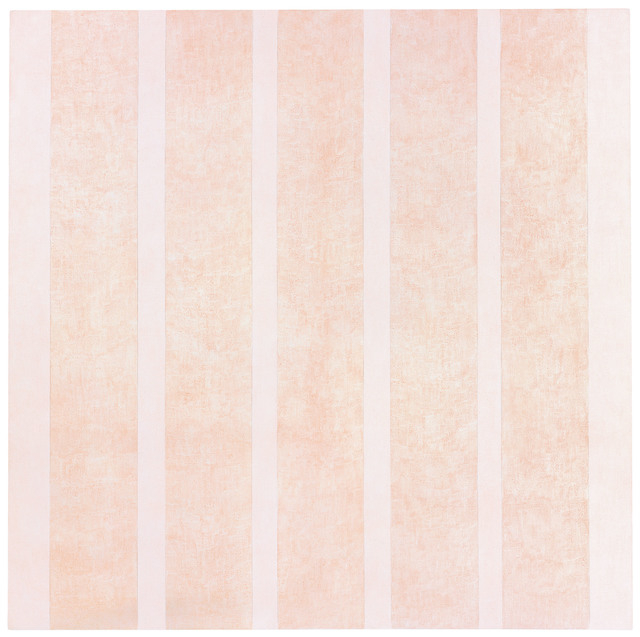 Those critics who repudiate the old Greenbergian criticism would be more interested in women’s work, which is outside the power structure, than formalist critics, as Ratcliff saw it. “The sensibility that makes one suspect that whole ‘certification’ process would respond to feminist consciousness, which also unhooks one from the power structure. [B]ut I can’t think of any woman who presents herself as a woman artist who presents work that would seem to be of quality to a hardline formalist critic.”

Richard Martin: “Being a Quaker, I was aware of the women’s movement before I was aware of art criticism.” The feminist movement was instrumental in breaking down the stereotype of the personal in art as “trivial.” However, “I would consider it a mistake to orient the magazine Arts toward one particular point of view. The priorities are to act as medium of record and to discriminate between various forms of art.” It isn’t possible to take a self-conscious equalizing attitude toward women, but “an ardent antifeminist would not be engaged to do reviews.” As Martin sees it, when women are properly represented with exhibitions, “recognition in other areas will follow.”

Lawrence Alloway: “I hesitate to formulate general factors common to women’s art, perhaps a theory may come later. There are proposals for a feminist aesthetic, something inherently feminine. That used to be considered sexist—now the women are saying it!” Alloway pointed out that none of the proposed criteria applies to more than a few small groups, but what matters is what’s intended.

For instance, “Judy Chicago’s painting reminds me of Billy Al Bengston first, and female genitalia second, but there can be specific feminist iconographies if women artists say they are.” In other words, “the circle has been sexualized or politicized, but these things don’t add up to an inherent sensibility.” Of course, “I think of women’s art in sociocultural terms, but I think of everyone’s art in sociocultural terms.” As for power, Alloway said, “I don’t think the writer is so insignificant. Not only does he have the power to write, but the power to withhold. I’m writing four pieces about women now. I’m preoccupied. If I had a brilliant idea about Brice Marden or Richard Serra, I wouldn’t write it.” And, on changing the system: “I’d like to see an expansion of co-ops.”

Lucy Lippard’s question-statement from the floor addressed the paradox which haunts these discussions: “Women’s art is used as a synonym for feminist art, but they’re not the same thing…. Can you tell the difference?”

Obviously, there’s enormous pressure to make “women’s art” into an aesthetic as well as a political development, and the more useful “women’s art” is as a political configuration, the more likely it is to become an aesthetic one. Some women would benefit enormously, but the rest would be worse off than before, having undertaken the struggle in the first place to escape stereotyping.

1 A panel called “Contemporary Women: Consciousness and Content,” took place at the Brooklyn Museum on October 23, 1977.

Written by Judy Seigel, “Male Critics Grilled and Toasted” was originally published in Women Artists Newsletter 1, no. 3 (June/July 1975): 1–2; and reprinted in Judy Seigel, ed., Mutiny and the Mainstream: Talk That Changed Art, 1975–1990 (New York: Midmarch Arts Press, 1992), 16–17. In Terms Of thanks Midmarch Arts Press for permission to republish this review.