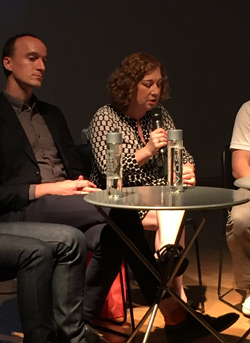 Two years ago I stopped attending panels of art critics discussing the state of the field, mainly because the subjects such events would cover could easily be predicted: (1) money, and how there is little to be made writing about art; (2) a perceived loss of power in the art world, ceded to dealers, curators, and collectors; and (3) the differences between writing for print and online publications. Speakers overwhelmingly wrung their hands over problems that have existed for decades. The numbing repetition—I can’t even.

I almost skipped this “Talk with the Critics” panel, part of a series moderated by the artist Sharon Louden on professional-development issues for MFA students, for fear of more of the same.1 But I was familiar with and respect the work of the four New York–based participants—Ben Davis, national art critic for Artnet News; Carol Kino, a journalist for the New York Times and other mainstream newspapers and magazines; Andrew Russeth, co–executive editor of ARTnews; and Benjamin Sutton, metro editor at Hyperallergic—and decided to give it a shot.2 The level of discourse was reasonable and pedestrian. That’s not surprising, considering Louden’s focus for the series is to demystify the work and approachability of critics for the academy’s graduate students. What follows are summaries of the major topics.

In college Russeth attempted to make art, unsuccessfully, so he studied art history. After studying with Rosalind Krauss, who “was a force of nature … [who] really made the stakes seem very high,” Russeth became attracted to what he perceived as the glamor of art criticism, deferring a halfhearted interest in law school. Sutton covered film, theater, and art for his school paper, and Kino came from a similar background—wanting to write about culture. Falling in with an art crowd in New York, she discovered she had a good eye. Davis, who studied cultural theory and philosophy in school, was introduced to the art world via Rachel K. Ward’s ill-fated group exhibition Terminal 5 at John F. Kennedy Airport, where he met the artist and writer Walter Robinson, who invited Davis to work for Artnet Magazine, which he edited. Artforum had deceived Davis into thinking that art was a place for ideas: “The art world is where important ideas go to die,” he joked. 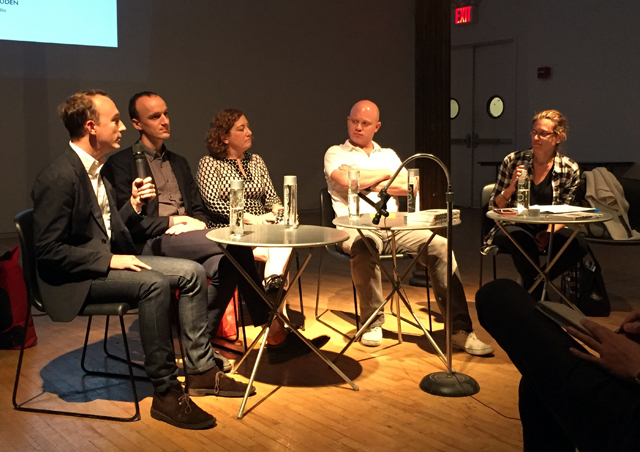 Andrew Russeth on the left (photograph by Christopher Howard)

What Do You Look For?

For Sutton, the lure to write about the big show was stronger when he was younger; now he finds it more rewarding, for example, to travel to out-of-the-way places and spend more time with fewer shows. Russeth aims to reset the balances where critical consensus is skewed or wrong, and also “to get people’s eyeballs on something new.” As a journalist, Kino looks for a good story, often on current events with “some meaty sociopolitical aspect.” “I look for a sense of contemporaneity,” Davis said, which he sometimes finds in older art, which can become relevant again.

How Do You Find New Things?

Louden tried to get a conversation going about Instagram, but the four critics had other ideas. “People drop casual comments at dinner parties,” Kino said; she also depends on friends who are artists and publicists. “The artists always know,” Russeth affirmed, identifying younger, plugged-in dealers and even collectors as those offering good recommendations. Davis rephrased the question to uncover the panel’s not-so-hidden motive: “How do you get written about?” Instead of boilerplate invitations, Davis said, write something personal, like “You may like my work for this reason.” Kino advised artists to time their pitches right for a publication—which may publish a review while an exhibition is still on view, or months later. She hesitates to carrying on correspondence with artists who don’t have galleries, or whose work isn’t appropriate for galleries, because her outlets are not interested in covering unusual situations. Sutton, who wades through press materials daily, recommended that prospective artists contact him by email, not phone or Facebook. Rather than brownnose with critics, Russeth said, he advocated artists to “start a gang,” reiterating an idea from Dave Hickey. “The best way to do it is to have a big group … have curator friends, have artist friends, have writer friends,” all of who can promote your work to others.3

Can Critics and Artists Be Friends?

Russeth has no problem with it, though unfavorable writing can lead to disappointment. Sutton finds it inevitable that artists and critics form relationships and views the separation between them to be old fashioned. Kino reminded us that an even older school—dating to the 1950s—fraternized comfortably. Davis cautioned against losing the balance between insight and embeddedness; he also recognized that “an honest review” in intimate art scenes outside New York “would mean severing all these relationships.” And then: “I don’t have a hard and fast rule except to be honest about it, if you’re writing about someone who you have knowledge of.” Regarding Robert Morris’s personal relationship with Krauss, Davis said, “A lot of art history formed by people who knew each other very intimately. You’d be foolish to overlook that as a source.”

What’s Up with Listicles?

Louden identified lists, such as “6 of Our Favorite Hamburger-Themed Artworks for National Burger Day” and “14 Young Power Players Set to Become the New Art World Aristocracy,” as a recent trend in art writing. The format, Davis claimed, is cheap to produce and does well—much better than reviews of small shows in Bushwick. The BuzzFeedification of discourse has spawned the entertainment article about art, he said, adding that it’s new to have an audience “amused by art.” While ARTnews publishes intelligent lists, Russeth revealed that the well-researched article gets an audience over time. Sutton argued that a well-written listicle can be informative.

What Are the Issues in Painting?

The audience Q&A started with an inquiry about contemporary painting. Russeth singled out a couple of schools in play—the networked painting of R. H. Quaytman and postinternet art—and told us he has to argue for painting’s relevance when writing about the medium. (Really, still?)  Sutton seeks what looks new or demonstrates a variation, break, or improvement in any medium, and Kino digs for personal stories and avoids theoretical discussion.

From the crowd, the art historian and critic Irving Sandler—who began writing in the 1950s and was friends with many Abstract Expressionists—pressed the issue further. Davis ducked the question to ask his own: “What is art?” Kino placed the burden on artists, while Sutton stressed the need to pay attention to art scenes outside New York, Los Angeles, and Chicago. Online publications such as Burnaway and Pelican Bomb do that well, he said. (Louden added Bmore Art.) Russeth argued that criticism can be a tool to counteract obscene amounts of money circulating in the art world, and also to upend male white dominance.

What Do You Love and Hate in Writing?

Sutton likes writing about art that he doesn’t get initially, that gives him a new perspective. Kino hates an opinionated reviewer’s personality coming through strongly. “I like original ideas, plainly stated—that’s pretty boring,” Davis said, noting that his monthly roundup of art writing for Artnet News demonstrates his interests—though I notice that he recently sought recommendations for the list on social media. Russeth loves criticism that lays it on the line—he wants opinion, writers coming out swinging and being risk takers. “That’s what leads to better art,” he declared. 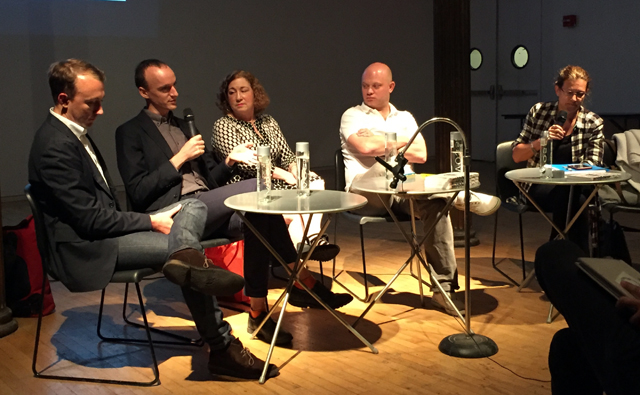 Benjamin Sutton on the mic (photograph by Christopher Howard)

What about Trends and Brands?

Figurative art has roared back over the past ten to fifteen years, Russeth pronounced, partly because critics and historians have broadened their view. “People like Joan Semmel, Martin Wong, Philip Pearlstein—I mean, they’ve never looked better, right?” He explained, “It’s no longer necessarily a zero sum game, which when I read art history, it kind of feels like it once was.” For Davis, “contemporary” has eclipsed terms like postmodern or pluralism, an issue he explored in his 2013 book 9.5 Theses on Art and Class. When teaching painters, video makers, and performance artists, he observed, “The question, implicitly, that’s there, without being proposed, is, what are we all learning that’s the same?” Instead of having a unifying theory of it all, Davis detects a herd mentality in galleries, where “consensus about what was competent” has replaced “consensus about what was good and bad.”

Sutton has witnessed an acceleration of branding in culture, when fashion crosses over into the hip, cool art world. The fast-fashion retailer H&M, he said, collaborated with Jeff Koons last year to produce a handbag. (Don’t forget about Takashi Murakami’s popular monogram bags for Louis Vuitton.) Taking a long view, Davis connected the early-nineteenth-century Romantic view of the artist with the Industrial Revolution. By the late 1990s, he sketched out, the fashion industry had evolved from producing couture for the few to cranking out ready-to-wear clothes for the masses, with designers producing sunglasses, cosmetics, and perfume. Huge conglomerates now use art to recapture high fashion’s exclusivity. “The whole point is that there’s a tension” between art and fashion, Davis concluded, not a synthesis.

What’s Your Definition of Art?

Russeth said that art, at its best, is a protected field to talk about things you can’t talk about elsewhere, in a safer and fuller way. He left out “through objects and images.” Sutton agreed but emphasized that art is not protected because it is permissive. Davis noted that art is a general term for excellence—an advertisement can be so good that it is art—so what is fine art? The tradition, the museum and gallery culture, and economically (a person with control over his or her labor). Earlier Kino had passed the microphone to Davis but got it back, saying “You know it when you see it.” She added that art constantly redefines what is art.

1 I spoke on a “Talk with the Critics” panel with Hrag Vartanian and Lily Wei in November 2013.

3 Russeth misattributed the quote, slightly. Here is Hickey: “That’s why I still endorse Peter Schjeldahl’s advice on how to become an artist: ‘You move to a city. You hang out in bars. You form a gang, turn it into a scene, and turn that into a movement.’” What Russeth left out was the final step: “Then, I would suggest, when your movement hits the museum, abandon it.” Hickey, “Romancing the Looky-Loos,” Air Guitar: Essays on Art and Democracy (Los Angeles: Art Issues Press, 1997), 152.