The Serbian sculptor Marko Marković has expressed an interest in museum conservation departments and in the process of finding, restoring, and preparing objects for exhibition. For him, the final display is as much the work of archeologists and conservators as it is the labor of artists, artisans, and curators. In addition, Marković is not a fan of the normal exhibition catalogue for an artist, with an art historian or curator explaining the art. He would rather provide a fictional document for audiences to follow, to create something believable beyond the contemporary artist’s professional requirements to present work in galleries, to create a portfolio website, and to give talks. 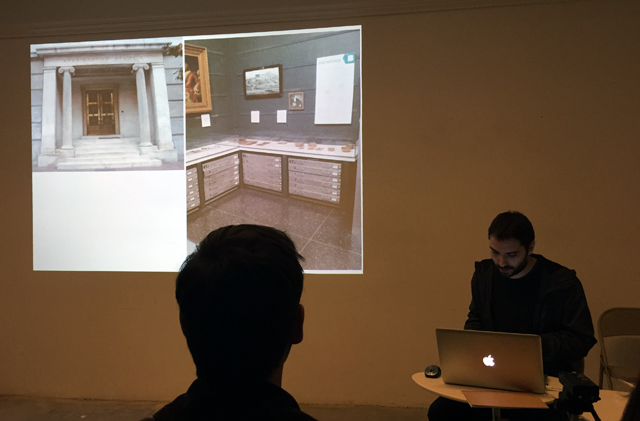 During a lecture at Residency Unlimited, Marković read a written paper while projecting images behind him. His tale started with Jeffrey Horowitz, a University of Oregon professor, who in 1985 made an accidental discovery during an excavation at the Acropolis in Athens, Greece. Horowitz—who may or may not be a real person—found documentation for an unfinished architectural work or broken pieces of an artwork—it’s hard to take in everything. The folder also contained a ninth-century Asian book of geometry and conflicting inventories (from 1864 and 1878) of an archaeological dig in which the Kritios Boy, also known as Acropolis 698, was discovered. Side by side Marković showed two vintage-looking photographs of identical piles of sculpture, except that one included the Kritios Boy among the rubble, and the other omitted the statue. Unless you are a scholar of archaic Greek art, it was impossible to know which image was digitally altered.

Continuing the tale, Marković highlighted a second, more recent archaeological discovery, in 2013 in Ebla, Syria, by scholars at the University of Sapienza. A clay sculpture of a nude torso was unearthed, conserved, scanned three dimensionally, cast in plaster, and exhibited a year later. Through Greek in origin, Marković said, the work had a different stylistic appearance: hard edges instead of smooth curves. This second find was actually Marković’s own sculpture. His elaborate backstory—with real and invented facts and using found and Photoshopped images from the nineteenth century, the 1980s, and today—creates a specific way to view the work. In a later conversation, he told me that, unlike other acts of parafiction in art, his discrete sculptural creation is the primary focus, not the narrative that accompanies it. 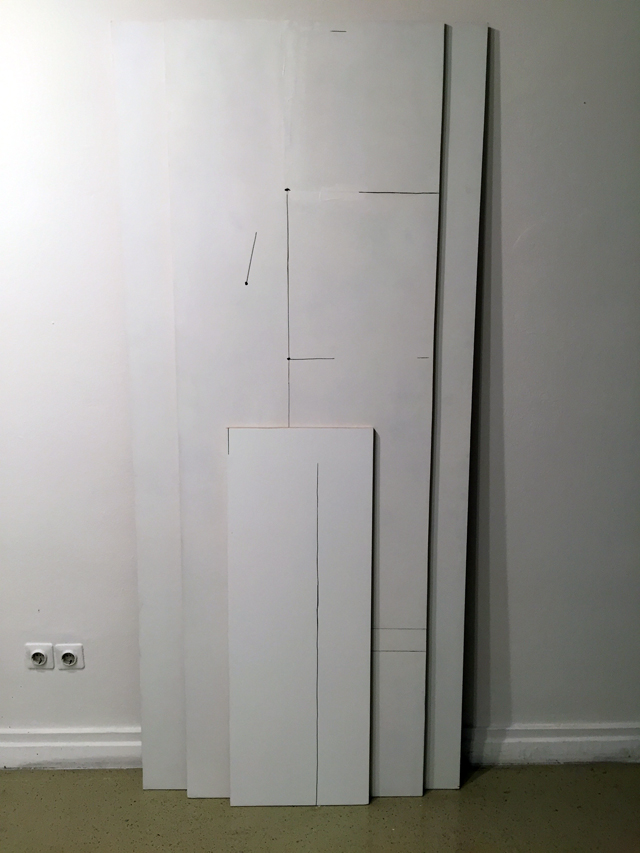 Marković’s talk was followed by a presentation by the Croatian painter Dino Zrnec, who articulated his primary interests: the conditions of display and experimental processes. Zrnec showed documents of recent exhibitions at Kunsthaus Graz in Austria and Galerija Galženica in Velika Gorica, Croatia. For the latter, he transported rectangular sections of drywall—one had white acrylic paint on it, and another had white oil paint—from his studio and leaned them on the wall. He also removed a square piece of ceiling board and stretched a canvas over it, again leaning it. These material explorations remind me of what Robert Ryman and Gedi Sebony have been doing in New York. Zrnec took a similar approach in Graz. The exhibition’s curator, Katia Huemer, wrote:

The interventions Zrnec employed in order to engage the existing structure were at once minimal and ruthless: the artist cut various shapes out of the wooden panels in the walls of the project space, stretched fabric over them, then inserted the cut-out shapes back into the incised hole. The front of the resulting canvas disappeared into the wall, leaving only a few visible hints that the “actual artwork” was hidden behind it.

While visiting museums in New York and Philadelphia, Zrnec paid attention to how art is displayed, noting how the raised platform on which Robert Rauschenberg’s Winter Pool (1959) rests in the Metropolitan Museum of Art adds a sixth step to a five-rung ladder that is part of the work. (He is not the only one to notice the plinth.) Such curatorial maneuvers could be considered a slight shift in authorship, and Zrnec said he is thinking of ways to cannibalize the work of another artist for his next exhibition. 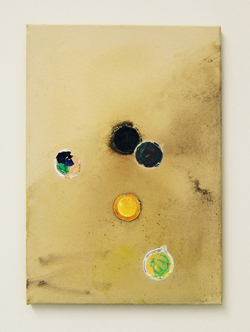 Zrnec recounted another exhibition, which took place in an abandoned post-office building in Croatia, where he showed several paintings that had created themselves—almost. He poured turpentine in plastic cups that held surplus paint, placed them on a canvas on the floor, and left the studio. Coming back the next morning, he set the finished painting upright. Here the act of creation takes place while the artist is somewhere else.

Both artists were on a two-month residency in New York after capturing the annual award for emerging artists in their home countries: Marković won the Dimitrije Bašičević Mangelos Award in July, and Zrnec received the Radoslav Putar Award in June. Eriola Pira, program director of the Young Visual Artists Awards, which administers the awards from the United States, joined the two for a conversation.1 She asked about the award’s meaning, but neither artist made an effort to provide a sufficient answer. Zrnec felt it was important for artists under 35 to come to New York, and Marković expects a stay in the city to “raise the level of my practice.” These responses, along with the tenor of their individual presentations, attested to a tight-lipped, unforthcoming attitude. Were Zrnec and Marković elusiveness by personality or unsure of their English language skills? Were they holding their cards close? This was frustrating at times because their conceptually oriented work demands explication

Pira’s question about developing new artistic languages stalled. “I still think there are some possibilities within painting,” Zrnec replied. “That’s why I am practicing painting.” Marković declared that works are usually unfinished and not always bound by the exhibition. “Every project continues,” he said. “It takes time to develop” The geometric sculptural models he designs on the computer are not always built, but sometimes he draws these virtual objects on a wall or creates videos for projection. His answer made me wonder if he will deliver his Kritios Boy lecture again, with additions or changes to the story. 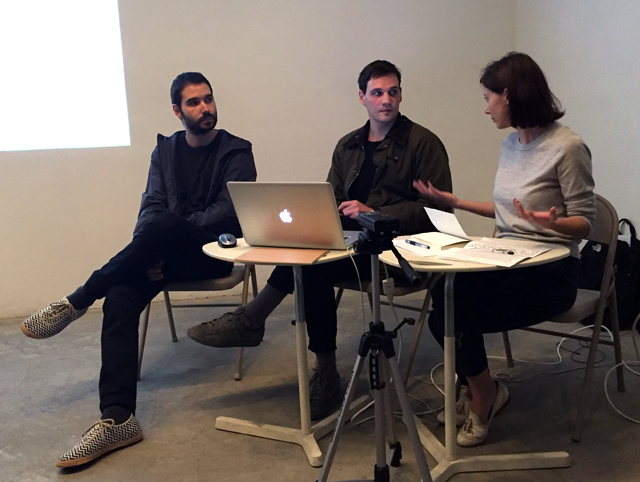 Both artists articulated a strong attachment to their chosen medium—painting and sculpture—and downplayed the significance of installation, even though the exhibition space plays a crucial role in their work. For Zrnec, the meaning of his work is cumulative as it moves from the studio to the gallery and beyond. “If I were to show [my paintings] in a new space, I would transform them,” Zrnec said, “and they would become something else.” Pira prodded him further: “Your work has been described as performative. Do you agree with that?” With the paintings made with plastic cups in mind, Zrnec replied, “It’s me but it’s not me.” He reiterated his interest in situational qualities: “I always try to experiment with these very technical processes, and to think of the conditions of the work.” He also relayed a story about the limitations of studio space: “I had this small room and I wanted to make a big painting. So I decided to cut really big canvases, but I would stretch them around smaller stretchers … fold them like a very random item, a t-shirt. And then I would paint them from all sides, in different monochromes.” A single canvas might be painted while on several different sized stretchers, achieving a provisional quality. Such a painting could potentially fit over a sofa, a love seat, or a La-Z-Boy, depending on your needs.

Marković was prompted to describe a recent exhibition with his twin brother, which focused on the Serbian architect Nikola Dobrović’s masterwork, the Ministry of Defense building, destroyed in a NATO air strike in 1999. The Markovićs had separate rooms: a project for the restoration of the building for his brother (an architect), and a room for the artist’s six-foot plaster cube made from a single modular unit in plaster, cast from an outside wall of the defense building. Marković stacked the pieces to form the work and in one corner broke a hole to allow viewing of the interior. “For an antimodernist,” Pira commented, “you rely a lot on the grid.” Marković reminded her that Rosalind Krauss’s essay “Grids” emphasized the ambivalence or irrationality of the grid.

Painting in commercial galleries in New York has not impressed Zrnec. There are not so many painters back home, he said, and art institutions have their own agendas. Though Conceptualism and performance are the dominant postwar trends in the former Yugoslavia, he feels an affinity for Croatian artists from forty years ago. “Most of the Conceptual artists had brushes in their hands at one point in the sixties [and] seventies,”

“Is the construction of a work the discover of it?” an audience member asked Marković toward the conversation’s close, adding, “You’re discovering what was already there.” While he didn’t quite answer affirmatively, a good way to interpret his work is as an archaeology of the future. And it’s promising that two artists are exploring strategies of presentation that are artistic in nature, not curatorial.

1 I served on the jury that selected Dino Zrnec as the winner of the Putar award in June 2015. I also conducted studio visits with both artists two days after this talk.