Residual Rights—Can the Concept Be Implemented?

This text is the second of three that reviews a series of panels on residual rights for visual artists, held in 1974. Read the first and third reports. 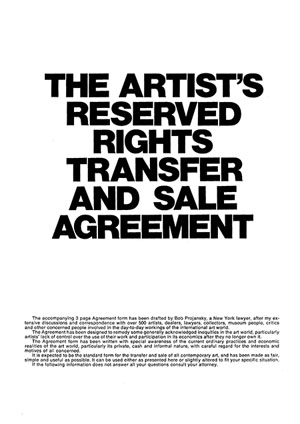 , coauthor of an artists’ rights bill under study by Congress, noted that the mafia is now buying art for profit and that his bill would discourage them. He also said it would deter thieves. (This reporter doesn’t see how a thief would be prevented from selling to a secret buyer who wants the work only for himself. Moreover, work could still be held for ransom, a common purpose of art theft.) Gorewitz said the law would work well because it would be administered by the Internal Revenue Service.

Herman Finkelstein cited ASCAP, which has been extremely effective in controlling royalties for composers. Gorewitz described a system of “follow-up” payments in Europe. Since the 1920s, France has had a droit de suite law, returning 3 percent on resale to the artist, whether prices go up or down. It apparently isn’t working too well, because the amount actually collected is very low compared to sales.

Robert Projansky, lawyer and author of the best-known transfer agreement, was invited up from the floor. He disagreed with panelists about government policing. Government intervention in the arts would be damaging, he said, while a voluntary transfer agreement would be effective if most artists used it.

Projansky pointed out that transfer agreements are used in real estate all the time, adding that artists could give up their royalty if they wished, keeping other provisions. He feels strongly that artists should maintain some control over their works after they are sold, even after their death. (The recent alteration of work in the David Smith estate by [his] executor Clement Greenberg makes a strong case for this point.)

Written by Donna Marxer, this review appeared in Artworkers News 4, no. 8 (November 1974); and was reprinted in Judy Seigel, ed., Mutiny and the Mainstream: Talk That Changed Art, 1975–1990 (New York: Midmarch Arts Press, 1992), 3. In Terms Of thanks Midmarch Arts Press for permission to republish this review.