Residual Rights for the Visual Artist—Are They Desirable?

This text is the first of three that reviews a series of panels on residual rights for visual artists, held in 1974. Read the second and third reports.

An array of worthies in and about the art world met at Loeb Student Center for three panels on the question of “rights” for the visual artist. The principal topic, the controversial 15 percent residual payment to the artist on resale of his or her work, is nothing new. However, last year’s historic Sotheby Parke Bernet auction dramatized the issue.

That was when a Rauschenberg painting, originally bought by collector Robert Scull for $900, was resold by him for $95,000 [actually $85,000]. Rauschenberg was enraged, publicly scrapped with Scull [legend has it fisticuffs were exchanged], and, with his accountant Rubin Gorewitz (“the artist’s accountant”), formed a foundation and went to Washington to lobby for an artists’ rights bill.

The public had been invited to hear the pros and cons discussed. According to a show of hands, the audience consisted of perhaps 85 percent artists; they came and went in large numbers during the marathon event. 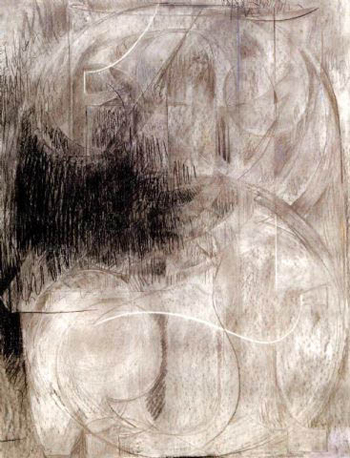 The panel got off to a late start because Robert Rauschenberg and Robert Scull were still out to dinner—together.

Then Lawrence Fleischman opened by objecting to the residual agreement, a not-unexpected position for a dealer. Artists would be more hurt than helped, he said; anyway, “90 percent of artworks go down in value.” Paula Cooper was in favor of the 15 percent, but pessimistic about implementation. She has one artist who uses the voluntary contract, but says she meets buyer opposition.

Jacob Landau thought the only artists to benefit would be the ones who have already benefited from the art boom, the elite few. Rauschenberg was succinct. He was in favor, “and I don’t want to argue about it.” Scull, charming and soft-spoken, had apparently had a change of heart. He now favors some sort of royalty for the artist and said he doesn’t believe it will slow the art market.

Landau felt it would. He sees a world depression coming [in] which little art will be sold. Rauschenberg countered, “No artist can afford that kind of pessimism.” As for size of the royalty, panelists either agreed on 15 percent or hedged, except Ron Gorchov, who insisted on 50 percent. “Fifteen percent is like a tip!”

Written by Donna Marxer, this review appeared in Artworkers News 4, no. 8 (November 1974); and was reprinted in Judy Seigel, ed., Mutiny and the Mainstream: Talk That Changed Art, 1975–1990 (New York: Midmarch Arts Press, 1992), 2–3. In Terms Of thanks Midmarch Arts Press for permission to republish this review.