Although artists have always made books, “artists’ books” suddenly evolved into a new form. The possibilities for conceptual, visual and psychological exploration drew artists from all media. Some were so taken with the new “voice” that they made books their sole medium. 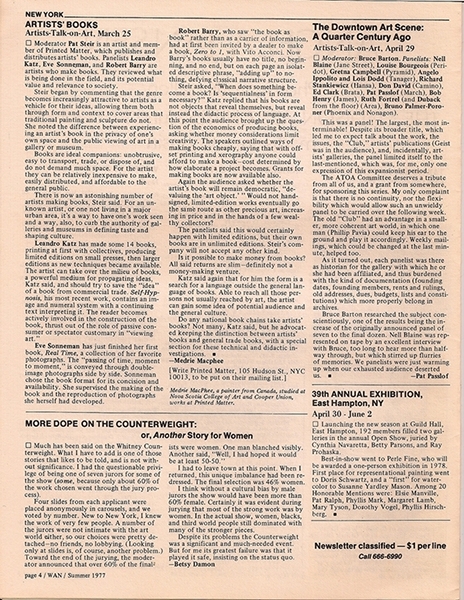 Moderator Pat Steir is an artist and member of Printed Matter, which publishes and distributes artists’ books. The panelists are all artists who make books. They reviewed what is being done in the field and its potential value and relevance.

Steir began by commenting that the genre has become increasingly attractive to artists as a vehicle, allowing them through both form and context to cover areas that traditional painting and sculpture do not. She noted the difference between experiencing an artist’s book in the privacy of one’s own space and public viewing in a gallery or museum.

Books are unobtrusive, easy to transport, trade, or dispose of, and do not demand much space, she said. For the artist they can be relatively inexpensive to make, easily distributed, and affordable to the general public.

An astonishing number of artists are making books now, Steir pointed out. For an unknown artist, or one not living in a major urban area, it’s a way to have one’s work seen and, also, to curb the authority of galleries and museums in defining taste and shaping culture.

Leandro Katz has made some fourteen books, printing at first with collectives, producing limited editions on small presses, then larger editions as new techniques became available. The artist can take over the milieu of books, a powerful medium for propagating ideas, Katz said, and should try to save the “idea” of a book from commercial trade. Self Hipnosis, his most recent work, contains an image and numeral system interpreted by a continuing text. The reader becomes actively involved in the construction of the book, thrust out of the customary role of passive consumer or spectator.

Photographer Eve Sonneman has just finished her first book, Real Time, a collection of her favorite photographs. The “passing of time, moment to moment” is conveyed through double-image photographs side by side, Sonneman chose the book format for its concision and availability. She supervised the making of the book and reproduction of her photographs.

Robert Barry, who saw “the book as book” rather than as a carrier of information, had initially been invited by a dealer to make a book, Zero to 1, with Vito Acconci. Now Barry’s books usually have no title, no beginning, and no end, but each page has an isolated descriptive phrase, “adding up” nothing, defying classical narrative structure. 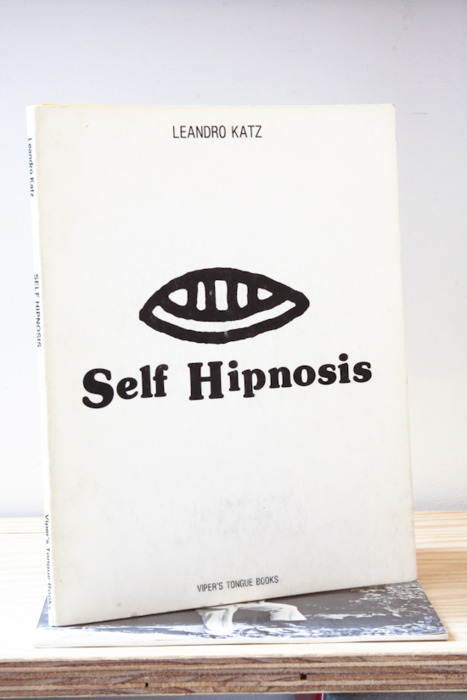 Steir asked, “When does something become a book? Is ‘sequentialness’ in form necessary?” Katz replied that his books are not objects that reveal themselves, but reveal instead the didactic process of language. At this point the audience brought up the question of the economics of producing books, asking whether financial considerations limit creativity. The speakers outlined ways of making books cheaply, saying that with offset printing and xerography anyone can afford to make a book—cost being related to the degree of elaboration. Also, grants for making books are now available.

Again the audience asked whether the artist’s book will remain democratic, “devaluing the ‘art object.’” Would not hand-signed, limited-edition works eventually become like other precious art, increasing in price and in the hands of few wealthy collectors?

The panelists said this would certainly happen with limited editions, but their own books are in unlimited editions. Steir’s company will not accept any other kind.

Is it possible to make money from books? All said returns are slim—definitely not a money-making venture.

Katz said again that for him the form is a search for a language outside the general language of books. Able to read those persons not usually reached by art, the artist can gain some idea of potential audience and the general culture.

Do any national book chains take artists’ books? Not many, Katz said, but he advocated keeping the distinction between artists’ books and general trade books, with a special section for these technical and didactic investigations.

Medrie MacPhee, a painter from Canada, studied at Nova Scotia College of Art and Cooper Union [and] works at Printed Matter.

Written by Medrie MacPhee, “Unlimited Editions” was originally published in Women Artists News 3, no. 3 (Summer 1977): 4; and reprinted in Judy Seigel, ed., Mutiny and the Mainstream: Talk That Changed Art, 1975–1990 (New York: Midmarch Arts Press, 1992), 67–68. In Terms Of thanks Midmarch Arts Press for permission to republish this review.