May 8, 2014 By Alexandra Anderson-Spivy
Papers

What Price Art? A Market of Mirrors

The paper [by Alexandra Anderson-Spivy] excerpted below, an explanation of how to “make a market in a living artist’s work,” was a highlight of the [“What Price Art?”] conference. Further details appear in Ronald Feldman’s truth-in-jest advice later in the year.

“What Price Art? A Market of Mirrors”
Friday, April 26, 1985
What Price Art? The Economics of Art: An Agenda for the Future
New York University, Graduate School of Business Administration, New York 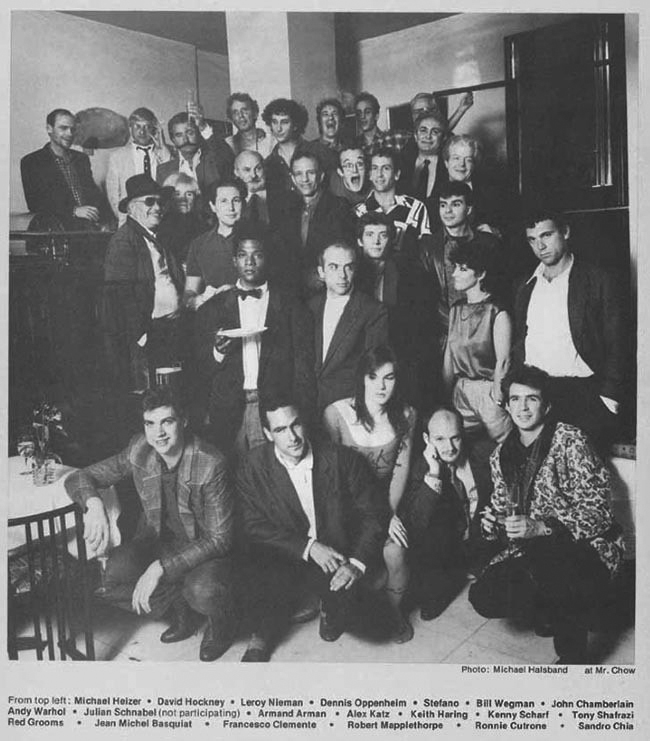 The art world in 1985 at Mr. Chow (photograph by Michael Halsband)

Art is a conveyer of status, a vocabulary of power. Men and women of wealth and influence, after they have acquired their money and power, need signs and symbols of their importance. Collecting art is often a way to gain entry into a desired social stratum….

How do dealers “make a market” in a living artist’s work? With virtually any new painting commanding an entry gallery price of $1,200 to $2,550 (sculpture begins a bit higher), there are price thresholds that a new or unrecognized artist must break through as he or she goes up the ladder. Assuming the dealer truly believes in the quality of the work, he [sic] must publicize this belief through exhibitions, critical reviews, word-of-mouth….

Dealers try to get their artists’ work seen by museum curators [and get] well-known, serious collectors to buy. Many galleries will only release works by certain artists to certain collectors, recognizing the Doppler effect of those collections. These collectors are also likely to be on museum boards and to encourage recognition of artists they favor at those institutions. Ten percent or 20 percent discounts [or more] off quoted prices to valued customers are common. (I have heard it rumored that some sales are made at up to 80 percent off quoted gallery prices.) Sales to museums at far-below-market prices will permit the dealer to jack up subsequent prices. The aura of market activity can also enhance an artist’s reputation and build market interest. There is a high risk-high reward factor…. Collectors respond to the idea of buying a hot young artist’s work at prices which will escalate rapidly. The idea of investing in contemporary art is rather new, and one which reputable dealers claim they do not use as a sales tool. But the media attention given such artists makes that kind of hard sell almost unnecessary, since speculation becomes a tacit factor in everyone’s mind.

About three years ago, I noticed a brand new painting by Jean-Michel Basquiat hung in the loft of a famous artist. He said, “This time I wanted to get in at the beginning. I’m tired of seeing the collectors make all the profits.” In three years, Basquiat’s prices have risen precipitously. Sales to major collectors also build an artist’s image and thus allow his prices to rise. Once an artist’s reputation is established, the auction house may play a part. Sales at auction are not only important exposure … they publicly ratify prices. Dealers have been known to put up a work at auction and buy it back themselves simply to establish a price…. If works are “bought in” (i.e., do not reach their reserve price), a certain superficial credibility of price still remains to the public at large. However, savvy collectors who follow auctions closely may then consider a picture “burned,” thus making it harder to sell subsequently….

Because the “value” of a new work is in fact so much a matter of opinion, those who wish to participate in the game soon discover that becoming an insider, i.e., having access to the informal as well as the formal network of information about the art, is crucial…. In the oddest way, works of art achieve value because certain individuals in certain sectors of the system decide they are valuable, but much of what goes on goes on behind the scenes…. An artist whose production is very small or who shuns the publicity machine [may not achieve] “brand name” status. [Yet] in the long run … mediocre pieces bring mediocre prices and great works bring ever-greater prices. 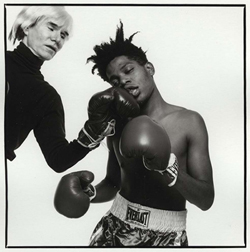 Another market factor is the “auction ring.” A group of dealers interested in the same material agree not to bid against one another, assigning one to bid unopposed. After the sale they reauction the things among themselves. [This] is strictly illegal. But, when done skillfully, it is almost impossible to uncover. Auctions have also been manipulated in another way. Dealers bid up prices of their own artists even if they themselves have to buy the work. Then they call claim the auction price as ratifier of prices in the gallery. Or it may be arranged in advance to have people (assigned to go up to a certain price) bid on a work, thus pushing up the price.

In recent years, auction houses have attracted a much wider public, often competing with the dealer for the collector’s dollars, so that antagonisms between the two have surfaced. Large advertising budgets, increasing media publicity, glossy catalogues, and an aura of theatrical glamour attract high rollers to the auction rooms (recently refurbished) of Sotheby’s and Christie’s. [R]ecord-breaking prices are touted widely, while heavily bought-in sales are played down whenever possible. Auction houses have learned how to use the tools of modern marketing. Michael Thomas, a former investment banker, in a column about the forthcoming Sotheby’s sale of pictures owned by the late Florence Gould, [wrote that] “advance publicity would have us believe that the equivalent of the Jeu de Paume or the Phillips Collection are being disgorged at auction, but by and large … the pictures are pretty and accessible, just the kind of thing with which rich Arabs like to decorate their Home County mansions.”

The combination of hype to create demand that takes advantage of ignorant, cash-heavy, status-hungry consumers of art is hardly a new one, though it may operate more widely and efficiently than in the days of Joseph Duveen and Bernard Berenson. Policies of full disclosure for critics, scholars, and curators (to reveal any vested interest in art they write about or curate) and for dealers and auction houses might go a long way towards correcting the abuses of the art market as we know it. Meanwhile, caveat emptor remains sound advice.

Written by Alexandra Anderson-Spivy, “What Price Art? A Market of Mirrors” was originally published within Cynthia Navaretta’s “Conference: What Price Art?” in Women Artists News 10, no. 4 (June 1985): 5; and reprinted in Judy Seigel, ed., Mutiny and the Mainstream: Talk That Changed Art, 1975–1990 (New York: Midmarch Arts Press, 1992), 237–38. In Terms Of thanks Midmarch Arts Press for permission to republish this review.