May 7, 2014 By Cynthia Navaretta
Conferences

Another ’80s workshop on spinning art into gold—and as motley a collection of speakers as one could imagine, even on such a fey topic. As it happens, my community and I recently had dealings with one of them—the representative from the Port Authority—only instead of “Arts as an Industry,” she detailed why our historic district should be trashed for the benefit of the Port Authority. That report, with figures and measurements and citations, was, as we proved in court, a complete fiction, but it served the purposes of those receiving it and became fact. Such diddling is of course hardly news in city politics—or in business and real estate either, as we see increasingly in the papers these days. But in art? Let’s just say the figures here sound official, for what that’s worth, but don’t bet the farm.

On the other hand, at least from my limited experience, Alexandra Anderson-Spivy’s rundown on the workings of the art market can be taken as a marvel of acute reporting. That is, you’ll love it—and relish the hindsight. 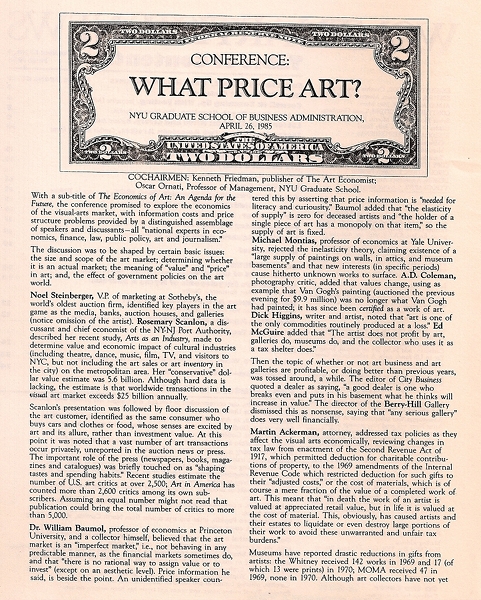 Titled “What Price Art,” and provocatively subtitled “The Economics of Art: An Agenda for the Future,” the conference promised to explore the economics of the visual arts market, with practical details on costs and price structure provided by “national experts in economics, finance, law, public policy, art and journalism.”

Noel Steinberger, vice president of marketing at Sotheby’s, the world’s oldest auction firm, identified key players in the art game as the media, banks, auction houses, and galleries (notice omission of the artist).

Rosemary Scanlon, a discussant and chief economist of the New York–New Jersey Port Authority, described her recent study, The Arts as an Industry, made to determine value and economic impact of cultural industries (including theater, dance, music, film, television, and visitors to New York City, but not the city’s art sales or art inventory) on the metropolitan area. Her “conservative” estimate was $5.6 billion. Although hard data is lacking, worldwide transactions in the visual art market are estimated at over $25 billion annually.

Scanlon’s presentation was followed by floor discussion of the art customer. The important role of the press was briefly touched on as “shaping tastes and spending habits.” Recent studies estimate the number of US art critics at over 2,500; Art in America has counted more than 2,600 critics among its own subscribers. Assuming an equal number might not read AiA could bring the total number of art critics to more than 5,000.

Dr. William Baumol, professor of economics at Princeton University, and a collector himself, described the art market as an “imperfect market,” i.e., not behaving in a predictable manner, as financial markets sometimes do not. Therefore, he said, “there is no rational way to assign value or to invest” (except, of course, on an aesthetic level). Price information, he said, is beside the point. An unidentified speaker contradicted him on that claim, asserting that price information is “needed for literacy and curiosity.” Baumol added that “the elasticity of supply” is zero for deceased artists and “the holder of a single piece of art has a monopoly on that item,” so the supply of art is fixed.

Michael Montias, professor of economics at Yale University, rejected the inelasticity theory, claiming existence of a “large supply of paintings on walls, in attics, and museum basements.” New interests (and rising prices) in specific periods cause hitherto unknown works to surface. 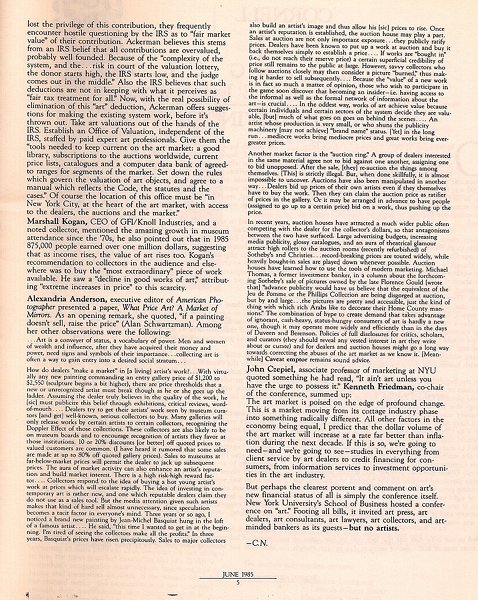 A. D. Coleman, photography critic, added that values change, using as example that van Gogh’s painting (auctioned the previous evening for $9.9 million) was no longer what van Gogh had painted; it has since been certified as a work of art.

Dick Higgins, writer and artist, noted that “art is one of the only commodities routinely produced at a loss.”

Ed McGuire added, “The artist does not profit by art, galleries do, museums do, and the collector who uses it as a tax shelter does.”

Then the topic of whether or not art business and art galleries are profitable, or doing better than in previous years, was tossed around for a while. The editor of City Business quoted a dealer as saying, “A good dealer is one who breaks even and puts in his basement what he thinks will increase in value.” The director of the Berry-Hill Gallery dismissed this as nonsense, saying “any serious gallery” does very well financially.

Martin Ackerman, attorney, addressed tax policies and changes in tax law by which the Internal Revenue Code says, in effect, that “in death the work of an artist is valued at appreciated retail value, but in life it is valued at the cost of material. This, obviously, has caused artists and their estates to liquidate or even destroy large portions of their work to avoid these unwarranted and unfair tax burdens.”

With allowable tax deductions for donations of art restricted to “adjusted costs,” museums report drastic reductions in gifts from artists. The Whitney received 142 works in 1969 and 17 (of which 13 were prints) in 1970; MoMA received 47 in 1969, none in 1970. Although art collectors have not yet lost the privilege of this contribution, they frequently encounter hostile questioning by the IRS as to “fair market value.” (Ackerman believes this stems from a probably well-founded IRS belief that all contributions are overvalued.)

Marshall Cogan, chief executive officer of GFI/Knoll Industries and noted collector, mentioned the amazing growth in museum attendance since the ’70s. He also pointed out that 875,000 people earned over one million dollars in 1985, suggesting that, as income rises, the value of art rises too. Cogan’s recommendation to collectors was to buy “the most extraordinary piece of work available.” He saw a decline in good works of art, attributing current “extreme increases in price” to this scarcity.

John Czepiel, associate professor of marketing at New York University, quoted something he had read: “It ain’t art unless you have the urge to possess it.”

Kenneth Friedman, cochair of the conference, summed up: “The art market is poised on the edge of profound change. This is a market moving from its cottage industry phase into something radically different. All other factors in the economy being equal, I predict that the dollar volume of the art market will increase at a rate far better than inflation during the next decade. If this is so, we’re going to need—and we’re going to see—studies in everything from client service by art dealers to credit financing for consumers, from information services, to investment opportunities in the art industry.”

Perhaps, however, the clearest indicator of art’s new financial status is simply this conference itself. New York University’s School of Business hosted a conference on “art.” Footing all bills, it invited press, dealers, consultants, lawyers, collectors, and bankers to attend as its guests—but no artists.

Written by Cynthia Navaretta, “The Art Talk That Ate New York” was originally published as “Conference: What Price Art?” in Women Artists News 10, no. 4 (June 1985): 4–5; and reprinted in Judy Seigel, ed., Mutiny and the Mainstream: Talk That Changed Art, 1975–1990 (New York: Midmarch Arts Press, 1992), 236–37. In Terms Of thanks Midmarch Arts Press for permission to republish this review.