A Special Kind of Ordinary 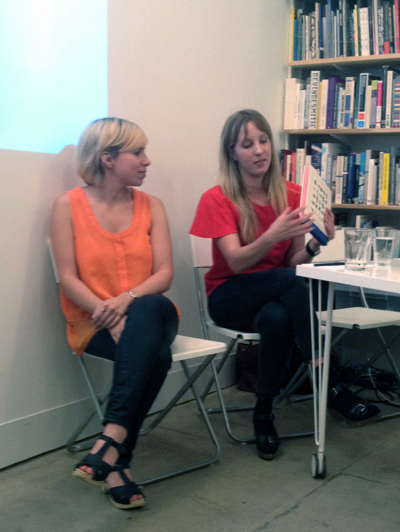 There’s a special kind of ordinary that folks in the art world love. Artists, curators, and critics often fall over themselves to praise the everyday, elevate the banal, and highlight the overlooked, momentarily relegating what normally would be banal to a distinct realm of interest and reflection. But sometimes the ordinary is, well, simply unremarkable. The discussion that took place during “Blonde Art Books: Artist Conversation and Launch” was ordinary in that unexceptional sense. For this evening’s event, the three people involved in the publication of an artist’s book, Sara Cwynar’s Kitsch Encyclopedia, met to present and discuss their work and to celebrate the launch of a special collector’s edition of the book.

In 2012 the New York–based curator Sonel Breslav founded Blonde Art Books, a project—one hesitates to call it a business—that sells artist’s books at exhibitions and fairs, as well as through an online store. Originating as a blog, Blonde Art Books was physically housed for most of 2013 at Schema Projects in Brooklyn. Kitsch Encyclopedia is the first book she published under the imprint.

Breslav stated numerous times that she intended her digital slide presentation to loop (which it eventually did, kinda rapidly), her words themselves becoming looped, which was unintended metacommentary on the direction of tonight’s conversation.1 She repeated fuzzy notions about accessible spaces, broader audiences, sharing information, and collaboration. For example, Breslav expressed interest in “materials as objects and the information they embody,” a phrase that exemplifies the kind of language that has developed around the everyday—at least in the contemporary art world—that sounds agreeable but, if not explained in relation to tangible situations, is trite, if not hollow or incomprehensible.

Breslav said she was given opportunities to do pop-up events, which evolved into full exhibitions—“my comfort zone,” she said. I wish she had better explained her curatorial projects, describing specific installation shots in her digital slide show or talking about other recent exhibitions, such as She Was a Film Star before She Was My Mother, held a few months ago at Dorsky Gallery in Long Island City. Breslav glossed over what she called a “summer tour,” which I later discovered was a Blonde Art Books traveling show for which she gave talks and conducted workshops on artist’s books across the Mid-Atlantic and Midwest last June and July.

Born in Canada and based in New York, Sara Cwynar identified herself as a studio photographer and a graphic designer. She explained that Kitsch Encyclopedia was, in its original form, a one-of-a-kind hand-assembled artist’s book that she had started four years ago as a student. For this and other works, Cwynar adopts a strategy of appropriation, using other people’s images garnered from “the New York Public Library, flea markets, my parents’ basement, old encyclopedias.” Stuff from the 1950s through the 1970s interests her in particular, which she finds, removes from circulation, reworks, and redistributes, usually as digital prints for gallery display. While her art is largely visual, the book incorporates texts from three authors—a few sentences from Milan Kundera here, a few from Jean Baudrillard and Roland Barthes there—interspersed with her own writing. “All the texts are mashed together,” she said. The book’s alphabetical, encyclopedic format is a “quaint form of knowledge-containing,” and its organizing principle was Kundera’s definition of kitsch.

Cwynar claimed that the images in Kitsch Encyclopedia—photographs of flower arrangements, ancient sculpture, obsolete electronic equipment, and outer space—are the “stuff we see everyday,” which is certainly true if you’re the kind of person who sifts through old issues of National Geographic, sets of Time Life books, and vintage photography how-to manuals. (The artists Matthew Craven, Abigail Reynolds, and Björn Meyer-Ebrecht also mine these sources, but walk the aisles of any art fair and you’ll see dozens more.) Cwynar didn’t elaborate on the specific nature of the images in her book, apart from an awkward explanation of Kundera’s notion of kitsch, which made me wonder how purposeful or random her choices were. I also wondered why the handmade Kitsch Encyclopedia was republished in print—one thousand copies were made—instead of posted online using platforms such as Tumblr and Pinterest that are the legacy of André Malraux’s imaginary museum. Cwynar pronounced that we live through images instead of real experiences, and that we’re desensitized to horrifying images, reacting the same to pictures of bombings and flowers. Pundits have voiced identical opinions for decades. What’s significant about these positions now?

The third speaker was Corina Reynolds, an artist, bookbinder, and founding partner of Small Editions, a studio and consultancy that helps produce artist’s books. She helped to make the portfolio of six zines included in the deluxe version of Kitsch Encyclopedia, which were hand-stitched into the original book. Summarizing her background, Reynolds learned the technical processes for bookbinding as an undergraduate at the University of California, San Diego. Seemingly without a business plan, the fledgling Small Editions started in a living room, became a website, and expanded through networking. Suddenly money was there, Reynolds said, after working on projects with Dash Snow and Dan Colen. (The chronology and circumstances were unclear.) She then described a book that Small Editions produced in 2013, Sheryl Oppenheim’s Black Hours, which comprises screenprints of drawings that were inspired by an illuminated manuscript in the Morgan Library and Museum. 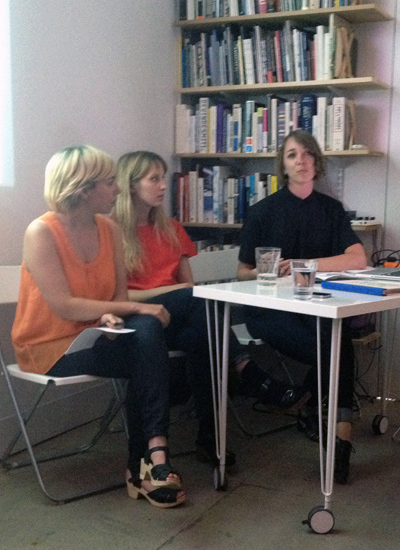 The conversation among the three panelists lagged after their individual presentations, perhaps indicative of a lack of planning, resulting in rote observations. Breslav argued that Kitsch Encyclopedia “is very specific to Cwynar’s practice but also has this universality,” something that could described any number of artworks. Breslav also stressed—several times—how she plays multifaceted roles in the contemporary art world (as curator, publisher, collaborator, et cetera). She also delighted in discussing trivial details of the book’s production. For instance, the Chinese printer Breslav contracted required that she and Cwynar remove images of Disney characters and nudes from Kitsch Encyclopedia. (Publishers have certainly policed morality and been overly protective against copyright infringement for decades.) The photographer did sneak in a picture of a naked body: “There are nudes in the zines,” Cwynar said. I got the impression that Breslav was tickled at the collaborative process behind publishing a book, discovering for the first time the types of decisions people have made along the way when producing a book—for centuries. Oh, process.

Cwynar wondered aloud what it means to make an image that will be seen by a million people but neglected to offer an answer, even though she had worked as a designer for The New York Times Magazine until last year. How the context of images change over time greatly interests her, she disclosed, which sounded profound until I remembered that this is the inevitable fate of nearly every picture ever made.

During the audience Q&A, a man visiting from Australia fawned over Cwynar’s work, and a woman in the front row asked the photographer about her font choice. “I used the ugly version on purpose,” Cwynar explained for the “1970s” typefaces in the book and on her website. “They’re really all nostalgic fonts.” This response made me think about how the term “futuristic” now specifically characterizes things that are forty and fifty years old. 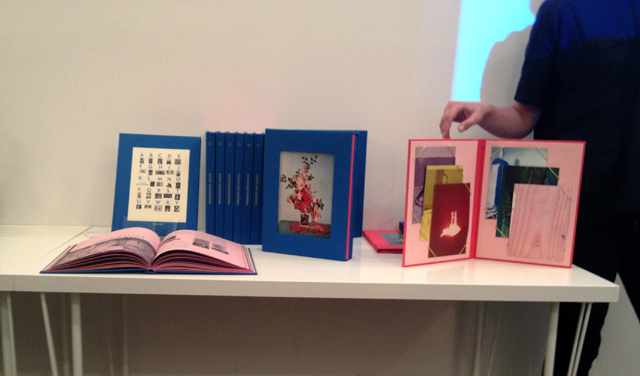 A display of Kitsch Encyclopedia (photograph by Christopher Howard)

Cwynar spoke more about the life of an image over time, how it loses and gains value, and also about what she referred to several times as an image’s patina. When looking at decades-old photographs in the New York Times, she explained, you can discern a quality, if not a style, of the era. You can tell “what looks contemporary,” she commented, “what looks classy.” That’s periodizing in a nutshell. Cwynar added that nostalgia is strong in graphic design of the present moment, and Breslav identified what she called “outdated colors” in Cwynar’s work. What exactly is an outdated color?

Breslav feels the DIY culture that produces free “takeaway” publications is going strong, but she nevertheless chooses to publish more expensive art books. Reynolds is a believer in the precious object you can hold in your hands, whether that’s a limited or larger edition. The group talked some about scarcity versus mass production, but that’s a conversation which usually ends in stalemate.

Revealed only at the end of the night was the fact that Cwynar’s book was largely financed by a successful Kickstarter campaign to the tune of $17,386 from 310 backers. (Wow!) I realized that the three speakers did an excellent job of avoiding conversation on financial issues, one glaring issue in the art world that needs more sustained and vocal attention. Since Breslav and Reynolds work in a multifaceted space that combines elements of for-profit, nonprofit, DIY, and entrepreneurial approaches, it would be beneficial for them to approach their models frankly, offering to the audience the solutions that they’ve found and challenges that they’ve faced.2 It would be interesting to know more about how art workers in their late 20s can sustain a practice and make a living, in New York and around the world.

1 Neither the panelists nor the Independent Curators International staff attempted to subdue the highly irritating bouncing iTunes icon on the Apple laptop’s dock, which was visible every few seconds on the projected screen for the full hour-and-a-half duration of this event.

2 Cwynar works with traditional art galleries and presumably makes a living from her art, since she left her New York Times Magazine job in 2013 and didn’t mention another one.