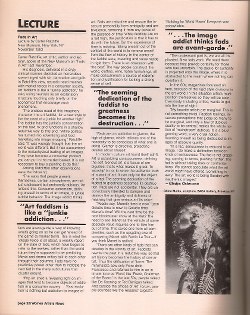 Although they may seem like opposites to the casual observer, Carter Ratcliff has some things in common with Hilton Kramer: both can talk and write marvelously about art-and-the-culture, and I’m probably not going to like the art either of them likes. This is, of course, not the Hilton Kramer of the postmodernism panel, the one who arrogantly slaps down a serious question, but the Kramer who fulminates so engagingly against the “advanced” political thinkers in art’s infrastructure that we applaud those shysters for inspiring him.

Carter Ratcliff, on the other hand, analyzes art’s moves from a more detached and, as a rule, more tolerant position. He nearly always sharpens our view of what we have only sensed or supplies an aspect we have entirely missed—in some cases the defining one. Here the focus is on “art image,” always an issue in modern art, now, Ratcliff says, a “junkie addiction.”

Carter Ratcliff, art critic, author, and lecturer, spoke at the New Museum on “Fads in Art.” His diagnosis, delivered in a dryly clinical manner, depicted a horrendous condition with tinges of sin, damnation, and guilt. Art faddism is like a “junkie addiction” in which neurotic need meshes with the market forces of our consumer society, he said. Stressing neurosis as explanatory structure, he touched only briefly on economics that encourage such phenomena.

“The endless need of the art faddist for a new style is like the need of a junkie for another high,” he said. The faddist has the junkie’s concentration on the next fix and functions in a shallow reductive way to this end. “Politics has turned into advertising and food marketing into image shopping…. It was wrongly thought that the art world was different. But it has succumbed to the metaphysical trading of art images. They have become a consumer product you can put in the market basket.” Moreover, “It is not necessary to buy a painting to do this.”

Among Ratcliff’s other observations were the following:

“The ways that people present themselves, certain atmospheres, are not just unpleasant but profoundly dubious. Art reflects this. Consumer extremism, defining oneself in terms of an image, is junkie faddist behavior. The image addict thinks fads are avant-garde, a way of knowing what’s going on so he can get ‘ahead of the game’ (a market term). This is what the Village Voice is all about, a weekly report on the state of fads, which have begun to refer to themselves, rather than the world future they’re supposed to be predicting. Movie and drama critics talk to each other through their columns.

“Pop art shed a revealing light on images that tend to become objects of addiction in a consumer society…. ‘Fast evolution’ is [an] addiction to images of art. Fads are reductive and rescue the insecure personality from ambiguity and ambivalence, removing any sense of the passage of time…. To take oneself out of the context of the world is to remove oneself from the flow of history. Faddists on a fad high claim the justification that they’re in touch with the future. But fads have no predictive power other than to indicate the next fad in the many subcultures that cluster around. In the center of the faddist aura, meaning and value reside in rigid form.

“There is an obsession with ‘the best.’ The way people construct the world, clothes, wine, home furnishings, all make consumerism a source of redemption and justification for lacking a strong sense of self. Fads are an addiction to glamor, the high of glamor, which relieves one of the necessity to be conscious of what one is doing. Glamor is directive, projecting desires about oneself.

“In modern culture, art found itself adrift. Art is actualizing consciousness, defining the self. Serious art is a tissue of ambiguities—that’s what makes it great. To ‘worship’ is not to serve the authentic truth of a work of art. It can only be the object of a fad. The seeming dedication of the faddist to greatness becomes its destruction. Fads are not accidental. They are unconsciously intended to dampen and destroy the ambiguity and richness of meaning that give serious art its value.

“People say, ‘Manet’s time is now,’ ‘Leon Golub’s time is now.’ Is Golub’s time Manet’s time? Will the next time be the next blockbuster show at the Met? The need to see Manet as the vehicle of some absolute value requires one to take him out of time. This saves one from all complexities, such as the upsetting one of comparing Manet with Fantin-Latour—if you think Manet is radical. 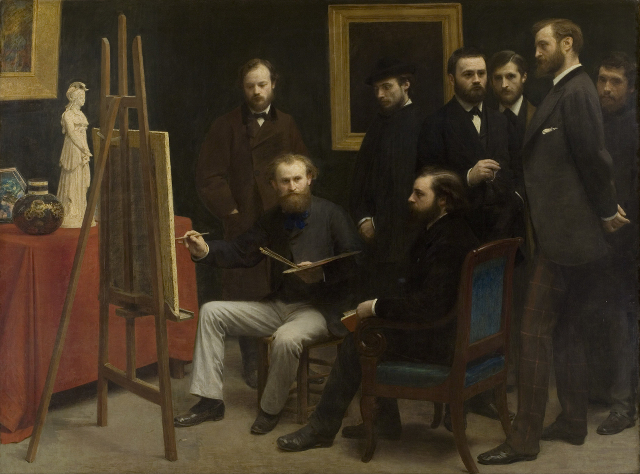 “There are other kinds of fads that can develop in the vicinity of art. Faddists rewrite the past in a reductive way, so that art history becomes the history of one artist. Thus the deification of Turner. The Minimalists saw only Piero della Francesca and referred to him in an intimate tone as ‘Piero,’ like ‘Frank, Chairman of the Board.’ In the late ’50s, people talked like de Kooning or Ted Berrigan talked. And around the offices of Artforum, people sounded like the Reader’s Digest’s ‘Building for World Power.’ Everyone was polysyllabic.

“The unpleasant part is, we are all implicated. New fads work. We need them because they provide certainty for those who feel uncertain. The desire for authority is projected onto the image, where it is abstracted to the realm where nothing can question it.

“In the ’60s, magazines focused on fads, because of the rigid style divisions in the art world. In this situation, artists must position themselves so they will be seen. Everybody, including critics, wants to get into the line of sight.

“My favorite artists are marginal. This is not something trivial. Faddish feelings, insecure perceptions that judge so many to be marginal and only a few of dubious quality to be central, make the whole notion of ‘mainstream’ dubious. It is a bludgeoning word, a very cruel notion … flaunting oneself as being dedicated to images of absolute quality.

“In a fad, seriousness is reduced to an image. I do make a distinction between kinds of seriousness. The fad is not grappling, coming to terms, pushing further, [avoiding] risks or confrontations. Something is awry. The art world is being flooded with inauthentic images.”

Written by Gladys Osterman, “Art Image as Consumer Product” was originally published in Women Artists News 9, no. 3 (Spring 1984): 22; and reprinted in Judy Seigel, ed., Mutiny and the Mainstream: Talk That Changed Art, 1975–1990 (New York: Midmarch Arts Press, 1992), 225–26. In Terms Of thanks Midmarch Arts Press for permission to republish this review.