This drop-dead blue-ribbon affair managed against the odds to have some dramatic moments, like John Simon’s outraged denunciation of Michael Graves’s architecture right to Michael Graves’s face! But mostly it was just infuriating. My report (originally signed “Art Lover”) was intended to be humorously savage. It is, in any event, entirely true. OK, I was First Lady Questioner (somebody had to do it), but Hilton Kramer’s reply and the rest were exactly as quoted. 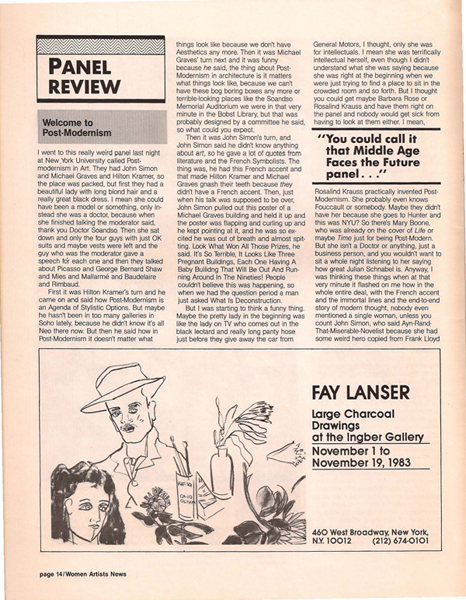 I went to this really weird panel last night called “Post-Modernism in Art and Literature,” only it was mostly John Simon, Michael Graves, and Hilton Kramer in the same room, so the place was packed. To start off, they had a beautiful lady with long blond hair and a really great black dress who talked about something you couldn’t understand because we were still trying to find a seat in the crowded room. She must have been a doctor, though, because when she finished the moderator said, thank you Doctor Soandso. Then she sat down and only the four guys with just OK suits and vests were there. The one who was the moderator gave a speech about how distinguished each of the others was, as if we didn’t know, and then they all started to talk about George Bernard Shaw and Baudelaire and Picasso and Rimbaud and Mallarmé and Mies.

Hilton Kramer was first and he said post-modernism is an Agenda of Stylistic Options, but then he said how in post-modernism it doesn’t matter what things look like because we don’t have aesthetics any more. It was Michael Graves’s turn next and he said the thing about post-modernism in architecture is it matters what things look like, because we can’t have these big boring boxes any more or terrible-looking places like the Somebody Memorial Auditorium we were in that very minute in the Bobst Library. But, he said, it was probably designed by a committee, so what could you expect, and everyone laughed.

Then it was John Simon’s turn, and he said he didn’t know anything about art, but he gave a lot of quotes from literature and the French Symbolists. The thing was, he had this awesome French accent and you could see that made Hilton Kramer and Michael Graves gnash their teeth because they didn’t have a French accent. Then suddenly, just when his talk was supposed to be over, Simon unrolled a poster of a Michael Graves building and held it up, stabbing the paper with his finger while it flapped and curled in the air. He was so excited he was out of breath and almost spitting. “Look What Won All Those Prizes!,” he sputtered (really). “It’s So Terrible It Looks Like Three Pregnant Buildings, Each One Having A Baby Building That Will Be Out And Running Around In The Nineties!” People couldn’t believe this was happening, that John Simon was saying these things with Michael Graves sitting right next to him, so when we had the question period a man just asked, “What Is Deconstruction?” But I thought, he had the poster with him. That was planned!!

I was starting to think something else, too. I was thinking maybe the pretty lady in the beginning was like the lady on the TV game show who comes out in the black leotard with the envelope, only she was for intellectuals. I mean I had the idea, Why isn’t there a woman on the panel? There are some very important women critics. Then, suddenly, it flashed on me, how in the whole entire deal, with the French accent and the immortal lines and the end-to-end story of modern thought, nobody mentioned a single woman, unless you count John Simon saying Ayn-Rand-That-Miserable-Novelist because she had a terrible hero based on Frank Lloyd Wright, though I wondered at the time how he knew, because I, personally, could not read Ayn Rand. Anyway, nobody mentioned a single painter or writer or anyone who was a woman who wasn’t their girl friend. I thought, are these guys doing Janson’s History of Art all over again, only for all the arts and literature and poetry?

Of course you could tell they still thought about women, from little things they let drop. Like Michael Graves said if there was a threshold in one of his buildings, “If I Ever Got Married, God Help Me, I could Carry My Bride Over It.” So you gathered he didn’t want to get married, which might be why his buildings have to have the children. That’s OK with me, because they’re pretty good-looking buildings, but maybe the roofs leak, because he said something about having a “27-bucket building” and everyone laughed. Then he kept saying that if he had to make a building this way or that way or another way he didn’t want to, he’d rather be a lawyer. He said that a lot, so I figure he’s probably being sued, which may be a post-modernist development in the arts everyone forgot to mention. Another thing that showed he thinks about women was, after the part about the Bride and the Threshold, he said, “Going into a building is like Penetrating a Membrane.” You could tell he thought that was pretty daring. 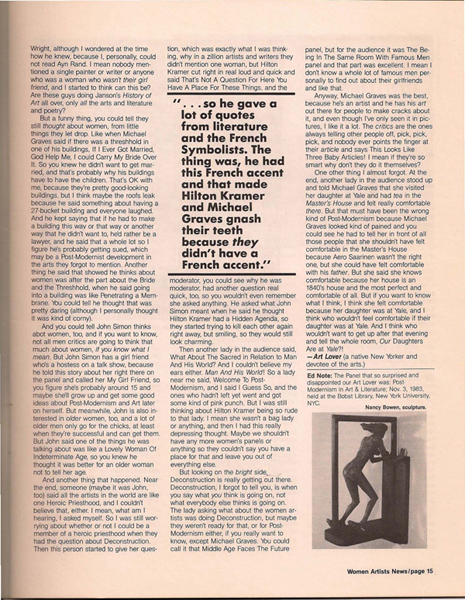 John Simon thinks about women, too, or anyway about his girl friend, because he said she’s a hostess on a talk show and told a story about her right there on the panel. He called her “my girl friend,” so she’s probably around 15 and she could grow up and get some good ideas about “Post-Modernism and Art” herself some day. But, meanwhile, John is interested in older women, too. A lot of older men only go for the chicks, but he said something was like a Lovely Woman Of Indeterminate Age. (So you knew he thought it was better for an older woman not to tell her age.)

Then something amazing happened. Near the end, one these men (maybe it was John, too) said all the artists in the world are like One Heroic Priesthood. Yes, he did. In 1983. So I was still worrying about whether I could be a member of a heroic priesthood when they had the question about Deconstruction. Then another person started her question which was exactly what I was thinking, which was why in a zillion artists and writers they didn’t mention one woman, but Hilton Kramer cut in real loud right away and said, That’s Not A Question For Here! You Have A Place For These Things!, which was dumb, because he was the one who didn’t mention women, but the moderator had another question real quick. He asked John Simon what he meant when he said Hilton Kramer had a Hidden Agenda, and they started trying to kill each other again, but smiling, so they would still look charming, and nobody said anything more about women.

Then another lady in the audience asked, What About The Sacred in Relation to Man And His World? And once more I couldn’t believe my ears. Man And His World! So a lady near me said, Welcome To Post-Modernism, and I said I guess so! Then the ones who hadn’t left yet got some kind of pink punch, but I was having a depressing thought. Maybe we shouldn’t have any more women’s panels, so they couldn’t say, You Have A Place For That.

But looking on the bright side, Deconstruction is really getting out there. Deconstruction, I forgot to mention, is when you say what you think is going on, not what everybody else thinks is going on. The lady asking what about women artists was doing Deconstruction, but they weren’t ready for it, or for post-modernism either, if you really want to know, except Michael Graves. You could call it that Middle Age Faces The Future panel, but for the audience it was The Being In The Same Room With Famous Men panel and that part was excellent. I mean I don’t know a whole lot of famous men personally to find out about their girl friends and all.

Anyway, Michael Graves was best, because he’s an artist and he has his art out there for people to make cracks about and it looks great. (I bet the roofs on nasty-looking buildings, like the Pan Am building, leak too.)

One other thing I almost forgot. At the end, another lady in the audience stood up and told Michael Graves that she visited her daughter at Yale and had tea in the Master’s House and felt really comfortable there. But that must have been the wrong kind of post-modernism because Michael Graves looked pained and you could see he hated to tell her in front of all those people that she shouldn’t have felt comfortable in the Master’s House because Eero Saarinen wasn’t the right Saarinen, although she could have felt comfortable with his father. But the lady said she knows comfortable because her house is an 1840’s house and the most perfect and comfortable of all. But if you want to know what I think, I think she felt comfortable because her daughter was at Yale, and who wouldn’t feel comfortable if their daughter was at Yale? And who wouldn’t want to get up after that evening and tell the whole room, Our Daughters Are at Yale?!

Written by Judy Seigel, “Welcome to Post-Modernism” was originally published in Women Artists News 9, no. 2 (Winter 1983/84): 14–15; and reprinted, in the above revised form, in Judy Seigel, ed., Mutiny and the Mainstream: Talk That Changed Art, 1975–1990 (New York: Midmarch Arts Press, 1992), 223–25. The version in Women Artists News differs considerably from the revised version. In Terms Of thanks Midmarch Arts Press for permission to republish this review.