I’ll Be Your Mirror 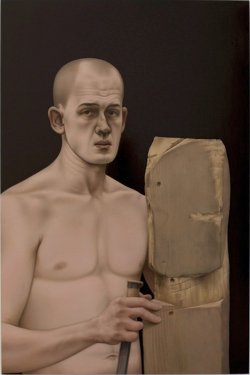 Matthew Miller’s work for the past five years has primarily involved naturalistic representations of his own unusually shaped, closely shaved head, usually with a neutral, enigmatic expression on his face. The Brooklyn–based artist talked about his paintings—oils on wooden panels executed in a painstaking old-master style—in front of a tight crowd at a gallery with a long, unwieldy name, Hansel and Gretel Picture Garden Pocket Utopia.

Miller stated that Can’t You See It, I Am One, his solo exhibition that is on view through December 21, was his first opportunity to do a show as a unit. This presentation, he said, has four propositions; they take the form of five untitled paintings from 2014 (one proposition comprises two highly similar works) that hang from the eastern wall of the gallery. He read from a short statement about the subject of his work, written a few years ago for the magazine Comment, that got the conversation rolling:

He isn’t looking at you. He’s looking at the picture-plane, the site of the methodological drama and the working space of painting. He is obligated to the spectatorial pretense of the portrait. The “black of portraiture” takes up the rest of the frame and, with its fact-of-the-surface application (a sign-painter’s), competes for presence. However, this black is cousin to the cinematic green-screen, or like the enchanting blackness of an open barn door at midday.1

“Oddly enough, I still stand by most of that,” Miller said. 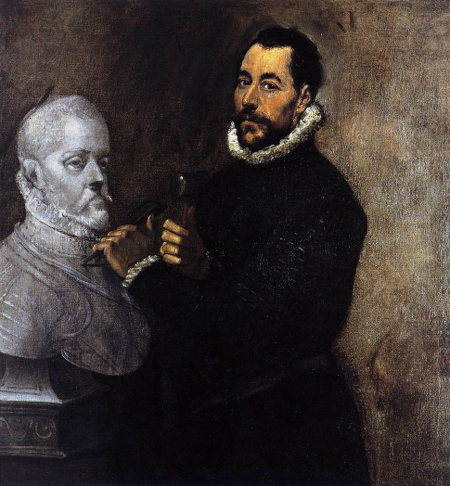 For this gallery talk he directed the audience’s attention to the largest work in the show, which shows the head and shirtless torso of a Caucasian man (Miller himself) standing next to a wooden beam, which has been chipped away by the chisel dangling from his right hand. The gallery’s press release compared the work to El Greco’s painting Portrait of a Sculptor (1576–78), which is said to depict Pompeo Leoni. A similar painting is Diego Velázquez’s Portrait of Juan Martinez Montañés (ca. 1635), and you can probably find other canvases with a similar pose and conceit. It’s classic art history. (Similarly, another Miller work shows the artist with brush in hand, not unlike Judith Leyster’s famous self-portrait , one by Vincent van Gogh, and many others throughout the ages—only here Miller doesn’t actually depict himself painting anything.)

Unlike many old masters, Miller wasn’t commissioned to paint his works. Rather he made them on spec for gallery display, not unlike most contemporary artists. It makes you wonder why he would labor for so long to make something depicting himself, rather than what might be pleasing to an art collector. “I do this with a great sense of self-awareness,” Miller said of his practice “not just show you that”—meaning, I think, the representational aspects of the image—but also to “take apart components of self-portraiture.” What is his relationship to the painted subject? “It’s a me-and-it thing,” he said. “He’s always the artist.”

Surprisingly, Miller does not use a mirror while in the studio. “I just know how to paint this guy’s face,” he said, and tries not to stylize him. But because the facial expression is neutral, the artist said, it is “less legible” and “more complicated.” Indeed, it’s difficult to read the subject’s face, other than by eliminating expressions of affect—such as happiness, anger, or disgust—that are perceptibly implausible. 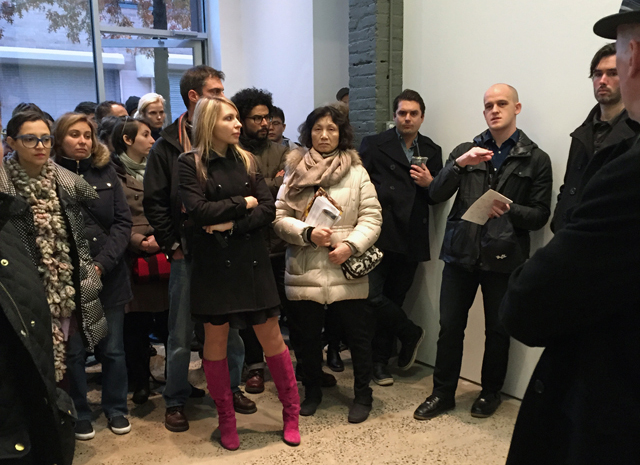 Matthew Miller on the level (photograph by Christopher Howard)

Miller aspires for a “painted plausibility” across his oeuvre, he said, and aims to sustain a persona, an idea a few audience members expanded on, tossing out descriptions such as iconic and archetypal. It might be more interesting, however, to think of the figure in Miller’s paintings not as elevated or ideal but rather as anonymous, a characteristic that makes the portrait specific or singular but unknown. After all, if you didn’t know these were self-portraits, you’d wonder why the artist produced five paintings of the same peculiar-looking person. When and how does Miller become less the artist and more just a guy in a picture?

Likeness and fidelity are important to Miller but not explicitly the point. For instance, the artist always leaves out the large, horseshoes-shaped scar on the right side of his actual head. Moreover, while comparing the five works at Pocket Utopia to images of earlier paintings, you plainly see how his treatment of the head and face changes from year to year, and not necessarily in a way that depicts the process or effects of aging. A Miller from 2014 differs from a Miller from 2012 or 2010.

Miller explained the painting’s background: he had set out to sculpt a self-portrait but failed. After making forty drawings of the abandoned carving, which was on view in the gallery, he embarked on the painting. Miller called the wood piece a “philosophical object,” describing it in the same way someone would describe a scholar’s rock. 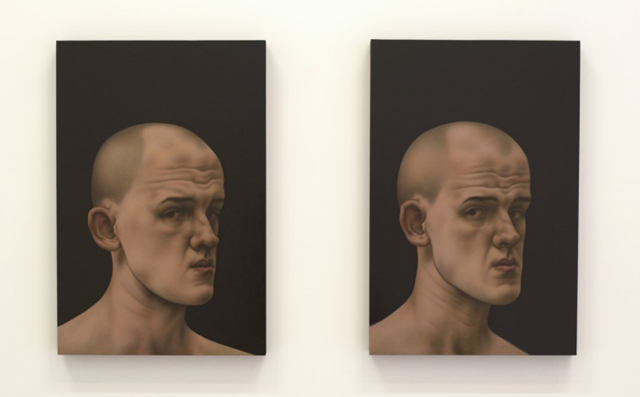 An audience member asked about the “chiseled male body” in the image, comparing the human body to the carving, shaping, and molding of sculpture. Miller said there are “types that are empirically me” in his art but admitted that his younger brother modeled for the torso—the artist was uneasy about his own body for the painting. Later, while looking closely at the work, I noticed that the treatment of the chest is gauzy, while the hand and face are more naturalistically detailed. The block of wood is somewhere in between. The levels of verisimilitude vary and therefore are not evenly distributed in a composition, which is perhaps what Miller meant by his self-reflexive approach to self-portraiture.

The talk and discussion lasted about a half hour, during which Miller gave away few secrets. One intriguing statement he made concerned the sturdy black background in most of his works, an opaque but reflective darkness that he identified as theoretical, metaphorical, and symbolic space. That black background fluctuates between an airless space to infinite depth, introducing substantial mystery into his work and raising a screen onto which a viewer’s ideas can be projected.