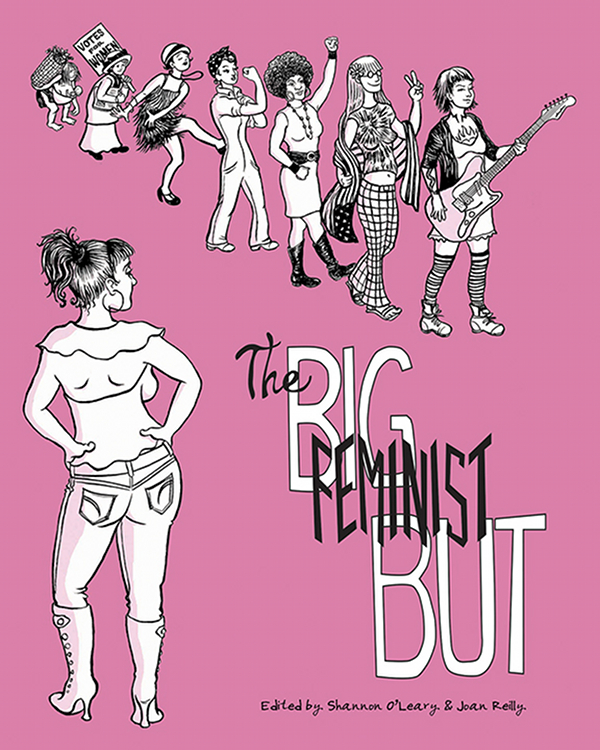 Clearly the editors of a new comics anthology heard the phrase “I’m a feminist, but…” one too many times. Taking a firm stance against the equivocal and perhaps self-deprecating attitude, Shannon O’Leary, a critic, editor, and author of Fortune’s Bitch, and Joan Reilly, an illustrator and comics artist, began work on The Big Feminist BUT: Comics about Women, Men, and the IFs ANDs & BUTs of Feminism. They commissioned more than forty creators—including a handful of men—to produce work exploring the multivalent meanings and critical relevance of feminism today.

Conceived of over four years ago, The Big Feminist BUT was fully funded in late 2012 through Kickstarter, with O’Leary and Reilly receiving a whopping $16,347 from 444 backers in 28 days, exceeding their goal of $13,995. “An Evening of Big Feminist BUTs” at Housing Works Bookstore Café presented engaging readings and a well-toned conversation from six of the contributors. The two editors stood quietly among the audience, which was largely female and mostly white, as it listened to the artists reading from the book and followed along the pages digitally projected onto a wall.

The husband-and-wife team of Sari Wilson and Josh Neufeld read their story, written by Wilson and drawn by Neufeld, which recounts Wilson’s experience of working at Playboy magazine in Chicago. Later during the panel conversation, Neufeld admitted that this was the first time he has drawn a “busty super babe,” finding a guilty pleasure in reproducing and then subverting a stereotypical idealized female. He instills humanity in his forms, Wilson said of her husband, so she trusted him. 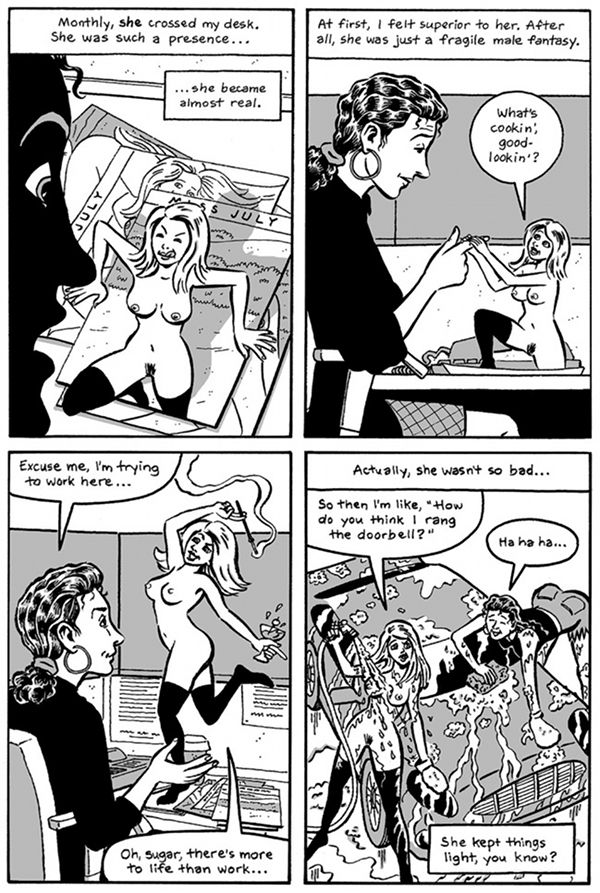 Next, Lauren Weinstein, creator of the graphic novel Goddess of War, read her story about having a baby, contrasted immediately by Abby Denson’s self-proclaimed rant about not wanting a baby despite outside pressure—or just innocent inquiries—from family and friends. Emily Flake, a staff cartoonist for the New Yorker, read a handful of single-panel jokes, and Gabrielle Bell, creator of The Voyeurs and Lucky, read her piece in dialogue with a friend.

The six participants squeezed into a semicircle of chairs on a tiny stage while the panel’s moderator, Heidi MacDonald, editor of The Beat: The News Blog of Comics and Comics Culture, stood on the floor and asked each person to describe their personal experience with feminism. Neufeld said he was raised by a proud single mom—the artist Martha Rosler—and grew up in a consciousness-raising environment. He considered himself to be a feminist man, joking that “I’m in touch with my feminine side … and I have a butt.” For Blake, the question is a nonissue: “Yes, of course.” Weinstein, paraphrasing Joni Mitchell from a recent interview, stated that women often sequester themselves in an insulated group instead of going toe-to-toe with sexism.

A graduate of the liberal, intellectual Oberlin College, Wilson identified as a feminist but with heavy theoretical baggage. She worked at Playboy at the age of twenty-seven, having no problem with pornography. Denson found equality to be logical, and Bell quickly squeaked, “Yes, I’m a feminist, too.” In contrast to Neufeld, Bell admitted, while growing up in rural Northern California, that she learned a woman’s looks were her most important attribute—being funny or smart were extra—and that she had to unlearn the idea. Later on MacDonald recognized that “we all want to be admired. We all have sexual feelings.” 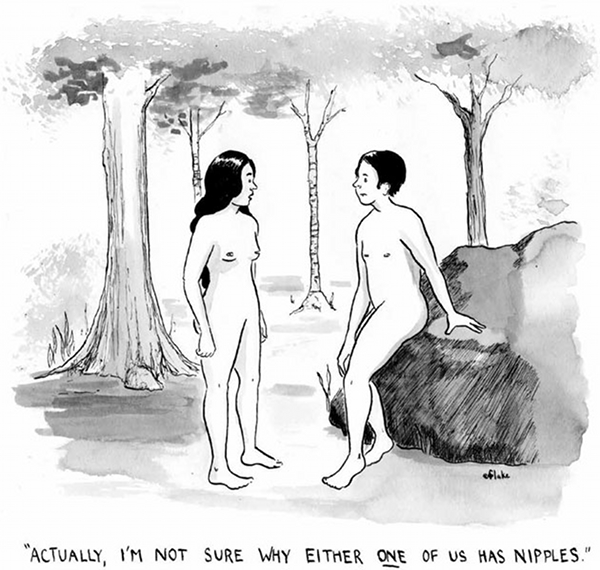 Hanging out with her New Yorker colleagues, Flake feels somewhat pressured to be jocular and subversive to fit in—though she said she’d behave that way anyway, as it’s in her nature to be sardonic: “I’ll one-up you on offensive shit.” She noted that a person’s gender is constantly called attention to in her professional world but found it hard to be depressed about her status as a token female cartoonist, saying “I draw and write jokes for a living.” It’s certainly depressing, though, to know how sexism, however casual, is found at the highest levels of a particular creative field.

When discussing her story in The Big Feminist BUT, Denson said, “I consider it a rant comic, even though it’s cheerful.” Indeed, her story is bittersweet because she is living the baby-free married life she wants but must contend with others expressing different expectations for her—and for all women in general, one would assume. Confronted with the incessant stream of articles about age and fertility, Denson boldly proclaimed, “Mind your own business!” The baby-loving Weinstein disagreed with Denson’s position. “My stance is that everyone should have kids,” she laughed. “When I saw Abby’s comic, I looked down on her.” Weinstein’s comment was, of course, good natured and tongue-in-cheek. She continued about how child raising affects her artistic production: time and money must be watched as closely as the baby is, but having grandma nearby has helped tremendously. 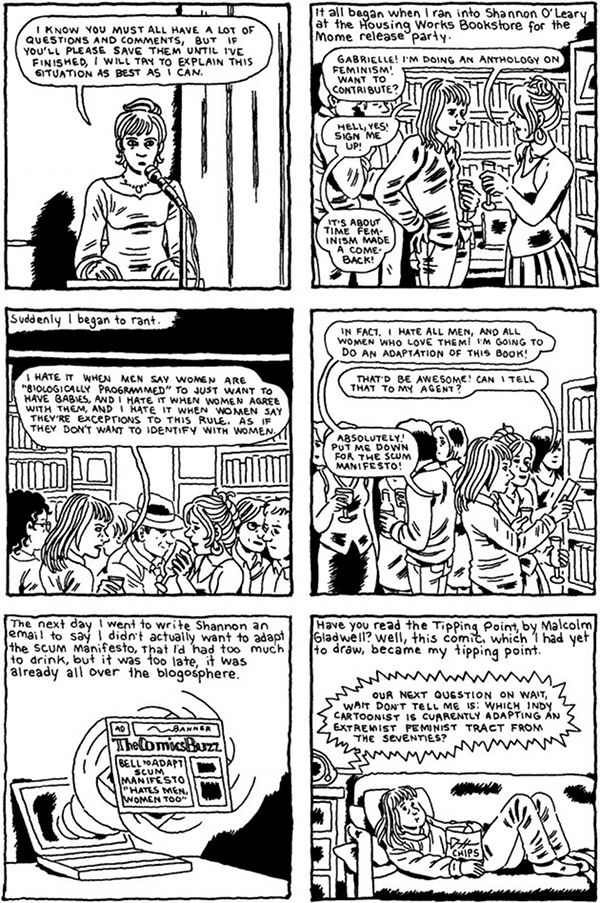 Taking up Flake’s observation, Neufeld asked, “How do we get past the adjective ‘female’ in ‘female cartoonist’?” Denson offered hope, saying that progress is made as the number of comics artists increase. What are the alternatives, she pondered, other than writing under an alias, changing your name, or wearing a paper bag over your heads? Flake agreed that “it slowly gets better and better” but cautioned against internalizing a “woman first” identity construction. Early in her career, Weinstein did plenty of work for publications in which the readers did not know her sex, but Bell remarked that male-centric expectations hover over the profession: “it’s still jarring to do [comics] work as a woman.” Wilson argued that the female experience can be understood as a central, universal human experience, though she does not overlook the present economic realities of women.

MacDonald turned an audience question about inspiration and courage into a query about each panelist’s heroes, an apt term given the medium. Bell said that Aline Kominsky-Crumb—a cartoonist who happens to be married to the legendary Robert Crumb—creates deep, complex stories that are also raw and dirty. Weinstein admires the painter Alice Neel and the cartoonist Ulli Lust, who is included in the book. Flake likes the cartoonist and graphic novelist Lynda Barry as well as the magazine National Lampoon in the 1970s, especially a series called Trots and Bonnie by the “woefully underappreciated” Shary Flenniken. Wilson admired the writers Jennifer Egan and Toni Morrison; in the comics world, the 1990s work of Jessica Abel and Megan Kelso captivates her.

Bell was excited about the book’s focus: “We’re often asked to be in female comic anthologies, but not a feminist anthology.” For Weinstein, The Big Feminist BUT was a great space in which to say what she wanted. Neufeld advocated a sequel: “It’s time for another one.”

Soundcloud hosts streaming audio of Lauren Weinstein reading her story, which can be heard in the first six minutes.