May 29, 2013 By Christopher Howard
PanelsScreenings 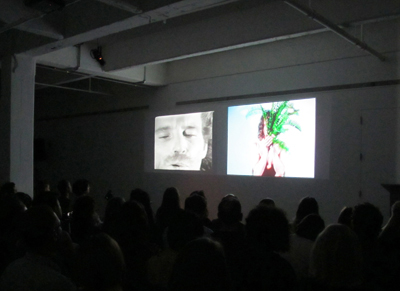 View of the dual-projection screening (photograph by Christopher Howard)

For “Dennis Oppenheim: Form – Energy – Concept,” Electronic Arts Intermix offered a special program of films from the early 1970s: selections from the artist’s Aspen Projects (1970–71), the rarely screened Disappear (1972), and two of his 2-Stage Transfer Drawings (both 1971). Transferred to DVD, the films were presented as double projections, as Dennis Oppenheim (1938–2011) was said to have exhibited his films and videos in this way. Though the New York–based Oppenheim was a pioneer of body art at the time, he has been long overshadowed by his friend Vito Acconci, whose pervy performances, along with those by VALIE EXPORT and the duo of Marina Abromović and Ulay, have come to dominate the expanded genre.

The evening’s moderator, Jenny Jaskey, assistant curator for the Artist’s Institute at Hunter College, prefaced the screening by expressing her interest in “flat ontologies” and “pressure points in contemporary art,” the latter phrase alluding to the air-pressure hose Oppenheim turned on his face and hands for two films. For her, the concepts of subject and object in the artist’s work from this period are entangled.

After about a half hour of intense filmic imagery—in which Oppenheim dug his thumbnail into wooden floorboards, shook his hands violently, and used a blowtorch to melt a wax peg leg worn by an amputee—Jaskey marshaled three New York–based visual and performing artists to “reflect on Oppenheim’s legacy and discuss the body’s relationship with the inanimate and nonhuman in contemporary practice,” according to the EAI news release. The panelists: A. K. Burns makes videos, coedits the magazine Randy, and helped to found the advocacy group Working Artists for a Greater Economy (W.A.G.E.); Yve Laris Cohen is an interdisciplinary artist whose work involves elements of dance and performance; and Ajay Kurian is an artist, a writer, and the founder for Gresham’s Ghost, a roving curatorial space. 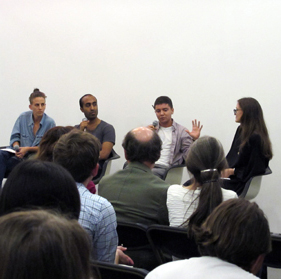 During the conversation, it wasn’t clear if the elder artist had directly influenced the younger ones. No one claimed how he or she had encountered Oppenheim’s work as an undergrad, for example, and been blown away by it. In fact, the discussion among the four speakers floated abstractly, lacking a clear narrative or concrete examples of aesthetic insight. Jaskey started off with the duality of subject and object. Burns talked about cyborgs, touch screens, feminist and queer politics, the collapse of language in relation to the body, and webs and networks that eclipse hierarchies. Kurian reframed “performance” as “activity,” observed that a private moment can be a shared sensation, and noted the uncanny relationship to your own body as you touch your face. Laris Cohen was excited about expansiveness without limits or parameters.

Burns believed that Oppenheim wanted to deny the medium of the camera in favor of the body, noting that “the frame is really heavy in that gesture.” Someone then asked, how does a language develop from the frame? Jaskey had strong feelings about Disappear but didn’t share them: “It’s an open question,” she said. Burns offered incomplete thoughts about YouTube, which Jaskey said is a medium that is weirdly private but also public. Burns grasped that the word “manual” was the root word for “hand,” to which Laris Cohen curiously responded by saying the hand is important to queerness, especially with its use to fuck. For her, Disappear is about amputation, displacement, and shame. Echoing Burns, Kurian claimed that Oppenheim wanted to destroy visual qualities, which Jaskey called a disavowal of representation. 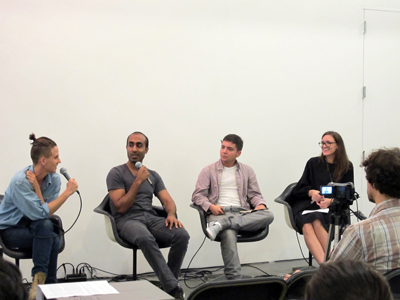 From left: A. K. Burns and Ajay Kurian discuss the work of Dennis Oppenheim, while Yve Laris Cohen and Jenny Jaskey observe (photograph by Christopher Howard)

While Jaskey may have recognized qualities of Oppenheim’s work from the early 1970s in the activities of Burns, Laris Cohen, and Kurian, those ideas could be better expressed in an essay or an exhibition, not via a live format in which artists are asked to respond to another artist’s work with which they might not be familiar. I can detect similarities between Oppenheim’s treatment of his body on camera in Nail Sharpening (1970) and Material Interchange (1970) with Burn’s Touch Parade (crush) (2011), in which two feet, clad in white Keds, casually step on and crush three baby carrots, a cucumber, and two chicken eggs. Direct comparisons between the work of Oppenheim and that of the panelists were not made during the conversation, though I acknowledge that the notion—not of influence but of unintended correspondences in approach or process—is a sensitive subject for artists.