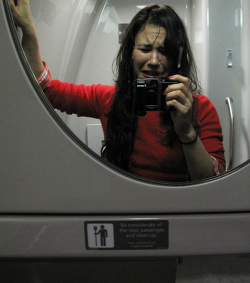 Laurel Nakadate’s presentation, a standard chronological overview of her body of work, at New York University was surprisingly underwhelming. Apparently she’s much less provocative in person, which belies the passionate and polarizing dialogue surrounding her work. Is it because the Lolita-tinged, narcissistic scenarios in her photography and video have become thoroughly embraced by mainstream culture? What about the elevation of everyday activities long fetishized by artists that is ubiquitously and glamorously expressed in Instagram, Vine, Snapchat, Facebook, Twitter, and the like?

Nakadate’s work was once forward thinking and eerily prescient: her breakthrough videos from ca. 2000 were made years before YouTube was invented and seem not only to anticipate viral videos on that platform but also comment on them. Now she borrows from forms popularized elsewhere. For example, she claimed that in 2010 she “got really interested in the selfie … in picking apart the selfie.” Throughout her lecture, Nakadate kept referring to her oeuvre—and in particular the 2011 series 365 Days: A Catalogue of Tears, in which she photographed herself crying every day (sometimes in a mirror, other times with a timer) for a full calendar year—as selfies. The artist seemed to be unaware that an intractable aspect of the selfie, a term she did not use in published interviews associated with Only the Lonely, her retrospective at MoMA PS1 in 2011, is that this kind of photograph must be not only taken with a digital camera but also readily circulated online, usually via mobile devices, social media, and websites.

There’s no doubt the images in 365 Days relate to the cult of selfies, to the “gratuitous mirror shot” that blew up on MySpace in the mid-2000s. As the story goes, Nakadate initiated her project in response to the perceived happiness of people on social media, smiling for the cameras and looking happy, even though she knew her friends were sad. Nakadate was right in that people often present themselves positively, with the good moments in life shown to the world in either a photo album in decades past or today through Flickr or Instagram. She explained in 2011, “I was playing off the idea of narcissism in self-portraiture in contemporary times, with the iPhone at arm’s length. We’re all sort of narcissists now.”1 But, as I mentioned before, her photographs are not technically selfies. In other words, she didn’t distribute the photographs of private moments that she captured on an expensive digital camera via an online network; instead they appeared as enlarged and framed prints in museums and commercial galleries and will also be collected in a book. For Nakadate to claim the selfie retroactively as the focus of her project is disingenuous and even demeans her work, because she positions herself as a follower of trends instead of anticipating them. She’s retroactively applying the term to a project that doesn’t quite meet the requirements of the genre for the sake of appearing trendy.

Nakadate admitted that 365 Days was “a really bad idea, actually” (no kidding) and that she had wanted to give up the project in June or July 2010. “But that,” she assured herself, “would be pathetic.” Nakadate said she actually became despondent toward the end of the year, “sad the ritual was ending, the way [the sadness] keeps you company.” Or, as Kurt Cobain once sang, “I miss the comfort in being sad.” 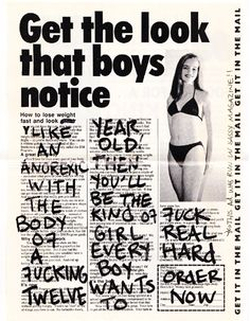 Image from a Riot Grrrl zine or flyer

A second point of irritation was Nakadate’s casual references to and alignment with Riot Grrrl, a feminist punk movement from the early 1990s. At the beginning of her talk, when showing her photography from her undergraduate days, she claimed to have attended college (at the School of the Museum of Fine Arts, Boston, and Tufts University from the mid- to late 1990s) during the height of Riot Grrrl, which, according to Sara Marcus’s book Girls to the Front, largely took place between 1990 and 1992. Later, during the Q&A, an audience member asked Nakadate to characterize her feminism then versus now. In the nineties, the artist replied, she and her peers felt that music and art could change the world, and that women could freely show their bodies. The “embarrassing Ani DiFranco thing meant something,” she reminisced. “I really believed in it.” The differences among performers such as DiFranco, Bikini Kill, PJ Harvey, Tori Amos, Jewel, and Alanis Morrisette seemed unclear to Nakadate—you can’t lump them into the same category. Maybe you can now, but twenty years ago you couldn’t.

Anyway, in college Nakadate took 35mm photographs of student partiers, many from private, affluent New England colleges, “talking myself into a world that I don’t understand.” A form of transportation called the Fuck Truck, she said, brought male students from Harvard University to party with women at nearby Wellesley College. On the screen beside her the artist projected photographs of a naked party at a feminist co-op, where a nude professor was drawing on an unclothed student with a marker. “I’m sure these women are [now] lawyers,” she said. “I could never get release forms now” to display the photographs publicly. 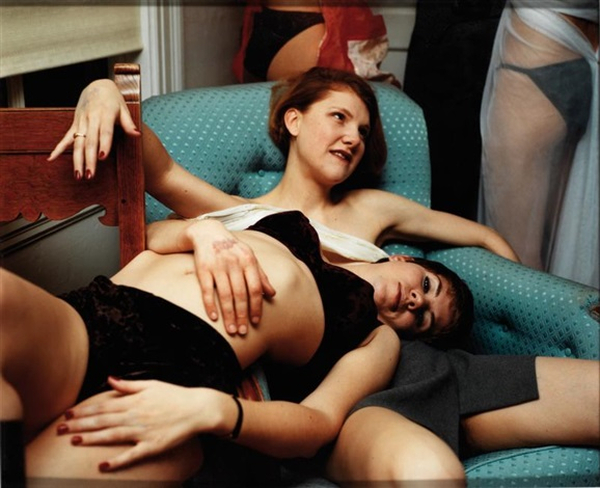 Nakadate’s talk had great moments, particularly when she offered details about her work that you might not get elsewhere. Nakadate said she pretended to have sex with an imaginary boyfriend in her Love Hotel video (2005), which she filmed in short-stay accommodations in Japan—the kind you pay by the hour. She had also been thinking about a scene in a Nightmare on Elm Street film in which an invisible Freddy Krueger threw a person against a wall. She learned later that surveillance cameras are installed in every room at the hotel—and that they also lock the doors from the outside during a couple’s stay. Nakadate joked that a better video of Love Hotel is probably circulating in Japanese jerk-off parlors.

We also received dull interpretations of Nakadate’s work from the artist, so my mind wandered. I wondered if the artist for whom she modeled in her video Lessons 1–10 (2001) has ever shown his drawings of a skimpy Nakadate publicly. She said that she made another work, Trouble Ahead, Trouble Behind (2005), during a road trip in which shed explore the world to find herself and to create self-portraits. “I got really tired of being in the videos,” she sighed, so for this work she threw her underwear from a moving train. “The project was about photography and movement for me,” she said. I wanted to ask her if the commercial transaction of buying bras and panties every day was part of the work but thought better of it. Nakadate considered Trouble Ahead, Trouble Behind to be a performance even though she traveled alone. “I don’t think you have to have an audience,” she said, “for it to be a performance.” 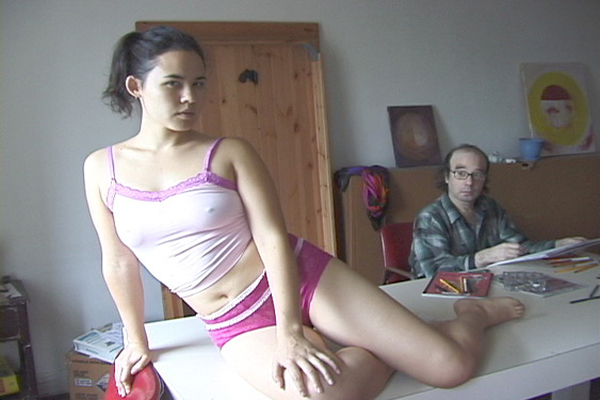 Nakadate talked a great deal about failure—another trite idea in the art world—by discussing the hardships in casting, budgeting, and filming that she encountered when working on her two feature-length videos. She also talked in detail about a recent series of photographs in which she does not appear, which were shown in an exhibition called Strangers and Relations at Leslie Tonkonow Gallery earlier this year. Nakadate’s plan was to meets strangers in places such as Arizona, Texas, and California in the darkness of midnight and takes a long-exposure photograph using only a flashlight to illuminate the subject. Even though Nakadate had only first seen these people at that moment, she told us her subjects felt comfortable enough in the dark to tell their secrets to her. Does anyone ever photograph a person upon first meeting them? That never happens, but often people see photographs of others before meeting them—that’s the crux of online dating, Nakadate feels is way more dangerous, especially when you go to a stranger’s house to have drinks. When Nakadate was twenty-five, she didn’t go home with guys she met at bars. But she did go home with pathetic strange older single men to film videos of her dancing with them to Britney Spears songs.

The Q&A session was tame, which either meats the audience was too intimidated to ask hard questions (unlikely) or that Nakadate’s work is now no big deal. An audience member asked her when a project ends. “When I lose interest,” she replied. It’s “not really a mature way of working.” Someone else asked if she was really sad when she was crying. “Yes and no.” Nakadate told us that she listened to certain kinds of music or watch television shows that could help induce tears. She also refrained from posting selfies on Facebook during the run of her project—what Herculean strength!

Someone asked if she prefers to direct or to perform. It’s “easier not being naked,” Nakadate said. She may return to selfies, believing “We can provoke in different ways that aren’t sexual that can be provocative.” An awkward Asian man in the audience, probably in his twenties or early thirties, could not stop commenting on Nakadate’s physical appearance in her photographs: “You look very infantile. You look Latin. You look like a normal person.” The artist admitted that she is young and racially ambiguous: “It’s the only character I have.” This response made the creepy Asian man comment on Cindy Sherman’s “horror of aging” in her recent work, which depicts the artist as elderly women. Nakadate thought these images demonstrated Sherman’s “vulnerability” and her persistence as an artist. Nakadate is a true believer of her work.