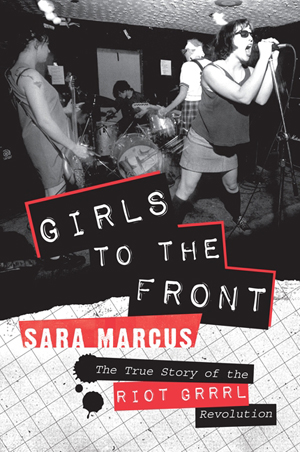 My writing the first essay on Riot Grrrls may seem amiss for a new publication devoted to discourse on modern and contemporary art, but considering that a passion in music preceded my interest for art by a year or two—and also that it developed much more rapidly from ages fourteen to twenty-four—the topic fits. Besides, a nonfiction forum at the New School on Sara Marcus’s Girls to the Front: The True Story of the Riot Grrrl Revolution (2010) led off the fall calendar for In Terms Of.

That I devoured Marcus’s book over Labor Day weekend, finishing it within twenty-four hours in two sittings, is a testament to how effortlessly, how naturally, she has presented five long, arduous years of research and writing, while earning a master of fine arts degree in creative writing from Columbia University along the way. Her outstanding chronicle of this relatively undocumented underground cultural phenomenon—an early 1990s movement of newly empowered American teenagers and young women who formed bands, published zines, and united disparate scenes across the country, from Olympia, Washington, to Washington, DC—was something I didn’t know I needed to read but am glad I did.

After a dozen or so pages, I realized how little I knew about Riot Grrrl history, its people, and the music. Well, I knew some of the music, having owned Bikini Kill’s Pussy Whipped (1993) and occasionally spinning a seven-inch record by Bratmobile or Tsunami from my brother’s collection. The movement didn’t seem to have reached Florida, apart from well-stocked records stores in Orlando and Gainesville. The primary bands rarely if ever toured the state, which had a strong bro-heavy punk and hardcore scene. I was barely conversant at the time and, anyway, much preferred PJ Harvey, the Raincoats, and God Is My Co-Pilot to any group in the Riot Grrrl canon.

After a brief introduction by Robert Polito, director of the School of Writing, Marcus read nearly all of her book’s prologue, “Mass Movement,” which merges descriptions of a Bikini Kill show in the nation’s capital on April 4, 1992 (opening for Fugazi) with a chronicle of the We Won’t Go Back March for Women’s Lives, the “largest women’s rights demonstration in American history” held the next day. Numerous Riot Grrrls marched alongside the heroes and veterans from the heyday of women’s lib. Marcus said she based her accounts on period video in archives and on YouTube, yet she did this so vividly that three women in the New School audience thought the author had been on the ground with them nearly twenty years earlier—she attended neither the concert nor the march. It’s hard to believe that two decades separates 1971 and 1991, as well as 1991 and 2011. A few members of the audience, which numbered about twenty-five, were likely wearing diapers when Bikini Kill was touring. I’m an oldster now. 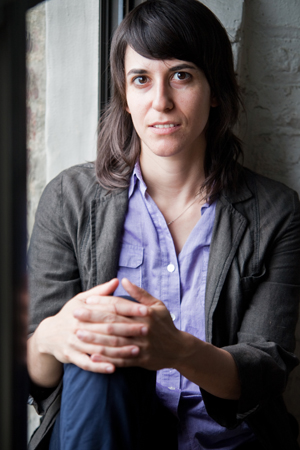 Marcus’s enthralling combination of reportage and dramatic re-creation—“novelistic” in her words—is what makes the book so gripping. In fact, Allison Wolfe, the lead screamer for Bratmobile, admitted as much in her New York Press book review, “It can be emotional and confusing to read about yourself and major events in your life by someone who wasn’t entirely there and posits it back in third person print as fact. In many ways, Marcus nails it.” Yet Wolfe wonders, “can this type of rendition ever be quite right?” (A review in Bookforum by Johanna Fateman, another former Riot Grrrl, is also worth a look.) Marcus’s approach reminds me of the rock ‘n’ roll biographies I read as a teenager—such as No One Here Gets Out Alive (1980), on Jim Morrison, and Hammer of the Gods (1985), on Led Zeppelin—which had pages of direct quotes and conversations presented to the reader as if transcribed from a magical backstage tape recorder. I don’t think Marcus uses this fraught literary device; her quotes largely come from interviews, video, letters, and other forms of solid documentation.

During the New School reading, Marcus performed herself, shouting Bikini Kill lyrics in Kathleen Hanna’s annoying monotone and reenacting rants from audience members who jumped onstage and grabbed a microphone to speak out. It was a great example of how Riot Grrls injected bravado, energy, and spunk into the complacent feminism of aging hippies and dog-eared left-wingers. It’s not entirely unironic that the first wave of punk had rebelled against the same counterculture, the same people, in the late 1970s. If the newer generation of punks (ca. 1991) invented their own politics, it was because the old guard (Gloria Steinham, Jane Fonda, Andrea Dworkin) was nearly exhausted, out of touch, or just plain irrelevant to the dissatisfied youth. A case in point: during the Q&A with Polito, Marcus said that her research uncovered an interesting, little-known fact, that the National Organization for Women had hired consultants to assess the 1992 march. Their conclusion? NOW’s media policy left much to be desired. The Riot Grrrls had their own troubles with the press, imposing a media blackout when journalists from mainstream newspapers and magazine began calling them, wanting the inside scoop on not only the music but also the scene, which often involved deeply personal, tear-jerking conversations in weekly group meetings. (What would your therapist say about you if Newsweek inquired?) In a largely decentralized movement in which the collective noun Grrrls stubbornly resisted becoming an –ism, the ban was impossible to maintain—the plan backfired.

Marcus said her editors wanted to narrow the book’s scope to four main characters. While Hanna was “one of the original intellectual architects” of the movement and looms large in the finished work, the author juggled about a dozen regulars and organized her material spatially (i.e., geographically) and chronologically. Regarding the latter, the author reminded the audience that long-distance calls were expensive back then and that girls could expect two weeks or more to pass before receiving a response when sending letters and zines cross-country. (Photocopies and stamps weren’t cheap either, but the enterprising grrrls easily overcame these obstacles.) Despite these restrictions, Riot Grrrl flourished rapidly but burned out just as quickly, the movement’s core lasting only about two years. Even then they produced a lot of creative activity. Marcus worked with a lot of this visual material, though only twenty images found their way into print—strictly a budget issue, she told me in the Q&A.

Polito asked Marcus about models for her project, which she excitedly jumped on after a rock critic who had a book contract on the subject abandoned it. Right away she named David Hadju’s Positively 4th Street: The Lives and Times of Joan Baez, Bob Dylan, Mimi Baez Fariña, and Richard Fariña (2001) as a major influence. Herman Melville’s Moby Dick (1851) also sprang up for its strong storytelling, as well as Nick Flynn’s Another Bullshit Night in Suck City (2004).

Even though Marcus works for Artforum, she doesn’t bring the art world into her narrative. The Guerrilla Girls would have been a parallel worth mentioning, as well as Kim Gordon of Sonic Youth, a hero to many young feminists at the time. Likewise I don’t recall the contemporaneous film Thelma and Louise (1991) mentioned in the book. An audience member asked if a Riot Grrrl revival was underway, but other than karaoke performances Marcus was unaware of such activity. The questioner then offered the Brooklyn band (or collective) Permanent Wave as a successor—or at least as a group keeping the old spirit alive. Here I would have expected a discussion on how mainstream performers, from the Spice Girls and Lady Gaga to the lesser-known Peaches to M.I.A., have co-opted or used “girl power” in various or nefarious ways, but that thought would have to wait. To end the forum on a high note, a young woman in the audience, probably a New School undergraduate, said that Marcus’s book was the one thing that “made me give a shit about feminism.” Welcome to the liberation front.