This essay is the second of two that reviews a panel on art criticism at the New School for Social Research in 1979. Read the first text. 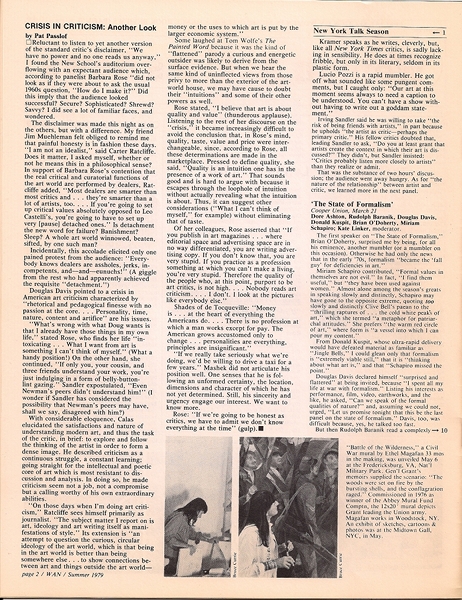 Anticipating yet another version of the standard critic’s disclaimer, “We have no power and no one reads us, anyway,” I found the New School’s auditorium overflowing with an expectant audience, which, as Barbara Rose put it, did not look “as if they were about to ask the usual 1960s question, ‘How do I make it?’” Did this imply that the audience looked successful? Secure? Sophisticated? Shrewd? Savvy? I did see a lot of familiar faces.

The expected disclaimer was indeed made, but with a difference. My friend Jim Muehleman reminded me that painful honesty is in fashion these days.

Carter Ratcliff said, “I am not an idealist,” and supported Barbara Rose’s contention that the real critical and curatorial functions of the art world are now performed by dealers. In his opinion, “Most dealers are smarter than most critics and … they’re smarter than a lot of artists, too.” Moreover, “If you’re going to set up critical values absolutely opposed to Leo Castelli’s, you’re going to have to set up [pause] very detached ones.” Is detachment the new word for failure? Banishment? Sleep? A whole art world winnowed, beaten, sifted, by one such man?

Incidentally, this accolade elicited only one pained protest from the audience: “Everybody knows dealers are ass holes, jerks, incompetents, and … eunuchs!” (A giggle from the rest who had apparently achieved the requisite “detachment.”)

Douglas Davis found a crisis in American art criticism characterized by “rhetorical and pedagogical finesse with no passion at the core.” His own concerns are personality, time, nature, content, and artifice.”

“What’s wrong with what Doug wants in art is that I already have those things in my own life,” said Rose, who added that she finds her life “intoxicating.” What she wants from art is “something I can’t think of myself.” On the other hand, “If only you, your cousin, and three friends understand your work, you’re just engaging in a form of belly-button-lint gazing.” Irving Sandler protested: “Even [Barnett] Newman’s peers didn’t understand him!” (I wonder if Sandler has considered that maybe Newman’s peers simply disagreed with him.)

As for criticism, Nicolas Calas elucidated the nature and satisfactions of understanding modern art with great eloquence. The task of the critic, as he sees it, is to “explore and follow the thinking of the artist in order to form a dense image.” For Calas, criticism is a continuous struggle and constant learning. It means reaching directly for the intellectual and poetic core of art—what is most resistant to discussion and analysis. His description made criticism seem, not a job, or a compromise, but a calling worthy of his own extraordinary abilities.

Carter Ratcliff, on the other hand, said that on those days when he’s “doing art criticism,” he sees himself primarily as a journalist. “The subject matter I report on is art, ideology, and art writing itself as manifestations of style.” By extension, there is “an attempt to question the curious, circular ideology of the art world, which is that being in the art world is better than being somewhere else.” Ratcliff intends also to “show connections between art and things outside the art world—money or the uses to which art is put by the larger economic system.” 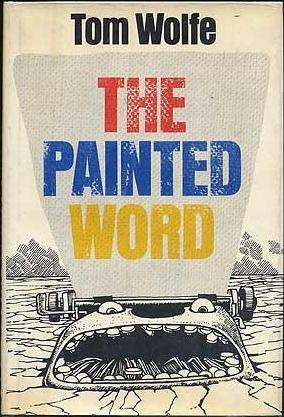 Tom Wolfe’s The Painted Word was ridiculed by art worlders because it was the kind of flattened parody a curious and energetic outsider would derive from surface evidence. But, hearing the same kind of uninflected views from those knowledgeable about more than the exterior of the art world, we may doubt their “intuitions”—and some of their other powers as well.

When Barbara Rose said, “I believe that art is about quality and value,” she was thunderously applauded. But the rest of her discourse on the “crisis” suggested that she finds quality, taste, value, and price interchangeable, as she finds all these determinations are made in the marketplace. Pressed to define quality, she offered, “Quality is an intuition one has in the presence of a work of art.” That sounds good and is hard to argue with because it escapes through the loophole of intuition, without actually revealing what the intuition is about. Thus it can suggest other considerations (“What I can’t think of myself.” for example) without eliminating taste.

As for her colleagues, Rose announced, “If you publish in art magazines … where editorial space and advertising space are in no way differentiated, you are writing advertising copy. If you don’t know that, you are very stupid. If you practice as a profession something at which you can’t make a living, you’re very stupid. Therefore the quality of the people who, at this point, purport to be art critics, is not high…. Nobody reads art criticism…. I don’t. I look at the pictures like everybody else.”

Joseph Masheck disagreed: “If we really take seriously what we’re doing, we’d be willing to drive a taxi for a few years.” Unfortunately, he did not articulate this position well. One senses that he is following an unformed certainty, the dimensions and character of which he has not yet determined. Still, his sincerity and urgency engage our interest. We want to know more.

Rose again: “If we’re going to be honest as critics, we have to admit we don’t know everything at the time.”

Written by Pat Pasloff, “Crisis in Criticism: Another Look” was originally published in Women Artists News 5, no. 2–3 (June/Summer 1979): 2; and reprinted in Judy Seigel, ed., Mutiny and the Mainstream: Talk That Changed Art, 1975–1990 (New York: Midmarch Arts Press, 1992), 127–28. In Terms Of thanks Midmarch Arts Press for permission to republish this review.