Say You, Say Me: Art Is a Song in Your Head—Rachel Harrison in Conversation with Greil Marcus
Thursday, October 29, 2015
Center for the Humanities, Graduate Center, City University of New York, Martin E. Segal Theatre, New York 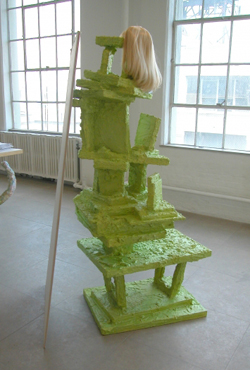 “Language is forced on art,” quipped the artist Rachel Harrison to an audience member during the Q&A session of this event. “We’re just throwing words at art all the time. Is that really best for art? Is that really good for art? Does that make art happy? It might. It employs a lot of people.” Such is Harrison’s self-consciously funny and cynicism-free outlook for giving titles to her works. That outlook is also a good way to understand her art practice over the last twenty years. I lost track of how many times I chuckled to myself during this hour-long talk.

Harrison attached funny stories to a few of her works. A gallery goer stole a Baby Phat handbag fastened to one sculpture, and friends told her that someone had ruffled the blonde wig topping another. “What is that desire, not to mess with hair but to mess with artworks?” Harrison asked during her lecture. “Because I get that sometimes.” The way Harrison recounted taking the photograph she uses for Marilyn with Wall (2004–ongoing) characterized an Andy Warhol museum archivist as a sketchy street drug dealer.1 Yet irony plays no role in her practice: “I work too hard to be ironic,” she told another attendee.

Harrison’s art practice is varied: mostly sculpture and installation but also photography, drawing, and writing. (Artforum has published a few great articles by her, on Andy Warhol’s Empire, Jeff Koons’s Bob Hope, and a parade organized by Paul McCarthy.) She isn’t yet known for a singular masterpiece, for which she could be inextricably linked, but her style is recognizable a mile away. A typical work is larger-than-life-sized, built from construction materials or polystyrene and slathered with cement and paint, with an extra prop or two—a bottle of Mr. Clean, a plastic figurine, or a framed photograph of a celebrity—fastened to it. Sometimes a sculpture rests on a plinth, a pair of milk crates, or a shipping dolly. 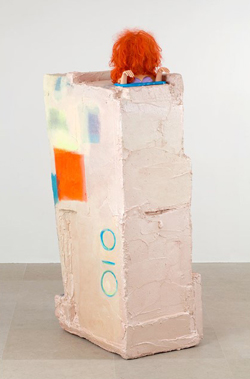 Tonight’s event paired Harrison with the music critic Greil Marcus, best known for writing the books Mystery Train (1975) and Lipstick Traces (1989). Marcus was funny, too, in his own way, as he read aloud a short introductory essay peppered with off-the-cuff observations. While in Paris, he visited an art exhibition at the Fondation Louis Vuitton, a Frank Gehry–designed building in Paris that “from the outside looks like a spaceship just about to take off.” Marcus circled Harrison’s Zombie Rothko (2011) round and round, taking in the bright orange hair of a plastic doll torso placed on the top of a craggy, painted blocky form. “What first might bring a laugh might turn disturbing,” he surmised. “What first might just throw you and not seem to hit is going to end up being the governing principle of the work.” And considering the ways she infuses pop culture—in particular a series of twenty colored-pencil drawings of the British singer Amy Winehouse carousing with characters from paintings by Pablo Picasso, Willem de Kooning, and Martin Kippenberger—he argued, “Not enough has been made of the way that Rachel’s work engages with the world that people actually live in…. That when you see it you’re seeing a distorted, funnier, more gripping version of the life that you actually lead.”

I am embarrassingly late to the Rachel Harrison party. My longstanding impression of her work was that the criticality vibe overpowers all other interpretations, including humor, which I certainly noticed but didn’t take seriously. After all, Greene Naftali, her gallery of eighteen years, shows Very Serious Art by Paul Chan, Michael Krebber, Bernadette Corporation, and others. Over the years I have dutifully seen Harrison’s head-scratching exhibitions—at Greene Naftali, in the Whitney Biennial, at the New Museum—but never considered it in depth, despite my editing an exhibition review of her work in 2005. For years I recognized the work’s shock value—you could never call it beautiful—but never acknowledged its smart value and its terrific sense of humor. To get a better sense of what her work is all about—this is the primary reason why I attended tonight’s event. 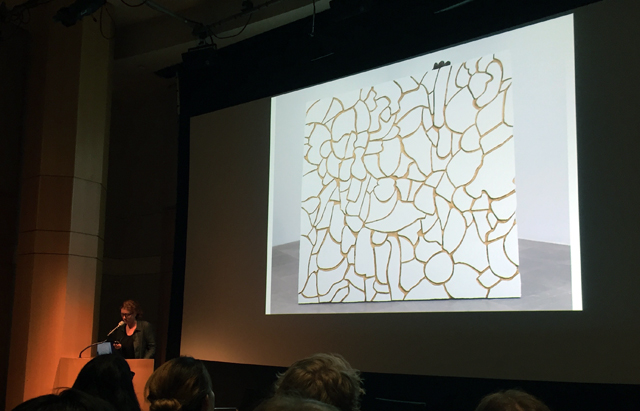 In a chronological artist’s talk, Harrison presented two principle themes in her work—walls and frames—and how her thinking has has shifted from the former to the latter. Indeed, since the early 1990s she has made use of Sheetrock and metal studs brought into the gallery or taken down existing gallery walls (but never removing them from the exhibition space). The title of Harrison’s first solo exhibition—Should home windows or shutters be required to withstand a direct hit from an eight-foot-long two-by-four shot from a cannon at 34 miles an hour, without creating a hole big enough to let through a three-inch sphere?—came from a New York Times article on building codes after Hurricane Andrew; the show took place in an apartment in Carroll Gardens, Brooklyn.

Developing this interest in modular and provisional work, the artist filled a gallery with a maze constructed with rectangular sheets of cardboard (Perth Amboy, 2001). “People call this a labyrinth, but you’re not going to get lost,” she joked. For Marilyn with Wall, Harrison took down nonstructural gallery walls and set them aside. “You make more space by cutting up a wall, and you make more space for a body,” she explained, sort of. “And by having more bodies you can have more spaces.” She metaphorically attributes physical space to mental space and to thinking. Harrison notices how people walk through rooms and on the subway—she may be watching you. 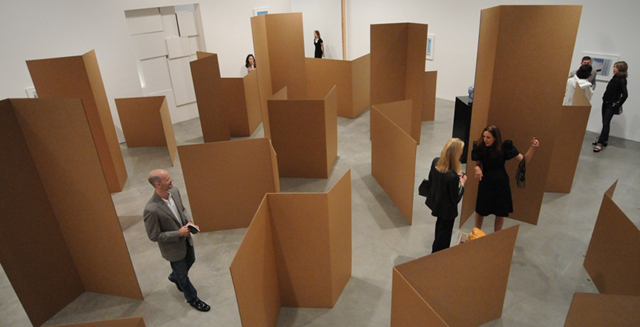 After discussing a handful of museum and gallery exhibitions across Europe, Harrison tackled Three Young Framers, a solo outing at Regen Projects in Los Angeles this past summer. With wall studs leftover from shows by Glenn Ligon and Raymond Pettibon, which the gallery saved for her, she demarcated rooms within the hangerlike building, not unlike Michael Asher’s 2008 show at the Santa Monica Museum of Art. Although her initial idea came from drawing outlines of the gallery’s floor plan on paper, using a ruler, Harrison confessed that she wanted to see the Asher exhibition again, and this was a way to do it. She finds sophisticated humor in his work, from the George Washington statue to the Santa Monica show.

During the conversation, Marcus saw “a scary, lifeless, maximum-security prison” in Three Young Framers, not a reference to Asher (who he may not know). No reviews of the show mentioned the prison angle, which Harrison chalked up to the herd mentality of art criticism. If the press release had mentioned jail, she noted, everyone would have zeroed in on that instead of Asher. There is no single meaning in your work, Marcus continued, adding something about how taking selfies imprisons actually imprisons the vain photographers. “Where they are,” he said, “is much less important than the fact that they are there.” Or maybe people just like documenting their life in photographs, like they’ve done for decades.

Harrison’s 2012 exhibition The Help comprised a handful of sculptures and the Amy Winehouse drawings, which Marcus found to be upsetting and nihilistic, distorted and angry, bitter and self-destructive. Seeing the pictures changed the way he perceives the British singer, who died of drug and alcohol–related causes in 2011. Harrison appreciates her music but did not previously follow her career. The subject of the drawings was chosen randomly, she said, from a magazine cover spotted in a supermarket checkout line—though celebrities certainly play an important role in her work. Harrison admires the way Winehouse turned herself into sculpture, into a pop icon, purely through invention: her hair, singing soul music, and having working-class origins. What if someone looking at the drawings knows very little about Winehouse? If one puts the singer in the wrong place, Harrison and Marcus concluded, we can rethink her career and how she got there instead of repeating platitudes. 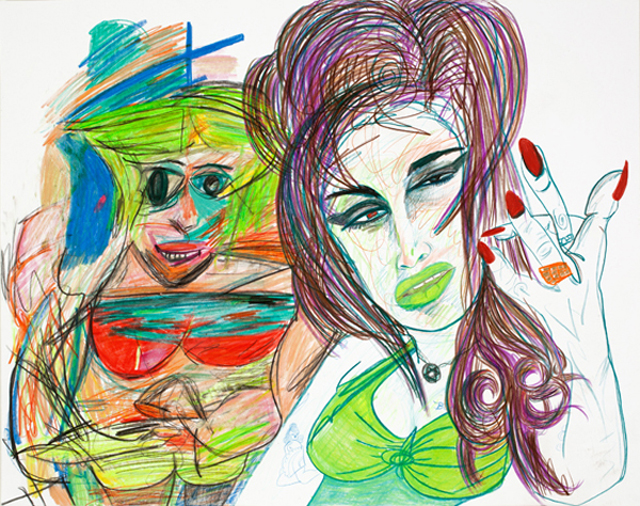 Marcus saw the “scrapbook” exhibition Amy Winehouse: A Family Portrait at the Contemporary Jewish Museum of San Francisco, which he did not find terribly interesting. Three artists (Harrison, Jennie Ottinger, and Jason Jägel) had work at the same museum in a separate exhibition, called You Know I’m No Good. That presentation, which included Harrison’s Winehouse drawings, was overwrought, disturbing, violent, and mutilated, according to Marcus, not unlike the disturbing images in Robert Mapplethorpe’s X Portfolio. There is agency in creative acts, Harrison avowed. Marcus agreed, arguing that pain is an expressive force.

Another audience member—it was the art historian Hal Foster—stated that most people understand Harrison’s work as collage and assemblage. He articulated a different perspective: “You don’t collage things; you collage views, viewpoints. It’s about putting subjects together, not objects together.” Although the same could be said for many artists, his observation is spot on. Harrison seemed pleased with it. She mentioned another description about her work, made by Foster, that she likes: “You take a bad thing and make it worse.”

1 Rachel Harrison said: “They’ll let you make an appointment, and you can go to Andy Warhol’s archives. And you just wear gloves, and they’ll let you touch everything. And there’s a can of hairspray, chewing gum, all the things you know about—fabulous things. And then I was about to leave and the guy was like, ‘Well, don’t you want to see it?’ And I said, ‘What?’ And he said ‘Everyone wants to see it.’ I’m like, ‘What do you mean?’ ‘Don’t you want to see the source material for Marilyn?’ And I’m like, ‘I don’t care.’” She ending up taking a 35mm photograph of the publicity still, partially veiled by a glassine sleeve. The image is a key part of a sculpture called Marilyn with Wall, which she has created several times since 2004.