Texting is ruining language, right? People who use LOL, cul8r, and brb have lost the ability to write formally and coherently, if they ever learned at all. Writing skills are deteriorating, and who else is to blame but the internet? What makes it all worse is that everyone is writing more today than twenty or thirty years ago, a time when civilized people sent letters instead of emails. Yet nothing about this moral panic is true—at least not yet—according to Jannis Androutsopoulos, a professor of German and media linguistics at the University of Hamburg, who gave a talk on “Scenarios and Evidence of Linguistic Change” at the New York branch of the Goethe-Institute. Nevertheless, and with a twinkle in his voice, he said, “something called the media has some mysterious effect on something called the language.”

While some folks perceive how Millennials communicate—through indecipherable internet-informed language and those silly emojis—as a decline that “threatens us as a national community,” Androutsopoulos told us that people have been alarmed over the state of language and communication for some time, noting that a 1991 study by Sigurd Wichter predicted our situation today. Technological determinism such as autocomplete may force people to use language in certain ways, but what is the long-lasting impact? Because the internet is still relatively new, Androutsopoulos said, linguists cannot agree if “fuzzy and indeterminate” shifts in communication will turn out to be systemic changes. Thus blanket statements like those above cannot be validated by social science. To present his arguments, he introduced two current schools of thought: “system and features” and “repertoires and practices.” 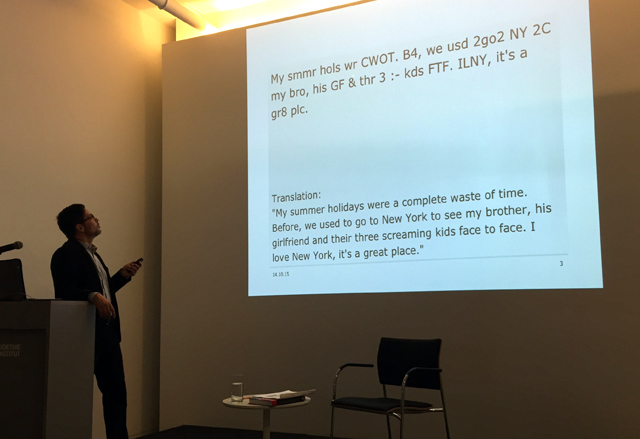 The spelling of words is shortened to simplify a message, and in German the nominatives are not capitalized; homophones such as gr8 and cu are shortened with no change in pronunciation. These changes, Androutsopoulos revealed, existed before the internet and gravitated online. Look at any high school yearbook from the 1980s and 1990s and you’ll see net neologisms handwritten all over (KIT = keep in touch). Networked writing is also marked with an informal, spoken style (hafta); using all caps identifies tone (typically a shouting one); and the appearance of multiple letters (hiiiiiiiiii) indicates prosody, which means how quickly or slowly something is said. Punctuation such as ellipses takes on multiple meanings depending on where they’re used in a piece of internet writing, and what he called the inflective alludes to bodily movements that express emotion (*doing my happy dance*). The professor’s basic descriptions of “textese” were familiar, if not banal, but they indicate how academics approach the subject.

“When do words exist?” Androutsopoulos asked. “When they are in the dictionary or when people start using them?” Linguists are interested in how new words—and new meanings for old words—enter the larger lexical sphere. Some oldies in the digital realm are download, modem, cyber, web, e-anything, hashtag, tweet, and app. More recent examples are Facebook stalking, unfriend, defriend, selfie, and (in German) entfreunden. “English-language scholars are oblivious, in a sense,” Androutsopoulos remarked, “to many important things happening in other languages.” It’s true. I had no idea that people are having serious discussions about conjugating the verb “to Google” in German. Nor did I ever think about how English-centric such phrases as “because + [noun]” can’t be translated into German, or how German verbs are now dropping their Gs. 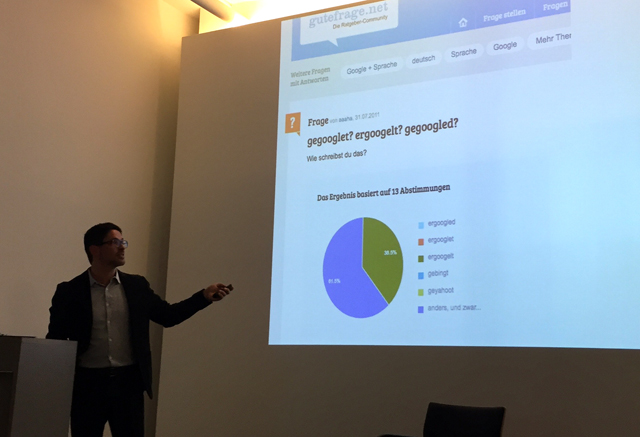 How does one conjugate the verb for “having found something out by googling” in German? (photograph by Christopher Howard)

It’s common sense that written language evolves, but only academic research can confirm what we suspect is true. The German language wasn’t standardized until the eighteenth century, Androutsopoulos said, but digital communication has begun to break down this homogenous and invariant expression. The need to keep records, transmit knowledge, and build lengthy, complete arguments still exists, but the importance of social interaction has returned through the written word, not speech. Sociological studies reveal that people develop competence in more than one way of writing, and that formal and digital language are mutually intelligible. Read through a lengthy Facebook thread or a newspaper’s comment section—both examples of what Androutsopoulos calls “unregulated writing in the public space”—and you’ll find people carrying on a coherent conversation despite flagrant mistakes in punctuation, grammar, and spelling by some, and perfect formal writing by others. As a linguist he doesn’t aim to establish a binary of right and wrong, but rather he wants to know why languages change.

What is also interesting to linguists is how tone, gesture, facial expression, prosody, and contrast appear in networked writing. To indicate expressiveness, “you need to find out ways to write it without saying it,” Androutsopoulos said. When texting, people have replaced the sentence-ending period with one or more exclamation marks, not to project enthusiasm but to avoid conveying apathy. Changes manifest is other ways. For example, in German an email begins with a salutation and ends with a farewell, but the professor’s students sometimes use greetings normally reserved for friends, families, and lovers. While Androutsopoulos claimed that a person’s writing style fits the situation, that people know how to move between the formal and informal styles, I regularly witness senior-level colleagues neglect punctuation, capitalization, spelling, and grammar all within a single two-sentence business email. But maybe that’s just carelessness, not the inability to distinguish between professional and personal contexts. 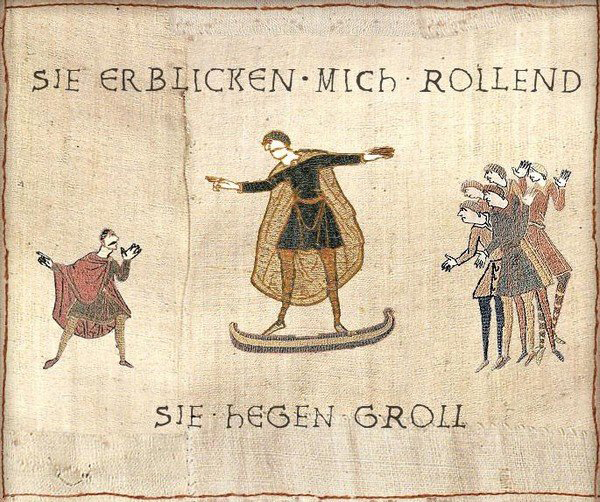 They See Me Rollin’ They Hatin’

Androutsopoulos spent some time talking about memes and image macros, such as Scumbag Steve and Bad Luck Brian, whose templates for manufacturing he called egalitarian. His specialty seems to be They See Me Rollin’ memes, Bayeux Tapestry parodies with hip-hop lyrics, and Hamburg memes with city-specific humor. The professor strangley claimed that when memes circulate, there’s no original to reference and that it doesn’t matter, but the high level of research presented by Know Your Meme and other obsessives clearly indicates otherwise. A serious analysis of memes may be a valid academic subject, but often it feels like someone explaining a joke—the experience gets ruined.

An audience member asked if differences between male and female internet writing exist. Androutsopoulos stated that girls and women write hiiiii and use smileys more than boys and men do, but it also depends if the female interlocutor is writing to a male or female. Other research, he said, shows that gender differences eventually neutralize, and that scholars try not to make essentialist definitions.

Although the claim of texting having a negative impact on formal writing has been refuted, Androutsopoulos conceded that linguists need more research and data, more fine-grain contextualization that focuses on qualitative close readings alongside quantitative statistical analyses. There is evidence for fleeting innovations, he concluded, but “it is difficult to draw the lines between innovations and change.”

In Terms Of count: 10 (including 1 on a PowerPoint slide)