Flowers and a Nasty Note

Halfway through this conversation, the New York Times art critic Roberta Smith was asked, “How do you choose what to write about?” She responded by stating that it’s the art she really likes or dislikes, no matter if the artist is super popular or under recognized. “I’m interested in the unit of a show,” she noted, yet “we’re in this post-post-post period.” Although Smith gravitates toward “rematerialized objects,” a play on Lucy R. Lippard’s famous notion, she said that “any kind of work can be made now.” This was all good news for the crowd of fifty-plus that gathered in a crit room at the New York Academy of Art, a small graduate school known for figurative and representational work. Good news not because of their adherence to centuries-long traditions—realistic portraits in oil, classical marble carving—but rather because their approach may still be relevant and of interest this deep into the twenty-first century.

Tonight’s conversation, led by the artist and faculty member Sharon Louden as part of her Professional Practices Series of guest speakers, was a live example of the articulate, informed, tough, and usually on-point analyses for which Smith is known, respected, and perhaps even loved. Sharing the chief critic position at her newspaper with Holland Cotter, Smith is among the few writers who have charted on ArtReview’s Power 100 list of influential people in the art world—she debuted at #55 in 2006 and last placed in 2010 at #80. Although it’s hard to take the magazine’s annual ranking seriously, I recall how an art dealer told me years ago that a Friday Times review from Smith never fails to get people in the gallery door on Saturday. Smith even told Louden that she wants her writing to “get you out of the house.” If that’s not influence, I don’t know what is. 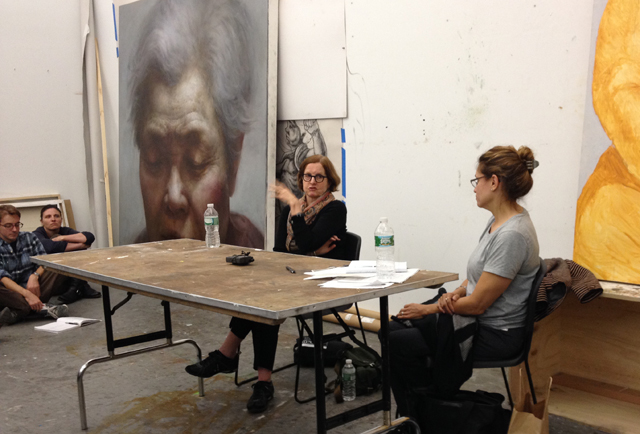 To start the conversation, Louden asked the critic about her background. Born in New York City, Smith was raised in Lawrence, Kansas, and attended Grinnell College in Iowa before participating in the nascent Whitney Independent Study Program in 1969, which was originally designed for undergraduate students who did not live in New York. After the Whitney program she worked for Donald Judd and then for the Museum of Modern Art before venturing into criticism, writing first for Artforum. Several of Smith’s early remarks—on mistaking content for subject matter, her goal of writing criticism as her primary activity, and “staying fresh” to avoid a “hardening of the arteries”—may be her stock responses when discussing her career. She covered similar topics in her interview with Irving Sandler in the April 2009 issue of the Brooklyn Rail, which Louden admitted to consulting in preparation for tonight.

Smith considers herself to be a journalist, finding her own voice and having her own reactions. During the 1970s she grew tired of the time lag between a gallery exhibition and its review in a magazine. Switching to the Village Voice, she enjoyed the thrill of publishing while a show was still up—a sentiment I certainly share and practice with my own criticism—while broadening her readership beyond specialist publications. Smith initially wanted to please the artist, but while at the Voice her relationships with creators diminished—she began writing for herself and for her readers. Smith hasn’t forgotten about artists completely: a piece gives them “an example of a reaction to their work,” and she leaves the decision of what to do with it in their hands. “Artists,” she said, “know the most and the least about their work.”

An egalitarian, Smith tries to visit as many New York venues as she can, from major museums to the cooperative galleries on Twenty-Fifth Street to artist-run spaces off the beaten path in Bushwick. A code of ethics at the New York Times, where she’s worked since the 1980s, prohibits giving advice, so Smith no longer visits artists’ studios. Regarding her current employer, “there’s a pressure on the publication not to miss things,” which is good and bad. She always has her ear to the ground, listening for chatter and looking for shows that are art-world catnip, but she’s allowed to not review certain shows. If a young artist is doing sincere, derivative work, he or she probably won’t get a review. If a young artist is doing obnoxious derivative work, a take down might be in order. Smith tries to filter out market gossip when viewing art, looking with disinterest but not ignorance. Somehow artists making money at big galleries have become the bad guys, she observed. Unlike dealers, critics don’t really need to talk to anyone. When viewing a museum exhibition, she prefers curators who are “hands off” and let the show do the work. 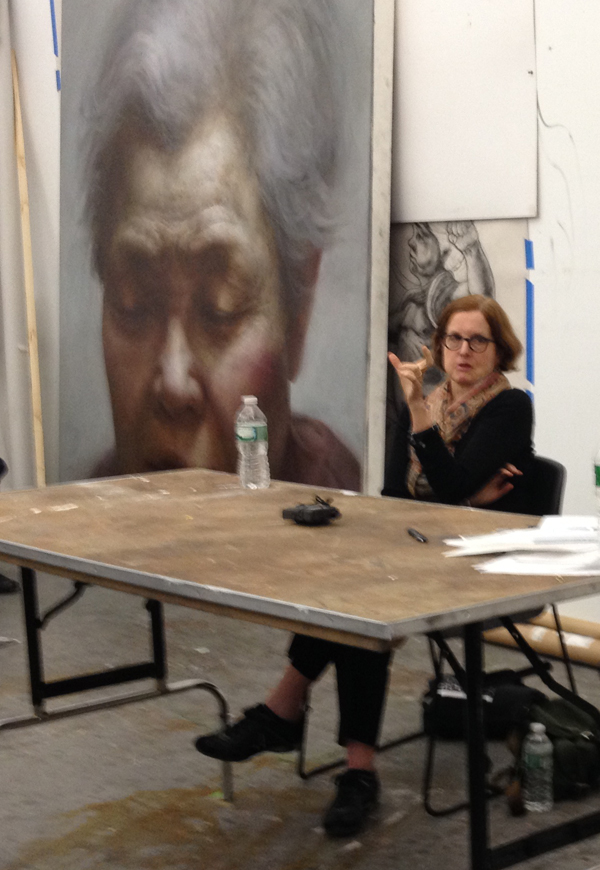 When asked about art blogs, Smith called herself a nonreader of them but encouraged the activity: “It’s good for people to try out being an art critic.” She also said “I love it when people blast off on Facebook,” which she considers to be a cathartic activity for them—though if an opinion is too harsh, she warned, people’s sympathy will lean toward the negative criticism’s subject. Content on social media doesn’t seem that much different to Smith than real-life conversations. “If you went into Fanelli’s on a Saturday night, you’d get a sense of what everyone thinks about a show,” she said, referring to the venerable SoHo bar and restaurant that for many years was a gathering place for art-world types. Has Smith ever felt a backlash from artists receiving a bad review? “Flowers and a nasty note—that’s happened,” she said.

Smith offered puzzling advice to a roomful of what I presumed to be mostly graduate students: you don’t need to be an artist, if you can avoid it. Explaining further, she said that your attraction to art should be amorphous, and that you should follow your path organically. Some of the best art dealers, such as Gavin Brown, she noted, started as artists but found their calling in a related professional activity. Others become framers, photographers of artwork, curators, and critics. Perhaps this was Smith’s way of cushioning the blow when she pans your show in the future.

As a working critic Smith rarely reflects on her body of work, and she isn’t interested in compiling her writing for a book, though I’m sure an anthology of greatest hits will eventually be published. Louden asked her how her separates herself from art historians. Smith acknowledged her lack of academic training—at Grinnell the “studio guys” taught art history. Scholars, she said, tend to use footnotes and arcane language; they also believe in and benefit from hindsight. If critics are the foot soldiers of art history, professors who moonlight as critics for glossy magazines might be the drones: calculated in advance, their strikes are cleanly executed via autopilot—no muss, no fuss. No doubt scholars will sort through what Smith has written over the past five decades for years to come.