If a person wanted to learn more about an emerging artist, fresh out of graduate school, who caught the eye of an advisory board for the Brooklyn Museum, “Artist’s Talk: Caitlin Cherry” was not the place. Instead, an audience of several dozen mostly young artist types that gathered for tonight’s event was subjected to the opinions and interests of Nick Faust, an aspiring art writer with a following on Facebook who usurped the role of interviewer and relegated the artist to an uncomfortable sidekick status. That same audience was also subjected to his foul mouth—a barrage of “shits” and “fucks” echoed throughout the museum from his amplified voice—and to his obnoxious facial expressions. Like Miley Cyrus, Faust took great pleasure in sticking out his long tongue multiple times during the hour-long event.

Caitlin Cherry, born in 1987 and a recent graduate of the MFA program in visual arts at Columbia University, was the subject of the ninth iteration of the museum’s series of exhibitions called Raw/Cooked, which presents the work of “under-the-radar” Brooklyn artists. For Hero Safe, on view June 7–September 1, 2013, Cherry presented three large wooden sculptures of weapons designed by Leonardo da Vinci—a crossbow, trebuchet, and catapult—that had launched, or were capable of launching, three paintings by the artist. These works were tense, dangerous, and provocative. 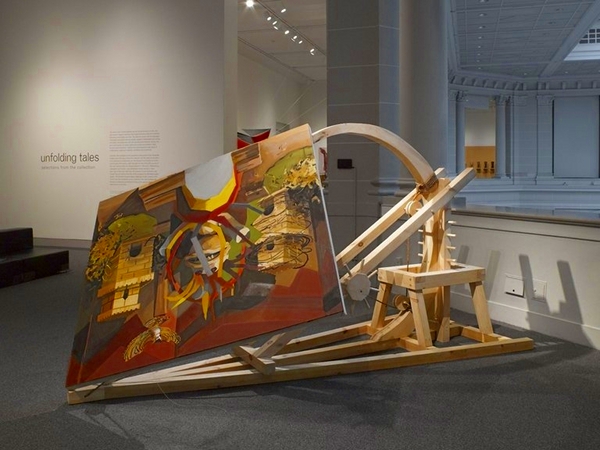 During the artist’s talk, Faust did not ask many questions of Cherry, instead opting to talk at length about subjects that interested him while prodding her when he needed a response. His behavior was flirtatious and charming at first, but this demeanor quickly came to grate, like an insufferable know-it-all who corners you at a party. Faust touched on issues related to Hero Safe and to her larger practice—but just barely. Since the three works in Hero Safe referenced sketched designs by Leonardo, Faust and Cherry contemplated the old notion of the renaissance man. In the fifteenth and sixteenth centuries, this person was an artist, an engineer, an architect, and more, but today he or she has no specialization, easily moving from painting and sculpture to video and new media without rocking the boat.

Since the contemporary artist has become a jack-of-all-trades—and occasionally a master of none—I figured the speakers would discuss the production of Cherry’s work. Did she cut the wood herself or have her sculptures fabricated? Did she design each piece on a computer or sketch them on paper? Does Cherry consider herself a polymath, or is she just interested in the idea conceptually? From a historical perspective, did Leonardo (or anyone else) actually build and use the weapons from his plans? Moving to the present, what might outmoded weapons of mechanical propulsion mean to a world that has developed chemical and nuclear weapons, as well as pilotless airplanes? Questions like these were not addressed.

Cherry’s website shows mostly her recent oil, acrylic, and aerosol paintings, with the occasional three-dimensional element added to create something of an installation. “Painting really bugs people. People have a lot of drama with painting,” Faust declared, without naming names. People feel the medium, he joked, “needs a big spanking.” We like to abuse painting, he continued, but still always come back to it. Even though he loves painting, as do I, Faust inevitably reinforced the hackneyed idea that the medium is inherently conservative, even calling it “buttoned up.” To his credit he cleverly described how closing the top button of a shirt up to the neck causes pressure that lets crazy ideas explode, yet neglected to ask Cherry about her iconography, style, approach, history, or motivation. 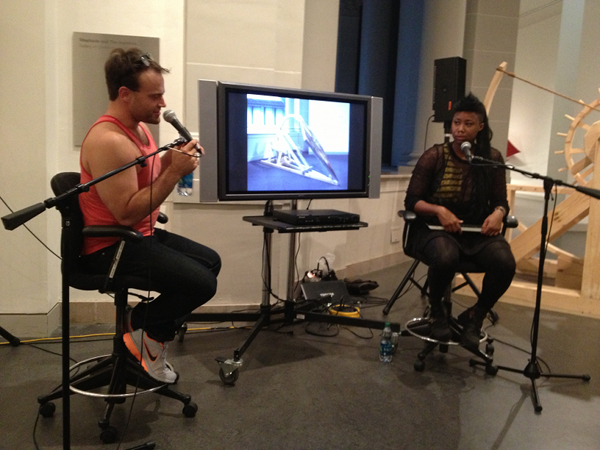 Moving on, Faust quizzed Cherry about the placement of Hero Safe works. She liked the proximity of her Dual-Firing Trebuchet Artcraft to a painting by Anselm Kiefer. Faust loosely connected Kiefer’s “bombastic nationalism” to Cherry’s thesis show at Columbia University last year, in which she installed two large paintings—The Fate of the Rebel Flag (America Provides) (2011), with its patriotic reds, whites, and blues, and Queen Victoria Royale (Prince Albert Piercing) (2012), rendered in drab monochromatic grays—facing each other, with a makeshift cannon on the American side pointed toward the British. (Cherry added a trompe-l’œil crack from a cannon ball to the layers of thick resin covering Queen Victoria Royale and called the piece The Loyalists.) Faust asked if she watches the Military Channel, to which she replied, “I don’t think I watch it, specifically.” He then launched into a monologue about his obsession with the television network’s programming—especially the erotic nature of terms in war discourse such as “payload” and “service length”—but failed to connect his thoughts to Cherry’s work.

Faust asked Cherry about her hometown of Chicago, where she grew up and earned her bachelor’s degree (at the School of the Art Institute of Chicago). She acknowledged the influence of the Chicago Imagists, some of whom still teach in the city. Faust recounted a thought from the critic Jerry Saltz, who in a 2003 review of a Jim Nutt exhibition in New York admitted that, as a young artist in Chicago, he had been embarrassed by this oddball art movement. Faust and Cherry then generalized about how a tight-knit regional art scene often falls victim to immigration (presumably moving to New York or Los Angeles). Apparently this exodus happens all over the Midwest, and not just in the arts: Faust stated that young people between the ages of 22 to 32 don’t exist in Ohio.

Since both speakers are into lifting weights, Faust spent a considerable amount of time dissecting “macho” as it relates to contemporary art, such in the so-called jock art of Matthew Barney. Although homophobic art exists, he claimed, there’s no such thing as macho art and despises the term. Yet he refused, quizzically and almost stubbornly, to find other ways of discussing the notion or framing Cherry’s art. Faust brushed off her alternative concept of “bravado” to pursue his own line of thought, which included other words he loathed reading in criticism—such as superficial, surface, and privileged—and the physical and mental qualities required of the quarterback position in American football. 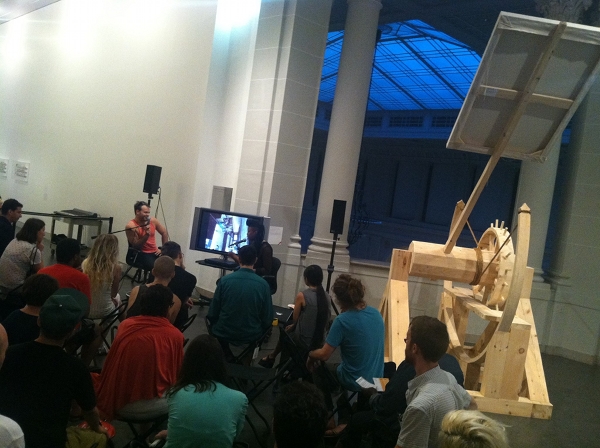 Cherry awkwardly expressed her situation of being a young black artist, with people flying around her like drones “waiting for you to poop out a signifier,” and Faust mentioned something about the scale of her work, with several paintings coming on standard-sized stretchers she picked up from the art-supply store. She called the Hero Safe sculptures “preready” and “prefunctional,” meaning they need additional tinkering before they could actually launch anything. Faust was interested in what painters painters like, and what painters sculptors like. Jasper Johns is one name that comes up regularly among his friends. Did he ask Cherry which artists she admired? Of course not. Instead he explored a waggish notion about artists making paintings specifically for living rooms, bedrooms, kitchens, and sex dungeons.

In response to an audience member’s question about her choice of materials, Cherry said in passing something about the museum defending itself—a tantalizing idea that seemed ripe for interpretation. Might her work connect creativity and destruction, art and war? Instead of originating novel interpretations of her work, “Artist’s Talk” consisted of breezy small talk and idle chatter, the intellectual equivalent of an air kiss. Nothing rose to the level of a significant “conversation,” which when identified kept getting deferred. “That’s a whole ‘nother conversation,” Faust and Cherry repeated many times, as if right now, in the museum with an attentive audience, wasn’t the place for an exchange of words. How unfortunate.

In Terms Of count: 13 (though I should have noted the number of times the speakers said “conversation”).