“I sense some confusion,” observed Casey Jane Ellison, an artist and comedian who hosted a panel called “‘Aesthetics’ of ‘Female’ ‘Attractiveness’” at Frieze New York. Like a daytime talk-show host, she began with a monologue of observational humor—which included a fear of going bald and the dating scene for bulimics—but the audience didn’t laugh. Full of disconnects in timing, diction, and subject matter, her introduction desperately need an applause sign, if not a laugh track. Ellison placed the blame on us: “Art audiences are just kind of like—don’t touch me—you know what I mean?” No, I don’t. “It’s like, get involved,” she implored. “This is about all of us.” Ellison’s awkward monologue made me appreciate the jump-cut edits in her online television programs such as What the F*shion? The non sequiturs were making things slightly better: “Does the truth set you free? No, it will set you on fire.” And, closer to the panel’s topic: “We live in a postmodern world. Are we posthot?” 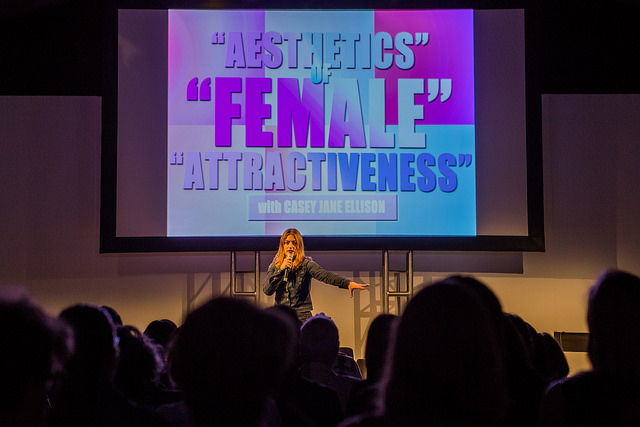 Ellison introduced the speakers one by one, as they took the stage: the artist, activist, and filmmaker Leilah Weinraub; the writer and activist Grace Dunham; the activist and writer Reina Gossett; and the blogger Karley Sciortino. The host’s first questions to them were “Are you feeling safe?” and “How fat do you feel today?” The speakers answered stiffly, probably feeling like the audience did during the monologue. Her next question was more promising: “What was the first object or product you bought that propagated your own objectivity?” Ellison got the conversation rolling with her own experience. As a little girl, she faced with a snack choice at a 7-11 convenience store, choosing a protein bar over candy—even though the caloric intake was (presumably) the same. Perhaps misunderstanding Ellison’s question, Gossett said that paying for school defined her objecthood, and Weinraub came to a similar realization when she “became a vaccinated citizen of the world.” (Her hippie parents apparently didn’t get her shots for mumps and scarlet fever.) Understanding the question way too literally, Dunham said she was born an object and argued that culture objectifies us. Fortunately, Sullivan played the game, describing how she intentionally dressed provocatively in her late teens to early twenties to make herself a sex object, for validation.

The panelists’ responses set the tone for the next hour, with the four guests dodging Ellison’s seemingly random inquiries. “Are you earning enough, as a woman,” Ellison asked. Dunham replied, “Nobody actually asked me my gender identity,” and the host responded, “Can I explain? It doesn’t matter—do you know what I mean?” Weinraub was thankful for her access to resources; Sciortino mentioned something about making money peeing on submissive men. For a while Gossett tepidly criticized economic sexism and enforced gender binaries. It didn’t seem like the conversation was going anywhere until Sciortino cited studies revealing that physically attractive people—the hyper feminine and masculine kind—are perceived by many as better at doing their taxes, more honest, and able to get better rates on loans.

Ellison segued into a segment called “Do You Trust This Face?” for which the panelists responded to images projected on the screen behind them. Weinraub compared a photograph of young Hillary Clinton with the female robot from the film Ex Machina and and riffed on artificial intelligence. While she looks forward to machine realizing a mind of its own, Ellison was skeptical and offered ways to fight malevolent machines: “You just unplug the thing,” she interjected. “They’re battery powered … then you don’t charge the battery.” Ellison then asked the panelists to rate their hotness on a scale of one to ten. While Dunham unsurprisingly resisted the notion of “setting yourself up for a system you don’t want to be in,” Gossett admitted to wanting to be told she looks good. Sciortino considered herself an 8.5 in Manhattan’s East Village, which she said translates to 9.5 in Bushwick, Brooklyn. Dunham eventually gave herself a zero—a number lower than the scale’s minimum—because she wanted to choose an extreme. Despite her nonparticipation, she brought up an excellent point: many individuals are less than desirable and invisible in culture, such as the disabled, people with AIDS, prisoners, homeless people, transgendered people, and other gender-nonconforming people. Weinraub likewise disagreed with Ellison’s game and awarded herself a zero; she got a high five from Dunham. 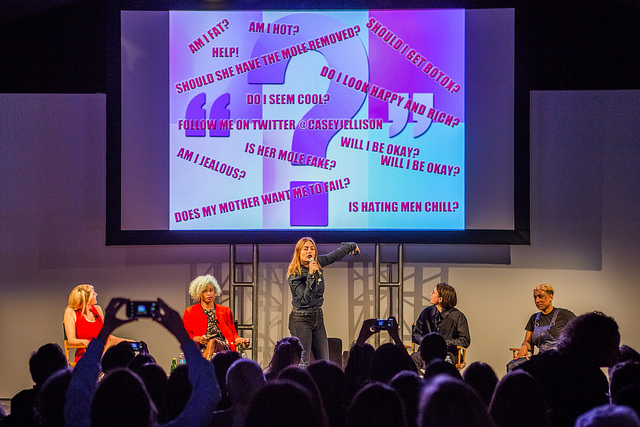 The blonde, busty, and leggy Sciortino observed that appealing bodies are changing. During her high school years in the early 2000s, the “super pro ano” body type of Calista Flockhart, the Olsen twins, and Mischa Barton reigned. “You could see everyone’s backbone on the red carpet,” Sciortino commented. In pornography, though, she has observed a trend toward natural, flat-chested, confident women actors, identifying Sasha Grey, Stoya, and Tori Black as owners of slim bodies that aren’t blonde and busty, which contrasts the norm. Watching porn, Sciortino admitted, has helped her with own body image. “Things bounced around. I was like, that’s hot.” For Sciortino, the newest wave of feminism is defined by individuality. Since there are no more magazines to emulate, she said, women should be the best “you” they can be. Instead of appearing masculine intentionally, as feminists did in the 1970s, women are free to be whatever they want, including wearing “the sluttiest microdress you can find.” Sciortino joked: “No matter what we look like, someone wants to watch you have sex.”

Agreeing with Sciortino’s views on porn, Gossett identified a “trans moment” in which fashion models appear in editorial spreads, though she noted that murder rates for this population are still high. Sciortino noted members of this group are sacrificing their privacy and safety to become accepted into mainstream culture, not unlike how gay men in the 1950s came out and were harassed, a move that slowly led toward their acceptance into straight society decades later. Dunham warned against outsiders assimilating into a culture that had previously rejected you. It was curious that no one mentioned the recent announcement of the former Olympic athlete Bruce Jenner revealing himself as a woman, Caitlyn.

“What is a whore?” Ellison inquired, but no one responded, so she moved onto a game called “There’s Suffering in That,” for which the panelists briefly responded to seemingly random photographs pulled from the internet. Everyone missed the crass American patriotism in an image of a woman’s hand, wrapped in red, white, and blue beads and holding up her index finger in a “We’re Number 1” way. Weinraub said the image made her happy, but I couldn’t help but picture a crowd of drunken bros at a sports bar chanting USA! USA! USA! The panelists somehow found suffering in two photos of cute dogs wearing sweaters. Weinraub experienced numbness and deep pain in a photo of a cake pop, but a seaside resort photo appealed to her “maximalist nature.” 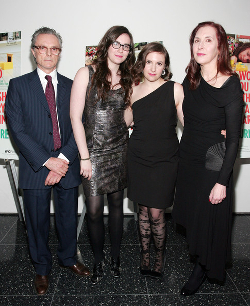 With time running out, Dunham read a short text that she and Gossett wrote together (read the transcript at Slutever). Being hot means having value, the statement began, which can be marketed, assessed, and branded. It can also reflect power and capital. Dunham acknowledged her privileges and advantages: being white, being relatively famous (her parents are artists Carroll Dunham and Laurie Simmons, and her sister is Lena Dunham), possessing a vagina but having sex with women, and having power through association, via her relationship with black trans man. This relationship to power, fame, identity, and marginal authority, she said, makes her critique legitimate. “Those are the reasons why I’m hot,” she concluded. “That’s how hot I am.” The way Dunham reconciled contradictions of value and power without irony or haughtiness impressed me. But she dug deeper, saying that everyone longs for feelings of being known or being loved—which doesn’t necessarily mean being hot physically or aesthetically—and that compliments from the dominant system can make us feel good. An important distinction should be made, Dunham continued, between the self and the evaluated market value of the self. Further, fame can isolate people and push intimacy away, and a longing for fame can be harmful.

Dunham said that people complain about art fairs and culture—“This fucking art fair,” she hilariously quipped—but at least at Frieze New York the financial aspects, the “economies of evaluation” in her words, are laid bare. (She declared that she was paid $500 for her panel appearance.) Art fairs, Dunham continued, allow people to fill the holes in their hearts, to reproduce the culture of evaluation, for better or worse. What is it about dealing art that makes you feel better or worth something,” she asked art dealers rhetorically. And of others: “Why am I valuable? Who do I want to be? How do I want to be loved?” After hearing this, I felt that we didn’t need Ellison’s faux talk show. Dunham could have read this piece onstage and left it at that.