May 26, 2015 By Christopher Howard
Conversations

Pawns in the Game 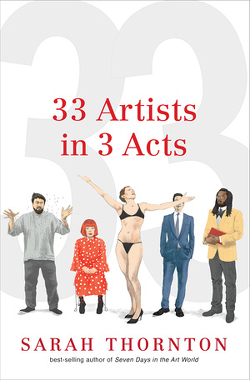 The journalist and sociologist Sarah Thornton was interviewed about her latest book, 33 Artists in 3 Acts (New York: W. W. Norton, 2014), at the New York Academy of Art, where she was also the school’s commencement speaker for this year’s graduating class of MFA students. The book chronicles the upper crust of the contemporary art world—the kind you read about in the Scene and Herd section of Artforum.com—from 2009 to 2013. Benchmarks in conversations and studio visits with the dozens of artists that Thornton interviewed were Jeff Koons, whom she considers to be conservative, and the high-risk Damien Hirst. Other recurring characters include Maurizio Cattelan, Ai Weiwei, and Andrea Fraser, as well as the artist couple Carroll Dunham and Laurie Simmons and their daughters, Grace and Lena Dunham. The people profiled in 33 Artists in 3 Acts, mostly midcareer professionals who were born in the fifties and sixties, are “all the real deal,” she said, with no authenticity and credibility issues. (She would need to write a separate book for emerging artists.)

Wearing white jeans, a black blazer, and athletic sandals, Thornton was interviewed by David Kratz, a silver-fox painter and the president of the New York Academy of Art—a small graduate school that specializes in representational and figurative work—and the painter Peter Drake, who is also dean of academic affairs. Kratz inquired about the image of Gabriel Orozco’s chessboard work, Horses Running Endlessly (1995), which illustrates the book’s introduction. “Is that the art world?” he asked. Calling Orozco a “strategic player” (but not explaining what that meant), Thornton disclosed that the art world isn’t as egalitarian as a chessboard occupied only by knights—the punch line of Orozco’s work.1 Instead, the art world has “kings, queens, and pawns,” though I’d argue that the art world has more sacrificial pieces than power players in its own chess game. Success acculturates artists into the art world, she said, and they must figure out their position. Thornton believes that the art market should be part of an art school’s curriculum and warned against early career burnout from success—a future problem that I imagine many wish they would have. 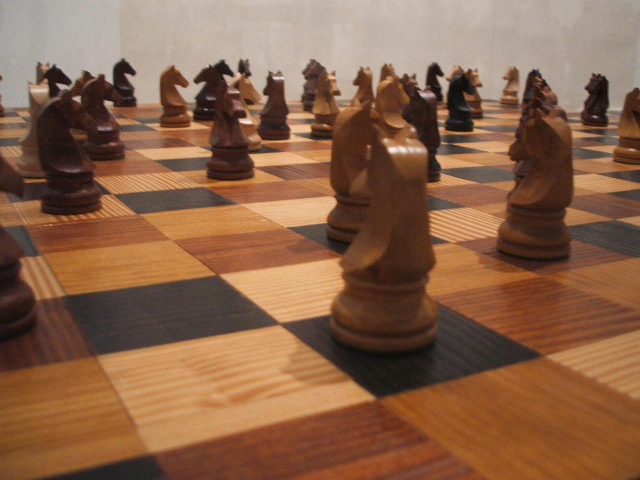 Kratz asked about artists whose “crazy” works for them, and whose “crazy” doesn’t. In the former category Thornton placed Grayson Perry, famous in Great Britain but not so much here, who is a happily married transvestite potter with a daughter in college. The aging Young British Artists grumbled, she continued, at his winning the 2003 Turner Prize not because he dresses in women’s clothing but because he produces ceramics. Regarding bad crazy, Thornton said that Yayoi Kusama is the only artist whose craziness is acceptable. Yet if Kusama (b. 1929) were in her thirties today, Thornton said, nobody would accept her kooky behavior.

High art and functional objects apparently have strong class divisions, at least in England. As a writer, Thornton identifies with craft, though it’s not wrong if an artist employs the labor of others to complete a project. She identified Christian Marclay’s breakout video The Clock (2010) as the example: Marclay had teams watching films but edited much of the footage himself. What is the different between art and craft, Thornton was asked. The concept makes it art, she replied, though the lines can blur. It is possible, Thornton continued, for artists to become craftsmen of their own work, if it becomes slickly produced. Perry, she said, claimed to be able to teach others to make his work, but they cannot make the art he is about to make.

Drake directed attention back to 33 Artists in 3 Acts, asking Thornton if artists have their own view of success. She recounted how one thread in the book follows Laurie Simmons and Cindy Sherman, two photographers from the Pictures Generation, whom Thornton called “artist soul mates.” While Sherman’s career has certainly been larger than Simmons’s, the disparity hasn’t affected either their creativity or their friendship. 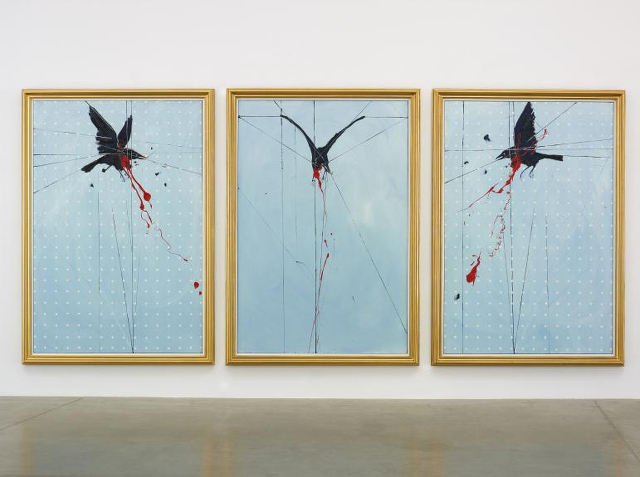 Thornton reiterated the importance of Hirst in her narrative, which makes sense for a journalist covering the economic side of the art world. Her profile on the bad-boy artist in the Sunday Times Magazine in 2009 was positive. She changed her tune in a 2010 article in the Economist, for which she researched Hirst’s direct-to-auction sale of his work in fall 2008. Bypassing the traditional dealer/gallery system and heading straight to the deep-pocketed collectors was a move that netted him $200 million. Thornton’s personal access to Hirst ended there, at least until 2013, when she cornered him in Qatar during a press preview for his retrospective Relics. “I don’t know how he feels about the book,” Thornton remarked, “and I don’t know if he reads.” The snark didn’t stop there. Thornton finds Hirst’s recent paintings to be “diabolical,” especially considering that he gave up painting at age 16 and took it up again in his forties. His spot paintings, which were shown in every Gagosian Gallery worldwide in 2012, are the “diffusion line of brand name.” “He lost faith in his practice,” she added, calling him an “interesting sculptor and an opportunistic painter.”

An audience member asked if any of the artists she wrote about have overcome adversity. They all have, she said, emphasizing that the Chinese Ai and the Chilean artist Eugenio Dittborn have been challenged on political and governmental levels. Another person inquired about the art-world game, which Thornton described as soccer, because it’s always changing. She advised the audience member to “choose your game, be good at it, and make others play it.” She also advised artists to understand social dynamics and etiquette and to not get duped. Some well-established dealers are notorious for not paying artists, Thornton revealed, and advocated banning them from art fairs.

Someone asked if it is true that the most successful artists have great self-doubt. Yes, she replied, and artists such as Cattelan embrace it. She also implied that Hirst is insecure. The final question from the audience addressed artists and suffering. Thornton’s unexpected, thoughtful response concerned motherhood: artists such as Sherman and Marina Abramović sacrificed having children for their careers. Yet having children, Thornton appended, is not the credibility killer for women artists under 55 that it once was.

I sensed that Thornton presented herself as outsider to the art world. In her writing, she said, she watches the dynamics of opinion rather than passes judgment. I also sensed disconnect between her and the audience, which routinely failed to respond—with laughter or applause—to her stories at the right moments. A few times Thornton was the only person laughing at her remarks. The setting at the New York Academy of Art was informal, and the attendees seemed to be made up of young artists—the pawns of the art world. This made Thornton’s jet-setting glamor something of a mismatch, but not glaringly so. I was left to wonder what she offered to the school’s graduate students.