Sugar and Spice and Everything Nice 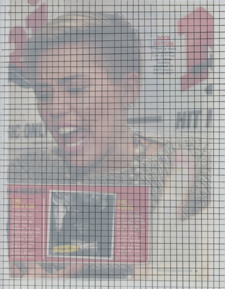 The artists Alex McQuilkin and Cindy Hinant and Kathy Battista, director of contemporary art at Sotheby’s Institute of Art in New York and senior research fellow at the University of Southampton in England, met at the NEWD Art Show, a small art fair that coincided with Bushwick Open Studios, to discuss art that deals with “girly” aesthetics. The panel’s teaser offered this: “From makeup to celebrity culture, these artists mine “girly” motifs—often ignored or dismissed as flippant and unserious by the art world—to explore issues of gendered expectations and pressures women face through representations of women in the media and culture at large.”

But what exactly is a “girly” aesthetic, anyway? On a casual level, Hello Kitty and Holly Hobbie come to my mind, as do princesses, pink dresses, tea parties, heart-shaped cupcakes, fruity cocktails, playing dress-up—and actually dressing up. I’m sure you could come up with your own list. Yet for a panel that implicitly set out to challenge stereotypes, the speakers didn’t try hard to debunk this aesthetic ghetto or even define it. It would have been enlightening if they had pointed out when images of stereotypes are innocuous or dangerous, but they didn’t I suppose we can use Supreme Court Justice Potter Stewart’s helpful rule of thumb of “I know it when I see it,” but such an approach can reinforce faulty preconceptions. Instead, McQuilkin and Hinant gave brief presentations of their work, followed by a discussion about feminism with Battista. 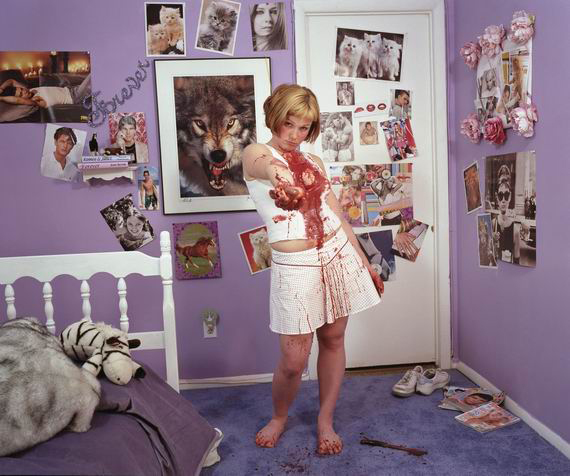 McQuilkin made her video Fucked (2000), a three-minute clip of the face of a young woman—the artist herself at age 19—putting on makeup while (apparently) being fucked from behind. The work caused a sensation when the gallery Modern Culture showed it at the 2002 Armory Show. (I was among those who saw it there.). Explaining the piece, the artist said that Fucked demonstrates how physical appearances alienate a person from the world, and how an image can be greater than the experience. Ironically, she always gets asked if the sex in Fucked is real or simulated, a fact that for me is ancillary, and not integral, to the work’s meaning. That didn’t matter when Fucked was pulled from an exhibition in the Netherlands for being child pornography. The edition sold well at the Armory, McQuilkin said, and one creepy collector even permanently installed it in his bedroom. She knows this because he showed her the room. 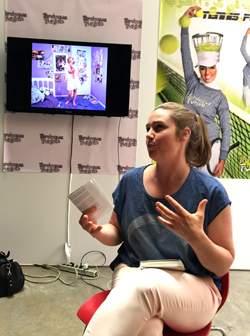 More recently McQuilkin has been drawing the likenesses of Brigitte Bardot and Catherine Deneuve in their prime, but with blank spaces where their faces should be. “They’re made for us to project ourselves onto,” she explained. McQuilkin noted that Bardot felt that she had scored her first serious role as an actor when cast for Jean-Luc Godard’s 1963 film Contempt, but the American trailers pimped her babeness instead her professional chops, offering sexy shots of Bardot that were not in the film.

Another recent work is Magic Moments (Preliminary Materials for a Theory of the Young-Girl) (2013), a video comprising appropriated clips of young, white fashion models from television commercials and online advertisements, moving in slow motion to the soundtrack a woman singing “The Star-Spangled Banner.”1 We are comfortable looking at the women, McQuilkin observed, adding that she gets the “feeling of ‘I want what they have.’” It’s the classic male gaze. Combining ubiquitous images with national pride and naturalizing both, Magic Moments is not dissimilar from what you might see on a billboard-sized television screen in Times Square or in a display in a retail clothing store—delightfully blurring the division between art and commerce. The lack of a clear position—critical or complicit—seems to be McQuilkin’s point.

Hinant admitted having a love/hate relationship with popular culture and cosmetics. For The Sephora Project (2012), she visited branches of the cosmetic-and-perfume chain store across Manhattan, filling out comment cards that detailed her interactions with staff and other shoppers. Her exhibition Aesthetic Relations at Joe Sheftel Gallery in 2012 addressed the right of publicity and agency: celebrity sex tapes, up-skirt photography, and revenge porn—what Hinant succinctly called the “aesthetics of violation.” Another body of her work reacts to paparazzi photos and Instagram feeds that show celebrities without makeup, with the former genre mocking their looks and the latter resisting the beauty myth. She explained that “‘without make-up’ is code language for ugly,” though it seems as if the famous are trying to dispel that thought. Inherent in Hinant’s conception of celebrity is a process of identification with, and rejection of, both yourself and the object of your fascination. Whether or not this experience is just part of growing up, she didn’t say.

Hinant screened an early work, The Kissy Girls (2006), a kind of home movie that interviews her 11-year-old sister, who admitted to kissing at least ten boys. The video also showed Hinant’s sister—who perhaps exemplifies the sexually precocious “knowing child”—teaching the artist how to dance to a Missy Elliot song. In another series of works, Hinant overlaid grids of ink and Mylar on pages taken from trashy magazines like Us Weekly, pages that show photographs of the former child stars Tori Spelling, Lindsay Lohan, Miley Cyrus, and Amanda Bynes, as well as the those of television personalities Kourtney and Khloé Kardashian. “The grid is a utopic space,” Hinant said mysteriously, “where one line does not have more value than another.” 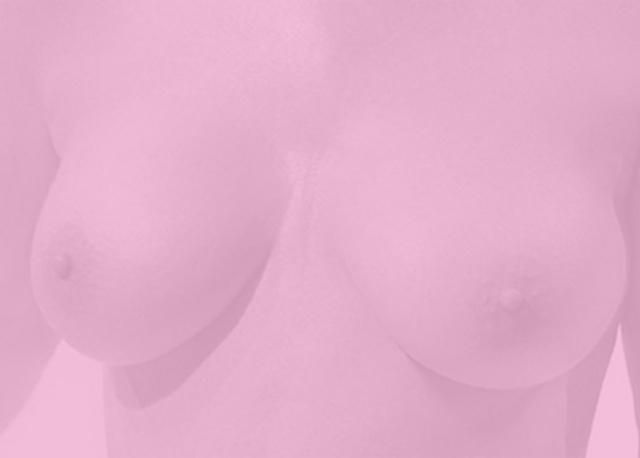 As moderator, Battista tried to create a conversation around art, gender, and fashion, and on the body as a site for consumption. In the mass media “we see images not of girls,” she said, “but of capitalism.” McQuilkin’s students at New York University believe that we live in a postgender time, but she still finds images as problems, which she attributed to being older and wiser. Hinant pointed out sexism in measures of artistic success: “If Carolee Schneemann wasn’t a babe, she wouldn’t have made it in the art world.” (In 2011 Hinant made C-prints of cropped appropriated images of the bare breasts of artists such as Schneemann, Yoko Ono, and Hannah Wilke.) Battista argued that male artists Richard Phillips and Richard Prince make work about female celebrity and noted that the singer and producer Pharrell Williams organized an exhibition called G I R L for Galerie Perrotin in Paris, on view when his “date rapey” song with Robin Thicke, “Blurred Lines,” became a smash hit. Though Williams publicly calls himself a feminist, Battista said, he practices “strategic misogyny” elsewhere. 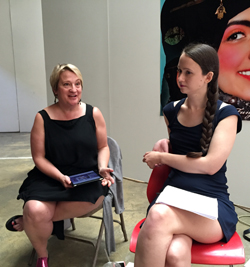 During the audience Q&A, someone said that, when understanding feminism, some take a strictly economic view, which demonizes mothers who stay at home to raise children. An audience member made a comment that I interpreted as “It’s 2015—what the fuck.” Battista said that having children takes years off the lives of artists and academics, based on anecdotal, personal experience. Both artists recoiled at the term “girl” when asked to participate on today’s panel, but in 2006 interview McQuilkin was much more forthcoming with her attraction to adolescence—but she also said that she has moved on.2 The only time the “girl versus women” debate surfaced what when McQuilkin said she had no problem referring to a male-dominated art world as a “boy’s club” because the power dynamic is different.

If I were moderating the discussion, I’d ask the artists about authenticity, imaginative play, and feelings of immortality, among other topics. For instance, can older men to portray girls in contemporary art without being total creeps? Are depictions of girls by women the only acceptable kind of representation? Growing up, McQuilkin lived in a bedroom “curated “by her mother, like a dollhouse. By contrast, her brother taped Metallica posters to his walls. “The maid didn’t go in there,” she said, without irony. How are gender roles inscribed across race, class, and nations?

Adolescent studies in disciplines like psychology and sociology are rich, and so is literature—Lewis Carroll’s story Alice’s Adventures in Wonderland (1865) and Vladimir Nabokov’s novel Lolita (1955) are touchstones. But the subject has been little examined in visual art apart from a collection of essays in Girls! Girls! Girls! in Contemporary Art (2011), edited by Catharine Grant and Lori Waxman. The book argues that the art world’s fascination in girls peaked in 1999, the year in which a photography exhibition called Another Girl, Another Planet took place at the gallery Lawrence Rubin-Greenberg Van Doren, yet interest in young women in popular culture—from songs by the Beatles (“I Saw Her Standing There”) and the Rolling Stones (“Stray Cat Blues”) to the Larry Clark film Kids (1996) to Lena Dunham’s television show Girls—is decades old and continues to grow. 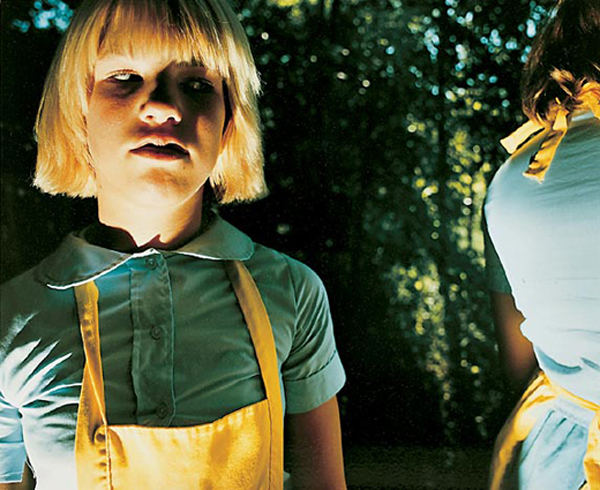 I would argue that the same is true in the art world, but the panelists neglected to discuss other artists making work about girls, such as Anna Gaskell (who once assisted Sally Mann), Laurel Nakadate, Collier Schorr, and Sue de Beer (for whom McQuilkin has worked). There’s something repulsive in how Erin M. Riley cranks out tapestries of scantily clad teen girls taking selfies in the bathroom mirror, but images of them are hugely popular on Instagram. What about historical figures such as Balthus and Edgar Degas, or contemporaries like Ryan McGinley and Richard Kern? As an artist who specializes in nude pictures of young (but legal) women, Kern practically lives Matthew McConaughey’s famous line in the movie Dazed and Confused: “That’s what I love about these high school girls, man. I get older; they stay the same age.” Should why is the representation of “girls” in contemporary art a subject stuck in perennial adolescence?

1 McQuilkin cited the book Preliminary Materials for a Theory of the Young-Girl (1999), written by a collective of French artists and activists under the name Tiqqun, as an influence.