How We Would Give Talks 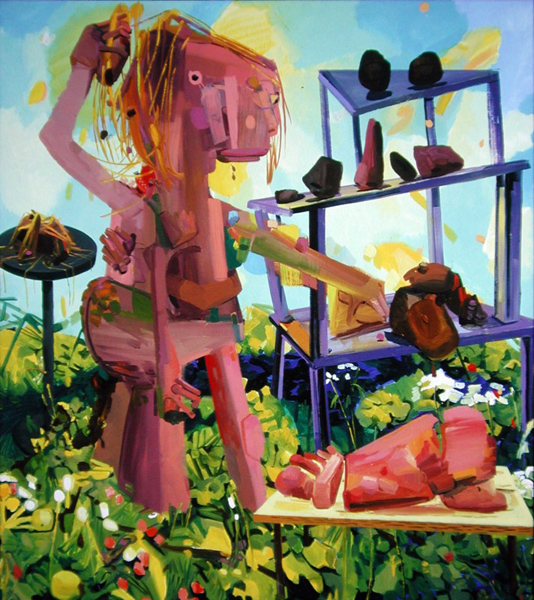 “What’s going on here?” is first thought a person might have upon first encountering a painting by Dana Schutz. One might do well, of course, to ask that same question when viewing any work of art, but because Schutz has spent ten years plus creating pictures that, while largely figurative and representational, are highly unusual or improbable, extraordinarily goofy, and charmingly awkward. Her subjects include portraits of Frank, the last man on earth, and the activities of the Self Eaters, who constantly devour and regenerate their bodies. Even the less bizarre scenarios are befuddling, such as her version of the Mona Lisa in profile. In a recent talk at Parsons the New School of Design, Schutz expressed her fascination with the “weird science-fiction landscape she’s in.” About the woman with the mysterious smile, the artist wondered, “How’s she going to get home?” 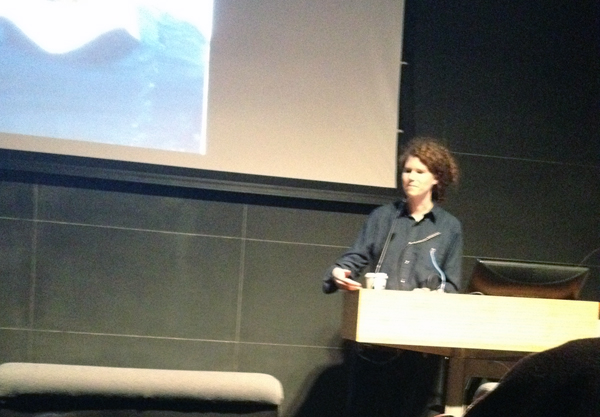 Schutz chose a chronological approach to her talk, first discussing the development of her work from her undergraduate days at the Cleveland Institute of Art in Ohio to graduate school at Columbia University in New York, and from her early professional career to the present day. Many of these paintings and drawings were collected for her second survey exhibition, the critically praised Dana Schutz: If the Face Had Wheels, which was coming to a close at the Neuberger Museum of Art. The artist said that her introduction to contemporary painting came in the mid- to late 1990s, a permissive time for the medium, since people were supposedly not paying much attention to it. With an interesting take on the postmodern pastiche, Schutz believed that “you can make many meals out of leftovers.”

The artist spoke of the risk of creating a subjective space and the need to find a balance between self-indulgence and making something others can relate to. At the same time, she continued, creating a painterly painting in the late 1990s was considered either a masochistically bad decision or an extremely naïve one (the interpretative phrasing is mine). Schutz described how her approach to painting moved from “picture/object” to “person/container,” which wasn’t entirely clear but makes sense considering how, in the words of one audience member, her work seems so personal. And Schutz is definitely an odd bird with a wild (and wild-eyed) imagination that’s incredibly open and curious, not obscure, hermetic, or cynical. 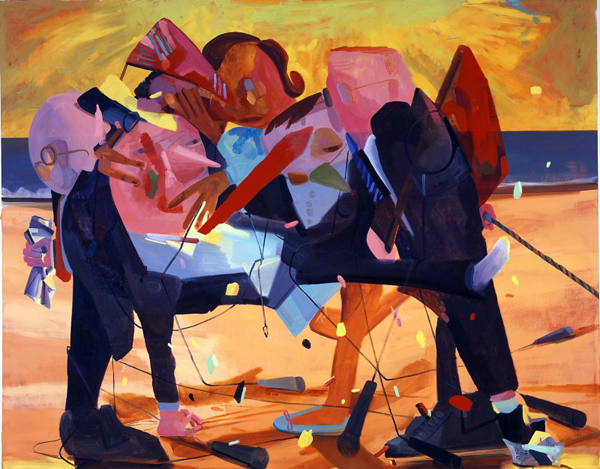 Competently articulate when talking about her work, Schutz ran through several dozen images of paintings, offering tidbits on certain pieces and calling attention to their peculiarities—the big toe pointing at the viewer in Presentation (2005), for instance, or the cobbled-together object depicted in an early work that could be representing the end-of-the-semester dump of failed art-school projects. A picture of a girl sneezing, she said, was made to show what sneezing feels like, since the action happens so fast we can’t observe its frozen moment. Schutz said the tangled politicians in Party (2004), inspired in part from the Republican National Convention in New York of that year, might portray a media disaster or a celebration, or a farce of both. She said her painting of Poisoned Man (2005), modeled after the disfigured Ukrainian prime minister, Viktor Yushchenko, could be seen as a Dorian Gray.

Schutz conceded that she struggles with fiction, but earlier in the talk she claimed a need for narrative. Narrative, however, isn’t the right word to describe her work. There’s not so much a story as there is a situation, often invented and not usually experienced firsthand. For example, she made The Autopsy of Michael Jackson (2005), painted several years before the performer’s death, because of a fascination with how his body always seemed already sectional or disjointed: the feet dancing on their own, the gloved hand, the vocal hiccups—his body ripe for dissection. Even something like the extremely uncomfortable How We Would Give Birth (2007) is a conjecture, since she doesn’t have kids. 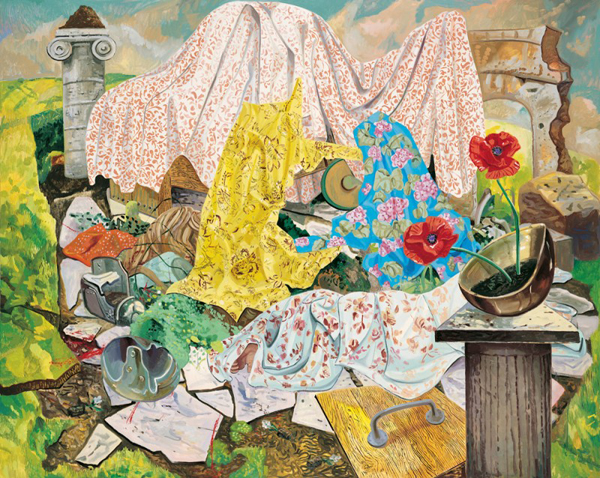 Her scenes are wild and improbable but usually have a structure or system that helps viewers to make sense of them. Schutz asked, “What if you’re building a Colosseum but are short on time, or you want to garden but only have bed sheets?” You might make something like the eight-by-ten-foot painting, Historical Reenactment with Plants (I’m into Conceptual Gardening) (2008). Or the kind of cute, kind of disturbing figure hanging in Needy (2007): “The painting wants to hug you, but you don’t want to hug it back,” she buoyantly and wryly commented. Schutz showed a few images of situations that combine a trio of verbal activities, such as Swimming, Smoking, Crying and Shaking, Cooking, Peeing (both 2009), “with the three together, it’s a problem.” 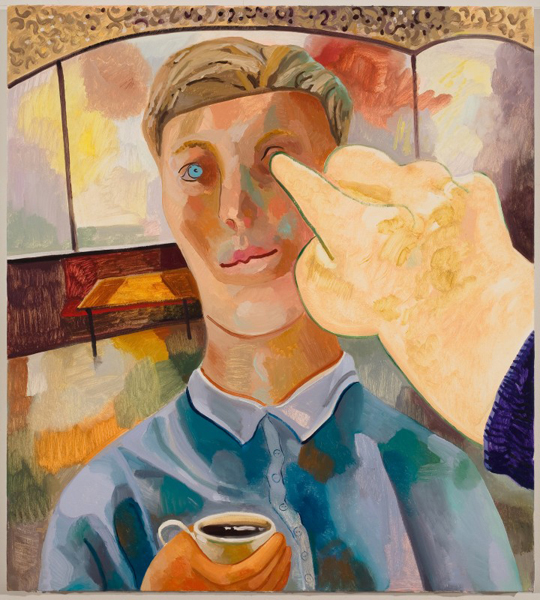 “People like that exist in Cleveland,” Schutz said, referring to the earth-toned figure in Time Traveler (2007) sporting a 1970s turtleneck. She identified the person on the left as a former art-history professor. The artist said she had a recent lunch with a good-looking friend and noticed, for the first time, how beautiful his blue eyes were. She instinctively reached out to touch them, an event captured in a painting called Poke (2010). “You know that haircut’s not gonna be good,” talking about other activities taken on by the clunky, cumbersome hands she has been painting lately.

Someone asked Schutz if she paints strange scenes because she wants to break social norms. No, she has neither the desire nor the urge to experience the things she paints, which are sometimes, she admitted, just horrible images that come to mind. Dumb, crazy things can work in a painting but be a disaster in real life—just look at Gravity Fanatic (2005) or Frank’s sunburned, naked body. Ouch!