Living Well Is the Best Revenge

Liam Gillick, an English-born, New York–based artist and educator, sneezed three months ago and became half deaf. He highly recommends the ear flush that corrected the problem. As the recipient of this treatment several years ago, I concur with the artist.

Gillick said he would show his work instead of presenting a “pseudoacademic paper on some subject.” Thus he gave the standard artist’s talk that provided a chronological overview of his career, focusing largely on the 1980s and 1990s and skimming over the past decade. Addressing a half-full auditorium of mostly undergraduate art students, Gillick talked about attending art school in England in the 1980s to avoid doing “something” and also to pass the time. No ethical or profound thought guided his decision, except for an urge to do “something else.” Artists, he felt, were meaningful, active participants in society, but he also admired the “inclusive avoidance” and “zone of incompletion” afforded to them. Back then Gillick also expressed an interest in studying philosophy and law, and in working in the labor movement. Art school was indeed the right choice for this interdisciplinarian. 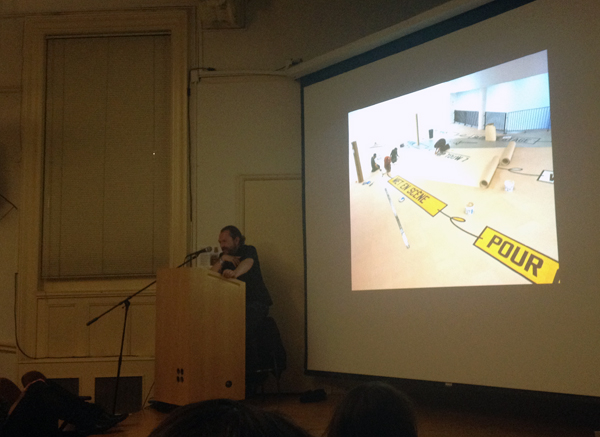 An early member of the Young British Artists scene, Gillick expected art school—he attended Goldsmiths College in London—to be a place for students to shape their artistic persona. It instead became a competition in which the “seminarization” of art gives you “truthiness,” as opposed to true insight, his implied assertion. Among his student work was an abstract portrait of Adi Dassler, the founder of the athletics company Adidas. Someone told him that if he did produced more stuff like that, people—meaning the art world, I think—would be interested. Gillick found it necessary to destroy that piece to continue developing his practice, which began to focus on making work without singularity and resolution.

From 1987 to the early 1990s, Gillick lived in a moment of un- or semiexamined existence, an overdetermined youth as he called it. He had no vision and no ideas and spent time designing buildings on a Macintosh computer—one with one megabyte of memory and a twenty-megabyte hard drive. He would occasionally have shows, such as one at Lisson Gallery, but operated mostly in “middle spaces,” like a consultant does. He showed pin (or bulletin) boards as art—with information about the exhibition itself, such as press release and, soon after, reviews—in a group show with established artists such as Katarina Fritsch, Rosemarie Trockel, and Peter Fischli and David Weiss. Gillick called these pin boards “preinternet browsers” that featured material for the kind of people who browsed magazines or spent time in libraries. Fischli and Weiss found the board in one exhibition amusing and thought it was interactive, pinning their own stuff onto it.

Gillick then collaborated with a fellow artist and writer, the moody Henry Bond, who considered photography to lack a certain element of capital-A art and therefore was the only medium with political meaning that offered a chance to engage a larger public. Gillick and Bond operated in an office of sorts, with a fax machine that received daily notices of newsworthy events happening in London. As relatively straight, clean-looking young men with cameras, they discovered that they could get into any event and felt it was “our obligation to verify and check” those events, which sometimes, he noted, were simulacrum of an event. Called the Documents Series, the project occupied the two artists from 1990 to 1995.

During this time Gillick claimed he had a high standard of living with a low income—and continued working on experimental and publishing projects. If anyone “collected” his work, it was to invest in the artist himself. He spent time writing scripts for settings in which secondary situations became primary (not sure what this means). He also wrote “parallel histories” on various subjects, such as a film script called McNamara and a manuscript on the Dutch humanist and philosopher Desiderius Erasmus. The art context gives bad writing a place, he said, though I am not sure if he was downplaying his own writing or that of others. Gillick revealed that a précis he wrote on German social-sciences research was an amazing breakthrough in institutional thinking, but was also the beginning of soft-shell relational aesthetics, an art movement with which he is most associated. The work in that genre, which involves strategy, negotiation, and compromise, became too regular, that is to say, standardized, though at the time his project that involved the public directly in the art was novel for the time. In 1995, he said, it was not glib for an art museum to have a dedicated day for skateboarders or airline pilots.

In an interpretive brushoff, Gillick quickly ran through images of projects from the past decade and told the audience to rely on their smarts to figure out what they think. The idea for his play A “Volvo” Bar (2008) came from an episode of the 1990s television show Sabrina the Teenage Witch. For him similar-looking work—meaning his colorful interior arrangements of benches, shelves, and other modular structures designed to facilitate conversation—is not repetitious but serves as a platform with extensions going in all directions. Gillick described an interesting failed project: to create a film machine in which a person could feed images into a computer application in order to produce a movie. He wondered if PowerPoint or Keynote presentations is the compromised result.

An audience member tried to articulate a question about an artist reaching the right audience, an art-folks-versus-real-folks dilemma. Gillick said that if you try to step outside contemporary art, you’re still in it. Gillick doesn’t see this a problem. If there is, it’s a curatorial one, not an artistic one. Especially in museums and academic institutions, which must engage audiences. Transparency isn’t always good: “I’m not always trying to be transparent.” 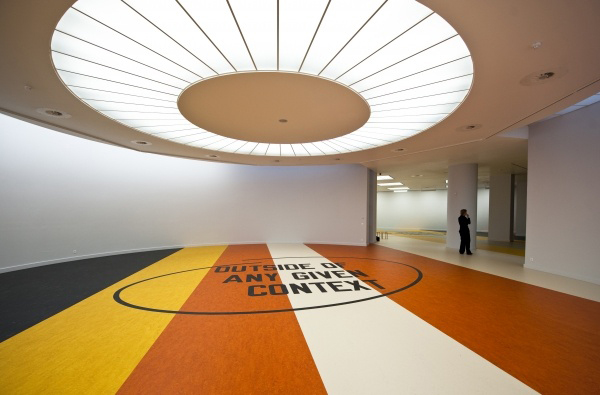 Talking about experiences staging A Syntax of Dependency at the Museum of Contemporary Art Antwerp in Belgium (February 3–May 29, 2011), Gillick said that his partner, the American artist Lawrence Weiner, is still subject to the same kind of instrumentalizing bullshit from clueless curators and administrators that Gillick experiences. Weiner’s generation, he said, was prickly about who did what first. Gillick’s contemporaries had no originating moments. In fact, he said, it’s who did what last that matters. In the past this could be considered the sellout moment, but the difference between selling out and buying in is much hard to maintain.