Reversing the Theory of Art

This essay is the first of three that reviews a day of seminars at the Performa Hub. 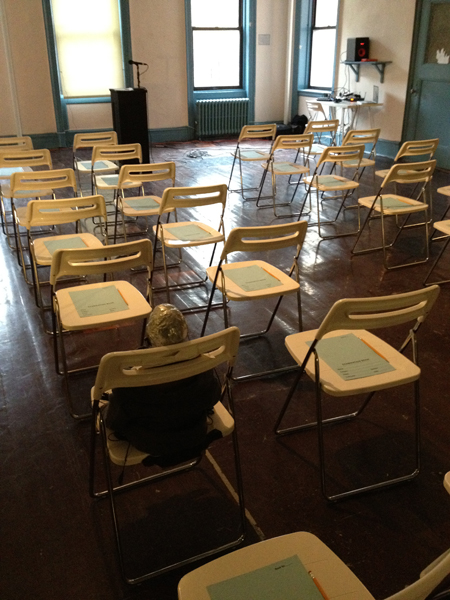 Dennis Oppenheim and the Art of Survival, organized by Amy Plumb with Pamela Sharp and Aaron Levy, celebrated the legacy of the seminal New York artist who died this past January. Three interrelated “provisional seminars addressed three performance-oriented works: Lecture #1 (1976), Theme for a Major Hit (1974), and Radicality (1974)—perhaps purposely chosen, in memory of the absent artist, for their lack of the appearance of a physical performer in their initial iteration or regular presentation format.

The day began at the Performa Hub, located in a former schoolhouse in Little Italy, with a re-creation of Dennis Oppenheim’s not quite well known but nevertheless important work, Lecture #1. (The Whitney Museum of American Art owns but rarely shows it.) The ad hoc configuration resembled the 1974 version, with slight but not insignificant adjustments. Forty-eight folding seats in the room, arranged in four rows of twelve, replaced the simple, blocky chairs of the original. A marionette of the artist moved from the front podium to a folding chair, displacing another puppet, described in a period review as a black man, from his seat. Substituting the recorded audiotape, a live, surrogate speaker (Levy) read the work’s text aloud. At the Performa Hub, the audience was asked to stand at the sides and back of the room. 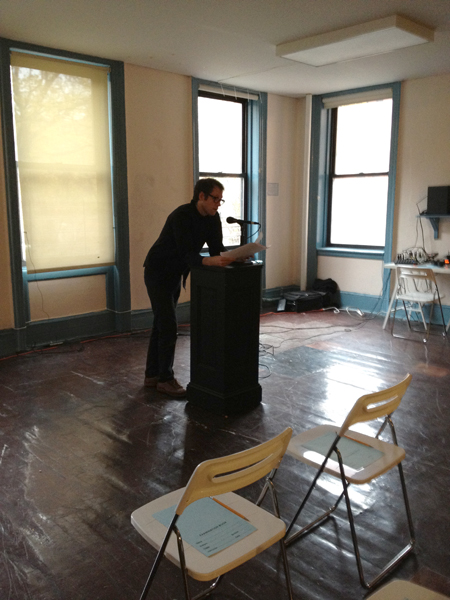 Oppenheim’s haunting text takes the plane crash that killed Robert Smithson as a point of departure, spinning an unnamed artist’s tale of a mysterious series of (ficticious) deaths of American avant-garde artists (e.g., Walter De Maria’s suicide, a bomb on a Boeing 747 killing Carl Andre, Bruce Nauman, and others). The increasingly paranoid rant leaves off in late 1987, the art world devastated by the work of probably one person (who may or may not be an artist.)1

Thirty-five years after Oppenheim first presented Lecture #1, much can be read into the text, coincidentally or not. For example, September 11 is the date attached to Michael Heizer, who “was found trampled to death outside his trailer in Reno, Nevada.” The speech also seems to forecast SoHo’s decline, perhaps the artist’s comment on New York’s near bankruptcy in 1975. The narrator talks about real-estate defaults, with SoHo becoming a ghost town, not unlike the empty chairs of the lecture room. Junkies and squatters have filled the famous gallery building at 420 West Broadway, the story continues. Of the two galleries that remained, “the caliber of work they exhibited bordered on department store art and its proprietors had no way of relating to any sense of recent art history.” That sounds like the south-of-Houston gallery scene anytime after 2000. 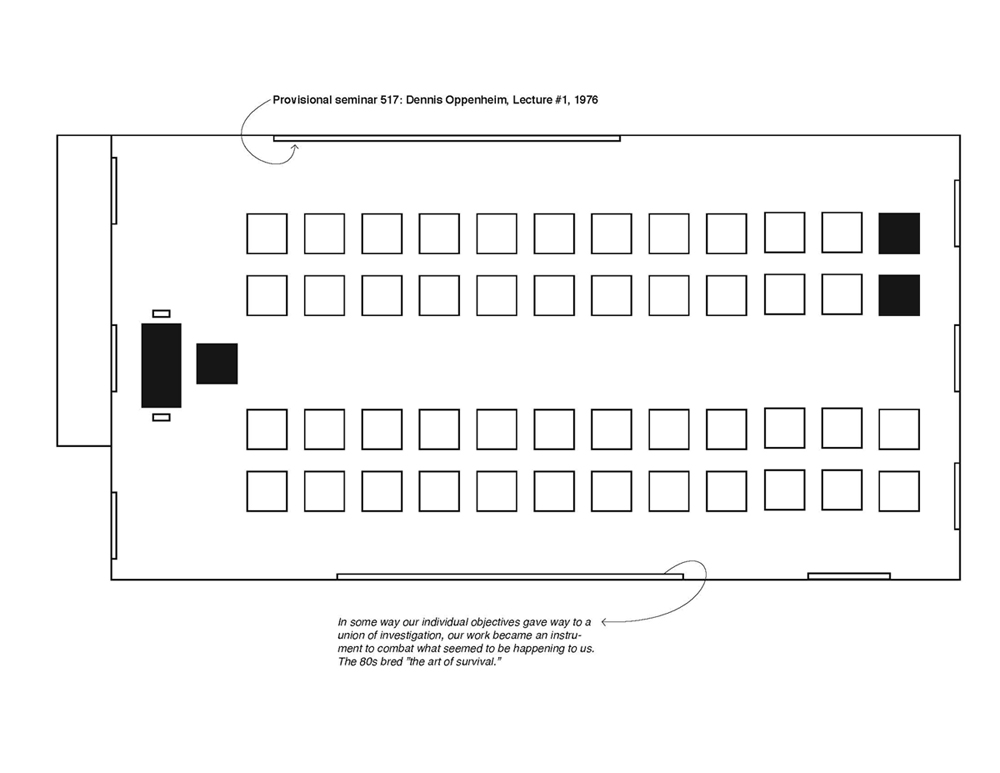 Floor plan for the reconfigured Lecture #1

After the lecture ended, the audience sat down. Les Levine, a central figure in New York during the 1960s and 1970s whom the art world has neglected, despite his important work in media art, presented an updated version of a work (I didn’t catch the title) with a simple premise. Seated at a table, he invites an audience member to come speak on whatever topic he or she wants to. Levine only can ask questions on what the participant has already talked about. Once a person leaves the table, another may approach it. For today’s seminar, three participants had been chosen in advance.

The cranky critic and professor Thomas McEvilley, who befriended Oppenheim in the early 1980s, was the first at bat. He emphasized how the artist’s Site Markers and Viewing Stations (both 1967) reversed the theory of art, and that Lecture #1 addressed the end of the avant-garde. McEvilley also spoke about Oppenheim’s break from art in the mid-1980s, in which a depression led to a period of solitude in which the artist didn’t make work but instead read numerous texts on postmodernism. 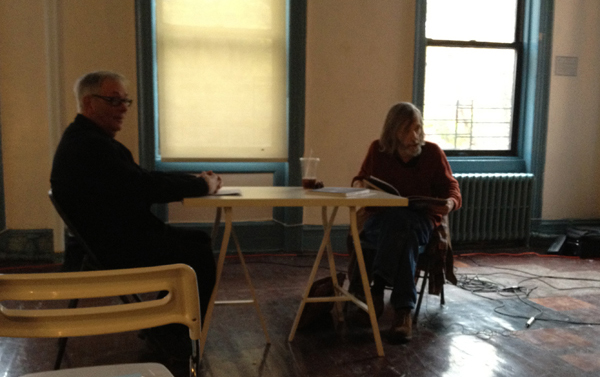 Thomas McEllivey, with catalogue in hand, addresses the audience (photograph by Christopher Howard)

Levine asked McEvilley why the avant-garde ended? It was postmodernism, he answered, that wiped out the avant-garde. He did not explain what this meant and began repeating himself: Oppenheim reversed the terms of art, postmodernism pulled out the rug from under everyone, the artist experienced a second-career comeback in the mid-1980s. McEvilley also mentioned that no New York museum has staged an Oppenheim retrospective, forgetting that P.S.1 Contemporary Art Center (now MoMA PS1) hosted one in 1991–92, that the catalogue published his essay on the artist, and that Ace Gallery presented a medium-sized survey in 2000–1 in its old, cavernous space west of SoHo, which received a mixed review from Michael Kimmelman in the New York Times. Despite all this, McEvilley is correct—a museum in the city that Oppenheim called home since 1967 should be preparing a retrospective.

McEvilley exited, and a British chap, Anthony Haden-Guest, took his place. Haden-Guest also wondered about the history of the avant-garde, which he said died in literature long before it did in the visual arts. Breaking his rule, Levine tried to steer the conversation back to the seminar’s topic, but Haden-Guest preferred to talk about Dennis as a person. A third speaker, the artist Roger Welch, said saw Lecture #1 as ironical, as a warning. Levine asked, “What do you think it’s about in his mind? Why choose that way to address this topic?” Welch suggested the work is a commentary on the artist’s lecture circuit and also being a performer. “If artworks are representative of the artist, how does this work represent Dennis?” It means that other people are pulling the strings.

As an experiment, Levine’s exercise would naturally yield unpredictable results. That said, the discussion might have been more interesting had he invited regular members of the audience to the table. Even if these other participants were not Oppenheim experts, their perspectives could have offered fresh ways of looking at the artist’s work and legacy. The good news is that the opportunity still exists.