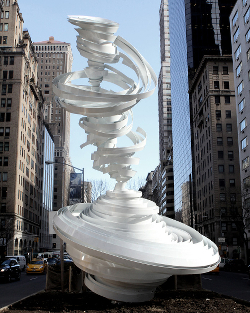 “Tornadic, whirling movement is something I’ve been involved in right now,” said Alice Aycock. “I’m not really into peaceful things.” This New York–based artist, who turns sixty-eight on November 20, said she trusts turbulence, not balanced or harmonious things, which is typical of her recent work, in particular Park Avenue Paper Chase, a series of seven sculptures on view in the median of an Upper East Side thoroughfare from March to July 2014. During her lecture at the New York Studio School, she talked about this work, her approach to art making, and more to a surprisingly half-full room of rapt listeners. (The audience was mostly middle aged and elderly—where were all the kids?) Aycock is positive, confident, and self-assured despite the precarious nature of the public-art commissions for which she regularly applies.

Aycock began the talk by reciting a condensed version of “The Aleph,” a short story by the Argentinian writer Jorge Luis Borges, but with her own twists: “I’ve changed it to say the things I want to say.” For her, the story exemplifies how Borges compares himself to Dante, his touchstone artist, as both an admirer and a competitor. Borges wanted to be as good as—or better than—the medieval Italian poet. The story also emphasizes the “tear,” which Aycock described as a breakthrough (in literature, visual art, or whatever) that pushes the discourse forward and creates a new thought. Creating such tears has been her goal throughout her career. She didn’t indicate that she has succeeded in making a tear—Aycock is a terrific but not highly influential artist—but her relentless pursuit of the tear is commendable.1 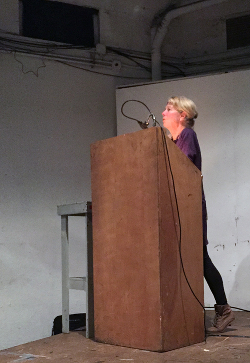 Alice Aycock at the podium (photograph by Christopher Howard)

Aycock aims to make an image in her work, not specific but generic. A seed image, she called it. Jeff Koons’s Balloon Dog (1994–2000), she gave as an example, offers a precise image: the shape of a dog created from twisted, inflated latex. Further, she pursues a state of becoming and transforming in her work, and not settling down. A recent outdoor work for the University of Cincinnati Medical Science Building in Ohio, Super Twister (2013), is meant to evoke tornados and whirlpools, and another, Ghost Ballet for the East Bank Machineworks (2005–7) in Nashville, Tennessee, took its inspiration from the bridges and trusses on the Cumberland Riverfront.

The artist described her process: working mostly through competitions, she researches images of phenomena online; develops a design for a sculpture on the computer, with an assistant; finalizes the image; makes a pitch (to a municipality, business, or school); and, if accepted, builds the work. At certain points she employs a structural engineer to ensure her idea can be realized. “I would rather dream up these things and not construction manage,” Aycock lamented, but she does so anyway. She also explained that she plays with and ruminates on a work’s design digitally—there are no maquettes or working drawings. Once she finalizes a piece on the screen—it’s done. 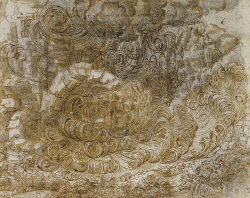 Returning to a discussion on her influences, Aycock said that “Leonardo was my Dante, in a certain way,” pointing to his series of deluge drawings in particular. She admires the Renaissance artist’s curiosity: “There’s nothing that’s taboo [for him]. There’s nothing he won’t think about.” Another touchstone work is Vladimir Tatlin’s architectural designs for the unbuilt Monument to the Third International (1919–20). “I love every time I see it remade,” she said. Later in the talk she described recent visits to eighteenth-century astronomical observatories: the Jantar Mantar in Delhi (1724) and in Jaipur (1727–34). These scientific structures, Aycock explained, allowed an stargazers to find a certain celestial bodies during particular times of year, but the Rajput king who commissioned their construction had actually wanted to know his fortune. Here, she continued, we have an interface between rational/science and desire/magic, which is also among her artistic pursuits.

The artist described important themes in her work, such as her longstanding interest in wind. Her first show, at 112 Greene Street in SoHo, featured Sand/Fans (1971). The piece recently sold at an art fair in Dubai, she noted, forty years after its initial appearance. Fashion is another influence, especially ruffles, lace, high collars, and petticoats. Rollercoasters are a third interest: she grew up near Hershey Park in Pennsylvania, which has the Super Duper Looper. The visual qualities of war strategy intrigues Aycock, as well as the idea that you plan so extensively only to see the fight erupt into chaos. These various qualities—including tornadoes, turbines, and a “small origami dress”—came together in Park Avenue Paper Chase, for which she created a visual narrative that progressed from East 52nd to 66th Street. “The wind creates forms,” she said of the painted aluminum and fiberglass works, “and also scatters them.”

The seven works—commissioned by the Sculpture Committee of the Fund for Park Avenue and the New York City Department of Parks and Recreation, and funded by Galerie Thomas Schulte in Berlin and an unidentified German investor—are still for sale: “If you want one for your garden, I’d be happy to drop them off—tomorrow, in fact.” Later in the talk she hinted that the series didn’t turn a profit. Aycock said she loves to win competitions, to sell work, and get out of debt, but she makes art because she has to, to come to grips with what she doesn’t understand. She joked that Frank Stella always wins the commission when both artists compete for the same prize. Stella won’t talk to her, she joked, not even when riding together in an elevator. “If he could just say ‘Hey Alice, I won!’” 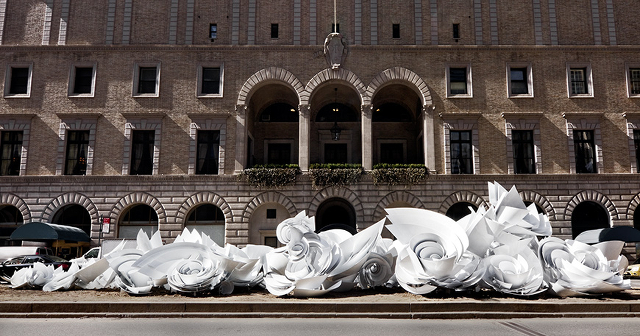 Despite having recently erected outdoor sculpture all over the country, Aycock said, “If you do them on Park Avenue, you’re suddenly back in the game.” Her presence in Manhattan is understated, to say the least, even after Alice Aycock Drawing: Some Stories Are Worth Repeating, a two-museum retrospective that took place last year at New York University’s Grey Art Gallery and the Parrish Art Museum on Long Island, which admittedly are not the highest-profile venues in the area.2 “I love New York,” she said, “but it’s a really hard town.” People will pay attention to you “maybe for five minutes, maybe for ten.”

It’s certainly not easy when you’re making public art, an area in which even prominent artists such as Aycock, Dennis Oppenheim, and Vito Acconci spent years struggling. She admitted that her work is placed in banal locations, such as schools, community center, and airports. Aycock recently faced a legal battle with the custodians of John F. Kennedy International Airport’s Terminal 1, which wanted to dismantle her work Star Sifter (1998). Despite getting press about the fight in spring 2012, the artist said, when the decision was to relocate and reconfigure the work, no article was written.3

During the Q&A, an audience member asked about the difference between drawing on computer and by hand. “On some level I cannot draw,” Aycock conceded, recalling her “knee-jerk rejection of perspective” when she was younger. Besides, she said, her teachers had been Fluxus artists, so you know technique was thrown out the window. At New York University, however, she took a class in which students were instructed to draw in the style of particular artists. “I was okay at it,” she said but eventually fell in love with compositional systems.

Aycock taught herself drawing in isometric projection, an architectural style that emphasizes scale, measurements, rules, and templates. Knowing precise measurements for her sculpture has helped her tremendously when ordering materials at the lumber store. In the mid-1990s, Aycock noticed that draftsmen began moving to computers, where a designer can enlarge or shrink an object, or rotate it, with tremendous ease. Adopting digital tools years ago, she can alter an image easily to “get exactly what I want.” Aycock never shows her shop drawings in exhibition, but instead makes hand-colored drawings for display, such as those in the Parrish Art Museum show, which covered 1984 to the present.[4] “I want the control back,” she said.

1 Aycock is a longtime professor at the School of Visual Arts in New York, as well as at Maryland Institute College of Art in Baltimore, so her influence may be more pedagogical than aesthetic.

2 The exhibition traveled to the Santa Barbara Museum of Art and the Art, Design, and Architecture Museum of the University of California, Santa Barbara, where it was on view from January to April 2014.