In Defense of Democracy 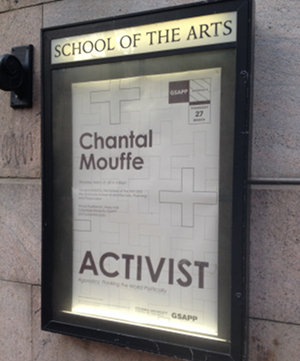 “People have lost faith in traditional democracy,” said the Belgian political theorist Chantal Mouffe. “They have a vote but not a voice.” But rather than call for revolution, she emphasized the need for better, more inclusive representation within institutions of power, such as when which leaders “come to power through election in order to implement a set of radical reforms.” Mouffe, a professor at the University of Westminster in London, is a hero in certain circles, and this lecture, presented in collaboration with Columbia University’s Graduate School of Architecture, Planning, and Preservation, offered her the chance to elucidate her views for a diverse crowd of students, professors, art workers, and activists.

Mouffee summarized recent philosophical challenges to neoliberalism, running through the basic ideas of theorists such as Nicholas Bourriaud and Paul Virilio, Luc Boltanski and Eve Chiapello, and Michael Hardt and Antonio Negri, especially concepts from Hardt and Negri’s book Empire (2000), such as “multitude,” the new term for the proletariat, Mouffe said. She posited that we’ve gone from disciplinary society of hospitals and jails to a society of control, that is, one of biopolitics, immaterial labor, and communications. The multitude uses communications to express itself freely: these subjects are active, not passive—a concept in which neoliberals and capitalists, whose globalization efforts have liberated them from modernity, would delight. In an absolute democracy, according to Hardt, Negri, and friends, minorities in the multitude would never aspire to form a majority or a state, but rather a common. This is liberation, not emancipation, Mouffe said, and it denies a hegemonic structure’s role in power.

Mouffe reaffirmed her ideas about agonism—a political philosophy she has long promoted—by emphasizing that change comes from working with and within institutions, transforming and improving them over time. (Agonism posits that political struggle based on difference and diversity can be passionate, constructive, and respectful, in short, confrontation is good.) This is a passive revolution and organic change, to borrow concepts from the twentieth-century Italian theorist Antonio Gramsci. Even though the idea of swift revolution is enticing, representative democracy should not be abandoned or replaced. One gets to choose real alternatives, Mouffe said, in agonistic debate, which engages institutions instead of rejecting, resisting, or replacing them. “Pluralist democracy cannot exist without representation,” she said, expressing a point of view that, according to Slavoj Žižek, presupposes democracy is an idealized, optimum political form that cannot be questioned.1 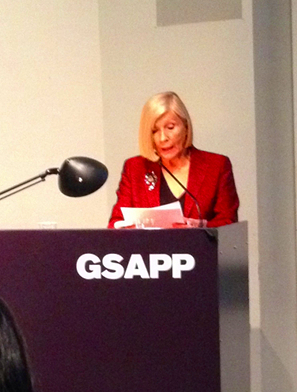 Mouffe generalized about the role of aesthetic practices, stating that art which transforms political identity and modernizes affect is good. So is art that allows for other voices. Radical breaks in art and the tabula rasa, she continued, ignore the importance of incubation and deny the function of influence. Transgressive art, Mouffe declared, is not the most radical kind, and harboring the illusion of art being subversive has inevitably caused the avant-gardes to fail. For her, art should contribute to a multiplicity of sites and—leaving arguments about framing, context, and validation aside— take place both inside and outside the museum. During the audience Q&A, the art historian Terry Smith requested examples of such works of art. Mouffe was hesitant to offer names but eventually gave two: an unfamiliar name [pronounced “eh too jahr”] and Krzysztof Wodiczko.

As one would expect, the Q&A session was a mess of convoluted comments disguised as questions. A man dressed like a Trader Joe’s cashier bloviated for several minutes about episodes in twentieth-century global politics before blurting out, “It’s not cool to talk about the communist party.” Mouffe responded by asking him where and when a communist revolution has succeeded. There are failures but also hope: “We have to keep trying,” she encouraged. “It’s a long process.” Indeed, I often think about how, in the United States, one hundred years elapsed between the Emancipation Proclamation and the Civil Rights Act of 1964. Mouffe said that progressive political heroes of the past probably never realized how the “social rights of the welfare state could be dismantled,” as they have during the past couple decades under neoliberalism. Taking an agonistic stance, she fears that protest movements won’t succeed because they’re contesting existing institutions with the goal of deposing them. While I tend to agree overall that real change happens slowly, radical points of view—such as Occupy Wall Street—serve a crucial function of yanking political conversation into a certain direction. And some institutions—especially in the art world—would better serve their constituents if they were gutted completely.

1 Slavoj Žižek, “Have Michael Hardt and Antonio Negri Rewritten the Communist Manifesto for the Twenty-First Century?” Rethinking Marxism 13, no. 3/4 (2001).